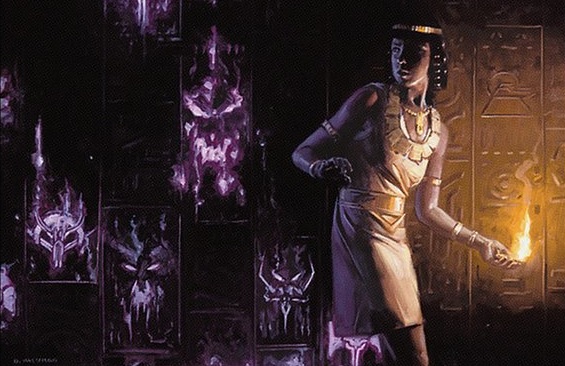 Those who are doomed to fight are doomed to die. But if you’re prepared to die, fear quiets to acceptance, and the battlefield changes.

Welcome to the latest episode of Dual Shot, where we brew two decks at the same time… in one deck.

This time, we’re hiding a Forced Combat deck inside a Curse deck, driven by a heavy statistical overlap in play with cards like Curse of the Nightly Hunt, Sphere of Safety, and Gahiji, Honored One – along with many others.

In a very real sense, these two themes are two sides of the same coin. Forcing combat disincentivizes opponents from attacking you, and Curses incentivize them to attack elsewhere. A purer approach to either of these archetypes invariably yields some overlap anyway, so why not commit to noncommittal? The style of no style could be argued to be optimal, and being able to adapt to a changing battlefield – or a political landscape – could be your way out.

But don’t rely on hope, or on some survival instinct. Recognize that you will die, and embrace the melee.

And No, Not That Arena®

Feel free to embrace the newest digital platform, but 1v1 is a bit too scary for this deck. What about all those martial arts metaphors I’m always so keen on? Uh, well, maybe this deck is more on the trash talk side of things, and wilts a fair bit when the violence is directed its way. As Iron Mike said, everyone has a plan till they get punched in the mouth.

So don’t get punched in the mouth. Hey, that guy called you a jerk, are you gonna take that? Ah, so maybe it’s not about trash talking in itself, but more about fomenting trash talk amongst the other players. I almost hesitate to run Smothering Tithe in this list, as you’ll see later, simply because it tends to attract a lot of attention. We do need some mana fixing and ramp, though, since this is a five-color deck helmed by O-Kagachi, Vengeful Kami.

But again, all that talk of battle earlier on was just a lot of pomp, and that big Kami is secretly kind of a coward. It’s unlikely that we’ll get the chance to counterpunch with our polycephalic Dragon Spirit… unless we opportunistically intercept an opponent’s strike with our face.

Note that I don’t recommend this strategy for an actual fight.

While there is a lane for accepting (or manipulating) the combat that comes our way thanks to cards like Bitterheart Witch, Thantis, the Warweaver and Kazuul, Tyrant of the Cliffs, more often we’ll be avoiding that, hiding from the fray in our Sphere of Safety. It’s cozy in there, and even has some added redundancy in the form of Windborn Muse, Baird, Steward of Argive, and Ghostly Prison.

And while we provide plenty of battle fodder with Hunted Phantasm, Goblin Spymaster, and Varchild, Betrayer of Kjeldor, and we have numerous Goad effects, about 60% of the deck is geared towards cursing our opponents. Idyllic Tutor, Heliod’s Pigrim, and Bitterheart Witch (with a little nudge, anyway) all help us pick and choose what flavor of curse we need in the moment. Curse of Misfortunes takes this selection to an extreme, and if left unaddressed for more than a few turn cycles, will often win you the game through attrition. That’s the sort of vengeance that should placate the old Kami.

Exotic Curse won’t do much work for you, even though we have a number of basic lands in the deck. It was a flavor inclusion, and if you prefer the taste of winning, then consider the following: although this deck is a joy to play and pilot, it is barely scratching the surface of battlecruiser Magic. It simply does not have enough removal, and does not usually present threats at a meaningful tempo, and relies overmuch on politicking. Not even the Group Hug kind of politics – truly, the charisma-required “have you considered attacking someone else” type of politics. (Note: this isn't to say Group Hug doesn't require charisma; in fact, it might even require actual Machiavellianism.)

It is a five-color deck, however. Exotic Curse needs to go, and those basics, as well as Terramorphic Expanse, Fabled Passage, and Evolving Wilds, should all be replaced with shocklands if able, and a Mana Confluence or a Gemstone Mine if you’re feeling opulent. The basic land fetches are helpful, but as you can see, there are often better options.

As well, Curse of the Pierced Heart is… bad. And I’m quite sure I put it in the deck because it said “Curse” on it. I did ignore several curses that attack your opponents’ libraries, simply because I did not envision mill as a viable option when melding the Dual ShotTM of the deck. All this to say that there are a few slots that are begging to be replaced with better interaction, board control, and emergency outs.

But what remains in the brew is surprisingly and enjoyably effective, should the stars align. And given our handful of enchantment tutors, sometimes we can smudge the telescopic lens and make the stars align ourselves. Curse of Death’s Hold can board wipe indestructible pests, making it a meaningful pick through Curse of Misfortunes. So long, Thopter Assembly! Darksteel Forge be damned.

Curse of Exhaustion can quell a storm, Curse of Oblivion can quiet the old lichyard. Curse of the Cabal can put some heavy pressure on your opponents, and Curse of Thirst can knock a player out of the running. Cards like Curse of Echoes, Curse of Inertia, and Curse of Chaos can make the game, well, uh, weird. Which makes for great fun! Sometimes you’ll make a hideously sticky web of incentives and caveats for each combatant – a web whose strings only you can pluck. And sometimes you give an opponent access to their best cards and combos. Also, the word “curse” stops sounding like a real word.

That’s it for this installment of Dual Shot. Did the battle fill you with fear? Or had you already prepared to die, allowing yourself to Clear the Mind? Tell us below about the games you’ve played where things got out of hand. And, won or lost, how you managed to calmly navigate the chaos.