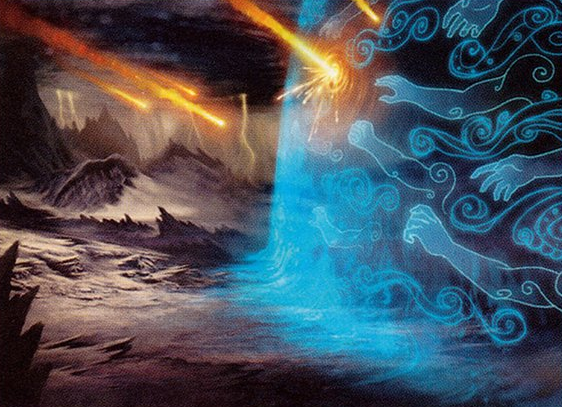 We find ourselves in a meandering place, one where the subtle shifts of earth lead our thoughts to wandering along with our legs. A place where history, mythology, and imagination all meld together in a blur of paint on the canvasses of culture.

This time, we'll be considering a list led by Kynaios and Tiro of Meletis, a fairly popular commander, though, in the context of its peers, one that's often underutilized, in comparison.

Now, in a more focused and levelheaded write-up, we might explore the inspirations of Kynaios and Tiro - historically speaking - and lean into the Tyrannicides or the Sacred Theban Band, and their reflections in Theros. But no: I'm veering off into another plane and peering through a much more distant lens. So despite our Therosian commander(s), we'll instead be scrying at the great Indian subcontinent for ideas - the inspirational spark for Kaladesh.

One of the avatars of the supreme being is Kurma - the tortoise whose many domains include the churning rod of the Ocean of Milk, vegetal life, arteries and nerves, steadfastness... and countless others. The sphere we're interested in, however, is yajna - that is, the sacred flame and the acts before it. It is in this incarnation that we see the fire tortoise.

From here, we can begin to make sense of the duality of our deck. This is a burn deck inside a Wall tribal deck. We will play defense, turtling, deflecting, withstanding - while simultaneously keeping pressure on opponents with scalable noncombat damage and even discouraging retribution though the innate group hug built-in by our general. This is about as antipodal as Dual Shot gets, folks.

We talk about "bridge cards" on here with some frequency, either seeking them out to ford disparate concepts, or else starting with them as the foundation of these two-headed decks. In this list, the most apparent are cards like Electrostatic Field, Vent Sentinel, and even Earthquake, for its provision of scaling to our needs in any given board state. Wipe out our opponents creatures while retaining our high-toughness defenders? Sure. Pumping it up with Seething Song to stir your own Hornet Nest? Wonderful.

If you're going to try to win with Heartless Hidetsugu and Furnace of Rath, make sure you have The Wanderer in play lest you risk forcing a draw. Otherwise, sudden combative turns with Tower Defense, Assault Formation, and Arcades, the Strategist can turn the tide in your favor. Meanwhile, Mark of Asylum, Pramikon, Sky Rampart, and, you know, a dozen other Walls, can stop the tide altogether.

Manabarbs is a great inclusion, but it might attract too much attention, even considering that your opponents might want to keep you around for Kynaios and Tiro of Meletis. At any rate, Wall of Shards certainly won't be enough in the way of politicking your way out of the spotlight, should it land on you. Another great inclusion is Fortified Area, but, oh no, I've gone cross-eyed.

We do buy ourselves a good bit of time with our cheap defenders gumming up the board, and with Wall of Mulch or Arcades, the Strategist, we can continue to draw into and replace our blockers. And Overgrown Battlement and Axebane Guardian should help us pay for what we need. Fortunately, the average mana value of our defenders is comfortably below 3 CMC, so despite some demanding color pips, costs aren't too oppressive here, even in four colors.

Fiery Emancipation is a great upgrade to one of our damage-multipliers, say, Furnace of Rath for its oppressive color cost, or Angrath's Marauders for its mana value of 7. Just don't try to slot in Tree of Perdition hoping for a quick burn victory, because that card is not in our color identity, and it costs ten dollars, haha, oops.

Anyway, this all makes for a deck that's deeply at odds with itself in the best way possible. It's fun not knowing if you'll draw into fiery offense or something to shell up with and play defense, and, like the fire tortoise, this deck is slow and steady until it isn't.

That's it for this... 20th installment of Dual Shot! That's a milestone, one should think. In the length of this series, if it served its purpose to entertain and inspire and play with the spirit of place, what wacky strategies have you since juxtaposed into one pile? When have you gotten that forced combat tech to work from inside your pillowfort? Or perhaps you have a Strixhaven-ready artifact brew that's actually Spirit tribal? Tell us about them in the comments! Until next time.