EDH Benchwarmers — Kaalia of the Vast 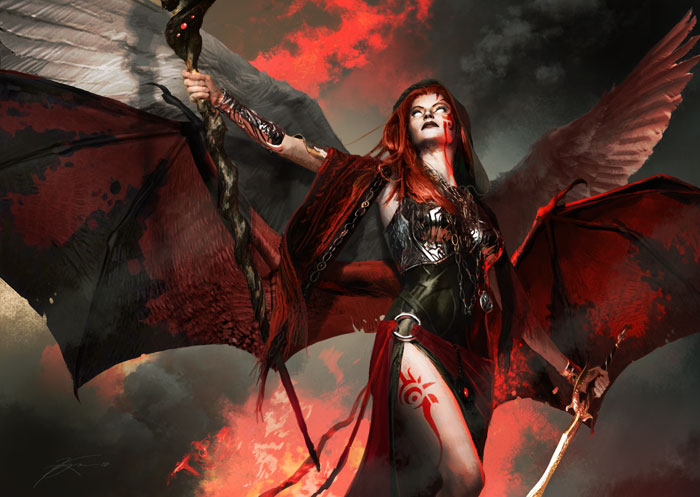 We did it, we found an actual theme for my article series. People seemed to dig the idea of the “Better Version.dec” from last time (Teneb instead of Karador) so, the EDH Benchwarmers series is born. A quick word about what it means to be a “Benchwarmer” before we begin.

Benchwarmer is without a doubt an insulting term. It means instead of getting to play out in the field or on the court (or rink if you're in Canada) with the rest of your team, you're forced to watch from the bench, in purgatory - a seemingly endless waiting room aching for your chance to play. But unlike sports, the popular cards won't get injured, engage in contract holdouts or get fined and become a benchwarmer themselves for missing a practice. (We talking about practice?) No, your cards are as good as the day you got them and unlike the real world, they won't need to be replaced with worse versions of them for any actual reason. But none of this means that those cards (or players) on the bench are bad, in fact some of the greatest players of all time were benchwarmers who finally got their shot in the big game. Who knows, is that Skyblinder Staff in your bulk box the equivalent of Brett Favre playing for the Falcons? (Hint: No, it is not.) Don't be alarmed by the sports references, I don't know anything about Football, I'm Canadian.

This series uses established decks and commanders, but uses the so called “sub-optimal” cards to make the lists complete. There is one rule: no cards from any of that commander's sections on this very website, EDHREC. None of the most used cards - including lands - may be added to these decks. These are 100% cards that missed the EDHREC cut at the time of publishing and are proud of it.

This week we give the benchwarming treatment to one of the most popular and streamlined commanders out there, Kaalia of the Vast.

Making a Kaalia deck is one of the easiest and most boring things to do in EDH and it goes something like this:

You could stare at this image for 22 hours and it would be the same as watching a whole season of this show.

Those steps used to build a Kaalia deck aren't wrong or anything, they're just so formulaic because she's a general that wants you to do very specific things. So the least we can do is find some other ways to do what she wants and allow it to happen. According to EDHREC that means no Avacyn, Angel of Hope, no Rune-Scarred Demon and no... Mardu Banner? Really? Guys you're doing half the work for me here. One great thing about building an alternate Kaalia deck is that there are a TON of other Dragons, Demons and Angels throughout Magic's history. Instead of Baneslayer Angel toss an Exalted Angel in there. Avacyn, Angel of Hope is super expensive and is in every single Kaalia deck I've ever seen, so mix things up with a Deathless Angel. Here's the full list so you can get an idea of what we're talking about here.

The classic Kaalia categories are all here, just slightly tweaked. We've got angels like Angel of Jubilation, Dawnbreak Reclaimer and Herald of the Host – we even have an Avacyn! Sure, it's Avacyn, Guardian Angel but it is still Avacyn. That's all that matters!

We've got Demons, just sort of not as good ones: Abhorrent Overlord, Xathrid Demon and reaching way back for Pit Spawn. You might balk at the idea of including something with an upkeep cost but one of the huge benefits of Kaalia's ability is you're not spending your mana on these huge creatures so you've got lots of mana just lying around. Look at it as our version of including Armageddon in the deck... sort of. Of course we also have plenty of half-decent dragons like Warmonger Hellkite, Thunder Dragon and even the french sounding Mordant Dragon which, no joke, translates to English as “Zesty” Dragon. Zesty Dragon you guys. You're all welcome for identifying yet another creature for your nacho and Dorito-tribal decks.

Of course building a Kaalia deck is more than just replacing your Utvara Hellkites and Bloodgift Demons...we need to replace everything. That means new mana rocks. This is an interesting category, because it seems everyone has agreed that the default best mana rocks are all anyone can ever and should use - but there are many different choices of mana producing artifacts that have their own unique benefits that opponents may not see coming. It's a lot like how everyone just shoots Robocop in the chest when they aim at him but what they really need to do is shoot his lower-face. Ok I guess it's not exactly like that, but maybe a little if you kind of don't think about it too much. Just shoot him in his mouth!

Robocop weak points aside, Spectral Searchlight is one of my favourite mana rocks in EDH. The ability to occasionally help your opponent out by giving them the one extra colour of mana they need is rarely useful, to be honest, but it does come up sometimes, and when it does you'll feel like a master politician, bending the hearts and alliances of your group to your will. So while you can't draw a card from it, and it isn't indestructible, it still does what you need it to do plus a bit more so always tap this one last! Cultivator's Caravan, Worn Powerstone and the classic Manalith round out our actual rocks with Renegade Map and Sword of the Animist helping us grab some basics to fix our colours and ramp accordingly.

Looking at EDHREC for Kaalia's deck lists, I noticed a lot of people love using Path to Exile and Swords to Plowshares for removal. Undoubtedly these two cards are true celebs in the MTG card world, but for every true celeb, you've got your knockoff versions hanging in the back somewhere waiting to swoop in on discarded scripts and job offers. You know, kind of like how Skeet Ulrich and Gary Busey do that to Johnny Depp and Nick Nolte. Well consider Crib Swap as the poor man's Path or Swords - the still very effective Chris Tucker to Path's Chris Rock. This deck is all about the poor man's version of cards, but having those cards actually turn out to be massively effective. Take General's Kabuto for example. Somehow not on the most played artifact list for Kaalia, but it certainly deserves to be. Protection in every sense of the word, you'll be swinging freely with big K and tossing down decently fine creatures en masse.

Other massively effective cards you don't normally see are Greed, Palace Siege, Dark Petition and Ankle Shanker. All of these cards make a strong case for going in any Kaalia deck, and not just this rag-tag bunch of misfits version. Palace Siege is one of the best commander cards ever printed. Period. It not only draws you an extra card each turn, that card is guaranteed to be a creature and you get to select which creature it is from your previously perished ones. Even if you don't have a strategy that revolves around the graveyard, your creatures will die and Palace Siege will get them back.

Kaalia decks tend to all look and play the same, and while it may be difficult (and pricey) to play a different strategy with her as your general, you can make the deck look a little different by spicing things up with your own flavor and style and maybe even catch some of our opponents off-guard.

#benchwarmers, #kaalia of the vast, #mardu