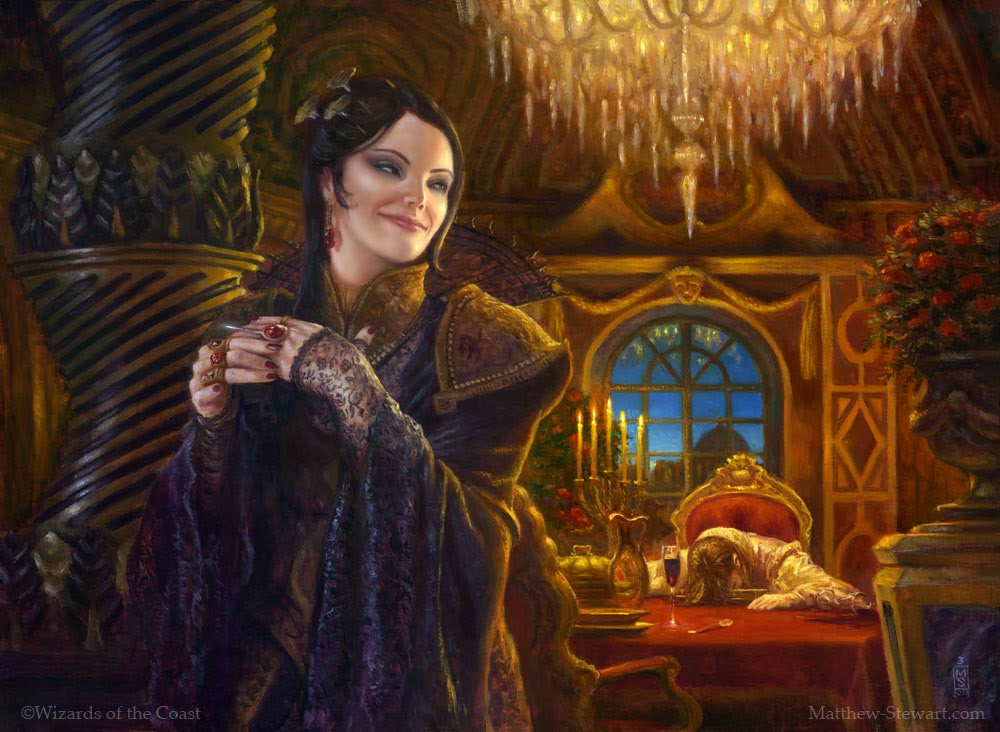 Hey everyone welcome back to EDH Benchwarmers with your host Andy Hull. Last time we really leaned into some pretty deep Van Halen references talking about a deck that was all about Roon of the Hidden Realm, and I guess somewhat about 80's hair metal and partying way too hard on the Sunset Strip. Is this cool again yet?

This week we take a break from the blazing guitar riffs of all things Bant and delve into the low bass-ridden tones of the Grixis shard with a "predictable" yet very powerful commander, Marchesa, the Black Rose. If I told you I was running a typical Marchesa deck and you tried naming the 60 cards I used, odds are you'd probably get about 50 of them right. Mikaeus, the Unhallowed, Unspeakable Symbol, Carrion Feeder – there's just a certain way to make this deck. Sac outlets and +1/+1 counters. It's fun to play and quite powerful, but it gets old and becomes pretty repetitive.

So as we do here at EDHREC every two weeks, let's toss our starters in the garbage. We're cutting the all-stars and bringing in the second string, the backups and the backups' backups. No card on EDHREC.com's Marchesa page can be used in this deck. That's the restriction. So, that being said, can we make a functioning Marchesa deck without Ashnod's Altar and Chasm Skulker? Let's take a look. Big Baddie Squiddy Daddy. I've been saving this name for a swing band but now's the time to break it out.

Roon was a difficult benchwarmer deck because our ability to blink at instant speed was severely limited if not completely taken away. I had a feeling Marchesa would be as hard or harder to build, because it seemed like all the good cards were taken, but boy I was wrong. Turns out there are a million ways to sacrifice a creature and give them +1/+1 counters which is all you want to make happen in this deck anyways.

The deck's process turned out a bit like the remake of Dawn of the Dead. Not as good as the original, pretty different and sort of unnecessary but in the end it's a bit of fun that you maybe didn't mind messing with for over an hour and both versions involve some zombies. Let's look at the decklist!

As I mentioned, in order to make Marchesa shine you want to take advantage of sac outlets. Get that value by murdering your own guys, much like Sarah Polley does to her daughter and husband once they go bonkers, zombie style. Usually the sacrificing is accomplished with super efficient outlets like the aforementioned Ashnod's Altar, Carrion Feeder or Viscera Seer. But this time around we have to use clunkier versions like Lyzolda, the Blood Witch and Phyrexian Broodlings. We do, however, get to keep one gem because apparently the rest of the world doesn't get how good it is yet and that gem is Flesh-Eater Imp.

Flesh-Eater Imp is a free sac outlet that pumps itself and has infect. It has infect. I said that part twice because that's kind of a big deal. I've won games where swinging once or twice with a beefed up Imp either from sacrificing things or just putting some counters on it cases enough infect counters that they choke on their own rage like I'm guessing George Romero did when he saw what Zack Snyder did to his 1978 classic story and satirical masterpiece. It's a threat that your opponents have to deal with as soon it hits the table, but luckily this deck makes dealing with threats a full-on mall-living nightmare.

Speaking of which, in order to create your opponent's living nightmare of trying desperately to permanently remove your creatures but failing, we need ways to throw some +1/+1 counters on these creatures. Aside from Marchesa's excellent ability granting all her pals Dethrone, we have no Unspeakable Symbol or Mikaeus around to help so we need to use a few lesser-known options. Dragon Blood provides us with an instant speed and repeatable way to add +1/+1 counters, but it is fairly expensive and anything similar is hard to come by. Feast on the Fallen only puts counters on one creature per upkeep if opponents took damage, which doesn't sound exciting but it does happen every upkeep. So in order to make sure our creatures have counters on them, let's just leave it up to them completely. I like Simic Fluxmage a lot for this job, because not only does it get its own counters from Evolve, it can place them on other creatures at instant speed. The fluxmage is a very underwhelming card in most EDH contexts but for Marchesa he's a (second team) all-star.

Vampires also do a decent job of getting their own +1/+1 counters figured out so Falkenrath Marauders and Garza Zol, Plague Queen as well as Vampiric Dragon and Mirri the Cursed are all easy fits. Hamletback Goliath and Taurean Mauler are guys who seem to accumulate counters easily, not to mention creatures that just enter the battlefield with counters on them from the start like Stingmoggie and Helium Squirter. The squirter is especially good because graft is an ability that is absolutely amazing in this deck. It's an automatic counter on the best thing that comes into play for you over the next few turns, then you can sac the creature with graft and do it all again. If you're playing against Marchesa and you see a creature with graft hit the battlefield, it's a true nightmare so KILL IT WITH FIRE.

So while we are definitely not treading any new ground with this deck strategically, we're looking at doing things in a slightly different way and that requires us to adjust to some different strategies at different points of the game. Is it better? No, but it's different and it sets your opponents off their guard. Tell them it's a benchwarming deck, feign weakness and then strike them with a massive Hamletback Goliath that you Rogue's Passage-ed... nevermind we can't use Rogue's Passage. Well, just get in with all your creatures once you have the engine going of not caring who or what they kill.

Of course it can be a little while before your engine is ready to roll. The fatal flaw of what essentially is a combo deck is the required initial setup. You have to find the pieces or else you're doing nothing. So we have our commander, now we just need a source of counters and a sac outlet. Naturally the draw engines in these colours are good, yet we can't use any of the old standbys. However EDHREC does allow us to use one classic in Rhystic Study. It's like the shotgun, ever present in whatever terrible or acceptable remake of a zombie movie that comes to mind. So along with Study, we have the (hopefully) rucurrable Youthful Scholar, the slooowww Staff of Nin, Sphinx of Magosi, Bident of Thassa and... Ordeal of Thassa? Yeah, the Ordeals do double duty in this deck and while they're not great, the blue one gets you cards and the red one kills a utility creature all while protecting the creature they're on if you've cast Marchesa. It's a bit of a stretch but hey, so was casting relatively unknown Canadian actress Sarah Polley for the good people at Universal back in 2004. Hey, Sarah Polley went on to become a well-respected director in the Canadian film industry. She's a bit of a national treasure around these parts SO LAY OFF.

So all the pieces are there, Zombies, Mall, Guns, Canadian character actor Boyd Banks, Zack Snyder really messing with the colour filters on the camera for some reason, jeez that guy bugs me you know? Sometimes I just wanna- NO! That's not what this is about. This is about showing that original Marchesa doesn't need to have the same cards in every deck. EDH is about discovery, so don't be afraid to branch off in all new directions or even just tweak an existing direction with all new cards - whatever fits your playstyle. There are definitely many ways Marchesa can be built and still remain competitive and fun. Rogue or Vampire tribal, benchwarmer, stealing creatures with threaten effects, even classic Grixis zombies work really well with Marchesa's ability. So if you drafted Conspiracy and have a Marchesa lying around that you didn't feel like building, do her a solid and call up a few kids from the farm team and blast some running zombies in the face while Makei Phiefer's wife gives birth to an undead evil zombie baby.

Can we get a Magic card just called Zombie Baby? Please?

[Editor's Note: Your wish is my command!] Let me know in the comments below if I left anything out or what you think of Zack Snyder and the Dawn of the Dead remake. I'm sure we can have a calm rational discussion about Zack Snyder because I know the internet is known for that. Also come check out The Commander's Brew EDH podcast over at Commandersbrew.com! Thanks gang seeya next time!