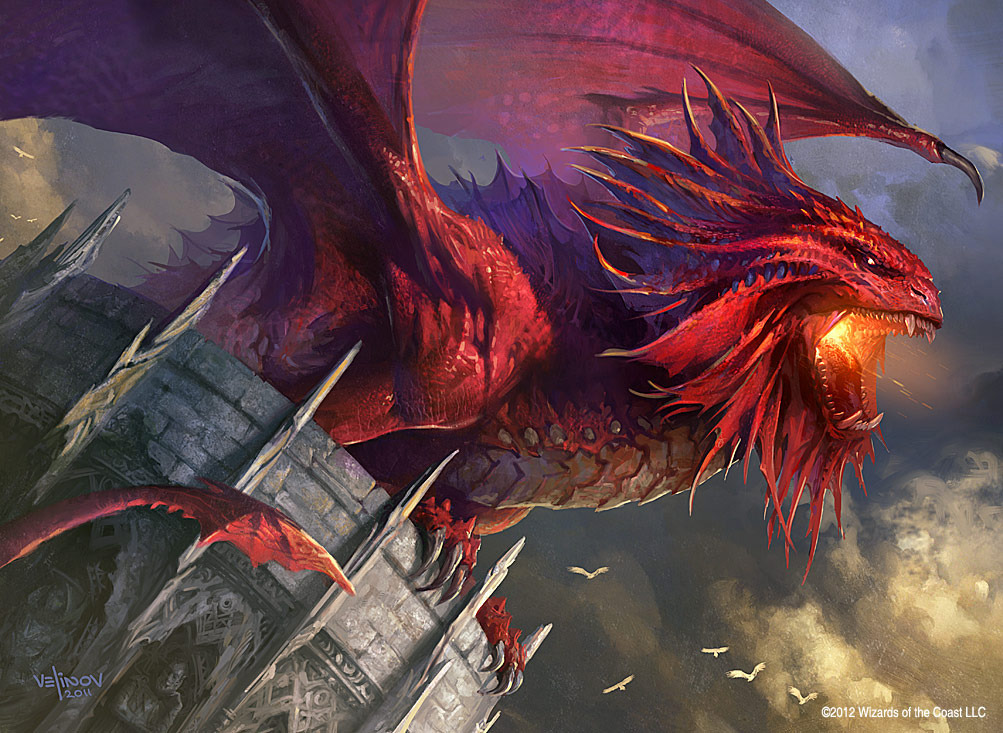 Oooooh, the Firemind. What, am I supposed to be afraid of this guy? Niv-Mizzet is a massive dweeb and we all know it. He may look like a super rad dragon with wicked cool frill-things around his head and very intimidating wings and everything, but NM is really just a super nerd, and not even in a cool way. I'm telling you, no matter what some Vorthos expert of Magic lore tells you Niv-Mizzet is one of those brutal guys who tries to cheat at games and pull stuff like “nowhere in the rules does it say you can't play two decks at the same time as long as they're legal” even though the rules fully say this isn't so.

So, basically, we have to teach this guy a lesson, and what better way than to subject him to the EDH Benchwarmers treatment? Oh, your decks usually contain the best draw spells in Magic's history? Guess what? Now you have to use Monastery Siege. Sorry you're used to running any counter spell you want, and they're all very mana efficient? Have fun with some card I found called Vex. No Psychosis Crawler for you this time Niv – and don't even think about going infinite with Curiosity or Ophidian Eye. If you're gonna win with this deck, you've got to do it the super hard way: with slightly worse cards than usual.

The cards that Niv-Mizzet misses the most in the benchwarmer brew are probably the draw spells. No, actually it's the counter spells – well actually if you look at the ramp it's pretty bad in this... wait... lands. Because Izzet players are ON IT, we basically can't play any dual red/blue land. Not even a Guildgate or those other Guildgates that came out in Shadows Over Innistrad. We're talking BASICS. MANY BASICS. Forget entering the waterworks through this giant purple pipe

OK, that's not so bad, really. The deck is mostly blue, anyway; with a decent splash of red. No big deal, right?

Let's talk replacement card draw. Rhystic Study, Blue Sun's Zenith, basically any Wheel of Fortune effect you can think of, are all off limits. So we have to turn to things we're not exactly used to running in Commander. One exception to this is Mind's Eye. Eye is and always will be an excellent draw spell. It's easily one of the best cards in our deck, and I'm pretty surprised we don't see this card on EDHREC. I guess when you have every draw spell imaginable at your disposal, a few sweet ones are bound to slip through the cracks. Other notables in this deck include Dragonlord's Prerogative, which gets the pretty useless boost of “Can't be countered” if our boy Niv is on the battlefield, or is somehow in your hand. Another card that slips through the EDHREC cracks is Mind Spring. A nice draw X spell we're happy to have since almost all of our others ones are off-limits. Finally, we've also included Ugin's Insight and a great mix of the things this deck wants to do: Control and Draw, Overwhelming Intellect. I can just picture Niv-Mizzet sitting across from you like the guy in the Magic episode of South Park holding up a finger going “wait” after you cast your commander. “Wait! Overwhelming Intellect. Draw 6”. What a smug look he'd have, too. Oh, this guy would just sit there and grin when a strange hologram of ancient symbols surrounds his face

Speaking of a smug dragon countering all your spells, that may well be what happens in a normal Niv-Mizzet deck, but that's going to be a bit tougher to pull off in our benchwarmer version. Don't get me wrong, we still have access to some decent counterspells, but we can't really hope to hit critical mass from the bench. Dismiss, Dissolve and Vex are all solid options, and we even run Commandeer just in case something happens and we need a mush worse Force of Will.

One thing this deck gets a surprisingly fair amount of access to is spot and mass removal. I guess in a regular Niv-Mizzet deck you're more concerned with countering things. Which is fine, but I like a healthy mix in my control decks, and the fact that we still have access to cards like Wash Out, Whelming Wave, Reality Shift and Rapid Hybridization means that what we lack in counters we make up for in these other effects. Not that I want this giant iguana to be able to gloat over my lifeless wizard-body after a game of Commander, but we have to give him a chance, right? Lucky for him we've also managed to find some solid creatures that help out this spell-heavy deck. Dragon Mage and Runeborn Hellkite give us access to Wheel effects that I guess the average EDHREC user doesn't think of. Jace's Archivist also provides us with lots of drawing. One of my favorites here is Diluvian Primordial. With all the discarding from the previous cards, graveyards will be nice and full and when the Primordial hits it's usually with three or four excellent spells along with its sizable 5/5 flying frame. Kefnet the Mindful is a new addition that I think works very well in this deck, and since we can't use the new Enigma Drake we'll have to settle for the original Spellheart Chimera. Some other standouts are Mnemonic Wall, Illusory Ambusher and Nin, the Pain Artist. All provide specific, yet valuable, roles of recursion and removal plus draw.

This version of Niv-Mizzet may not be the first one you think of when the Izzet dragon comes to mind, but take a close look at this deck and you'll find a similar strategy to the popular Niv-Mizzet decks out there with enough difference to make it interesting for the whole table. No longer does Niv get to sit back and just be a jerk while his damage and draw run over you. Now he has to work a bit harder for his victory which hopefully teaches the giant nerd-bully a lesson he won't soon forget.

Let me know of any other great benchwarmer cards for Niv-Mizzet! Which ones did I forget or are just not as good as I think? Or maybe you just want to tell me to leave that giant dragon alone and pick on someone my own size? Do it all in the comments below! See you next time!