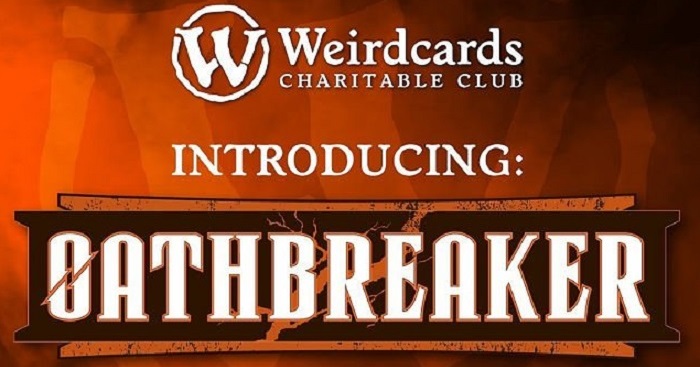 Today is an exciting day, so I am going to preface this entire article with this simple warning: I am extremely hyped! Today, I am excited to talk to you about Oathbreaker and what it means for EDHREC!

“But Seth! What is Oathbreaker?! Where do I learn more about it?! How does this have anything to do with EDHREC?!”

I will do my absolute best to answer all of these questions and more. Let's start with the biggest one: The Professor of Tolarian Community College made a great video about the Oathbreaker format, and in that video, he called the format “the best Commander variant." That's high praise from one of the many Magic: the Gathering content creators out there experimenting with the format. Is it really a Commander variant? Let's look at the rules:

There are some other logical conclusions to make as well, based on these rules. For example, given the lower life totals and the lack of legendary creatures in the command zone, there is no commander damage in Oathbreaker. The lower life totals also allow us to assume that the format is more fast-paced than a typical game of Commander. Additionally, the commander replacement effect doesn't apply to the Signature Spell; you can't choose to put it into your graveyard, it has to return to the command zone. No shenanigans with Flashback or Aftermath.

Oh, and of course, Oathbreaker maintains a different banlist from Commander, which you can find here.

What does Oathbreaker have to do with EDHREC?

The simple reality is that the Oathbreaker format does not have a resource like EDHREC just yet, and if you have been an EDH player for even a little while, you probably know that this site is one of the top tools for building and researching decks for the format. With Oathbreaker becoming more popular over the past year or so, many of the most popular deckbuilding sites have been adapting and adding support for Oathbreaker, including most of the sites that EDHREC gathers decklists and data from. The user base has therefore been wondering if EDHREC would take notice of the growing interest and adapt their data collection tools for this new, exciting format.

I am sure you will not be surprised, having read up to this point, but the answer is yes! Yes we will! To start, I want to be very clear that this initial version of the Oathbreaker EDHREC page is in beta mode, with an initial set of features baked in. As we continue to develop the site, as the format continues to grow, and as the user base creates some requests for how best to search for new ideas, the talented developers of EDHREC can expand on these features and make the site even better! Oathbreaker is becoming so popular that we wanted to push the site into the public to get people brewing, building, and thinking about awesome lists and interactions!

What should we expect from Oathbreaker EDHREC?

I want to clarify some of the initial features of EDHREC's Oathbreaker beta page, mainly so that we can start using it to the best of our ability right away. First and foremost, the site highlights the most popular Oathbreakers, similar to how we highlight the most popular commanders. We've also included the ability to search popular Signature Spells independently, in addition to specific combinations of Oathbreakers and Signature Spells.

We can isolate these categories based on color identities, examine the most popular examples of each category for a given set, and we can search for our favorite cards in the main deck, to see which Oathbreakers and Signature Spells they pair best with. The plethora of Advanced Filters on EDHREC even make an appearance for Oathbreaker, letting us filter everything out until we get exactly what we want to see, along with the classic type distribution on each Oathbreaker's page. It should be noted that some of the features from EDHREC have not made it onto the Oathbreaker page. For example, EDHREC's Themes, Sets, and Recommendation Engine features don't exist on the Oathbreaker page. Rest assured that these features are in the works, but it will take time to polish and finalize them. (I could go deep into nerdy techno-detail about why these are not quick ports from the main page, but the short answer is that the code for these features is written specifically to work with the way EDHREC and EDH decks are listed, and it is not instantly compatible with the Oathbreaker format.) Our developers are going to endeavor to tweak and adjust and bring these features in the future, but again, it may take some time to complete.

So this is it: the first step of EDHREC and Oathbreaker working together. I am excited to see what the format brings to the table, both for kitchen tables and the tables at future MagicFests. I feel it's important to address the concerns some folks have raised about "flash in the pan" formats; some may even say that Oathbreaker will not last longer than Tiny Leaders, Frontier, Brawl and so on. To that, I just want to highlight that the Oathbreaker format has been around for a couple of years already. The recent popularity has been a result of the tweaking and evolution done by the folks who started it, the team over at WeirdCards.org.

WeirdCards.org is a non-profit social club dedicated to bringing people together through a mutual love of playing games. These fine people have also created the magikids.org nonprofit social club, which focuses on teaching kids how to play Magic, training the next generation of cardboard warriors and spellslingers! We're excited and very proud to let you know that all of the advertising revenue generated from the Oathbreaker page for the full months of June, July and August are all going to be donated to the WeirdCards organization! This is a great cause and it is very exciting to see this kind of collaboration between us and the organization that created and evolved this new format.

This wouldn't be a proper article without a decklist! Let's do some brewing.

For anyone who knows me, you should know that my all-time favorite Planeswalker is Koth of the Hammer. He was the first planeswalker card I ever owned and to this day, he is one of my favorite characters in Magic’s history. I figure it's only fair that the first deck I design for Oathbreaker should be based on my boy Koth!

What about his Signature Spell? My first choice was originally Fireball, to be used in conjunction with Koth’s -2 ability, generating a ton of mana and blasting someone’s 20 life out of the game. However, Fireball isn't up to snuff. I think a more efficient spell would be Jaya’s Immolating Inferno, which could blast the whole table at once! Oathbreaker works amazingly well with the legendary instants and sorceries; we can only cast a legendary sorcery if we control a legendary creature or planeswalker, but in Oathbreaker, we can only cast our Signature Spell if we control our planeswalker, so it works out perfectly!

To take advantage of the lower life total, here's a deck that's all ready to burninate the countryside and break some oaths!

We hope you enjoy the new Oathbreaker EDHREC! Have you been playing Oathbreaker? Do you plan on getting into it? Which Planeswalker do you want to brew around, and which Signature Spell would you use? Let us know in the comments down below! Thanks for reading!