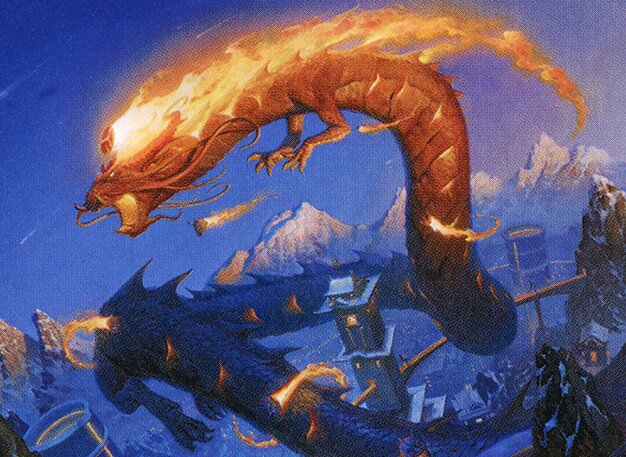 Let's take a look at Atsushi, the Blazing Sky.

Atsushi suffers from being a better card in the 99 than as a commander. While the commander death rule change made it a lot easier to use commanders with these types of abilities, we still have to deal with an ever-increasing commander tax without any of the proper tools to deal with it. This goes double for pure-value-based commanders such as Atsushi, since we want to trigger them as often as possible.

That being said, once we accept our commander's shortcomings, we have a powerhouse of a tool for mono-red. Both modes on Atsushi's death trigger are solid, providing either mana or card draw, two things that mono-red always looks for.

While red won't be the best color to support a detah trigger commander, there are still plenty of good clone effects to copy our commander, forcing the copy to die to the legend rule. Bear in mind that these cards should be used mainly as support or a secondary theme, since it would be awkward to spend resources just to get more resources.

So, how will we give this Dragon a brand new twist?

One of the biggest challenges when using the 'Stuffy Doll effects + gigantic damage spell' interaction is, of course, choosing the right commander. These strategies often get stuck in a situation where they need to deal tons of damage to the whole table to trigger Stuffy Doll cards, which of course kills their own commander, making it impossible to choose a ocmmander that you rely upon for help with that game plan. Atsushi negates this problem altogether! Our commander's death will only bring rewards! Atsushi's trigger is exactly what we need to either rebuild with a quick bump of extra mana to help replay our threats, to use the pseudo-draw to help us find them.

Wrathful Red Dragon is an impressive addition to our deck, as the tribal synergies with our commander could certainly be the difference between whether we can OHKO an opponent or not. Brash Taunter is a more flexible Stuffy Doll and is an all-star in our list for its reliability, and for being so easily tutorable. Blazing Sunsteel is a versatile card that makes any creature into a Stuffy Doll, turns our commander into a decent Voltron threat, and goes infinite with Brash Taunter. Finally, Toralf, God of Fury and Repercussion are excellent at punishing people for having too wide of a board.

The other part of our 'combo' is filled with some common red board wipes. This is a big upside when playing this type of strategy: we're able to fill both the interaction and synergy slots with cards that we'd want to play anyway, which opens up a lot in terms of deck slot economy. Blasphemous Act is the benchmark effect, as it's cheap and does a lot of damage. Sundering Stroke is very consistent in a mono-red deck and does a lot of damage, with or without our creatures on the board. Shatterskull Smashing goes even further on the versatility, working as either a combo piece, a removal spell, or a land.

While our deck wants to 'combo' off, we lack the consistency to make it our primary win condition. Enter the group slug package. Group slug is a perfect theme to complement our strategy because it helps us lower everyone's life total low enough that our Stuffy Doll + Blasphemous Act combination will actually threaten lethal damage. Our deck is very mana-hungry, so having a card like Descent into Avernus that can both ramp us and deal damage is very good, even if the ramp is symmetrical. Manabarbs, Burning Earth, and Spellshock punish players for casting spells in one way or another, and Blood Moon and Magus of the Moon punish players for being too greedy with their mana base.

We've assembled a decent tutor suite for mono-red. Goblin Engineer can grab Blazing Sunsteel if we want to go off even without a proper Stuffy Doll creature, or it can grab Sword of Light and Shadow if we want to rebuild after combing off, or even Cursed Mirror, which can be great in the right circumstances. Goblin Matron can fetch our key creatures, such as Brash Taunter and Mogg Maniac, can grab enablers, like Kiki-Jiki, Mirror Breaker, or it can chain tutors together by getting Goblin Engineer. My favorite one, Imperial Recruiter, is more flexible than the Matron, being able to tutor for any Goblin and even some of our cheaper non-Goblin 'combo' creatures, plus some heavy hitters like Magus of the Moon and Jaxis, the Troublemaker.

Oh, and did I mention? Damage multiplier effects are great here because a lot of our cards deal a lot of damage. Fiery Emancipation goes buck wild, tripling our own damage to our Brash Taunter, which then deal an additional triple damage to an opponent! Bear in mind that these types of cards take extra time to get into play, and attract a lot of attention, so opponents may gang up on us to remove them. To create a big explosion, we have to time the ignition just right.

Our early game strategy should focus more on building a reliable foundation, rather than trying to goldfish our way through the game. As such, we should prioritize hands that offer early board interaction or mana. Our commander is a good failsafe for when we're lacking relevant plays. The mid-game is where we start tutoring to get our key pieces ready. This telegraphs our plan, but flexible deck searches will set us up quickly, and once we land a Stuffy Doll with a big blowout damage spell, our opponents might not be able to survive the initial blast.

If they do survive, that's no problem - our late game is pretty good, and that's where the group slug cards come in handy! Life totals will be low, so even if our damage multipliers didn't secure the win, we can nickel and dime our way to victory... or set up for another explosion! Even games where we don't set up very well can end with a combination of damage multipliers and burn spells.