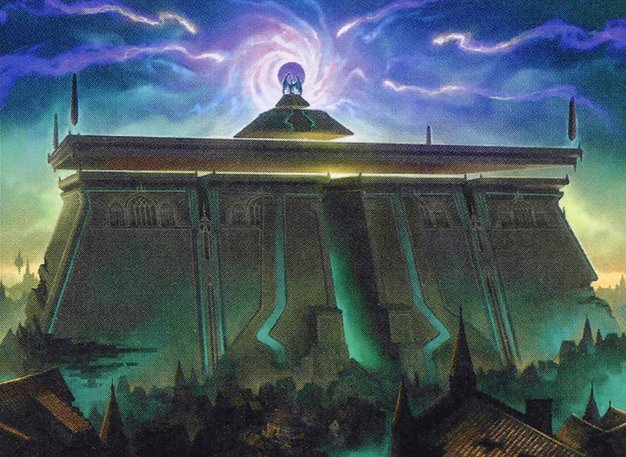 Usually in Epic Experiment, I choose some interesting legendary creature to examine and experiment with. This is not one of those times. We won't be examining any commander in this article! Crazy, I know, but don't leave before you've listened to my proposition!

Instead of analyzing a legendary creature how about we look into one of the most intriguing cards released in War of the Spark? I'm talking about Bolas's Citadel.

You may look at the top card of your library any time.

You may play the top card of your library. If you cast a spell this way, pay life equal to its converted mana cost rather than paying its mana cost.

Yep, this is a very powerful take on Future Sight, and we even get to keep the element of surprise, since we don't have to reveal the top card of our library to everyone.

Counterspells are awkward when building a deck around this card. We can counter spells, but this also means that we'll be stuck with a counterspell on top of our library.

We have to be careful of the life loss when constructing a deck around this card. It's not so bad that we're forced to build lifegain, but Draco, Blightsteel Colossus, and Kozilek, Butcher of Truth might have to sit this one out.

This card benefits greatly from top-deck manipulation, even becoming a Yawgmoth's Bargain when combined with Sensei's Divining Top. Getting stuck with a land clump on top is no bueno, so extra manipulation will help smooth things out.

Its activated ability, while severely overshadowed by the rest of the card, is still quite strong. It might be hard to use it as a win con, but still can help finish off opponents. People are trying this card out across a wide array of strategies. Lifegain, top-deck manipulation, artifacts, spellslinger, aggro, a bunch of strategies are represented on this page. It's still too early to know which decks will benefit the most.

Now that we know what we're dealing with, what sort of degeneracy are we going to create with our brand new toy? Are you ready?

Just let this sink in for a while. We are basing our deck on Bolas's Citadel, a card that lets us look at the top card of our library and play it. Therefore, what do we not want to happen? We don't want to whiff multiple times by running into a strip of lands on top of our deck. What is Persistent Petitioners's first activated ability? Milling the top card of a library. Goodbye lands, hello to more spells!

Let's think of it the other way around, too: we are basing our deck on Persistent Petitioners, a creature that wants to have a bunch of copies of itself in play so that we may mill our opponents. How many Petitioners do we want on the field? As many as possible. What does Bolas's Citadel do for us? Let us play cards for free. The synergy here is perfect!

So, once we successfully play Bolas's Citadel and throw a bunch of Persistent Petitioners onto the field, where do we go from here?

Another powerhouse from its set, Paradox Engine gives us the inevitability of 'going off' on the turn we play Bolas's Citadel. How does that work? Simple: we start chaining spells from the Citadel until we find a tutor or the Engine itself. With the Engine in play, we can tap our Petitioners to mill an opponent, cast a spell for free from the Citadel, and untap our Petitioners. (Remember, too, that the Petitioners' second ability doesn't care about summoning sickness!) With all these untaps, our enemies will be left with no libraries in short order.

Aetherflux Reservoir is another way to go off with the Citadel. The lifegain helps mitigate the life loss from the Citadel, but with enough spells, it can also become a dangerous win condition. It's a little less likely to go off than Paradox Engine, but it's a better finish.

What if we can't land our Bolas's Citadel? Do we just lose? Nope! Since our Persistent Petitioners work both as enablers and as finishers, we can just play them like any typical Petitioners list. Thrumming Stone is a very strong card for these decks. Duskmantle Guildmage and perhaps even Bloodchief Ascension can help us change from mill to life loss, too, if need be.

We still haven't picked a commander! Let's vet the candidates for Mayor of the Citadel. Each of them brings something unique to the table.

Sharuum, the Hegemon offers recursion with her ETB ability, gives us access to white artifact tutors, and even allows us to use Entomb to tutor for the Citadel and bring it right into play. She does have a lot of the synergies we'd look for, including the potential for other infinite combos that benefit from self-milling, but she's expensive to cast, and a very 'red flag' commander that others will probably target when they see her.

The Sultai Partner combination of Silas Renn, Seeker Adept and Thrasios, Triton Hero offers a very diverse contribution.Silas can recur the Citadel, and Thrasios's green gives us access to effects like Bloodbond March, and assists with some top-deck manipulation. Silas is a smidge unreliable, but the combination here is interesting.

There are a lot of options to choose and that choice is pretty much personal taste. When considering a commander for this strategy, we need to think about what they bring to the table. Do they help us recover from losing our permanents, like Muldrotha, the Gravetide? Do they help us win, like Breya, Etherium Shaper? Do they provide assistance outside of the combo? What colors do they give us?

So, which commander did I end up choosing? Take a look:

As you can see I chose Rona, Disciple of Gix to be the commander. Rona is, frankly, a lot of wasted potential. Her ability to recur artifacts is potentially dangerous, since she doesn't remember her exiled cards if she leaves the battlefield before you cast them, and though she can help with top-deck manipulation, summoning sickness does slow it down.

Why Rona, then? First, because she's basic Dimir, which helps simplify the manabase. Second, because I like Rona (#science). Third, since this is more of a 'proof of concept' type of list, I think that having the ability to recover my artifacts for cheap is a good starting point. If we need to expand into other colors with a different commander, we can, but for now, the two-color version helps us stay focused and make sure the deck works the way it should.

Now, let's talk about the list. The way that I see it, this list is like a Primal Surge deck. We're trying to cast as many cards as possible from Citadel, so strictly reactive cards and high-mana-cost cards are a big no-no. The number of Persistent Petitioners isn't set in stone, so feel free to adjust it to your taste to find a good ratio.

Even though Paradox Engine is pretty important in this list, there are other ways that we can untap our permanents, either to generate mana or to manipulate the top of our deck. Turnabout and Dramatic Reversal are great one-shot effects. Intruder Alarm can also help us turbo out a win with Citadel in play. Future Sight does a poor man's impersonation of Bolas's Citadel, but since it's so cheap to cast Persistent Petitioners, it can really help us snatch a win.

For tutors, we have the usual suspects: Fabricate, Whir of Invention, Demonic Tutor, and Diabolic Intent. In a similar vein, but slightly more useful, Vampiric Tutor and Mystical Tutor are cheap and flexible options that works really well when paired with Bolas's Citadel.

The rest of the deck basically consists in gathering as many mana rocks and cantrips as possible to cast Bolas's Citadel ASAP and fuel Paradox Engine. It's a nasty combination, and sure to spell doom for our enemies.

In our opening hand, we need a couple of lands and some way to dig into action, either from tutors, cantrips, or even Lantern Of Insight/Sensei's Divining Top. We should focus on playing mana rocks before deploying the Petitioners, since we'll need to make sure we can cast multiple spells per turn when we need to. Cantrips and top-deck manipulators, on the other hand, are usually better to cast after playing some Petitioners, so we can follow them up with more spells.

By the mid game, we're looking to cast Bolas's Citadel. This must be navigated with extreme care, because one error could completely hamper our strategy, and lead to a long recovery period. I recommend playing conservatively with tutors, only using them the turn before you play Citadel and begin chaining spells, if not on that very same turn, so you don't project your insidious plans to your opponents and give them extra time to prepare to answer your combo piece.

If we aren't able to stick the synergies early, the late game isn't very kind to us. By that point we'll probably have taken some damage, which makes chaining spells with Citadel much harder. It's likely that we'll have lost some pieces along the way. There's still hope, though! It's true that we may have a harder time going off, but, at the same time, our opponents will also have more difficulty in removing our pieces. This is where Rona, Disciple of Gix will shine, as she can grab us some good spells, either from the grave or the top of the deck. We still need to play her very carefully, making full use of priority to immediately cast whatever we exile, so there isn't any possibility of it backfiring if someone removes her and leaves the card stranded in exile.

This is definitely one of the weirdest decks I've tried in this series. I can't say the above list is optimized, and there are plenty of potential changes to make.

For example, to make sure you don't help out any graveyard players when you start milling them, consider some other new cards from War of the Spark, like Ashiok, Dream Render! Another crucial aspect of the deck is the number of Persistent Petitioners. I choose to put 33 in my list, a solid third of the deck, but some might prefer fewer Petitioners, and some might prefer more! (Whichever number you choose, be careful to not go lower than 25 so you stay within Thrumming Stone territory.)

Then, of course, there's also the commander choice, and the option to expand into other colors. Oloro, ageless Ascetic might help sponge out some early aggro, while Breya, Etherium Shaper gives us a wincon and two extra colors. If we go into green, other options like Bloodbond March become available, too. The possibilities are so endless, so please let me know in the comments which commander you would choose for this strategy, and why!

That’s it for this Epic Experiment! What do you think about the newest set, and building a deck around one of its marquee cards? Please fell free to leave any suggestions in the comments section. Do you have any questions about the list? Which cards did you like? Which didn’t you? Was the Epic Experiment a success? Please let me know!