Epic Experiment - Past in Flames Edition 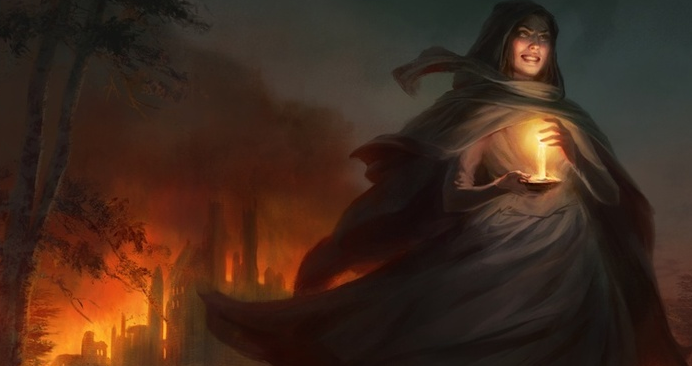 (Past in Flames | Art by Anna Steinbauer)

This article is somewhat special: it's the 30th entry of the series!

We'll be doing an update on some of our previous builds, discuss some things I've learned since I started, and what would change had I built those decks today. Some of these are just small changes or tweaks, while others are much more drastic changes that change the shape of those previous brews. With that said, let's get started!

Sliver Zur was a fun thought experiment that I had a bit after Ixalan was released. The idea was to use Zur, the Enchanter as a way to get some serious card advantage by tutoring for relevant enchantments. The funny thing is that we also get to tutor for Arcane Adaptation, which makes Zur stronger since he gets the bonus from our creatures' abilities.

At that time I wasn't too experienced with creature-based aggressive decks, and this shows in the build, which I wish was more disruptive. Zur, the Enchanter has an incredible range of targets and, as a tribal deck, we need to be faster and more efficient than our opponents. Another important lesson was to have a better defensive suite. Giving hexproof to one permanent can be nice, but there are a lot of better cards that we can grab.

We're removing some of the top-end support (Akroma's Memorial and the Immortal Sun) to add lower-costed, more explosive support. Always Watching, Mine Excavation, and Curator's Ward felt a bit underpowered when looking at other options available to us.

Spirit of the Labyrinth and Eidolon of Rhetoric are fetchable by our commander, and they can become Slivers after we grab Arcane Adaptation.

Finally, Kindred Dominance was just too expensive for a defensive card, so it got replaced by Wrath of God. Sure, it'll hit our creatures too, but being cheaper means that we get to cast it earlier, which might negate some of the drawback.

Graveyard hate is important in a mill deck

This deck was a pretty exciting take on mill. It started fairly simple, just copying the standard mill spells with our commander. However, I quickly discovered how blazingly fast we can mill our opponents with Wheel of Fortune effects.

This may come as a shock, but a lot of decks tend to use their graveyard as a part of their strategy. Who knew? Milling without eliminating players is pretty risky without any sort of way to stop or prevent possible graveyard shenanigans. This deck can be quite explosive, but unfortunately it's often not quite explosive enough, which can give the graveyard player(s) a huge leg up. Graveyard hate also scales well with Timetwister effects because the cards that we exile from our opponents' graveyards don't go back into their decks.

Some of the Fork effects got cut, which makes the deck a bit less explosive, but on the other hand, we get more consistent and less reliant on mana. Laboratory Maniac also felt very vulnerable without having a consistent way to get it out and protect it, so he's out.

I've always felt that Thousand-Year Storm was a bit too durdly in this shell, so I'm switching it out for God-Eternal Kefnet. He has lots of potential in this build since we have some control over the top of our deck, and even though he doesn't really get along with our commander, we can still use the redundancy.

Lastly, Echo of Eons was a neat addition to our list, although it might be better to invest a bit more on looting for us to maximize its potential.

This is a very fun take on the Warrior tribe. The idea came to me when I considered the combination of Karona, False God and Najeela, the Blade-Blossom in a Warrior tribal shell. Karona provides a somewhat different feel for the tribe, improving its go-wide capability while also giving us a possible 8/8 haste attacker when things get too tough.

One missed opportunity, however, was that I did not fully consider all my options for supporting this aggressive shell. For example, Bring to Light is one of the most versatile tutors out there, and it has some great targets for us.

Bring to Light is a great card because it has the versatility to fit into almost any situation. Need to get through lots of blockers? Overwhelming Stampede. Is the coast clear? Waves of Aggression. Did we lose our whole board? Patriarch's Bidding.

The change might be small, but this means that we have a card that is always what we need for that specific situation.

The Living End + Anje Falkenrath was one of my favorite decks because of how crazy it looks on paper. Anje can be a extremely streamlined commander, because of that, some might say that she's too linear or goldfish-y. This provides a challenge, since we need to at least somewhat live in the same realm as traditional Anje builds. This led me to a build that is extremely linear and plays very little "actual" cards, relying instead upon sheer draw power to find its win conditions.

One thing that I saw after posting the article was how expensive, in dollars, the Living End package is. This didn't feel quite right; usually I don't really care about budget, but this deck has all the makings of a good budget list, which was wasted with said package.

These changes are made to make the deck a smidge friendlier to the wallet. The biggest drawback is the loss in consistency. However, we do pick up some nice gems, such as Ayara, First of Locthwain, an interesting method of weakening our enemies before the alpha strike, and Faith of the Devoted, which can help grind out more complicated board states.

This deck was also one of my favorites. The idea of combining Bolas's Citadel with Persistent Petitioners got me very excited. The great part of the build is that it didn't really dictate how we should be building it, and every color seemed to add its own unique flavor to the list.

The biggest problem was that it got hit by the Great Mjolnir of the Rules Committee when Paradox Engine was banned. In this instance, this makes the Dimir color combination a lot worse for this particular strategy, since we won't be untapping our mana rocks nearly as often without it. To compensate, we're changing not just a few cards, but the entire commander! Time to add green so we get the "Paradox Engine experience" with extra creature untappers, such as Seedborn Muse, which also go beautifully with the mana dorks we can now add to the deck.

I chose Sidisi, Brood Tyrant as our commander, since the Peititoners always give us access to mill the top card of our own deck, and considering we have almost 50 creatures in the list, Sidisi will always be able to find a creature to turn into a Zombie. Since we're relying so much more on having creatures in play, this new build is more vulnerable to board wipes, but the speed and the consistency should more than make up for the added vulnerability.

Our kill conditions are pretty much the same, lazering people to death with Aetherflux Reservoir, milling our opponents with our Persistent Petitioners (which can be powered by the Dramatic Scepter combo for the one-shot kill) or beating people down by making a small army of Zombies with our commander.

That’s it for this Epic Experiment! I want to thank all of you for reading and commenting on this thirtieth article. Here's to thirty more! What do you think about the series as a whole? What was your favorite experiment? Do you have any suggestions or criticisms? Was the Epic Experiment a success? Please let me know in the comments below!