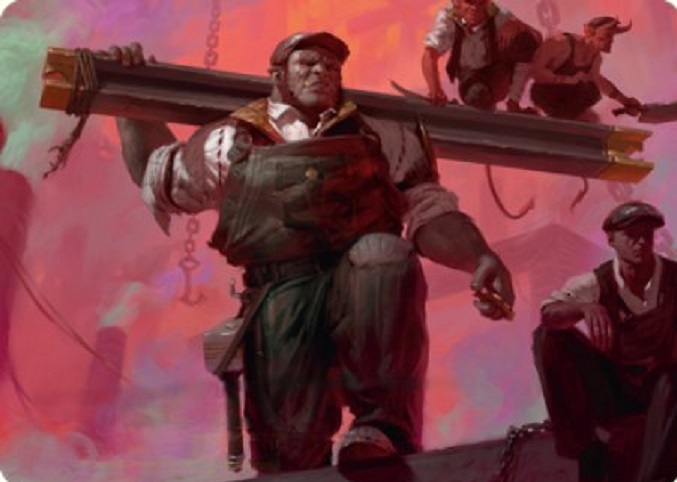 Let's take a look at The Beamtown Bullies.

The Beamtown Bullies take a new spin on both the usual creature recursion-based commander and politics commander, so there's a lot of room to play around with their ability. For instance, we can play the aggressive gameplan and use them to accelerate the game by getting baddies to come out and play, or we can use effects that tax and slow down the game (or do the polar opposite), and there are even some super nasty creatures that we could build the entire deck around, working hard to get them onto the field under an opponent's control, such that the deck would almost function like a combo deck to ruin our opponents! Regardless of how we're trying to build The Beamtown Bullies, the ability to play politics is crucial to our success.

While they might not be as splashy as those big Leveler-type effects, we shouldn't sleep on good single-target removal-based creatures. Having instant-speed access to our graveyard can be the key to disrupting our opponents before they get a chance to go off, which is especially useful when coordinating with the rest of the table.

Aside from the obvious powerful ability, a crucial aspect of this card that shouldn't be underestimated is its combative potential. A four-mana 4/4 hastey commander that can attack each turn without risking the loss of its ability can be pretty useful in longer games because that commander damage might help us win in any potential 1v1 scenarios.

A very interesting aspect of The Beamtown Bullies is how one-note their usual strategy tends to be. Give an opponent a Leveler from the graveyard and they're immediately out of the game. It's powerful, but very one-track-minded, which left me searching for the ability to have a secondary wincon package that doesn't need that much setup or take up important deck slots. I wanted to choose another archetype to invest in, and with all those new Gates that were just released, the idea of a tricolor Maze's End isn't as janky as it used to be. In fact, with 11 possible cards in a three-color deck, I'd say it's pretty streamlined!

Maze's End as a win condition is pretty slow and can struggle when facing aggressive decks because we lack ways to eliminate them from the game. That's where the The Beamtown Bullies package enters the picture. Ebonblade Reaper and Master of Cruelties greatly reduce some unlucky opponent's life total, while Inverter of Truth and Leveler are more straightforward and have the potential to outright eliminate the target. Combining these two strategies seems bizarre at first, but each of them allows us a win condition on a completely separate axis, covering multiple bases!

Ramp is a crucial part of every Maze's End list. We need to gather at least 11 lands to be able to combo out, and most of them enter the battlefield tapped. Luckily, we now have a lot of options that not only help us get those Gates into our hand but ramp them into play! Cards like Gatecreeper Vine, District Guide, and Open the Gates smooth out our early game by guaranteeing a land drop for a future turn.

Circuitous Route and Explore the Underdark are efficient mid-game sources of ramp that help us accelerate our win condition, and Elvish Reclaimer, Ulvenwald Hydra, Crop Rotation, and Hour of Promise are better mid-/late-game options to find Maze's End or other Gates, and we can even use them to get other utility lands, like Bojuka Bog and Strip Mine, if necessary! Then, Reshape the Earth and Scapeshift are our late game "I Win" cards!

Since our commander provides such a convenient source of recursion, why not use it to our advantage and include a package of powerful control-based ETB creatures? This is where the political aspect of the deck truly shines: we can coordinate with our opponents to control the board. Did someone just play a scary enchantment? We've got Reclamation Sage, Foundation Breaker, and even Bane of Progress! Did someone play a big bad creature that everyone wants to kill? We have single-target removal, like Ravenous Chupacabra, Big Game Hunter, Shriekmaw, and Flametongue Kavu, as well as the more generic sacrifice effects, like Plaguecrafter and Demon's Disciple!

For the traditional Beamtown wincon package to be effective, we need to be able to put those creatures into the graveyard without needing to cast them. The first way to accomplish this is through discard, either with looting/rummaging effects, like Faithless Looting and Cathartic Reunion, or through value creatures, like Rotting Rats and Miasmic Mummy. Another efficient way to fill our graveyard with goodies is with self-mill; cards like Satyr Wayfinder and Grapple with the Past pull double duty by also allowing us to dig for our Gates.

The final way involves tutors: searching our deck for a specific card and putting it into our graveyard. See cards like Unmarked Grave, Entomb, and Oriq Loremage.

Land recursion is the final piece of our deck. They play well in this shell because they provide protection against removal and allow us to access cards we'd have discarded or milled with our enablers. Ramunap Excavator, Crucible of Worlds, and Life from the Loam are great in slower games, where we can keep replaying our fetches and get more consistent mana sources over time. One-shot effects, like Riveteers Confluence and Restore, are more cost-effective but have no further value afterward. Splendid Reclamation, for our purposes, ought to be played less like a value card and more like an "I Win" button because of its potential to create insane board states with cards like Field of the Dead, Omnath, Locus of Rage, and Rampaging Baloths.

Our deck is pretty forgiving when it comes to opening hands. We have a lot of cheap interactions and ramp, so any hand that has a couple of early plays is probably good enough for a keep. In the early game, we should take it slow, playing our ramp and buying ourselves time with pinpoint removal when needed. We don't need to rush for our commander; we can wait until we have a good target (either removal or one of our combo finishers) before we commit to casting the Bullies.

Our mid-game is what we have to watch out for. An early Bullies 'combo' can delete a problem player but will set the other players' sights onto us. We have to survive the transition from the early game to the late game, and this can be tough when a lot of the cards in the deck are things like ramp, which don't affect the board state. Don't get me wrong, we have powerful cards, but they take time to accrue lethal board states, like Omnath, Locus of Rage for example. The good thing is that this stage usually doesn't last long.

Our late game, however, can be powerful, because combining resiliency with all this recursion makes for an inevitability machine. Cards like Reshape the Earth and Scapeshift make the Maze victory only a matter of time, while Master of Cruelties and Ebonblade Reaper shine in post-board-wipe scenarios, where we can simply cast our commander and use its ability to get back one of these creatures to delete a player from the game.

There are a lot of nasty targets to get back with this commander, some of which I personally wouldn't feel comfortable playing but that certainly warrant a mention for any players looking to tune this deck up even further. Eater of Days, for instance, is very powerful, and can be great when there's only one opponent on the field. I just find it unfun when there are still other people at the table. Mindslicer is another one that can slow the game to a halt. There are plenty of choices to make with this deck, and I hope the Maze's End helped make it silly enough that opponents will have a good time trying to navigate the Bullies' multi-faceted routes to victory!