Evasive Maneuvers — The Power of 2 (or Less!) 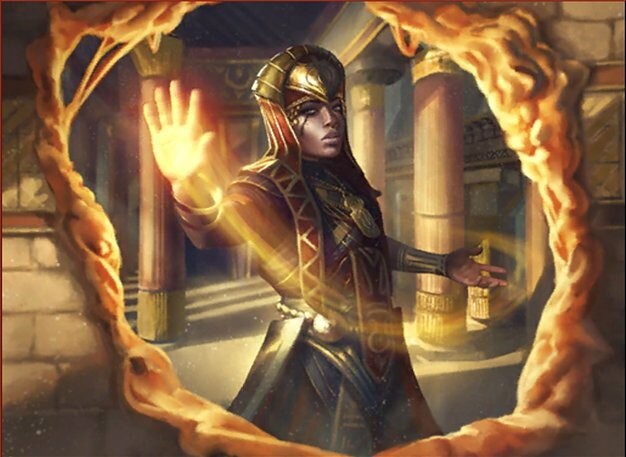 We're ditching the rulebook on this one and breaking a bit outside of tradition, where we'll be looking at conditional evasion, particularly as it relates to the power value of 2 (e.g. a 2/2).

Now I know what you're thinking: "Dude, that's not even a keyword." Fair 'nuff — you caught me. But as I hope to convince you down below, Wizards of the Coast (WotC) seems to be leaning on this form of evasion more and more despite not having a keyword for it. To ignore it would be to put our heads in the proverbial sand, and no one wants to see ole' Dune-Brood Nephilim when they pop out.

So without further ado, let's dive into the power of two!

While a 2-power creature (e.g. Grizzly Bears) can threaten 10% (2/20*100) of an opponent's life total in one-versus-one player formats (e.g. Modern, Standard), the same Grizzly Bears only threatens 5% (2/40*100) of one opponent's life total, or 1.67% (2/120*100) of all three opponent's life totals in Commander. But that's not to say that chip damage isn't important. For one, get your chip-ins! Forty life points is a hefty cushion to leverage with advantages like Ancient Tomb, Sylvan Library, Necrologia, or Bolas's Citadel, so never discredit the impact your Ursus arctos horribilis can have!

Second, the scalability of 2-power creatures in Commander may seem underwhelming, but we can't be so easily duped. Many a seasoned Commander player has seen the power with which Alesha, who Smiles at Death, Ezuri, Claw of Progress, or Grenzo, Dungeon Warden can muster forces, assemble combos, and force interaction all with creatures power 2 or less.

As it turns out, conditional evasion for creatures with power 2 or less has been around since nearly Magic's inception. Tawnos's Wand (1994) and Runed Arch (1995) were some of the early cards to enable this, followed by a number of red cards including Dwarven Nomad (1996), Dwarven Warriors (1997), and Hearth Charm (1997).

There's a good ~60 cards or so that care about creatures with power 2 or less, but only about half of those really deal with power 2 in an evasive manner. Interestingly, about 16 of those grant evasion to smaller creatures like the cards listed above.

What about the rest, you may ask? Well, let's just say they are technically evasive, but not entirely great...

A golfer sweating in their slacks for going double bogey on the last hole hears their caddy nervously whisper: "Uh, we really need a two here on this hole." Aiming for less, it turns out, isn't always easy.

Whereas the cards above are predominately red, these are predominately green (82%), such as your Questing Beast, Ravenous Slime, or Greater Sandwurms, followed by colorless (17%), such as your Scuttling Doom Engine, Gate Colossus, or Demolition Stomper. These creatures huddle around ~4 power (mean = 4.35, median = 4, mode = 4) and essentially negate the effectiveness of chump blocking, where small indispensable 1/1s or even 2/2s will throw themselves in harm's way as blockers to prevent incoming damage.

Building around this strategy isn't entirely easy, though, as it can be tricky to modulate what your opponents' blockers are. Looking at the top 100 creatures and commanders on EDHREC, we see they tend cluster to the following power values:

While your Scuttling Doom Engine may get by most of the popular creatures, it might run into trouble against most commanders. Further, commanders are a bit harder to really pin down, since your Abomination of Llanowar or Akiri, Line Slinger isn't likely staying small in power for long. With commander damage being something unique to our format, I think plenty of commanders out there may have a misleading base power and toughness, so don't get your hopes too high about your Greater Sandwurm getting through.

Sure, if you can get your Vedalken Humiliator to trigger, or perhaps cast Polymorphist's Jest or resolve the pip-intensive Godhead of Awe then your Outland Boar-variant will become unblockable. But at the end of the day, that's a lot of set-up just to get in with your Outland Boar.

Until there's possibly more support for this, I think there are just better options (e.g. Trample).

Let's double back to our earlier look at building around creatures with power 2 or less in an evasive manner. Since we're all about the number 2 this installment, I think we'd be doing a disservice if we didn't run Partner commanders. For this list, we'll look to none other than Sidar Kondo of Jamuraa Partnered with Tana, the Bloodsower

Like many Partner combinations, you want to focus on one Partner more than the other. We'll be leaning heavily into Sidar Kondo of Jamuraa here and using Tana, the Bloodsower primarily as a value piece. Yes, Tana, the Bloodsower is typically a commander whose power you want to beef up, as more power translates into more Saprolings, but, for our purposes, we're just fine leaving her as she is, as we are more interested in going wide than tall, and she'll be evasive with our Sidar Kondo of Jamuraa, and synergize with many of our other power 2 or less payoffs. Even just a steady stream of two Saprolings every combat will do us just fine.

What we really care about is that Sidar Kondo of Jamuraa pseudo-Skulk ability. As we've seen with having Sun Quan, Lord of Wu or Stonebrow Krosan Hero, having evasion in the command zone to bring out at a moment's notice can be particularly potent, which raises the question: just who is he granting evasion to? Who are 'the bears', so to speak?

We're sporting a large creature package (33) with nearly every single one having power 2 or less. Since we have comparatively weaker creatures, we can lean into some parity-breaking effects like Meekstone, as well as include a hatebears subtheme (e.g. Gaddock Teeg) to slow down our opponents.

Which brings us to one card I've been trying to get to work for a long time, and I think this is the perfect deck for it: Wild Pair

Wild Pair benefits you by letting you tutor out creatures if they match the total power and toughness values of the creature you just cast. Similar to Birthing Pod-style builds, this card shines brightest when your deck is constructed in a deliberate and specific way to leverage the toolbox potential of chaining creatures together. Seeing play in 2,964 decks (1% inclusion rate), we see it crop up predominately in tribal builds, like Sliver Queen (437 decks, 27.08%), Atarka, World Render (46 decks, 15.70%), and Ayula, Queen Among Bears (128 decks, 10.52%).

While we aren't doing a tribal build, our emphasis on power 2 or less means that most of our creatures can search out one another. Here's a list of potential pairings for Wild Pair in our build. In essence, casting any creature within that category can go fetch out another from the same category:

Overall, I like how Wild Pair lends a toolboxy sub-theme to an otherwise aggressive deck. We can cast a Hanweir Garrison and grab our Beast Whisperer if we need draw, or maybe Kinjalli's Sunwing if we need to slow down our opponents. Or maybe create even more complex chains like casting Recruiter of the Guard, which can tutor for a number of juicy targets, and then can fetch out Imperial Recruiter with the Wild Pair trigger. Imperial Recruiter won't trigger Wild Pair again, since it wasn't cast from our hand, but it will search up another creature due to its ability being an enter-the-battlefield trigger. For 3 mana, we get two bodies on the battlefield and another two in our hand!

Adieu to the Deux

That wraps up our look at the power of 2 (or less!) in Commander, particularly as it relates to evasion. At first glance, creatures with power that can remove only 1.67% of your cumulative opponents' life total may seem lackluster, but they can have some neat triggers, effects, and synergies that make them punch above their weight class.

What do y'all think? Are you intrigued by this non-keyworded form of evasion? Do you like that it's predominately found in red? Do you play a deck with a power restriction (e.g. Alesha, who Smiles at Death) and find it enjoyable? Sound off in the comments below!