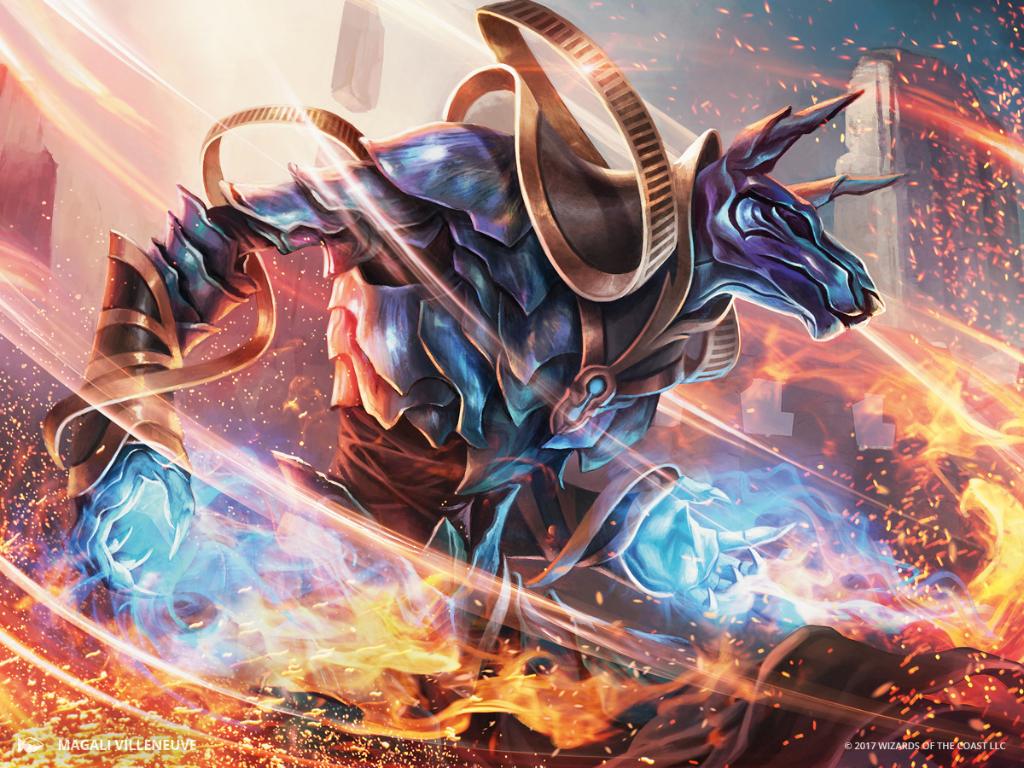 You read this byline correctly, it is I, Jason Alt, long-time behind-the-scenes manager of content on this site, contributing a piece to EDHREC. And why not? Our other authors writing an EDH review of the cards in Hour of Devastation looked like so much fun that I had to try it for myself. I chose Red because Red was the color that was left over when everyone else called dibs on the good colors. Red is often referred to as the 8th best color in EDH (White, Blue, Black, Green, Gold, Artifacts and True Colorless) and it's hard to disagree with that assessment. However, while mono-red can be underpowered at times (Unsummon at a mana scales much better than, say, Lightning Bolt) it can also bring a lot to the table, especially in concert with other colors. Today I'm going to take a look at the Red cards in Hour of Devastation and try to figure out which ones we'll likely end up playing in EDH once people get their mitts on cards and start building decks. Depending on in which order we publish these reviews, it's possible you already knew that.

I fully realize that we're likely to get about 2 truly EDH-playable cards from this color, but I'm going to mention every card worth considering anyway because you didn't click on this article to read "Neheb seems good. OK, see ya!" If you think there's a card I discuss that no one is going to play, you're probably right. If there is a card I omit you think is worth talking about, mention that in the comments and let's get a discussion going. This is a set full of EDH goodies and while it looks like the other colors are having all of the fun, Red has a few tricks up its sleeves. Let's get to it! Abrade isn't the sexiest card in Hour of Devastation but 220 people are running Shatter in their decks. I'm sure Dana is going to come along at some point and tell us why we're wrong for doing that and if he does, he's going to mention a card like Abrade that's just better than Shatter (I tend to avoid using the phrase "strictly better" because if there's one thing Magic nerds like, it's coming up with some corner case scenario where Abrade isn't strictly better, as if defeating me in a battle of wits that way means they get to take over my column). Dealing 3 damage to a troublesome creature can get you out of jams in EDH and while I don't advocate running something like Lightning Bolt to do that, I think a modal card like Abrade has a place in decks. This is better than Shatter, a card people play. I don't hate this. I get that we probably wanted a better creature for 7 mana. This has to try and compete for a spot in your deck with cards like Inferno Titan and Crater Hellion and for some reason, Wizards insists on not having their cards ruin Limited the way this probably would if it were any better. I mention this card because it's like Crater Hellion without Echo and you can blink this to rack up some damage. Crater Hellion is in 414 decks and although 4 damage is a lot more than 3, this deserves a look. Guttersnipe is in over 3,000 decks on EDHREC, and while this isn't quite Guttersnipe, it's not not Guttersnipe, either. Besides, Impact Tremors isn't Pandemonium and it still gets played in almost 4,000 decks on EDHREC. A little redundancy in your damage dealing is never a bad thing in a deck that uses this effect and I bet this ends up being a sleeper inclusion in decks running Guttersnipe. I like this card existing, regardless of whether EDH "storm" players can find a spot for this in this list or not. I feel compelled to write about this card even though I'm not sure I like it at all. This is certainly cheating but if I am to be cheating, I sort of want to be... cheatier? Is that wrong? Collected Company is in a scant 369 decks on the 'REC for a reason - if we're going to cheat in EDH, we want to be putting in an Eldrazi, not a Signet. Red is known for chaos effect and while the outcome of this spell is certainly unpredictable, what seems fairly clear is that you're almost guaranteed to be underwhelmed. There are very good spells in EDH that cost 5 or less to be sure, but how many of them do you want to hit on a random turn, a turn before you don't untap any of your lands, no less? All of that said, some lunatic is going to jam this in a deck and blow my doors off because it's better to be lucky than good, I guess. I bet this sees play, even though it shouldn't. Call this Possibility Storm 2.0. Finally, a way to avoid getting totally blown out by Crested Sunmare! This card seems scaled a little low for EDH where 5 damage isn't quite enough to kill the most troublesome creatures, but this does kill about half of the cards I worry about, especially really tough-to-kill creatures like Purphoros, God of the Forge, Iroas, God of Victory, Xenagos, God of Revels, Athreos, God of Passage, Pharika, God of Affliction, etc. Roughly half of the Theros-block Gods fall to this mighty sorcery and that's nothing to sneeze at. Add to that all of the other indestructible, nasty creatures out there and the fact that this wipes the board of tokens and you have a spell worth consideration. I think this has a place in EDH, even if Nicol Bolas' pose on the card reminds me on Buffalo Bill dancing in the mirror to Goodbye Horses. Goodbye Horses? Removing indestructibility and dealing exactly 5 damage? This truly was designed to kill Crested Sunmare. So this is the fate of the worthy? You lose all semblance of your tribal affinity and go it alone? That's slightly sad. What's not sad is how good this card is. If you like durdly minotaur tribal decks, Neheb, the Worthy is your huckleberry, but if you want to make all of the manas and do some damage to some faces, this is where it's at. Dean covered this card's potential pretty thoroughly so I won't belabor any of the points he made, but I will say that this fits in the 99 as well as at the helm of his own deck and this promises to be one of the more impactful cards in the set. This is a punisher I can get behind. I think this falls off hard in the late game where they can take the 4 and just kill your dude with a blocker and 4 damage is much less punishing in a 40 life format than a 20 life one, but if you can find an opponent willing to let you through with this, or if someone falls behind and can't muster a blocker or, hell, if you use Rogue's Passage to ensure they don't have a choice, you can cast some pretty big and nasty spells with this. You see why I like this and not Hazoret's Undying Fury? If we're going to cheat, let's cheat. Let's cast a free spell that costs more than 5 mana, shall we? Pair this with Quietus Spike to make the hit even more punishing or pair with Whispersilk Cloak to make them miserable.

That's what I came up with. There aren't a ton of cards in Red and a lot of them seem tuned for Limited, but the few we covered here could really get there in EDH. Again, if I overlooked something you like, hit me up in the comments section and we'll chat about it. Thanks for reading, and be sure to check out the reviews in other colors by our other contributors.