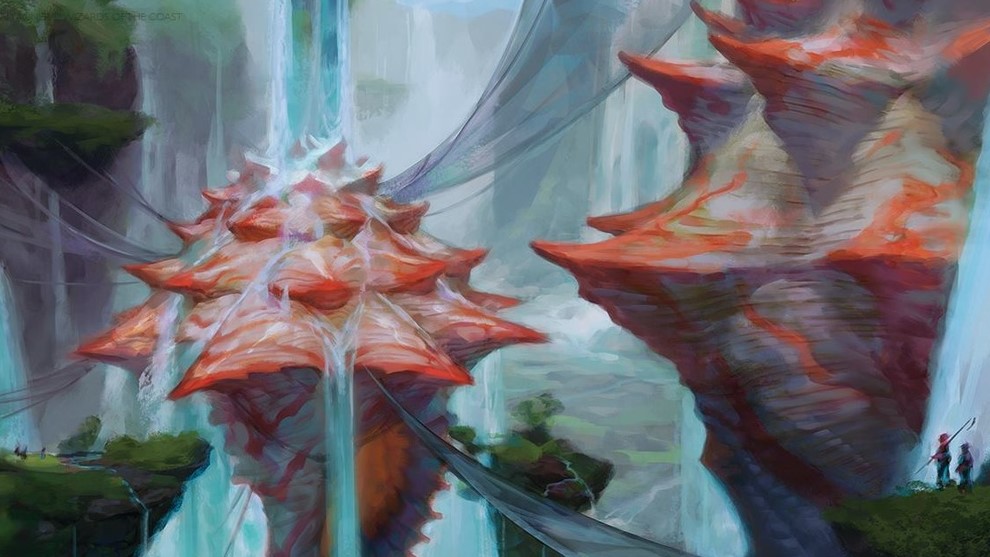 “Where are we? You must learn to ask more useful questions than that.”

Magic players love lands. They enjoy hitting their land drops and they love getting to play multiple in a turn. When the Landfall mechanic first appeared in the original Zendikar set, the designers at Wizards of the Coast stuck gold by rewarding players for doing something they already loved. Zendikar sure was a hit, and I’m guessing the enemy fetchlands had something to do with that (looking at you, Misty Rainforest).

Undoubtedly, people were excited when a return to Zendikar was announced. Battle for Zendikar had sweet Expeditions (still looking at you, Misty), which paved the way for what’s now known as the Masterpiece series. Beyond that lottery ticket hype, we saw a return of the fan-favorite Landfall mechanic, and while some say that Battle for Zendikar was huge whiff in terms of flavor and power, Commander players did get a big bad Landfall commander in the form of Omnath, Locus of Rage.

Despite All Its Rage

Following in the vein of cards that reward you for doing what you planned on doing anyway - playing lands - this version of Omnath is the go-to Landfall commander. Every land you play also produces a 5/5 Elemental threat, and the Locus of Rage itself makes it hard for anyone to mess with your cadre of tokens, giving you a Lightning Bolt anytime one of those red-green forces of nature hit the graveyard. What’s not to love? Every Rampant Growth comes with a free 5/5 attached. Oh, and that Misty Rainforest, how about two tokens for one land?

But hey, this is Mind Bend, the article series meant to break down conventional notions of deckbuilding and to forge new ground outside the confines of the already established. This time, I’m going to replace Omnath, Locus of Rage with a commander from a pre-constructed deck AND not use red or green to do it. That’s just how this series rolls.

So what makes Omnath, Locus of Rage’s giant red-green heart tick? As usual, EDHREC has got our backs. Omnath, Locus of Rage’s Signature Cards are kind of a mixed bag, with almost each card showcasing a different strategy that a Landfall deck can utilize. Here we see a plethora of synergistic strategies:

The Top Cards section for Omnath, Locus of Rage doubles down and then triples down on that sweet, sweet land ramp. The rest of EDHREC’s Omnath, Locus of Rage’s page is more of the same - turning Cultivate and every other green spell that puts a land into play into direct advantage, from making big tokens and drawing cards from Elemental Bond or fueling huge X-cost spells a la Genesis Wave.

The Omnath, Locus of Rage deck is truly fascinating because of its many strong interactions. The most well-known of these is Perilous Forays, due to its overwhelming synergy with the commander. The line of play goes as follows: pay one mana and sacrifice one of your 5/5 Elementals to Lightning Bolt a target and ramp out another land, which gives you another token ready to be sacrificed. Essentially, you have as many Bolts as you do mana, at least until you run out of basic lands in your deck.

The deck can easily add on extra benefits to the Perilous Forays trick. Lotus Cobra gives you mana right away, so you can get every basic land out of your deck (should you so choose) without running out of mana. The same is true of Amulet of Vigor. Parallel Lives will put you ahead on 5/5 Elementals. Each of those cards still work outside of this interaction and makes the deck consistently powerful.

Playing Omnath, Locus of Rage means playing a deck that maximizes its interaction with lands, with each subsequent spell contributing to the growing storm of inevitability. The deck looks to just bust right through the defenses of other players, where the commander acts as both an engine in which to lock up the game, or as a warning to players that a single board wipe might wipe them out.

The deck is not subtle, which is often the case for red-green strategies, but it doesn’t have to be. A seasoned Commander player will know just what they are getting into when facing Omnath, Locus of Rage.

Soulshift (No, Not the Mechanic)

Unfortunately, to bring this kind of gameplay over to Esper (the color pairing of white, blue, and black), subtlety and a little subterfuge might be required. This is mainly because ramping lands directly into play is very much outside the modus operandi of Esper decks.

Just looking at the top 4 Esper staples on EDHREC tells us that Esper generates additional mana via artifacts, not cards like Cultivate or Skyshroud Claim. However, for astute deckbuilders, there are a few opportunities to get extra lands out in these colors. Knight of the White Orchid, Kor Cartographer, and EDH All-Star Solemn Simulacrum all do a decent impression.

All three cards above are perfect for something that Esper does very well: blink. The blink strategy utilizes cards like Eerie Interlude or Conjurer’s Closet to double and triple up on Solemn Simulacrum’s enter-the-battlefield effect. Here’s a rundown of Signature Cards from the Blink Theme page on EDHREC: Flickerwisp and Conjurer’s Closet give the Landfall strategy some extra power. While Esper might not have access to Cultivate, hitting multiple Landfall triggers each turn is still possible when you target a land with the abilities from cards like Flickerwisp, Felidar Guardian, or Glimmerpoint Stag.

There are a few other cards that make it easy to achieve multiple Landfall triggers in these colors. Walking Atlas provides both ramp off extra lands in hand and a sweet interaction with Ghost Town and Oboro, Palace in the Clouds. With Atlas and one of those lands in play, you can double up on Landfall each turn cycle. However, it gets even better with a key piece of this Esper Landfall strategy: Retreat to Coralhelm

Similarly, oft-overlooked Ruin Ghost can achieve a comparable loop using Retreat to Coralhelm and any land that can immediately produce white mana.

There are even more Landfall tricks that Esper can pull off. Patron of the Moon, Cloudstone Curio and Crumbling Vestige provide a neat combo. First, use Patron’s ability to put two lands into play, including the Vestige. Those two lands will trigger Curio twice. Return those lands back to your hand with each other’s Curio trigger. The Vestige’s enter-the-battlefield trigger will give you one mana to spend on Patron’s ability again.

What’s great about interactions like these is that fits what the Omnath, Locus of Mana deck does best. Each piece contributes to the deck’s overall goal while becoming much stronger with more pieces in play. For instance, Ruin Ghost at worst can give you an extra Landfall trigger. Retreat to Coralhelm, while being more combo-focused, can help you dig through your library with its scry ability. Patron of the Moon allows for instant-speed Landfall triggers and a bit of ramp (though at 7 mana, that may not be as important). Cloudstone Curio helps reuse blink cards that have already been used before, or can just pick up a land for use in the future.

Now, I’ve spent a bit of time on some of the interactions to generate multiple Landfall triggers, so what are the ultimate payoffs?

Speaking of Retreat to Emeria, the deck also employs Emeria Angel as a way to gum up the board. Additionally, Retreat to Emeria’s +1/+1 ability acts as another way to close out a game, or at least remove a player or two from it.

Admonition Angel and Roil Elemental further the pinpoint control plan, giving the deck the ability to remove or steal pesky permanents. The downside to either of these are their mana costs, where the triple white and triple blue mana can increase the difficulty to cast them.

To round out the deck, some generally great blink targets only add to the deck’s multiple lines of play each turn cycle. Being able to reset Clever Impersonator or Phyrexian Metamorph whenever needed is quite a powerful strategy. Gonti, Lord of Luxury and Diluvian Primordial allow the deck to actually cast Cultivate should you come across one, or, you know, any other great spells.

To wrap this deck all up, I’ve chosen Aminatou, the Fateshifter as the commander. This is for two reasons. First, her -1 ability can blink lands, which only furthers the deck’s mission. Secondly, since this is a Landfall deck in spirit (a la Ruin Ghost), the number of fetchlands, like Flooded Strand, should be high in order to maximize value. The search and shuffle abilities of these fetchlands makes Aminatou’s +1 ability better, in that we can shuffle away a card we don’t want or need from our hand.

I’d like to address the fact that the decklist below does contain a very well-known combo with the chosen commander. Felidar Guardian, Oath of Teferi, and Aminatou, the Fateshifter combine to make infinite mana, and depending on the board, gain infinite life or draw infinite cards. I tend to shy away from such well-known combos for these articles, as I’m trying to promote creativity, but I felt that this deck was an exception, and it’s for the same reasons as discussed earlier: all three cards further the deck’s core gameplan by themselves and happen to come together to form something much stronger. I’ve already touched on Felidar Guardian and Aminatou earlier, but Oath of Teferi is in the deck because the enchantment can blink lands, it assists our commander outside the combo (we get a blink and one-third of a Brainstorm each turn!), and it also assists another great blink planeswalker, Venser, the Sojourner.

Additionally, I will acknowledge that due to the combo mentioned above, some tables may react unfavorably to the deck before seeing it in action. Furthermore, some might wonder why brew an off-strategy deck for a commander that already has an established combo reputation and potential competitive power.

To both, I say go for it anyway. What’s the worst that can happen? You might be hated out of a game, sure, but you’ll always have a chance to shuffle up again.

The land of creativity is vast and deep, and I hope that with this article I’ve shown yet another way to not fall into the trap of un-creative deckbuilding.

See you next month for more color-bending brews!