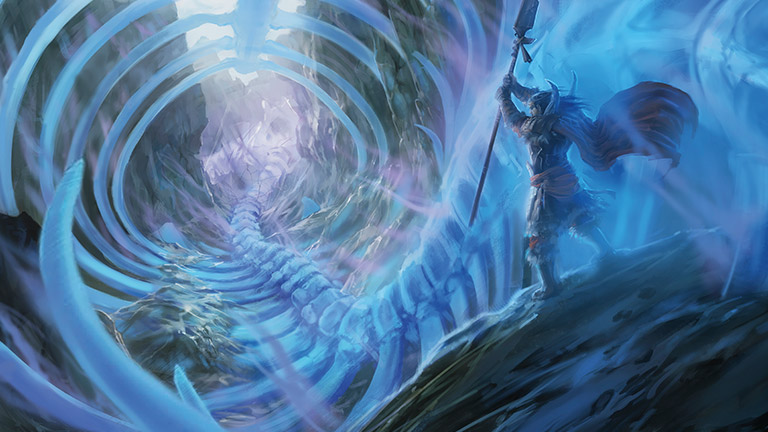 Against Our Very Nature

In Magic: the Gathering, green is the color of all things nature. Organic, not manufactured. And in recent years, at least, the color of all things card draw, removal, and sheer power. But what would happen if we were to be an affront to the very nature that green holds so dear? What if we schemed and planned and manufactured something that is simultaneously both in and out of flavor for green? In this edition of Mind Bend, the article series that breaks down the conventional notions of the color pie to forge new ground outside the confines of the already established, we're going to build Mono-Green Artifacts.

If there's anything nature hates, it's artifacts, especially technology, the symbol of the evils of civilization. From the perspective of the extreme end of green, such things are completely unnecessary. Green has no time to invent things outside a crude bludgeon or a bow; it's too busy running your puny wizard body down with a Craterhoof Behemoth.

Yet, green is the color of harmony in many ways, the most obvious being its ability to find distant lands of the other colors, with Rampant Growth setting that tone all the way back in Mirage in 1996. So why not try to force that harmony with artifacts, as well? Just because they're (mostly) colorless doesn't mean they don't deserve love, too.

Let's ask the advice of the poster child for artifacts in Commander, Breya, Etherium Shaper, and maybe we can port some of her wisdom into the Forest.

Currently commanding nearly two-thousand decks on EDHREC and in the 15th spot overall for the most-played commanders in the past two years, Breya, Etherium Shaper is the top representative on the Artifacts theme page. Here's the average decklist for said artifact theme:

The first surprising thing about this average Breya deck is the sheer amount of ramp, tutoring, and card draw it contains;:I counted at least sixteen sources of ramp or cost reduction, and I probably missed a few. The ramp choices, themselves, are fairly straightforward: format staples like Sol Ring, the Signets, and Chromatic Lantern all make an appearance. Colored mana seems very important, as Breya, herself, has four different colored pips in her mana cost.

For card draw, there are very few direct "Draw a card" effects, save for powerhouse Jhoira, Weatherlight Captain and pseudo-draw stalwart Mystic Forge. Surprisingly, most cards in this category are tutors. All the obvious ones are here: Enlightened Tutor, Fabricate, Trinket Mage, etc. There are also less-conventional tutors like Kuldotha Forgemaster and Sphinx Summoner. Forgemaster makes sense, as Breya, herself, can provide the artifacts needed to activate its ability.

However, the far more surprising thing about the deck is the sheer amount of ways in which the average Breya player can resurrect its broken toys, either to hand or back into play.

The deck runs just about everything, from trade-with-the-graveyard effects, like Goblin Welder and Trash for Treasure, to once-a-turn grabs like Emry, Lurker of the Loch and Hanna, Ship's Navigator, to the full reanimation of Scrap Mastery and the very new (and very powerful) Dance of the Manse.

It seems that, in lieu of drawing cards, Breya decks are more apt to getting back the ones they've already played. Why is this the case? It may be because Breya, Etherium Shaper has two specific ways to win. The first is direct over-the-top wallops via Hellkite Tyrant triggers or a strategic swing while wearing a Cranial Plating.

The second is the sheer number of combos that Breya enables. I was able to spot a few in the average deck, though I'm certain there are more. Eldrazi Displacer coupled with the commander and either Krark-Clan Ironworks or Ashnod's Altar allows for infinite blinks of Breya and, thus, infinite tokens, mana, life, and, most importantly, damage.

Time Sieve and the Thopter tokens made by Thopter Assembly each upkeep yields as many extra turns as you'd like. Thopter Foundry alongside Sword of the Meek builds a Thopter army pretty quickly and straight-up ends the game with the aforementioned Ironworks or Altar.

With this many game-winning potential lines of play, having multiple ways to replay these threats adds additional inevitability, where no turn cycle is safe, nor guaranteed, for Breya's opponents.

Taken as a whole, the Breya, Etherium Shaper artifact deck is not hiding its intentions via subterfuge - it's upfront and personal about the degenerate things it is going to do to the table, and it makes no qualms about doing so. Everything is building towards the combo, and that combo is inevitable.

If we're going to build a mono-green artifact deck that takes at least some inspiration from Breya, we're going to have to solve two distinct problems:

To answer the first, and perhaps more pressing question, we have to look at things in a completely different light. Normally, artifacts in green is like oil and water: they don't really mix. Sure, you can and should usually play Sol Ring in your mono-green deck, outside of very specific circumstances, but there's no Etherium Sculptor to make that Sol Ring more like a Mana Crypt. We can't keep our hands filled with a green version of Jhoira, Weatherlight Captain.

But you know what green really, really likes to do with artifacts? Blow them the heck up. The Commander landscape is littered with mono-green staples, like Krosan Grip, Reclamation Sage, and Acidic Slime, that eat metal for lunch. Perhaps there's a way to make green care about blowing up not only our opponents' artifacts, but our own, as well.

And sure enough, there are artifacts that love to hit the 'yard. Filigree Familiar and Solemn Simulacrum net us extra cards when they die, on top of the nice little enter-the-battlefield effects they provide.

Hangarback Walker, Scrap Trawler, and Treasure Keeper each give us some tokens or cards back from the graveyard whenever they eat dirt. On the higher end of the mana curve, two engines, of the Scuttling Doom and Wurmcoil variety, offer more substantial impacts on the game.

Spine of Ish Sah gets better and better the more times you can let it hit the graveyard. Having a guaranteed way to deal with anything in play (sans indestructible), and being able to do it many times over, is pure gas.

Nexus of Fate (Not the Card, but Close)

However, is there more of a Breya-esque artifact we can blow up than Ugin's Nexus? I think not.

Extra turns are pretty sweet in Commander and help close out games. All we need is Nexus and Reclamation Sage, and we're in Extra Turn Land.

Now, you might notice that Ugin's Nexus has a little extra clause that exiles it when we get that sweet extra turn bonus, so you might think that we'll never be able to take more than one extra turn in a game, right?

We have two cards that can fish Ugin's Nexus out of exile for us. Riftsweeper tucks the Nexus neatly away into our library for us to dig up later. But Karn, the Great Creator is where it's at. With this iteration of Karn, Ugin's Nexus goes right back into our hand, ready to go back into exile after we pop it for another turn. And we can do this as long as Karn, the Great Creator has two or more loyalty.

Believe it or not, there's another way to mess with Ugin's Nexus when it's in exile. We'll have to imprint it on Prototype Portal first, but once it's on there, any artifact sacrifice outlet (or any wayward Acidic Slimes) and we have an extra turn machine!

Since Karn, the Great Creator is in the deck, and since we plan to run a bevy of Reclamation Sages, we are free to run Mycosynth Lattice. Karn plus Lattice means that your opponents can't tap lands for mana, and all other activated abilities get shut down. Your opponents better have creatures to attack with!

It's a brutal combo, so be wise of your playgroup's feelings before bringing this out. However, it's one of those situations where the deck design lends each of these cards to function well outside the known combo, and the deck isn't directly dedicated to pulling it off. Once again, proceed with caution.

Keeping the Karn and Reclamation Sage synergy with Mycosynth Lattice in mind, we can also use Liquimetal Coating as a way to shut down or outright destroy any permanent we so desire each turn cycle.

When I think Liquimetal Coating and Commander, the perfect creature to helm a green deck geared towards destroying our own artifacts, and sometimes our opponents', is none other than Freyalise, Llanowar's Fury. Freyalise, Llanowar's Fury gives us artifact destruction on demand whenever she hits the board, with the potential of doing it again every other turn. Add in some extra blockers/mana dorks and a little bit of card draw, and Freyalise provides all sorts of value.

Rez (Not the Game)

As mentioned with Breya, Etherium Shaper decks, there is a surprising number of ways to replay your artifacts from the graveyard, adding to the inevitability of the deck's strategy. While green isn't known for pulling things back directly into play from the 'yard, it is quite good at getting things back to hand.

One-shot spells like Regrowth and Wildest Dreams give us turns where we can cast both the return spell and the target without much hiccough. On the top end, we have cards that can refill our hands with ease. Creeping Renaissance is fantastic in a deck like this. Since we're focusing on artifacts, we'll be able to get back more than the average deck would. Praetor's Counsel is just solid value in the late game, putting us right back into the fight should our resources be low.

This deck also has a few tricks it can play. Erratic Portal and Temur Sabertooth allow us to constantly replay not only our Manglehorns, but also our Riftsweeper and Eternal Witness. We can also easily rebuy our commander, or Karn, the Great Creator, and just about every enters-the-battlefield creatures for free with Blood Clock and Umbilicus.

Imagine having Mycosynth Lattice out and being able to confidently hit two or three of the most pesky permanents a turn. And that's not even getting into all the nonsense that Strionic Resonator is capable of!

Playing this deck should be a sight to behold. You'll be interacting with the board in a way that people won't expect at first and then will realize its synergies hopefully too late. Even after people are aware of your specific set of artifact shenanigans, your recursion should help keep you above water most of the game. Your biggest troubles might come from go-wide strategies, so keep an eye on what's popular with your meta and tweak the list to fit the gameplay.

A Fresh Coat of Paint

We've found a way to Liquimetal Coating a green deck to give it that metal artifact sheen. It just goes to show that one way to separate yourself and your decks from others at the table is to perhaps lean into what your colors do best, but from a completely different angle. You'll often find yourself at a nexus - stay on the path of the established, or venture into the unknown.

Until next month, where more mind-bending decks will abound!