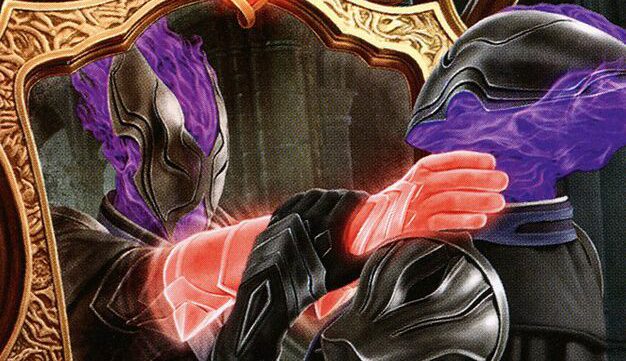 Hello! Welcome to Nearly Identical, a series where I examine two commanders that share similar designs and archetypes, examine what sets them apart, and determine which should be your next commander. Today I'll be looking into a unique set of mono-red commanders that copy our creatures: Delina, Wild Mage and Jaxis, the Troublemaker.

Today's topic doesn't quite have its own archetype. If we look at the most popular themes for both of our commanders, we see that it's Treasures. I'll be honest, these don't look like Treasure commanders to me. We see a lot of Treasure-makers in their lists, like Dockside Extortionist, but that's not what these commanders are all about. They occupy a unique archetype that I'll be referring to as 'Mono-Red Creature Copy'.

'Creature Copy' is a reference to the theme 'Spell Copy', which focuses on copying spells as they're being cast. To define what Creature Copy is, I want to showcase which other commanders fall into this archetype. Kiki-Jiki, Mirror Breaker is our most infamous example. Setting aside the long list of things that create an infinite combo with Kiki-Jiki, his ability at its core is all about creating token copies of creatures we control. Feldon of the Third Path only copies creatures from our graveyard, but he overall still shares a lot in common with this archetype.

Rionya, Fire Dancer is where we really started to see this archetype get explored more in the current designs for mono-red commanders. She can make multiple copies of a creature, but only equal to the number of spells you've cast this turn plus one. In my opinion, she's the most explosive of the lot, and much like how Feldon leans into an artifact theme, Rionya falls into the spellslinger theme.

This is what sets these commanders apart from Delina and Jaxis, whose themes aren't as clear-cut. So let's explore those two some more!

Prepare for Trouble (And Make it Double!)

Delina, Wild Mage and Jaxis, the Troublemaker can each make a token copy of a creature we control. Delina has to attack in order to copy something and then we'll need to roll a d20. If we roll high enough, we'll get the chance to roll again to make even more copies! We could make infinite tokens, in theory, but the odds are against us. Jaxis, on the other hand, requires us to pay red mana and discard a card in order to copy something.

Based on data from fellow EDHREC writer, MTG_DS, Delina and Jaxis have a similarity coefficient of 78%, meaning that there is a 78% chance that a card drawn at random from one of the Delina decks on EDHREC is also run by at least one of the Jaxis decks on EDHREC.

When we look at the cards that have the highest mutual synergies between these two commanders, we get a clear picture of what they both care about. We want to copy creatures like Mindclaw Shaman and Circuit Mender to generate a ton of value over our opponents and eventually get to the point where we can repeatedly burn them with effects like Fanatic of Mogis. It's a solid gameplan, but we'll need to give them distinct identities in order to see their potential. To do this, I'm going to turn Delina into a burn commander to best take advantage of potentially making multiple token copies a turn. For Jaxis, I want to look into how we can turn that discard cost into our deck's main engine.

Delina, Wild Mage has a dice-rolling mechanic from the Adventures in the Forgotten Realms set, which triggers whenever she attacks. Unfortunately for Delina, she's a 3/2 with no form of evasion nor protection that'll let her survive combat, so we'll be devoting a portion of our gameplan to making sure she can stick around.

Key to the City and Cliffhaven Kitesail are ways that we can ensure that Delina will survive combat. Commander's Plate will protect our commander from most spells of the other four colors while makings her a deadly unblockable 6/5.

Now that we've covered how we'll make sure we can attack each turn, let's go over our gameplan.

Delina has a high ceiling. Each turn, we could make multiple copies of a single creature. Fanatic of Mogis is one of our best wincons for the deck, but we also want other permanents that will burn our opponents. Impact Tremors and Purphoros, God of the Forge are the most popular examples of this type of strategy, and we recently got a new burn creature in the form of Witty Roastmaster, which, if we copy him, will lead to an exponential amount of damage, as each copy of him will see the others enter.

The last thing to discuss for Delina is what happens to our tokens once we've made them. If we rolled lower than 14, we'll only get to make one token that'll enter tapped and attacking and will sadly be exiled at the end of combat. That's a pretty short lifespan for these guys; we can't even take advantage of sacrificing them to an Ashnod's Altar. Thus, we'll need to look at cards like Goblin Bombardment to allows us to sacrifice creatures at instant speed. Similarly, Dark-Dweller Oracle and Culling Dais will turn those token copies into card advantage!

With that, we're ready for a Delina decklist!

Give 'em the Ol' One-Two

Jaxis, the Troublemaker is the newest addition to this Mono-Red Creature Copy archetype. Unlike Rionya and Delina, Jaxis doesn't care about the combat step. Instead, she gives token copies a pseudo-Blitz ability that gives the tokens haste and causes them to be sacrificed at the beginning of the next end step, drawing us a card when they die. This means we can take advantage of cards like Atsushi, the Blazing Sky that have death triggers. Jaxis gives a lot of value for simply paying a red and discarding a card. However, she's limited to only copying something once. Therefore the real focus of this deck will be on utilizing her discard ability.

We have some great options for Jaxis that'll turn her downside into value. Containment Construct is perfect for this list, as it'll let us play our lands even if we discard them to Jaxis. Conspiracy Theorist works in the same way, so we can still play out our spells while looting. Surly Badgersaur has many different effects that'll have us strategizing which cards to discard in order to get the desired effect. These are all great ways to make use of Jaxis's discard cost, but what do we do with the cards once they're in our graveyard?

If I could make a mono-red reanimator with Jaxis, I would, but sadly, we only have a few ways to recur nonartifacts from the graveyard. Feldon of the Third Path is the most well-known example, making artifact copies of creatures in our graveyards that'll be sacrificed at the end of our turn. In Crimson Vow, we received Dollhouse of Horrors, a five-mana artifact that'll exile the creature from our graveyard and turn them into Constructs! Only 0.001% of Jaxis decks are running Dollhouse of Horrors, but I think it's a very solid way to bring back creatures that we discard. The best part about Feldon and Dollhouse is that we can still copy the tokens with Jaxis, so it doesn't matter if they're artifacts or Constructs.

Lastly, I wanted to mention an odd inclusion in the deck, but one that I think will be one of Jaxis' best wincons. Fathom Fleet Swordjack has the Encore mechanic, and when it attacks, it'll deal damage to the defending player equal to the number of artifacts we control. After looking over the list I brewed for Jaxis, I noticed it contained a lot of artifacts, and since we have some Treasure-makers in the deck, I think our artifact count will add up quickly. Plus, since Jaxis can discard Fathom Fleet Swordjack into the graveyard, we can ensure it gets to Encore whenever we're ready to end the game.

I'll also note that I tried to stay away from adding in a ton of impulse draws to Jaxis' list. Despite being red's main form of card advantage, we can't discard away cards that we exiled. I therefore wanted to briefly mention Anje's Ravager and Humble Defector, which will quickly fill our hands when we get multiple copies of them out on the battlefield.

That's the Difference Between You and I

Delina and Jaxis aren't super popular commanders at the moment. Delina, Wild Mage holds 700 decks, and Jaxis, the Troublemaker, who only came out in Streets of New Capenna, has 300 decks. Neither of these commanders has made a large impact yet, but it's great to see some love for this archetype. As I mentioned earlier, Rionya is the most explosive of the commanders in this Creature Copy archetype, and she has about 1,400 decks to her name, and I think it's possible that the limitations Delina and Jaxis each have are just enough for them to not have a large appeal by comparison.

I get why Rionya's more popular, but her style lends her deck to more of a Storm type of build, and that's just one way to experience the Creature Copy archetype. For me, the limitations are what make commanders interesting, and when you can take a commander's limitations and turn them into a strength, you'll find that the downsides, like discarding a card, can actually turn into the engine for the whole deck.

So, which commander would you rather build: Jaxis with beneficial discard, or Delina with some wild dice-rolling? Let me know in the comments!