Nearly Identical - The Ur-Dragon or Tiamat? 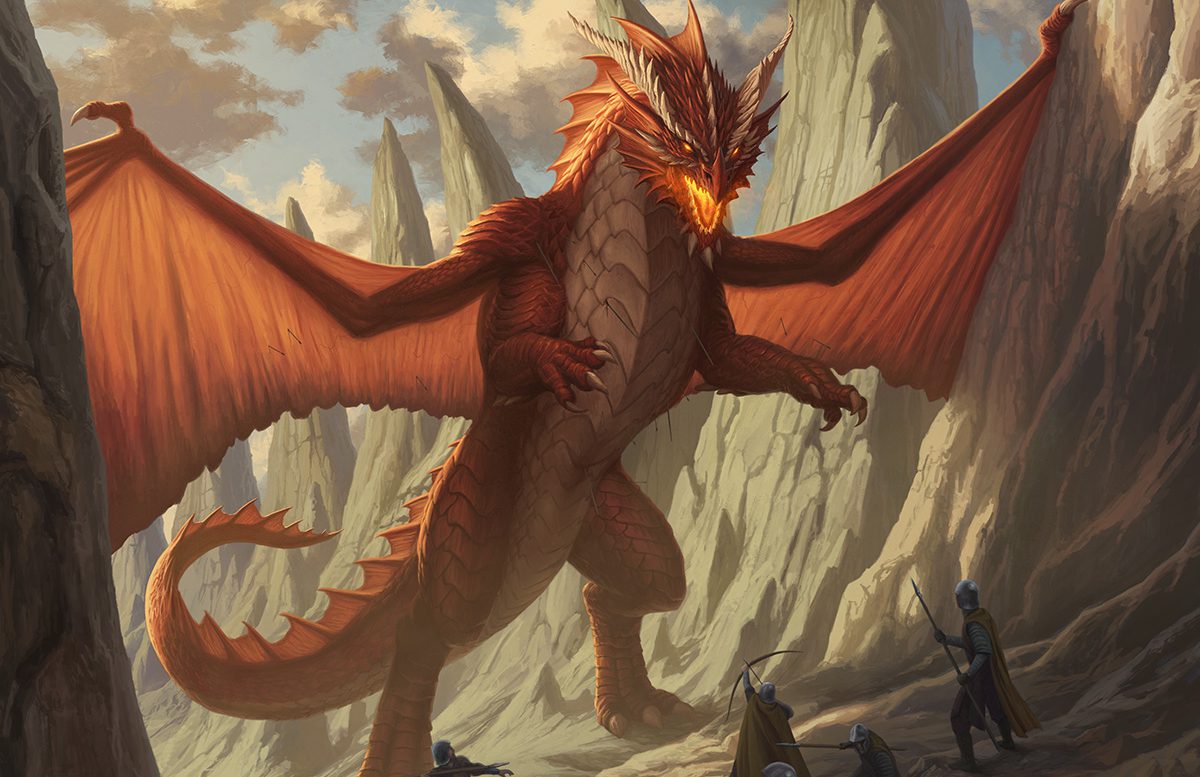 You Enter the Dragon's Lair

Hello! Welcome back to Nearly Identical, a series where I examine two commanders with similar designs and archetypes, explore what sets them apart, and determine who should be your next commander. Today, I'll be talking about two commanders from the very popular Five-Color Dragon Tribal archetype: The Ur-Dragon and Tiamat.

Dragon tribal is a well-beloved archetype, with The Ur-Dragon leading over 7,000 decks dedicated to the tribe. While five-color is the most popular color identity in Dragon tribal (because why wouldn't you want to have all the Dragons?), we've seen newer Dragon commanders recently, such as Firkraag, Cunning Instigator and Miirym, Sentinel Wyrm. However, none have come close to the Ur-Dragon's throne. Despite that, in the Adventures in the Forgotten Realms set, we saw the introduction of a new five-color Dragon, Tiamat.

Tiamat is the second-most-played five-color Dragon commander behind The Ur-Dragon, with Scion of the Ur-Dragon in third place. While Scion of the Ur-Dragon seems the most comparable to Tiamat (since both tutor Dragons out of your library), we can see from data provided by EDHREC writer MtGDS that Tiamat and Scion have a similarity coefficient of 88% (rounded up), which is high but doesn't compare to the similarity coefficient of 91% shared between Tiamat and Ur-Dragon. That means that there's a 91% chance that a card pulled at random from a Tiamat deck on EDHREC is also run by at least one Ur-Dragon deck. So, what's the real difference between an Ur-Dragon deck and a Tiamat deck?

There've been Dragons in Magic: the Gathering for as long as the game has existed, so all the most powerful, the most broken, and the most expensive Dragons can be found all across The Ur-Dragon and Tiamat's EDHREC pages. The strength of The Ur-Dragon is that simple-yet-design-breaking Eminence ability, where all your Dragons cost one less mana so long as The Ur-Dragon is in your command zone or on the battlefield, which is pretty big. If you ramp on turn two, you can cast a Goldspan Dragon on turn three. Having a cost-reducer right in the command zone lets all your nasty, appropriately-costed Dragons come down a turn early.

While The Ur-Dragon ramps you, Tiamat is more of a toolbox commander, letting you grab the five best Dragons in your deck. It's a hefty cost to cast her and then to cast what you tutored, but it's a surefire way to get your gameplan going.

As with any tribal deck, both commanders want lots of creatures in the 99 that have tribal synergies. Scourge of Valkas rewards Dragons entering the battlefield, Atarka, World Render rewards us swinging with our Dragons, and Silumgar, the Drifting Death rewards us by controlling the board and the sky.

So, is having a ton of Dragons all we need? According to Scryfall, there are 302 Dragon creatures playable in EDH, so do we just pick the top 30ish and call it a day? To make our commanders distinct from one another, I'm going to focus on the combat step for The Ur-Dragon and build an Extra Combat theme deck, and for Tiamat, I want to lean into the flavor of Dragons hoarding treasure and build her a Treasure deck!

The Progenitor of Fire

The Ur-Dragon is a Dragon Avatar, with wings that extend across the eternities. Reading the flavor of The Ur-Dragon truly puts you in the mindset that this Dragon is all-encompassing and the most powerful of all Dragons. It leads an army of Dragons that want to attack, and so I'll be focusing on this theme by adding extra combat spells to get the most value out of our attack triggers.

Relentless Assault is a classic example of an extra combat spell. It's simple and an efficient cost. Hellkite Charger is one of few Dragons that can enable extra combats, albeit at the expensive cost of needing to pay seven mana. It's not optimal, but late game, we should have the spare mana to make this work when we need to win. The newest extra combat staple is Karlach, Fury of Avernus, who gives our team first strike to help strike down any blockers without losing our own army. Moraug, Fury of Akoum is another extra combat enabler so long as you play your lands correctly, and on top of that, he buffs our Dragons each time they attack. There are other extra combat spells we can talk about, but these four fit what we're looking for and fit our budget.

The Ur-Dragon is the 5th most played commander in EDH, with almost 9,000+ decks. Finding a unique combination of Dragons that haven't been done before is going to be difficult. So for my build (and speaking of budget), I wanted to give myself a monetary restriction that every card has to be $5 or less. There are so many expensive Dragons out there: Old Gnawbone is $41 right now; the new Ancient Copper Dragon is $57, and that's the cheapest version. I can give you a list of the best Dragons, but I wanted to build something that I'd be comfortable with. Everyone has their own price threshold, but $5 felt like a good stopping point to ensure that I'm not just including the most expensive ones, and there are still a lot of good cheap Dragons!

The new Wrathful Red Dragon is an excellent piece of protection that'll have opponents hesitating if they want to block our Dragons, Sylvia Brightspear gives all our Dragons double strike on a small body, and Kindred Discovery is barely under $5 after a much-needed reprint. Now that our gameplan and support pieces are covered, let's take a look at some great budget options that'll fill in any holes we might have while still remaining within our budget restrictions.

Spell Rupture is a solid counterspell that scales as we play more powerful Dragons. Crystal Dragon is a nice recursion spell that'll help bring back key permanents that might have been removed. Lastly, I can't argue enough for more players to run You Happen On a Glade in decks that really need the mana fixing. It's not ramp, but in a budget deck that won't be running fetchlands, it's a way to smooth out your manabase while also being a recursion spell late game.

Tiamat can tutor the best five Dragons in our deck. However, she costs seven mana to cast, and we can't even blink her to reuse that enters the battlefield trigger, so unless we plan on recasting her for a second time at nine mana, we should make her ability count.

When I look at Tiamat, I see a big Dragon that'll take a whole turn to cast and will tutor for Dragons that we can't cast until our next turn. We've got a surplus of Treasure-makers in the last year or so, and some of the most notable have been Dragons, so, I want to use Treasures as a way to potentially cast at least one or two Dragons on the same turn we play Tiamat. Old Gnawbone and Ancient Copper Dragon will make a ton of Treasures when we deal combat damage, and Goldspan Dragon will make all the Treasures we have generate two mana instead of one. But what do we do with all this Treasure?

Rain of Riches will possibly cascade us into even more Dragons or any other Treasure synergies we have on the list. Swashbuckler Extraordinaire helps us close out games by giving all our Dragons double strike, and Marionette Master will turn our Treasure hoard into damage. However, what happens when our plan is foiled? What other wincons do we have in the deck?

Maskwood Nexus + The World Tree will allow us to take every Dragon in our library and put it onto the battlefield. If you can pull this combo off, you can win through any number of means, such as Terror of the Peaks and/or Scourge of Valkas. Ancient Gold Dragon makes you a ton of blue Faerie Dragons that'll destroy your opponents if you have Dragon Tempest on the field. Finally, what better way to close out a game than with a 10/10 flying trample Earthquake Dragon that can be brought back over and over again if it gets removed.

There Can Only be One Mother of Dragons

It's clear that The Ur-Dragon's popularity is unmatched. Tiamat only has 2,800 decks and probably won't get anyway near the same number of decks as Ur-Dragon. Players have already spent their most recent draconic energy building Miirym, Sentinel Wyrm, which achieved 3,400 decks in just a month. It'll be a while before we get another Dragon tribal commander. Does this mean Tiamat isn't a powerful commander? Absolutely not! Being able to tutor five of your best creatures is insane value, but I think the seven mana to do so (no blinking or recurring) is what holds this commander back for players looking for more power.

So which commander would you rather build: The Ur-Dragon that can swing for lethal, or Tiamat that'll tutor for value? Let me know in the comments below!