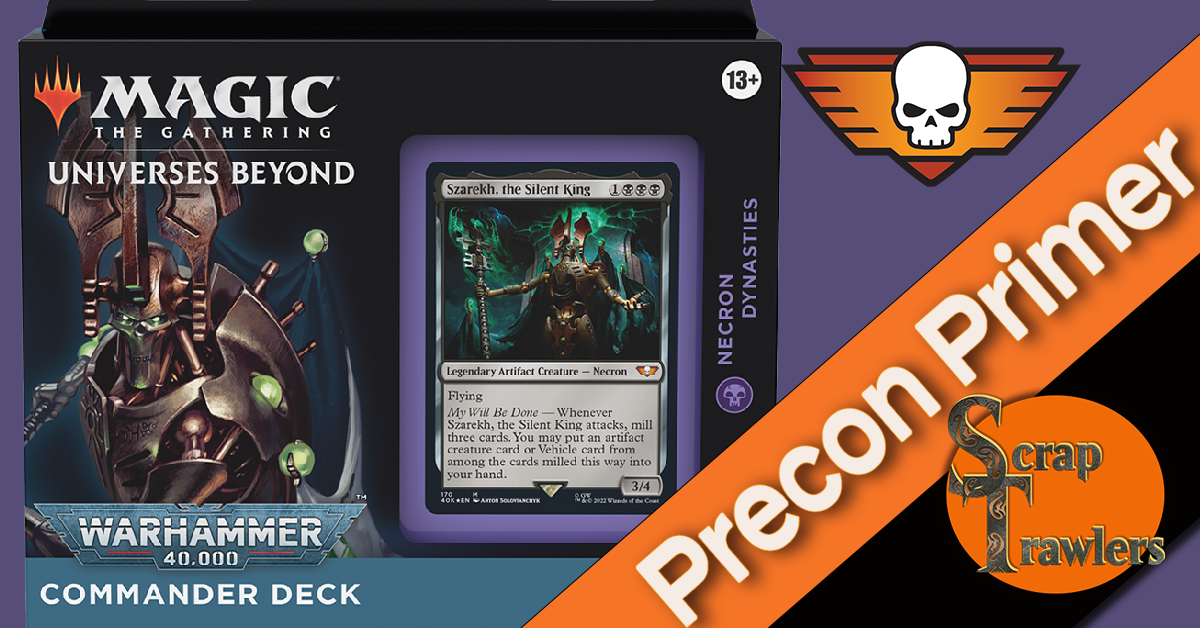 Hey everyone, this is Lenny from the Scrap Trawlers, where we do EDH on a budget. You may also know me from my Power Sink articles on EDHREC. Today we’ll be taking a look at the Necron Dynasties Commander deck from Universes Beyond. I'll be talking about the legends, best cards, and overall strategy. If you're looking for upgrades, they're coming in a future article.

My Will be Done

At first glance, Szarekh seems pretty mediocre. A 3/4 flier for four mana that mills 3 cards on attack feels more like a draft card than the face of a Commander product, even if you do get to keep an artifact creature or vehicle from among those cards. Rather than be the focal point, Szarekh supports the deck by accruing card advantage and filling up the graveyard and he's less likely to be a target because of this. I think of the available legendary creatures in the deck, this one provides the most consistent gameplay playing out of the box, but it's worth discussing the four other legends that can lead it into battle. Anrakyr the Traveller lets you pay life to cast artifacts out of your hand or graveyard, but needing to attack for that may be a liability in a deck without hast. Imotekh the Stormlord can produce a lot of tokens, and even gives some evasion, but may struggle if if can't find the cards to set off it's trigger. Illuminor Szeras sacrifices creatures to make mana, which can help you get to some of the awesome high cost cards in the deck a bit sooner, but may stumble if you can't find card advantage to make up for the things you're sacrificing and ramping out. Trazyn the Infinite gains the activated abilities of all the artifacts in your graveyard, making it a powerful and unique combo card that belongs in a different deck. With the eck as it is, Trazyn is likely to do nothing when you draw it. With potential commanders out of the way, let's dive into the 99.

Their Name Is Death

As befitting a race of immortal robots, this deck is looking to play the long game by deploying and recurring artifact creatures to exhaust opponents' resources in a war of attrition until we can overcome them with our attackers. Many of the creatures in the deck are geared toward taking other creatures with them. Lokhust Heavy Destroyer is another variation on the classic Fleshbag Marauder except it flies and can come back for a repeat performance through it's unearth ability. Necron Deathmark destroys a creature when it enters and being a 5/3 creature it has a good chance of taking out another creature or a chunk out of an opponent in combat. Shard of the Void Dragon is probably the biggest bomb in the deck. It's likely to catch removal, but if it sticks you'll have a rapidly growing flier that makes your opponents sacrifice a nonland permanent with every attack.

Skorpekh Lord and Triarch Stalker both provide menace to your most of your team, which serves as a way to get damage through, but it's also a way to force uncomfortable decisions if your opponents don't want to block. It's worth nothing that the Triarch Stalker also gives menace to your opponents if they attack the player you named. Canoptek Tomb Sentinel can get in some decent damage, but thanks to vigilance and it's ability to exile a permanent if it enters from graveyard, it makes for a decent deterrent for attacks. Skorpekh Destroyer is another creature that presents a difficult choice on if an opponent wants to block and lose a creature to deathtouch or take four damage.

The true power of the Necrons lies in their ability to reuse their soldiers over and over again, and we get plenty of fantastic new tools to do this with. Technomancer brings back artifact creatures with a total mana value of up to six when it enters the battlefield this pairs very well with nCryptek and Resurrection Orb which return a creature to the battlefield when it dies. Throw in a sacrifice outlet like Illuminor Szeras or Chronomancer and you have a powerful recursion engine.

Ghost Ark is a powerful new vehicle that grants unearth for three mana to every artifact creature in your graveyard when you crew it. This can get mana intensive and you have to be careful how you use it since unearth exiles the creature, nevertheless you an set up come explosive turns with this. Lychguard returns all legendary creatures from your graveyard to your hand, which I'd like more if the deck had more than five of them. Finally, Out of the Tombs is, I think, the most interesting new card from this deck. It's a fairly effective self mill engine, but also prevents you from losing the game by drawing from an empty library by letting you reanimate a creature instead. This makes it possible to turn card draw into a massive reanimation spell, just watch out for that graveyard hate.

The deck also contains a token package to help give us sacrifice fodder, blunt attacks, and overwhelm opponents in the late game. With all the artifacts leaving our graveyard Imotekh the Stormlord is likely to flood our board. Biotransference turning our creatures into artifacts in all ones isn't doing all that much in this deck, but we are more than happy to get a token every time we cast one of the many artifacts in the deck. Royal Warden makes two token when it enters the battlefield and fits very well in the reanimator framework of the deck and can even unearth itself in a pinch. Their Number Is Legion costs a lot for what it does, but it's at least a welcome sight when you need that late game spell to push you over the top. I didn't like Canoptek Scarab Swarm at first, but after playing it and making over a dozen fliers by exiling my own graveyard, I'm a fan.

The War in Heaven

When playing this deck remember to focus on the long game. Try to start with about four mana sources as most of the deck starts at that mana value and you want your commander attacking early on to get value. Don't be afraid to lose your creatures in combat, especially if you take out an opposing creature, you're just going to get them back anyway. Ultimately you're looking to survive until you can drop a Living Death or Ghost Ark with a full graveyard or clear out your opponents' forces with Their Name Is Death, but you can occasionally get some surprise kills by putting Cranial Plating on Szarekh.

There's a lot to like about the deck, but it's not without it's flaws. Self mill and reanimator can be a strong combination, but newer players often don't see the value in losing cards and milling an important spell you can't get back is a major feelbad. Much of the deck is at mana value four and above and many of the cheaper cards are either reactive or require other pieces to work. This means you'll often be playing only lands for the first few turns and more aggressive decks can put you in a tight spot before your game plan comes online. Some of the cards are also not a great fit. Shard of the Nightbringer having a cast trigger is a real disappointment with no way to get it back to hand, and Trazyn the Infinite and Convergence of Dominion don't really do much in the deck.

Playing against the other Warhammer decks, this one does very well despite having fewer colors. I think this one is a bit stronger than the others, but the decks form a balanced pod though the battlefields can get clogged with no good attacks. You'll want to be careful when you use your removal. You can't make an army like the Imperium and your creatures won't be as big as the Tyranids so you want to bide your time and wait come back from near death with a board wipe and a mass reanimation effect. With this deck you spend a lot of time on the back foot, but you're one card away from completely turning the game around.

As with the other decks in this release, Necron Dynaties is packed with awesome new cards, but which among these are the best? Sceptre of Eternal Glory is a mana rock gives mono colored decks a bit of love by rewarding you for running basics. I expect to see this one show up in a lot of techs, especially mono black where you tend to need a lot of colored mana. Soldevi Adnate is one of my favorite cards of all time, so naturally I need to shout out the legendary version we got in Illuminor Szeras which I think a lot of sacrifice decks are going to want. Finally Tomb Fortress is a reanimator effect on a land, making it very easy to put into decks.

New cards are very much the focus in this product, but we got a few solid reprints as well Living Death is a classic card that sees play in 45974 decks on EDHREC. Mystic Forge is powerful card advantage engine for artifact and colorless decks that had crept above $10 and hasn't seen a reprint since Core Set 2020. Caged Sun is staple for mono colored decks and its good to see a few more circulating. Perhaps the most surprising reprint from this entire release is Darkness. We haven't seen this reprinted since Time Spiral and it's nice to finally get a version with art from someone who isn't a known white supremacist.

Necron Dynasties is good deck to buy if you're starting out in the format or if you're a more enfranchised player looking to have a precon to keep together. It plays well out of the box, is forgiving of play mistakes, and it's easy to change and upgrade as artifacts and reanimator are themes that show up in most sets, and the cards in the deck are easy to fit into future decks if you decide to take it apart. For players with more time who don't want to keep the deck, I'd say look at buying singles you want and make a decision based on that. Overall I think this is a great release and if this is a sign of what's to come with Universes Beyond then I'm excited to see more. Let me know in the comments what you think and what your plans are for the cards are from this release.