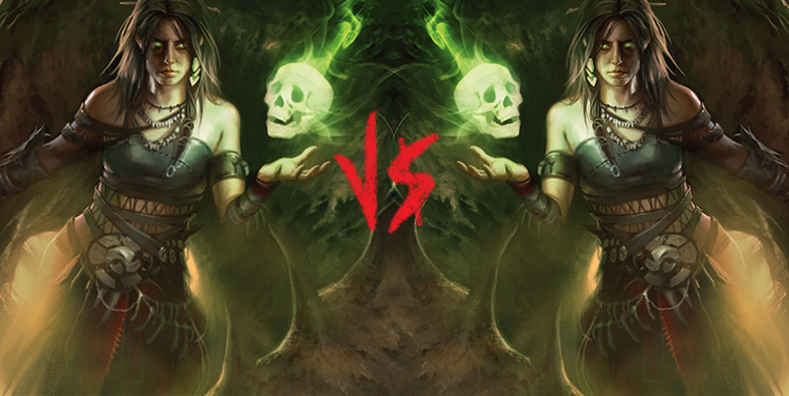 Watch out world, because EDHREC has a brand-new feature in town. You may remember when we unveiled our new Theme Selection tool back in September. For those who don't remember, it's the thing to the right of the pie chart that looks like this: That's the Theme Selection tool for The Scarab God. Using these options, you can choose to see statistics for all decks, or decks that bias toward a certain tribe, or no tribe at all, or towards mill, and so on. Some folks like Scarab God Zombies, others like Scarab God Goodstuff, and it's helpful to differentiate the two so you don't see recommendations for cards you don't actually want to play. Depending on the commander, there are lots of possible themes, so you can select the one you're most interested in to tailor recommendations more closely to your deckbuilding preferences.

Now there's something new added to the Theme Selection tool. Take a look at the themes for Meren of Clan Nel Toth, and see if you can spot the difference: That's right, we've added a budget selection tool! Beyond tribes and counters and mill, you can now choose to view either very expensive decks, or very budget decks!

How Does This Work?

That idea was attempted, but it didn't work out very well. By setting a limit to see only decks with total price $50 or below, or $100 or below, or $500 or more, it skewed the numbers a bit too much, especially for five-color decks with expensive mana bases. Plus prices tend to be, for lack of a better word, arbitrary; Atraxa, Praetors' Voice is currently $25, which would eat up quite a lot of the budget for a $50 or less datapoint. Rather than picking a specific price, choosing the cheapest 10% of decks and the most expensive 10% of decks provides a nice range for each commander.

Why Do This At All?

Because prices can screw with statistics. Take a look at the Top White Cards page and look at the difference between Swords to Plowshares and Path to Exile. They're both hyper-efficient removal spells that exile any creature for a single mana, and the two most popular white cards in EDH. Yet despite their similarity, they have a significant statistical gap between them. Swords to Plowshares, at less than $2, shows up in nearly half of all white EDH decks. Path to Exile, at $8, shows up in just below a third of all white EDH decks.

Let's take a look at this new Budget tool in action to illustrate what I mean! Our case study today is Meren of Clan Nel Toth. If you'd like, you can check out the results yourself by clicking here for the Budget: Cheap option, and here for the Budget: Expensive option. For the rest of you, I'm busting out my old Venn Diagram tool from my regular Commander Showdown series!

As usual, this Venn Diagram compares the Top and Signature Cards for each commander—or in this case, for Cheap Meren and Expensive Meren. Let's see what kind of results we get!

Holy wow, these are some very different lists! Right off the bat we can see that the recommendations for budget and expensive decks are vastly dissimilar. Let's look closer and see if we can't notice any specific trends from those lists.

As can be expected, Cheap Meren's Top and Signature Cards bias toward the Precon Effect. Since Meren originated from a precon, the most budget-friendly option to build her is by just picking up the Plunder the Graves product. What I'm most interested in are the cards in the Both column. There are only four: Eternal Witness, Sakura-Tribe Elder, Skullclamp, and Victimize. When both low-budget and high-budget players agree on a card, it's worth paying attention to. Eternal Witness in particular is a great recursion engine for Meren, and nothing ramps up your mana like Sakura-Tribe Elder.

Meanwhile, the Expensive Meren list is absolutely stuffed with tutors. Demonic Tutor, Green Sun's Zentih, Birthing Pod... it comes as no surprise that high-budget players like their decks to be consistent, and there's nothing like a tutor to make your deck run more consistently. Of course, there are also all the pricey lands, from Verdant Catacombs to Bayou.

What grabs my eye are the inexpensive cards in Expensive Meren's column, yet don't show up in the Both column. Caustic Caterpillar, Fleshbag Marauder, Merciless Executioner, Reclamation Sage—these cards are all under $1 and excellent selections for Meren players, yet they don't show up for both versions. This is a really good lesson for players on a tight budget. Don't disregard the Budget: Expensive tool completely just because most of the cards are out of your price range. You may find some really great and perfectly affordable cards among those expensive decks. Instead of finding a diamond in the rough, you could find some high-quality rough amongst the diamonds! After wading through cards that came in the precon, we can find inexpensive cards on Cheap Meren's page, such as Jarad's Orders, which lets you tutor for cards, just like all those Expensive Meren players. Lower down in the Artifacts section, we find Ashnod's Altar, a fantastic sacrifice outlet that helps you rack up the experience counters. Speaking of sacrifice outlets, there's also Evolutionary Leap in the Enchantments section.

That's the other valuable takeaway when using this new tool: don't get too hung up on high percentages. These recommendations are more closely tuned to your preferences, which means even the lower-percentage recommendations are still worth your attention. True, Gray Merchant of Asphodel only shows up in 20% of Cheap Meren decks, but he's an excellent card to revive over and over with Meren's ability. Grim Haruspex only shows up in 28%, but his synergy with sacrifice outlets is just plain fantastic. To get the most value out of this new feature, make sure you don't ignore the underdogs.

As long as I have you, I want to draw your attention to some great cards for Meren that go under the radar. Check them out:

I don't know about you, but I'm pretty excited about the new Budget selection tool. I have a deck or two that are incredibly high-budget, and this new feature should help me weed through the statistics to find better matches for decks like mine. I also have a much greater number of low-budget decks, and these tools will be very helpful to find great new cards in a reasonable price range.

Enjoy the new feature, and let us know what other features, themes, and tools you'd like to see on the site!