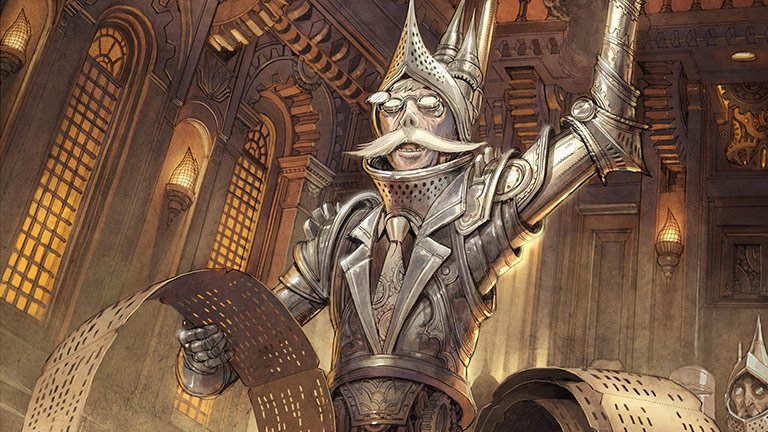 Yes, you read the title correctly. No, this is not a joke. In fact, here at EDHREC we were actually thinking about doing an "Un-cards are legal!" prank for the next April Fools. Turns out the Rules Committee beat us to it and legalized silver-bordered cards in Commander until January 15th.

I'll repeat that again: Until January 15th (the date of the next banned and restricted announcement), silver-bordered cards will be legal in Commander. For more information, I highly recommend checking out the official announcement.

Naturally there are some stipulations. Several cards are still banned, primarily from the original silver-bordered sets, Unhinged and Unglued. The list is as follows:

That's right, The Almighty Creator Richard Garfield is not legal in Un-mander. I don't know who the Rules Committee think they are, banning The Garfield like that. They sure have some nerve!

Jokes aside, these cards actually do represent some difficult-to-parse rules scenarios. Time Machine and the suite of "Double" cards are especially tough to keep track of, since they have effects in multiple. Because EDH is a multiplayer format, keeping track of which opponents you've Double Played and which opponents you've Double Crossed isn't exactly easy, so it's probably better to just not have to worry about them at all.

Thankfully, the Ashnod's Coupon and R&D's Secret Lair combo has also been stopped in its tracks, so your opponent can't force you to pay for their drinks. Plus Staying Power is gone, which is a huge relief. It looks funny at first, but just imagine trying to calculate the power of your creatures after the effects of a Mirror Entity, Agony Warp, Overwhelming Stampede, and a Mutilate.

A few other cards have also been labeled as headache-inducers. They're not banned, since they don't break the game in half, but they don't exactly strengthen friendships, either.

Though silver-bordered cards were designed with the intention of creating a super-silly, ultra-fun gaming experience, not all of them hit the mark. The above cards are allowed, but understandably aren't fun for all players. There's already a sizable population of players who dislike Group Hug strategies; just imagine what they'll say if you cast Incoming!, the most obnoxious Group Hug spell of all time. As much as we all enjoyed https://www.channelfireball.com/articles/what-if-all-creatures-in-magic-would-enter-the-battlefield-at-the-same-time/ this article about what would happen if all creatures entered the battlefield at the same time, it's a nightmare to actually figure it out.

Sheldon Menery, the head of the Rules Committee, has also put out a recommendation to avoid cards with the Gotcha mechanic, such as Kill! Destroy! and Spell Counter. Though funny at a glance, these cards are famous for shutting down communication during a game. It's easier to just not speak at all than risk giving your opponent back their counterspell. Commander nights are usually a time when folks like to sit back and have fun with friends, so mechanics that discouraging speech probably won't create the best gaming environment.

I'll echo the official announcement from the Rules Committee and simply ask that if you play these cards, you play conscientiously. Not all silver-bordered cards are fun for all players. If your opponents ask you to stop that Stop That, at least hear them out.

There are two final pieces to this announcement: Second, Spike, Tournament Grinder still operates within the confines of Rule 13. For those unfamiliar, that's the rule that discusses cards outside the game, and it states the following:

“Abilities which refer to other cards own outside the game do not function in Commander without prior agreement on their scope from the playgroup.”

In other words, if you want to run Burning Wish to find an emergency sorcery, you'll have to clear it with your group before the game. Some groups will allow you to find any card from your collection, while others would prefer you stick to a fifteen-card sideboard limit, and others still would rather not deal with outside-the-game effects at all. I personally run Spawnsire of Ulamog in my Kruphix, God of Horizons deck, but only because I've run it by my group and they've all agreed that it's hilarious to dump a bunch of random Eldrazi onto the battlefield.

Spike functions the same way. If you want to use her ability to find cards from outside the game, you'll need to ask the group beforehand. Since Ashnod's Coupon and R&D's Secret Lair are now technically banned in a Constructed format, she can assemble that nasty combo. I think that's reason enough for your opponents to have final say over what is or isn't out-of-bounds.

As can be expected, this announcement has been met with mixed reactions. A great many are excited; lots of players have been asking for weeks whether legendary Un-Commanders will appear on EDHREC. (Spoiler alert: they won't.) Silver-bordered cards give us Magic players a chance to let our hair down. Rather than constantly grinding for value and min/maxing to clinch every possible chance at victory, Unstable and its ilk remind us to embrace the casualness of the Commander format and just have a stupidly good time.

Others remain skeptical. To put it simply, it is a strange world to live in where you must enforce a house rule to play regular EDH. Lots of players were planning on playing casually with Unstable cards anyway, but turning all of Commander into Un-mander forces a new dynamic onto the players that didn't want to. It appears heavy-handed, or at the very least, an inelegant solution.

It's a tough topic to discuss, since any player who complains about this announcement runs the risk of sounding like a nasty Grinch Who Hates Fun. We Magic players are famous for our resistance to change; remember how smoothly the Tuck rule change went down? There's often a “The Sky is Falling!” vibe in the air whenever a new rule comes down from on high. However, we do a disservice to our fellow players if we immediately characterize their passionate reactions as mere overdramatization. Players aren't sticks in the mud just because they want to keep playing normal EDH. Plus, as stated before, not all Un-cards are fun for all players. Some may even be deeply un-fun. For example: I know I'm not the only one out there who isn't comfortable with the thought of someone shooting at my cards with tiny foam darts. I own one very precious Crucible of Worlds, and if it winds up on the floor, I won't exactly be pleased. (For readers doubting whether a Nerf Blaster can knock cards to the floor, this is actual playtest footage while Wizards was creating the Nerf War card.) Crucible of Worlds might be my pride and joy, but there are thousands of players out there with foils and Expeditions and Gaea's Cradles far more valuable than my Crucible, and I imagine they share my same discomfort.

Concerns have also been raised about the aforementioned Mirror Mirror, which exchanges libraries and hands with another player. For players with very expensive cards in their decks—or just very expensive decks in general—letting other players handle those cards is literally a financial concern. Not all players shuffle delicately. Some flick their cards, or bend them in their hand without even noticing. This is a format where people like to play foils, and a game where any given crease, nick, or bend can reduce a card's value anywhere from $1-$100. If a player with a high-roller deck can't trust that his or her opponent will treat their cards with care, they'd sooner just concede. This probably sounds like exaggeration to some, but many of us have had opponents that bend a card through the mere act of picking it up to read it.

I'd also like to mention that not all players are lucky enough to have normal playgroups. While many of us can opt into a house rule to allow or disallow silver-bordered cards, players without a regular group must rely upon strangers they encounter in their local game stores. Their ability to play a normal game of EDH may become limited within this six-week span.

This is a two-way street, of course. Just as players who dislike this announcement ask that their concerns be addressed fairly and seriously, those players should also be aware of how downright excited other players are. Frankie Peanuts is a riot. Cheatyface is genius. The only problem with Crow Storm is that I don't own one yet. One of my buddies is practically bursting with glee at the prospect of a Baron Von Count deck. That unrestrained love for the game should be Cultivated, not Flattened. 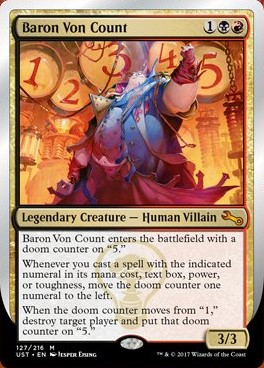 The long-standing narrative of the Commander format has become the conflict between competitive and casual. Casual players want a fun time with friendly folks, competitive players want to be challenged so they can improve and grow. These goals don't match up well in gameplay, which can cause both groups to resent the other, and to talk past each other rather than with each other. A piece of me does worry that since this announcement is geared more towards casual players than competitive ones, it may become another crack in that divide.

However, for those competitive players, I'd just like to point out that the Rules Committee clearly does still agree with you; they like regular Magic too, which is why this rules change is temporary. It's not forever, it's just something silly for the holidays. We'll be back to our regularly-scheduled EDH before long. In the meantime, some of us could use a good reminder to stop tuning our decks and instead just bask in the glory of Knight of the Hokey Pokey.

What are your feelings about this un-nouncement? Is Un fun, or unfun? Are you unimpressed? Unconvinced? Do you find this change to be unjustifiably unnecessary and unbearably unpleasant, or are you understandably undisturbed by this unexplored new universe? Let us know your opini-un!