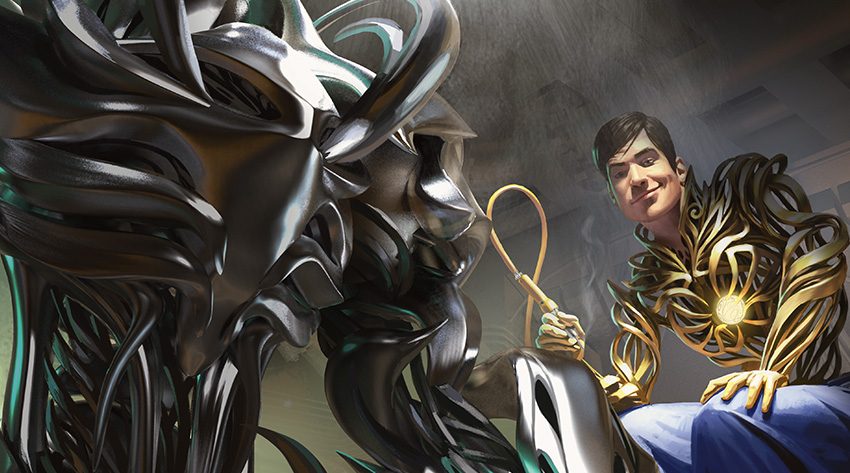 Silas Renn, Seeker Adept combines the sneering punchable face of Martin Shkreli with the haughty annoyance of C3P0’s body. He’s a fun guy at parties. But enough about the card art. He’s a 2/2 with Deathtouch. If he does combat damage to a player, you can cast a dead artifact from your graveyard. You still have to pay the mana to cast it and you most likely have to do it in your second main phase.

What color to add?

Most artifacts themselves are colorless, so that in itself does not give us much direction in deciding what color(s) to add to a Silas deck.

Looking at Silas Renn’s Signature Cards, 36% are adding red with the Great Furnace artifact land. 34% are adding white with Ancient Den. Scrolling down to the Lands section, Arcane Sanctum and Crumbling Necropolis are about even with 35% and 32% inclusion respectively.

We have to scroll down to the bottom of the Creatures section before we see any green with Winding Constrictor at 12%. Adding an Advanced Filter with Winding Constrictor, there are a lot of cards in those results that care about +1/+1 counters. Reyhan, Last of the Abzan could use a recursion approach with the Modular keyword on the various Arcbound artifact creatures such as Arcbound Ravager.

It looks like 24% are adding both white and red with Mystic Monastery and Nomad Outpost for the full Breya, Etherium Shaper package. Akiri, Line-Slinger adds both colors and is the only other Partner that has the word “artifact” in the text. While they could make a good team, from a strategic standpoint Akiri would probably be in the lead position. I’ll revisit that pairing when I write an Akiri article.

Let’s see if the planeswalkers can provide some color guidance. Searching Gatherer for type: Planeswalker and text: artifact gives us the following:

All of the versions of Tezzeret can go with Silas Renn without any color additions. Pick your favorite.

Daretti, Scrap Savant has a strong focus on artifact graveyard recursion. If you already have a Daretti deck and want to restructure it to add more colors beyond mono red, Silas Renn is a good start. Dack Fayden, Elspeth, Knight-Errant, and Freyalise, Llanowar’s Fury care more about your opponents’ artifacts than your own. If we want to focus on enter-the-battlefield or doubling shenanigans, Saheeli Rai and Daretti, Ingenious Iconoclast can make token copies of things. Nahiri, the Harbinger helps you discard recursion targets into your graveyard while Nahiri, the Lithomancer adds Equipment-specific abilities.

Another Gatherer search for type: Legendary Artifact Creature gives us these commanders:

If we like control decks, Memnarch can get us started with a good list of artifacts. That still doesn’t expand our colors though. Reaper King on the other hand can lead to artifact synergy in any color if we can filter out the Scarecrow (and Shapeshifter) tribal elements. Scarecrone, for example, is not a bad recursion card even if we ignore the first Scarecrow-related ability.

A Gatherer search for type: AND Legendary Creature NOT Artifact, text: artifact gives us 37 results.

Some highlights include Arcum Dagsson, Feldon of the Third Path, Glissa, the Traitor, and Hanna, Ship’s Navigator. All of these either put artifacts in your graveyard or take them back out again. Muzzio, Visionary Architect and Padeem, Consul of Innovation go well with any deck that expects to have the biggest artifact on the board.

In red, Kurkesh, Onakke Ancient could pull some doubling tricks. Pia and Kiran Nalaar or just Pia Nalaar add some minor artifact-related effects with free thopters. Mishra, Artificer Prodigy may seem at first glance like it’s not a good commander for a singleton format, but there are some specific shenanigans for him that are outside the scope of this article. Shattergang Brothers gives me a fleeting idea for a sacrifice deck that clears the board by killing off saprolings from Tana, the Bloodsower, but that seems over-complicated and may draw more table hate than that deck can handle.

Sydri, Galvanic Genius, the Hermione Granger from a steampunk alternate universe, is a strong commander for artifact-heavy decks. Along with Sharuum the Hegemon and to a lesser extent Sen Triplets, the blue/black/white combination already has strong artifact synergy. Since I’ve written three articles in a row that use red, I will arbitrarily choose not to use red this time.

Searching Gatherer for text: partner with color: AND white NOT red gives the following options:

Sidar Kondo can make Silas less blockable to enable his combat damage ability. If you want to see an example of how Salvaging Station, Blasting Station, and Flayer Husk work together, check out the Command Zone videos of Jimmy Wong’s Silas/Sidar deck here and here. Of these, Ravos seems the strongest partner since he adds more of the graveyard recursion that Silas was already planning on using. This brew is going to look a lot like a Sharuum the Hegemon build. There will be flying Sphinges and Thopters galore. How often do you get to play Ethersworn Adjudicator? There are plenty of mean tricks like Magister Sphinx, Duplicant, and Mindslaver that get even better when you can recur them again and again.

There are some low cost self-destructing artifacts with “Capsule” or “Spellbomb” in their name (e.g. Executioner’s Capsule, Nihil Spellbomb) that Silas can reuse cheaply, especially with a Salvaging Station in play.

To add focus, I removed any creature that is not also itself an artifact (sorry, Sydri). Darksteel Forge or Soul of New Phyrexia lets us be a bit more free in our boardwipes, but Scourglass becomes more beneficially one-sided in this deck than something like Nevinyrral’s Disk.

Even within Esper artifacts, there are plenty of directions to explore. Here’s my list…

Next time: Sidar Kondo of Jamuraa