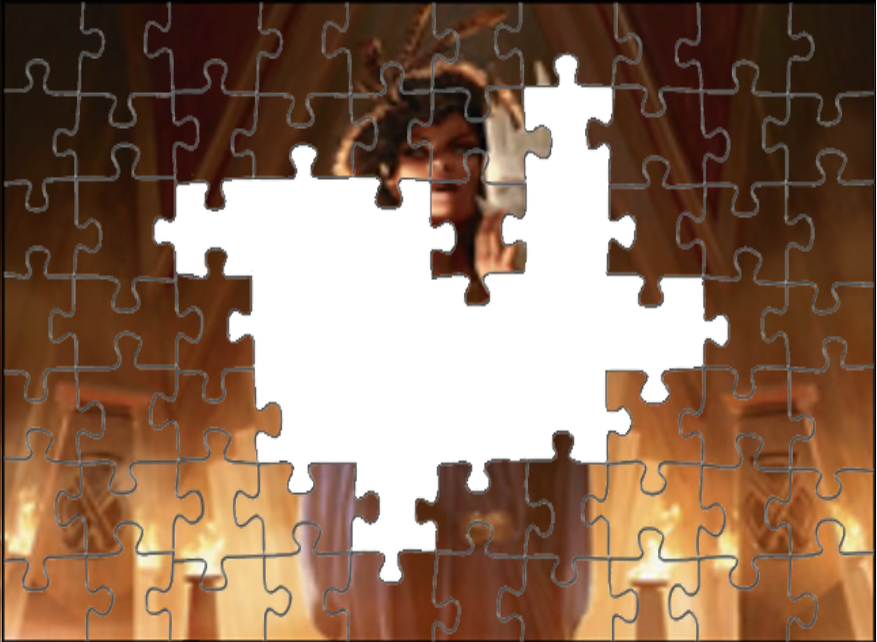 In case you missed the last article, welcome to Pieces of the Puzzle! I’m your host, Goldshot, a Head Editor on the Commander Spellbook project and still trying to think of some fancy way to start these articles. Pieces of the Puzzle is a series that takes a look into combo decks, both how they function, and how they are made. My overarching goal with this series is to look at each new set and showcase a bit of what they do for combo players or interested individuals. Following up on last time when I covered Tameshi, Reality Architect, I'm going to cover a commander from the new set, Streets of New Capenna: Cormela, Glamour Thief.

Cormela, Glamour Thief is an uncommon legendary creature that seems strongly intended for the new Maestros mechanic, Casualty. Casualty allows you to sacrifice a creature with power equal to or greater than the Casualty number when casting the spell with Casualty to get a copy of the spell. As a result, Cormela, Glamour Thief's first two lines of text are built to allow us to cast our multicolored spells, while her third ability is meant to allow her to be sacrificed to a spell to get back a different one.

This results in a commander who was meant for the Limited space and can now be used in weird and interesting ways as a commander. Luckily, weird and interesting is just what I was looking for. Cormela, Glamour Thief is a spellslinger commander, similar to Kess, Dissident Mage or the new Anhelo, the Painter, but at the same time is completely different. While Kess, Dissident Mage gives you one spell recast every turn, Cormela, Glamour Thief will give you one spell once when she dies. Anhelo, the Painter may also be a Vampire who loves slinging spells, but while he wants to sacrifice other creatures, Cormela, Glamour Thief wants to be sacrificed instead, so despite their shared love of throwing spells, those two might not be the best comparison. Rather, I think we can find a bit more common ground with a certain Simic legend: Arixmethes, Slumbering Isle.

Why Arixmethes, Slumbering Isle? Mainly because of the last ability. Arixmethes, Slumbering Isle can tap to add GU, similar to how Cormela, Glamour Thief can pay 1 and tap to make UBR that can only be spent to cast instant and sorcery spells. Now, I know this sounds like a stretch, but I can improve the comparison even more. When looking at EDHREC's top combos for Arixmethes we can see two very interesting combos at the top:

These combos can give us a perspective on a different way to combo with a commander. Because Arixmethes, Slumbering Isle needs to wait a while before we can enchant it with Freed from the Real or Pemmin's Aura, it instead acts as a powerful ramp engine, costing 4 mana and being able to add two mana until we can combo. Sound familiar? Cormela, Glamour Thief also costs 4 and can add two total mana. We can then apply a lesson from the Arixmethes, Slumbering Isle decks. We can play Cormela, Glamour Thief, take advantage of the powerful ramp engine, and then combo off when the time is right.

Unfortunately, we can't take all our lessons from Arixmethes. Freed from the Real and Pemmin's Aura don't combo with Cormela, Glamour Thief because of that pesky instants and sorceries clause, so we'll need to look elsewhere. Maybe by starting with Cormela, Glamour Thief combos, we can work backward to find other combos that fit right for the deck, so we will instead look at...

Time to start our hunt again. When looking at Cormela, Glamour Thief, the second ability seems like something that can definitely feed a combo, but not necessarily make a good base for our combo. Rather, I think the key lies in our last ability. Cormela, Glamour Thief can grab us spells from our graveyard. Unlike Kess, Dissident Mage, when we cast the spell, it goes right back into our graveyard. There's one last issue, though: Cormela, Glamour Thief is a creature card. That means that when she dies, she's either going to go to our command zone or sit in the graveyard and question why we've abandoned our commander. The first option doesn't seem great, costing 2 more whenever we want to cast her, but the second option we can definitely work with. We can quickly pull her out of our graveyard to get rid of the guilt using the power of reanimation! Inject a bit of battlefield into that creature in the graveyard, and it's on the battlefield! Spells like Corpse Dance, Footsteps of the Goryo, or Demonic Gifts can quickly yoink our commander back onto the field, making it as though we never decided to put our commander in the graveyard. 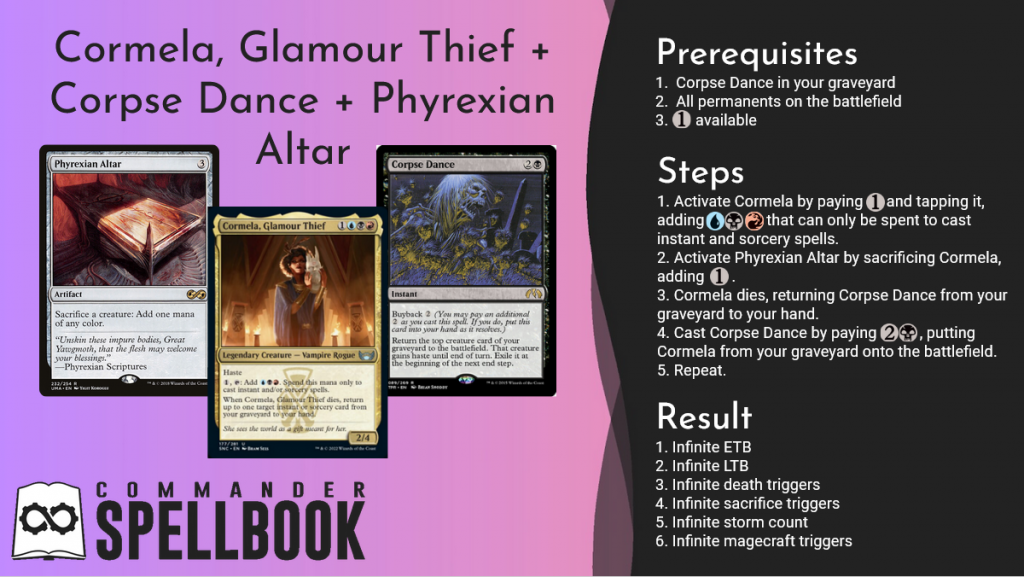 Now we have some cards to work with. Using Commander Spellbook’s search engine, we can quickly find combos that use the same pieces and have a desired outcome. Searching for the earlier combo pieces, we can find some combos I think are a great match for the deck:

The combos synergize well with our aristocrats/spellslingers build and allow us a spare option if we lose our commander.

Once we have our infinite results, it's time to close out the game. One such way is with infinite mana, a classic, and some cards that were mentioned earlier that can net us the one extra mana to combo off can be stacked up; using two of them immediately gives us infinite mana.

Once we have our infinite mana, we need something to do with it. This is where our outlets come in. Big X spells, like Fireball, Pull from Tomorrow, or Blue Sun's Zenith, can give a quick outlet for all that abundance of mana, allowing us to either draw our way to Fireball, or have our opponents draw their entire library. Luckily, we have a ton of infinite results to work with. Cards like Blood Artist can allow us to make use of the infinite death triggers, closing out the game while also giving us a dampener for other aristocrats decks... Sorry, Lurrus ):

At this point, we're a Grixis spellsinger deck with a combo finisher, so the rest of the deck should reflect that. Cards like Impulse, Archmage Emeritus, and Frantic Search can keep us churning through our deck, looking for our combo pieces. Retreat to Coralhelm can return to make me suffer yet again, while also being really cool with Cormela. Being that we're playing spellslingers deck, we can support a bunch of board wipes because we run fewer creatures than everyone else, so Decree of Pain, Deadly Tempest, and Hostile Takeover can fill that role nicely.

Hopefully you guys enjoyed this journey of a deck as much as I enjoy talking about Lurrus! Without any further ado: