Pure//Simple — What's Yours is Mine 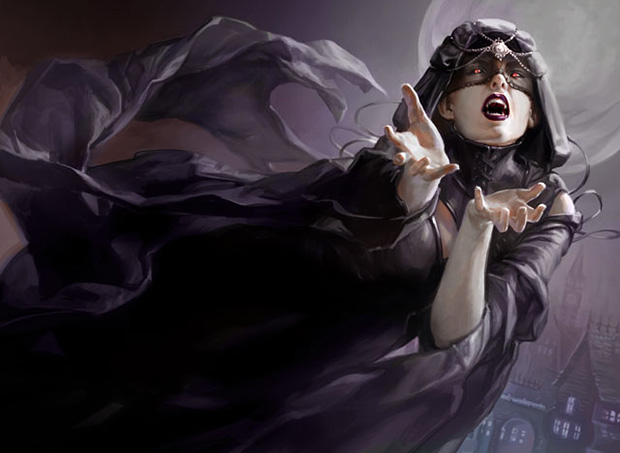 Welcome back to Pure//Simple, the article series that tries to take the mystery out of card choices. Knowing what cards are good in Commander is one of the first steps towards becoming well-versed in the format, but knowing why certain cards are good is even more important.

Last time, I showcased two ways of building with one card, Panharmonicon. One of the commanders I chose for that article was Gonti, Lord of Luxury, which works with Panharmonicon in a way that’s similar to drawing cards. However, another great thing about Gonti is that the card lets you use your opponents' decks against them. So I thought I’d talk a bit about other cards that have a similar effect.

Now, you might be wondering, “Why take other people’s stuff? Can’t you just play good cards on your own?” Well, of course you can. However, there is one distinct advantage that playing with other peoples' cards has over your own – your deck’s power level scales with your opponents' decks. This is important in a multiplayer format like Commander, because becoming too powerful early in the game can force the other players to band together to take you down. It’s not always the best position to achieve because often, even with your powerful start, you might not be able to keep 3+ players at bay for long. However, if you’re copying and taking things that other people have, it’s hard for them to argue that you’re overpowering them, since they’re the ones who put those cards in the game.

One thing to keep in mind when going for a “What’s Yours is Mine” strategy is the demeanor that some players may affect to that line of play. There are essentially three ways of playing the cards from other player’s decks, and each way has its own reaction.

One way to use your opponents' decks against them is to outright take what they already have. Do you like that creature they have on the battlefield? Bring it over to your side. Maybe you want their planeswalker or artifact instead? Well, you can do that too. One thing to be careful with is the political aspect of stealing something from an opponent. They put that card in their deck probably because they like it, or at least because it’s good in their build. Then, they probably spent a turn and most of their mana to get that card on the board. And now you come along and just take it away from them. People remember that much more than if you were to outright destroy the permanent, mainly because you’re using it to your advantage now.

If you’re willing to risk the ire of other players, try these two cards: It’s always fun when the card’s name matches exactly what it does. Blatant Thievery is the kind of card that can seem innocuous, if only because of its high mana cost, but there are times when this card can lock up the game for you. Seven mana may seem a steep price to pay to get 2 or 3 permanents, but usually the total converted mana cost of the cards you are taking from your opponents is much, much more than seven. Even if it isn’t, that means that you were probably taking something that was going to allow an opponent to win. The main drawback with a card like this is that you might end up having the entirety of the table looking your way afterwards. The upcoming big baddie of Amonkhet is already a big baddie in Commander. This planeswalker’s -2 ability gives you the best creature on the board, and you can do it again next turn, should the dragon stick around. Oh yeah, did I mention that you can nuke a non-creature if you don’t feel like taking something? This color combination has problems with enchantments, but good (or should I say bad?) ole Bolas is there to deal with those. Not to mention that his last ability can ruin someone’s day. All of this in one neat package.

You don’t have to outright steal your opponent’s cards in the game to use their deck against them. In fact, you can get their best cards before they do. This has the added benefit of making sure your opponent can’t win the game with that card, should it be a key to their victory. Beyond that, it’s less of a political risk to use cards in this category than outright stealing cards, mainly because the opponent didn’t invest anything in the game before you came in and took it. The de-facto line of play with Praetor's Grasp is to get the best card from an opponent out of the game, but it doesn’t stop there. You can just as easily use it as a semi-Demonic Tutor, if you know or can guess what cards are in your opponents’ decks. With the removal of Rule 4 in Commander last year, which restricted the color or colors of mana you could produce to your commander’s color identity, Praetor's Grasp got better because you’re no longer forced to find cards in your colors if you want to cast it later. You can play City of Brass, and similar lands, to produce the color you need. In a similar vein to Praetor's Grasp, Thada Adel, Acquisitor can get you a lot of great stuff from your opponents. Of course, she has more requirements than Praetor's Grasp, seeing as how you have to deal combat damage with her before you can even get the card, but she is repeatable. And most of the time, you will find something, even if that is just a Sol Ring, it may be enough to put you ahead of everyone in the game.

The last way to play cards from your opponent’s deck is to copy what they are doing. This is the least likely to get you in trouble politically in a game since you’re not stopping your opponent from having theirs too. All you are doing is getting in on the action yourself. There many cards that copy spells in red, and Dualcaster Mage is one of the best simply because it is also a creature. Being a creature means that it can attack, block and most importantly, it is really easy to get back to your hand from your graveyard or the battlefield. Having a card like Erratic Portal means that you can copy most of the spells you want simply be returning the Dualcaster Mage back to your hand over and over again. Clever Impersonator is the probably the best evolution of an ability that blue has had since the creation of the game – copying creatures. Not only does the Impersonator do a great job at being a Clone, it also can be a planeswalker, or an artifact, or an enchantment. Essentially, it can always be the best card on the board, unless that card is a land, which is highly unlikely outside of a few examples. I call it the “Swiss Army Clone”.

Putting it all together.

It’s no coincidence that all the cards are in the Grixis colors (blue, black and red). They are the three colors most likely to use their opponent’s cards against them. So say we wanted to build and entire Commander deck around this theme, who to pick? Here’s my suggestion: Jeleva is the only legendary creature in Grixis that directly uses your opponents' cards against them, since you can steal instants and sorceries just by attacking. Of course, this includes your own. Casting your own spells for free seems to be what most people do with Jeleva, according to EDHREC’s stats. But have no fear, we can use EDHREC’s awesome advanced filter to narrow down the decks to find ones that fit our theme. My suggestions here are Clever Impersonator and/or Praetor’s Grasp, since they aren’t normally played, based on EDHREC, in the instant and sorcery themed deck.

There are many paths to deck building and this time I showed how you can start from a theme and work your way up to a Commander. As I have said before, there is more than one way to build a deck.