Welcome back to another installment of Reconstruct History, where we look at popularity trends over time for cards and archetypes here at EDHREC!

This week, we're delving into two wonky, wild, mono-black enchantments that give tokens to our opponents: Tombstone Stairwell and Infernal Genesis.

Similar to our installment a few weeks back on Outpost Siege and how its popularity may have been affected by the printing of Prosper, Tome-Bound, I wanted to take a look at these two cards in relation to the release of the salt-inducing (yet ironically salt-averse) Toxrill, the Corrosive.

Spoiled in late October 2021, this card generated a lot of chatter on sub-Reddits, Twitter threads, and videos alike. Proponents of Toxrill (full disclosure: myself included) were intrigued for a number of reasons, which I'll try and summarize in my own terms here:

It's that last point that inspired our installment today, as not many control decks (nor tribal decks for that matter) typically want to actively give creatures to opponents. How often do you see tribal control decks running Akroan Horse, Dowsing Dagger, or even Lifeline just to generate... Slugs?

Both Tombstone Stairwell and Infernal Genesis provide a semi-consistent means of giving opponents small tokens, which at the end step will trigger Toxrill, the Corrosive to put slime counters on them. Barring an anthem effect, this will just kill all the 1/1 Minion creature tokens made from Infernal Genesis, effectively giving you as many Slug tokens as the mana value of cards flipped from the top of your opponents' libraries.

For Tombstone Stairwell, it turns out old cards weren't written so clearly; its 'Oracle' text actually states that the Zombie tokens get destroyed at the beginning of each player's end step. While they are 2/2s, and therefore won't die from Toxrill's slime counters directly, Toxrill only cares that they were destroyed and that they had slime counters on them, thus giving you more Slugs. With both Tombstone Stairwell and Toxrill in play, you effectively make X Slug tokens each end step, where X is the total number of creature cards in all enemy graveyards. In one turn of the table, you'll get more Slugs than you can count. That's bonkers.

Had Toxrill, the Corrosive not made the splash it did, I wouldn't have looked into these two cards, but Toxrill has exceeded expectations, racing far above a snail's pace to the top position out of all the Innistrad: Crimson Vow legendary creature options from the set. It's a distant lead, too; there are some 3,000 decks between it and Runo Stromkirk in second place. As such, Toxrill's page is oozing with information, and has left quite the data trail for us to follow popularity of odd cards such as these.

Let’s start by outlining some criteria:

There are a lot of other similar cards that could work here - think members of the 'Hunted' cycle like Hunted Horror or Hunted Phantasm, or perhaps think of Genesis Chamber, Slaughter Specialist, and Clackbridge Troll.

While these are all viable considerations in a Toxrill deck, I wanted to see how Toxrill may have specifically affected older, wonkier enchantments like the two above rather than a general suite of all cards.

Plots for both Infernal Genesis and Tombstone Stairwell can be seen below in the carousel. Feel free to scroll through to see either card. Additionally, I included a more zoomed-in version of these plots, manipulating the Y-axis so the changes in rank don't get so smoothed out by the larger Y-axis.

This is pretty interesting to see, as there's an incredible amount of up-and-down seen in both of these cards.

That's a ton. The average rank change for both held pretty steady leading up to Toxrill, the Corrosive being spoiled: 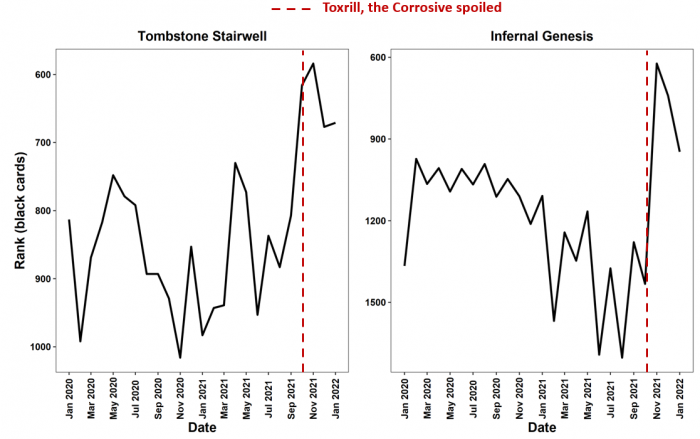 Sure enough: we see the biggest upswings in rank corresponding directly to the spoiling of the Slug itself.

With all that out of the way, let's take some Time to Reflect!


Let's start with Tombstone Stairwell, which, like a lot of Reserved List cards (cards that Wizards of the Coast has claimed they won't ever reprint), has followed a pretty unidirectional trend upwards in the last few years.

We see one significant uptick from $11.08 (Oct. 30, 2020) to $21.50 (Nov. 1, 2020), likely corresponding with Commander Legends and the release of Thalisse, Reverent Medium, another powerhouse with Tombstone Stairwell. However, the largest surge in price clearly dovetails with Toxrill, the Corrosive's preview/release in September 2021, soaring past $25 in many cases, but seems to be steadying now that some of the hype has diminished.

As for Infernal Genesis, talk about a diamond in the rough. It was the Weekly Winner back in December 2021, going from bulk rare (~$0.50) to bananas prices ($10) overnight. In an age where mana values seem to be getting leaner and six-drops aren't as prevalent, it was intriguing to see how much hype it got both price-wise and popularity-wise. It does curve into Toxrill quite well, but as of now, it's only made it into 25% of Toxrill decks, so I'm curious to see where this price holds long-term.

We've already highlighted the unique utility of these cards, and how they relate to the controlling shell of most Toxrill decks, but where else might we make use of them?

Check out Tombstone Stairwell's page or Infernal Genesis's page and you'll find some sweet homes for them, like Syr Konrad, the Grim, Grismold, the Dreadsower, and Thalisse, Reverent Medium.

Our very own EDHRECast host Joey Schultz is a huge Syr Konrad, the Grim fan, and has spoken multiple times on how crazy good Tombstone Stairwell is with Konrad's ability. If Tombstone Stairwell sticks around while Syr Konrad is in play, it's likely just certain death for all opponents. It deals 4X damage to each opponent every round, where X is the number of creature cards in all graveyards. It's not just a 'spicy' inclusion, it's 2,200,000 Scoville Units of Carolina Reaper, which, practically speaking, is death. Currently, the Stairwell only finds its way into less than 10% of Konrad decks. Infernal Genesis only makes it into 11 total Konrad decks, and I personally think this card is underplayed for Konrad, considering it also mills cards on each player's turn, which could potentially cause more creature cards to hit the graveyard and thus trigger Konrad!

Finally, Tombstone Stairwell seems pretty darn good with Thalisse, Reverent Medium. Would you like an army of flying Spirit tokens in just one turn rotation? Why yes, please!

There are some less-obvious budget commanders that also work well with these cards. Kardur, Doomscourge loves the fact that the Tombstone Zombie tokens have haste, since it means they can swing at opponents with Kardur's pseudo-Goad ability and will likely die in combat, to boot! Sengir, the Dark Baron gets real swole when all those tokens die, and Sarulf, Realm Eater will gladly chow down on all those Zombie and Minion tokens!

Normally, I don't do deck techs in this series, but this seems a special occasion, since these cards are so unique to the Commander format.

A few years back, my brother and I joked about one day going to a MagicFest Commander event and show up to the same table, both with Shattergang Brothers decks to play in the same pod. The idea was that his would be built as a Stax deck, emphasizing resource denial (e.g., Tainted Aether, Burning Sands), and mine would be a Group Hug deck, giving away resources (e.g., Sylvan Offering) that would subsequently need to be sacrificed.

It was a total gimmick idea, but the release of Rampaging Ferocidon (Ixalan, 2017) and later Varchild, Betrayer of Kjeldor and Grismold, the Dreadsower (Commander 2019) actually got us thinking about it more seriously, to the point where we actually just jammed the two strategies into one list and called it 'Gift-stocrats.' Kresh the Bloodbraided led this deck for a little while, but people astutely pointed out the nonbo of Kresh and -X/-X effects, where he won't get any counters when those creatures' power totals were shrunken down. We therefore switched it back to Shattergang Bros. for flavor purposes.

Both Infernal Genesis and Tombstone Stairwell seemed particularly fun here to foster an all-out mass casualties deck. The idea is the same: give away creature tokens, and punish opponents when they die (Burning Sands, Earthlink, Grismold, the Dreadsower), or punish our opponents when those creatures come into play in the first place (e.g., Tainted Aether, Rampaging Ferocidon). It's one of the few times that Primal Vigor working for opponents is a good thing!

Obviously, it's still very much a gimmicky deck, definitely trying to do too many things in one shell, and in the wrong pod, it can make for a very sour experience. Even so, it's honestly been a fun experience to theory-craft as WotC releases more cards like Grismold and Syr Konrad. Additionally, it's been really fun co-brew a list, rather than brewing something solo and getting feedback later.

My brother and I both got our copies of Tainted Aether around the same time during the holidays last year, and it's not often you get to say, "Nothing brings family closer together than the holidays... and land destruction."

Wherever you may fall on the topic of Toxrill, the Corrosive or Shattergang Brothers, I hope you agree with me that both Tombstone Stairwell and Infernal Genesis feel distinctly like Commander cards, despite being printed more than 20 years ago when the format wasn't even a thing. They actively give creatures to opponents, which can be used against them or used politically, and they scale to the multiplayer nature of the game in some fascinating ways.

What do you think? What's your take on these cards, or some of the neat homes for them? Have you ever co-brewed a gimmick deck, and if so, what was it?