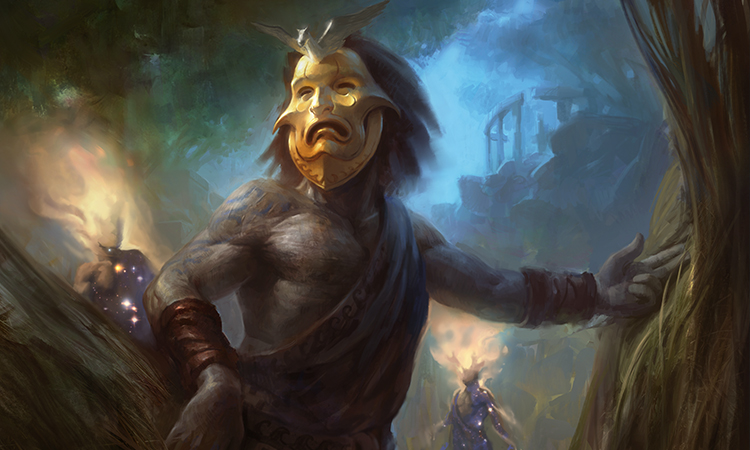 This article is part 6 of a 10 part series covering the Singleton Guild Wheel Project, a 10 deck project where there is only a single copy of any non-basic land among the 10 decks. Each deck uses the color combination of a different Ravnican guild. The methodology is introduced here and expanded upon each week by featuring a deck formed using part of the Wheel. Since the deck building process is iterative, expect featured decks to change in between articles. For the complete introduction to the project, see our first article here.

But seriously, this deck is already fun enough, we don't need WotC crashing the party. This week we get super spooky with Daxos the Returned and the black/white Orzhov guild! Granted, Halloween would be a more fitting season for this deck, but instead it's tax season so we made sure to feature plenty of taxing items this time around. What could that mean? Keep reading and find out!

Trick or treat, smell my feet, give me a good decklist to read!

At first glance on Daxos' EDHREC page we find that apparently everyone just crams these decks every single card that has both creature and enchantment card types. Seriously. Look at the page if you don't believe me. (Seriously, why wouldn't you believe me? I've never led you astray before.) After the first few of the top-played creatures (Treasury Thrull?!?) we venture very deep into Theros block.deck with all of the enchantment creatures. Now I understand that themes are important, along with maximizing your experience counter triggers, but at what cost to your power level? Plus, these guys are just spooky. Kids would be so frightened. These guys hang out together in the basement!

This isn't to say that we don't play ANY enchantment creatures, but the Bestow and Constellation keywords just don't do enough for us. So later we'll add some combos to up the deck's stopping power.

We also drop out some of the "tempo" plays that seem to be popular in the deck. Cards like Authority of the Consuls and Blind Obedience tickle my Modern player fancy, having played in the Splinter Twin era, but I never understood why these types of cards got played. Unless you play against lots of aggro players in your playgroups I think you can leave the "creatures enter the battlefield tapped," plays at home. Now we can talk about the folks that are going to stick around after we clean house. It's incredible to see why Black Market is played at a 62% clip in Daxos decks. White and black don't neccessarily ramp very well on their own. Sure, we can play our signature signet/keyrune/cluestone cycle, but only three sources of getting ahead don't really make it "good". The same can be said for Underworld Connections since we're not playing a ton of tutors or extra card draw, it can slide in to fill a need and make our Daxos benefit as well.

Moving away from the low payoff enchantment-themed cards lets us work with some real payoff cards. Sigil of the Empty Throne certainly fits the bill, since we're going to be casting a fair amount of enchantments, it never hurts to get a little extra, as they say. 87% of Daxos players seem to like that extra, making it THE signature card according to EDHREC's stats.

Since we're playing a fairly low count of card draw and are vulnerable to getting our stuff blown up, we need a way to recur our heavy hitters. Silent Sentinel is one of those cards that is evasive enough to not worry about it dying to get a trigger and is also big enough that you probably won't need to worry about it getting blocked and dying. This deck can occasionally get wrecked by being too fair and having to deal with discard effects so being able to cheat stuff back into play becomes a big deal. This is the same reason Empty the Vaults is such a sweet card for us as well. It's a pretty cool feeling when you can just pick up your graveyard and plop it onto the battlefield like you run the place. These might be highly played in the Daxos deck from "the precon effect," that some EDH writers allude to (where a card is played at a higher clip that others because it is included in the commander's pre-constructed deck), but I'm fine with Silent Sentinel sticking around.

This odd prison/enchantment deck may take a while to get up and running, but once we do we get to play some nutty win-now combos. I'll just lay them out for everyone and let them digest first.

"Oh no! Why am I drinking this glowing liquid!?"

Old reliable as some would say

Yea, you read that last one right. Lich combined with Repay in Kind for ALL the "Let me read that card again," shenanigans. What happens is you play Lich and your life total becomes zero along with all the other conditions of the card. But the important part is that you have no life. Then we play Repay in Kind which makes everyone else's life total match yours, since you have zero life which SHOULD be the lowest. If not, something went wrong somewhere along the way. In the end if you happen to resolve your Repay in Kind with Lich out it becomes an instant win for you since nobody else at the table(presumably) has a card that lets them not lose at zero life. Just be ready to get this look shot your way a couple times... Isn't Magic fun!? Now that we've got that out of the way, we also run a couple other two-card combos that we can fire off. Beacon of Immortality with a Tainted Remedy lets us pick off opponents one by eventually one. Since they don't gain the life from the beacon they just lose the game on the spot. Unless they're playing Lich themselves which just might make them crazier than you.

Naturally we have the Sanguine Bond/Exquisite Blood combo since we may as well just quit trying to be creative. When you're playing such a fragile and wonky combo with a card like Lich you earn yourself some time to kick back and relax. Finishing out the deck and complimenting our two-card combo lineup we use the SUPER fun prison lineup that graces some tabletops every now and then. Sphere of Safety just happens to be a no-brainer along with it's pal Ghostly Prison. Koskun Falls comes out of my favorite set growing up of Homelands (I told you I was a bad casual growing up) to create another prison effect so long as we have a creature to feed to it every turn. Considering we have extra cards that make lots of tokens like Heliod, God of the Sun, Westvale Abbey, and Opalescence making all of our enchantments into creatures on occasion, we never really have to worry a great deal about keeping it online. It all feeds into building up that pillowy fort of goodness while we wait to pounce with one of our huge and admittedly derpy combos.

And without further adieu, the decklist du jour!

And there we have it guys! My super spooky Halloween in March special spooktacular. Apathy included. If I missed any quality cards please let me know in the comments or on any of my social media below. I'm always in the Black Market for some upgrades. Thanks again!