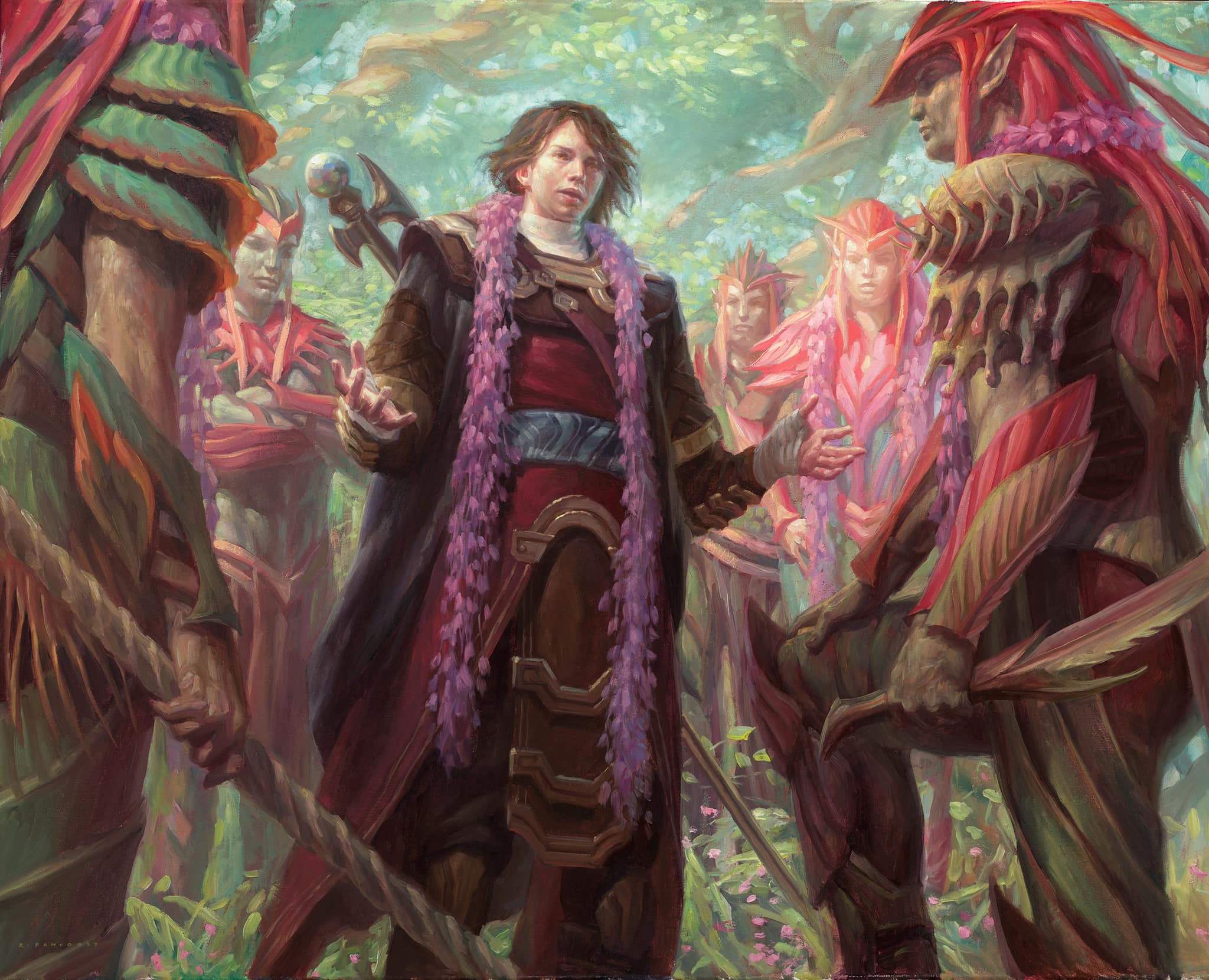 Commander may use the same cards as other formats, but if you want to succeed you have to throw some of the tried-and-true Magic: the Gathering lessons you've learned out the window. For example, the Modern format has decks, such as Jund, that are predicated on trading cards one-for-one to generate advantage. That doesn't work in Commander.

This format is about finding a balance between mana efficiency and sequencing. Using your mana effectively is important, but that doesn't mean firing off a removal spell just because you can. I have stressed the mathematical differences of a multiplayer game before as well as taking a look at how to use your interaction, so by now I hope you see the importance of finding this balance.

Let's take a look at some strategies to apply in deckbuilding as well as in-game to strike this balance.

What is Mana Efficiency?

Mana efficiency refers to how much of your mana that you use each turn. For example, if I cast a Rampant Growth on turn three and pass the turn, then I only used ⅔ of my potential mana. We want to build our decks in a way that allows us to maximize the odds that we can spend all our mana on each turn. How can we do that?

A strong mana curve is the first key to building a strong deck. Reject the urge to keep a hand just because it has a strong mid-game/game-winning card. Envision your first three turns, and if you don't have a play, you shouldn't keep the hand. This realization was one of the biggest level-up moments in my Magic: the Gathering career. It may not be evident by the end of the game, but many games are lost because of a bad keep without the player even realizing it. You have a free mulligan, and you should use it!

With that out of the way, how do we maximize our chances of drawing a good opening seven?

Our commander automatically fills a slot on our curve. Not all players build around their commander, but if you do and you plan to play on curve, then you should consider this within your mana curve.

Okay, it's time to get controversial and disagree with a bunch of you out there. Cultivate is a powerful card, but you might be overplaying it. Cultivate sees play in 49% of eligible decks that contain green. However, when we look at the top 25 commanders that contain green of the past 2 years, we see that 15/20 fall within the range of costing three to four mana. This means that if we want to play Cultivate on turn three, then we're unable to play our commander on curve, and if we play it the following turn, we'll have excess mana that goes to waste. Conversely, if we cast our commander on curve, then, outside of a Landfall deck, that Cultivate becomes a much less exciting option.

Your ramp should be tailored to your strategy. Don't just turn to the most popular options if you want your deck to flow. If Three Visits and Nature's Lore are outside of your budget, then consider alternatives such as Edge of Autumn or Into the North, especially if you have some basics or snow duals from Kaldheim lying around. If you want to cast your three-mana commander on time, consider Wild Growth, and don't forget the power of mana dorks like Fyndhorn Elves or Llanowar Elves. Even if the ramp spell is not as powerful in a vacuum, you'll notice your deck become stronger if the spell allows you to play on curve.

Unfortunately for budget players, it is true that a fetch land and shock land mana base is the easiest way to ensure you play on curve. The advantage grows with each turn as the gap in potential mana returns gets wider and wider. It effectively puts the player a full turn ahead.

How can we mitigate this? The un-fun answer is to play fewer colors. Mono-colored decks can easily keep pace in potential mana returns by avoiding tap lands all together and running more basics. The downside? You give up the flexibility of relying on the strength of other colors. The upsides? More budget options, keep up on open mana, and easier to include utility lands such as War Room and other utility lands that are mana sinks that can ensure you stay mana-efficient even as the game drags on.

If you are playing multiple colors, there are some options for you as well. Most importantly, don't neglect dual-colored lands altogether. It may be tempting to rely on more basics, but if you're playing three or more colors, you'll get burned more times than not. Look out for the Commander deck releases with each set! These often include solid budget dual lands, such as Prairie Stream and Sunken Hollow. These releases push down their prices and give options to include lands with the potential to come in untapped.

These lands and many others are just great because we can find them with some of our ramp spells, such as Farseek or Nature's Lore. Your mana base is a good place to invest whether you're a budget player or a high-roller. If you buy these cards when they're reprinted then they're likely to maintain their value with the potential to rise. No matter what lands you're playing, sequencing goes hand-in-hand with mana efficiency.

Sequencing is the order in which you play out the cards in your hand and take your game actions. All variables within your control should factor in here.

First and foremost, mitigate the downside of your tapped lands by playing them out early, but be sure to sequence in a way that allows you to enact your gameplan on curve or as close as possible. Don't just consider the turn you're currently on, but the next few turns as well, even if your plans may change. Any threats should pass an extremely high bar before warranting a removal spell early in the game. The exceptions would be cards that can run away with advantage, such as a Sol Ring or Rhystic Study.

Saving removal spells will help us down the road, but it also helps us play on curve and enact our own gameplan so we don't fall behind. The biggest question mark we'll run into is whether or not to play a card that enables other cards even if it is not the mana-efficient option. For example, say I'm playing a legends matter strategy, and on turn four I top-deck Reki, the History of Kamigawa. Alternatively, I can play Ratadrabik of Urborg, a four-mana spell, on curve. In a 1-on-1 format, playing a fragile creature threat off-curve and wasting mana can be a death sentence, but in Commander, the decision is a little more complicated.

When to Consider Sequencing Over Efficiency

My first consideration is always how big is the payoff for being mana-inefficient. In this case, getting a draw engine on board is a huge priority for my deck. The payoff of potentially drawing multiple cards may make this a risk I am willing to take after my other considerations.

Second, what do my next few turns look like? Playing one mana off curve for a turn will set us back only a single mana, but if it means playing our four-mana threat on turn five, then this compounds, setting us back multiple mana and screwing up our pacing for multiple turns. If we built our deck with a proper mana curve then hopefully we'll have another option for turn five or the ability to cast a four-mana and a one-mana spell. For a legends matters deck, two of the most popular commanders, Jodah, the Unifier and Esika, God of the Tree, give us an option from the command zone to play on curve.

If we can plan ahead for our next turn and see that we have options, then casting Reki becomes a more appealing risk. We can also take advantage of these turns where we play off curve to play the tap lands we've drawn over the first few turns. If we have an option like Reki that allows us to play off curve but still cast a spell and get down a tap land then this can save us a tap-land-induced headache down the road.

Finally, my last consideration is how big of a threat my card will be. Having your threat immediately dealt with after playing inefficiently is a huge blow! Casting these spells when there's another threat that is just as scary or more scary is often the better play. Playing Reki into someone who ramped out their commander with a Sol Ring is a safer bet than running him out as the first creature to hit the board. Sometimes this is unavoidable, but remember: Commander is a social game, and you can leverage that in all facets of the game.

After considering these factors, I feel comfortable making a final decision on how to play out my turn.

Mana efficiency and sequencing are a delicate balance that take practice to perfect. The truth is, even after building a strong mana base, it takes a lot of trial and error to learn the ins and outs of sequencing for your particular deck. Consider the hours of work Magic: the Gathering pros put in to learn how their deck functions and how to sequence the play. Now consider that your deck has 40 additional cards with none repeating. It's a learning process, but the more you play your deck, the more comfortable you will become. If you're migrating over from another format, be prepared to challenge your preconceived notions of this balance because in Commander the scales tip much further towards sequencing.

Of course, I cannot say goodbye without sharing a deck for you all to pick apart. The legendary matters deck I referenced in this article is more than just an example; it's been my passion project since the commander was spoiled. Check out my list below for some bangers most people are missing out on for this commander!

Let me know in the comments any rules-of-thumb you follow when choosing to cast a spell off curve!