A Tour of Prismari Campus

Welcome, future and prospective students, to the Prismari School of Elemental Arts! My name is Jaelyn, a Prismari music major, and today I'll be your guide as we meet the school's faculty and students, review the Prismari courses, and look at the general educational classes that we share with our partners over at Quandrix.

For the unfamiliar, Prismari is the school of Strixhaven that focuses on the elements and how they coalesce with visual and performance arts. As such, we cover magic that uses red and blue mana, especially instant and sorcery spells, which act the culminations of our performances. Of course, we share some magic with our other schools of Strixhaven, too, so today, we'll also be covering the classes that we share with Quandrix, which focus on blue mana, and the teachers and students within them. The Lorehold guide, Doug, will be covering the red-aligned disciplines that we share with Lorehold on Thursday, so stay tuned for that!

Here at Strixhaven, each school has three head faculty members: the Founder of each school, and the two Deans, each Dean embodying a portion of the philosophy and disciplines of the school. Typically, a student answers to one of the two Deans, not both, and as such, which Dean you receive instruction from depends on which classes or path you take. As for the Founders, of course, they're the five ancient Elder Dragons, with magical prowess unparalleled across the plane of Arcavios!

Our wonderful Founder is the legendary Elder Dragon, Galazeth Prismari. Galazeth is especially renowned for their use of artifacts for spellcasting, not unlike how Kaza, Roil Chaser is said to use Wizards to cast spells. These artifacts can be anything - utility artifacts, various wizarding equipment, the automatons which patrol the campus, even the Treasures obtained as revenue from Prismari exhibitions. Whatever your choice, Galazeth Prismari is sure to make the best use of them as they perform their own fireworks show. Another technique they use is to draw power from certain artifacts at strategic times, ensuring that their effects don't benefit the wrong player - artifacts such as Howling Mine, Blinkmoth Urn, and, most infamously, Winter Orb.

Uvilda, Dean of Perfection and Nassari, Dean of Expression are two sides of the same coin - quite literally, in fact. Both have an immense passion for the arts, but prefer to go about it in different ways: Uvilda wants to hone in on individual spells and techniques, allowing you to cast that spell much more efficiently later on. This method draws parallels to the ancient Dominarian magic of Suspend, and contains many of the same synergies that Jhoira of the Ghitu and others have found.

Nassari, on the other hand, has a much different style, instead preferring to take spells and inspiration from a range of sources - your opponents' libraries - and cast them as they see fit. Some of our students may find familiarity in this style, as they've seen spells such as Stolen Strategy in the past. Such power is a force to be reckoned with, and every new spell added to the amalgamation that is Nassari's spellbook makes them stronger, not unlike Pako, Arcane Retriever (but with fewer strings attached). 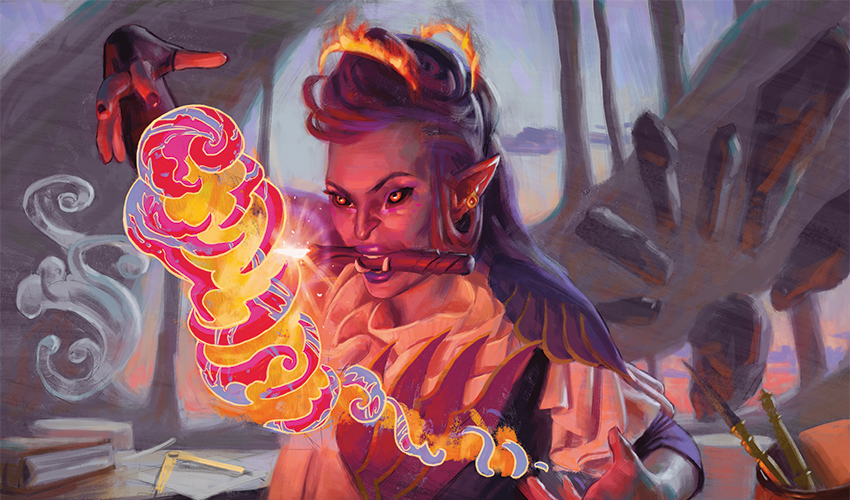 At Strixhaven, you'll find yourself among some incredibly talented students with whom you can work, bond, or even compete. These students come from diverse backgrounds and have even more diverse futures, and we hope you're as excited to work with them as we are.

Rootha, Mercurial Artist is our latest student from the famed Squallheart family, and thus has quite a legacy to live up to. Her mother's work is exhibited all across the campus, and her great-grandparent was the progenitor of Prismari's now-iconic lightning. Just like any visual arts student, her first works take some... heavy inspiration from existing spells, copying and amplifying them on the regular. But as Nassari, Dean of Expression has noticed, her abilities lend themselves very well to more passionate, red-aligned spellcasting. Her ability to double the effects of a Comet Storm or Crackle with Power not only turns heads, but it can wipe out absolutely any opposition, too.

Another pair of students who have recently been accepted are Rowan and Will Kenrith, who attend Strixhaven at the recommendation of Kasmina, Enigma Sage. Although they're twins, you almost always tend to see only one at a time, for some odd reason... but no matter! Rowan, Scholar of Sparks is an exceptionally fast learner, being able to cast spells just a little bit faster than most of our other freshmen. Given her performance at last month's recitals, she's also quite adept at amplifying the effects of these spells with her third ability, although it requires no small amount of investment to cram for those sorts of performances.

Rowan, Scholar of Frost shares his sister's aptitude for spellcasting, although he invests more of his time into study than Rowan. His studies include transmutation (undoubtedly similar to Kasmina's Transmutation), the occasional visit to The Bibilioplex to grab some extra spells, and an impressive grasp of our Resculpt-style magic as a fourth ability.

Speaking of recitals, it's important to cover what is expected of you by the semester's end here at Prismari. Depending on your chosen field of study, you may be asked to provide a final artwork to be examined, a performance before a jury, or a myriad of final shows and recitals. Here, we like to showcase some of the most impressive works created by students in the past so that you can begin to understand what to aim towards.

Central to the Prismari philosophy is the importance of choice. Practical choices, such as what knowledge will suit you best, and artistic choices, regarding what you enjoy the best, or what most embodies you as an artist. This Multiple Choice philosophy ensures that you get the perfect experience for the situation you're in, whether you're seeking knowledge, the ability to set back your opponents, power, or, if you're particularly ambitious, all of the above.

Prismari Command is another phenomenal example of the power of choice. Whenever you need it, this signature Prismari spell can Shock any target, provide card selection, give you a small amount of mana, or even destroy your opponents' artificial creations. Few of these effects on their own are worth taking up a page in your spellbook, but having all four in one allows you to cover a very large number of bases.

Our esteemed Elemental Expressionists are great examples of this flexibility in action. With every spell cast or copied, they can spawn an Elemental from their peers should they fall, providing both extra value (not unlike an aristocrats deck might) and a deterrent should anybody want to harm those creatures. The best part about it? This ability can stack, spawning multiple Elementals out of the same creature!

The story of our resident Torrent Sculptor is a very impressive one. They set their sights very, very high, making use of advanced spells in unconventional ways to grow stronger and empower their own spells. When the time for finals had come, they very diligently produced their own Magma Opus, an advanced and expensive spell suited perfectly to the Sculptor's abilities. To ensure that they would be able to complete said spell, they were able to sell their own work and use the Treasures provided to pay for such a masterpiece.

Other students can learn from the Magma Opus in a similar way. Firstly, it has modality: if you lack the mana to cast the spell, you can instead abandon it (hopefully temporarily) to create Treasure, which will help you cast it later on. When you do get around to casting it, you can make use of a multitude of practical applications - setting your opponents back while pushing yourself forward. Although the applications may not have the raw power of similarly expensive spells, such as Expropriate, it being an instant and having a high mana value can be enough for some strategies, since it doesn't have to be cast for you to gain value from it.

As a Prismari student, you're encouraged to study a wide range of arts and humanities, which can be both a blessing and a curse. We've all heard of the phrase "jack of all trades, master of none", and a Culmination of Studies at the end of your first year may reflect this. Culmination of Studies proves a moderate proficiency in burn magic, Treasure creation, and card draw, but if you're in need of any of these things in particular, it may be better for you to seek out expertise in one of them, with a spell such as Pull from Tomorrow or Comet Storm. If you're weighing your likelihood of a passing grade with your Culmination of Studies, some Quandrix students have devised this formula to help you determine how likely you are to succeed. But don't tell Dean Uvilda!

Prismari boasts a wide range of classes, and although some may be more common than others, they still have the potential to hold quite a lot of value.

As some fields of study across the colleges overlap, each school has some general education courses which are taken by several students across Strixhaven. Here are our blue-aligned specialties!

When you're regularly sitting down at a table with three or more other players, there's important decorum to learn - and sometimes, you can take advantage of that decorum to gain the upper hand. Ingenious Mastery allows you to do just that, reaching out to a friend across the table to work towards a mutual goal, building yourselves up against a common enemy. When no such friend is available, though - or when you are the common enemy - it's a passable means of drawing from your library, especially if you can reduce the cost of the spell.

Our new and former professors, for better or worse, can be very wizened, and they bring with them tales from all over the world (and even beyond). One such Archmage Emeritus is notably infamous for this, as every time a student casts a spell, the old professor begins a tangent about their time as a student, how they learned that spell themself, or how it saved them as they were spelunking in a cave that you'll never hear of again. Sometimes, though, that story contains useful information! And when it does, the wizened Archmage Emeritus will prove very useful.

Professor Onyx has been quite concerned as of late about the presence of the Oriq in our Biblioplex - and if the legends are true, they are quite adept at manipulating impressionable young minds who may be Tempted by the Oriq, such as a Deathrite Shaman. But surely, the Deans would never let such a thing happen. Hey, is that Killian, Ink Duelist? I wonder where he's going....

And that concludes the Prismari Campus tour! I hope that you got a good grasp on what Prismari has to offer and how to use the services that we provide to further your own masterpieces.

What do you think of the college? What about the tour itself? Are our courses to your liking? Speaking as a music student, I'm thinking that Prismari spends a lot of time focusing on combat and such within the Mage Tower at Strixhaven Stadium - but schools neglecting the arts for the sake of sports is hardly something new. Regardless, I look forward to utilizing these new tools to play my own Flamethrower Sonata. Maybe I should add cannons to it, just like Tchaikovsky intended!