Welcome My Friends to the Show that Never Ends

Welcome to Superior Numbers, where I try to do numerical analysis on cards and deckbuilding trends using a little bit of math.

Midnight Hunt spoiler season is over, and we can now take a minute to take a deep breath, relax, and enjoy all the new cards this set added to our decklists.

Just kidding - Crimson Vow releases on November 19th. That means the pre-release will happen on November 12th. So spoilers will be need to be finished by the 5th. Assuming the standard two weeks of spoilers, those will start October 22nd, and that means the usual official hype card or two that get teased a couple weeks before spoilers begin should start dropping... probably around now.

So what's the practical reality of the never-ending parade of core sets, expansions, non-rotation releases, reprints, Commander precons and Secret Lair drops? Let's check out some numbers, and a little bit of history.

We’re So Glad You Could Attend

Let's start by looking at the legendary creatures. Legendary creatures have been a part of the game since, well, Legends. Weirdly, it didn't happen earlier; apparently there were a lot of unremarkable dudes wandering around Rabiah named Abu Jafar, Ali Baba, and King Suleiman that didn't quite deserve the legendary tag? There's no individual Ali from Cairo or Aladdin, but apparently many Ali from Cairos and dozens of Aladdins? Preposterous, if you ask me.

Now, if you'll excuse me, I'm off to see one of the many Old Man of the Sea I know.

Originally the legend supertype was intended largely for flavor, and mostly served as a downside for the cards tagged as such. Occasionally something like Cathedral of Serra would come along and grant a busted ability like bands with other legendary creatures, but by and large, the legend supertype served as net negative, especially given the way the legend rule worked at the time. If you want to read about that in more detail, I wrote an article about it several years back that you can find here.

It was such a downside that they actively stopped using it as often on noncreature cards, particularly lands. That's why Zendikar apparently has a bunch of mountains called Valakut, the Molten Pinnacle. 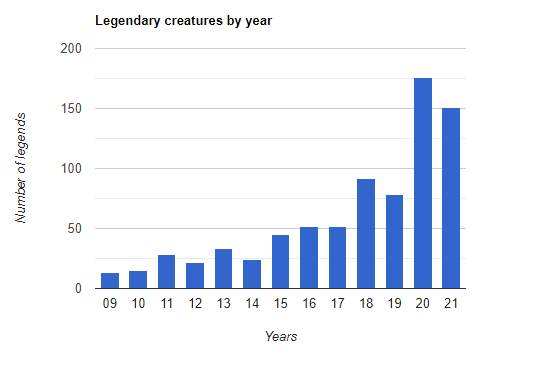 Since the rise of our favorite format, the number of legendary creatures released per year has gone up dramatically, and note that these stats come before we tally in Crimson Vow and any of its associated Commander precons.

We're looking at a tenfold increase in legends from a dozen years ago, even before factoring the late fall expansion.

So what does this mean for us actual Commander players? It means Wizards of the Coast is clearly trying to kill Brian Canada, the player who's vowed to make every possible EDH deck. Besides their blood vendetta with Brian, though, it means a lot of things, most of which are positive. For starters, more choices means it's easier to find something that fits your playstyle.

From among those, Uril, the Miststalker and Child of Alara are tied for the most decks at 840. By the time this article is published, that will be less than the number of decks found for Tolovar, Dire Overlord, a commander that was previewed less than a month ago.

Now, there are a lot of reasons for the lack of popularity of these commanders. For starters, WotC wasn't designing for EDH back then, so half of these commanders cost roughly 14 mana to cast or don't have particularly Commander-scaled abilities. They're also old enough that a lot of players may not know they exist. (And in the case of Iona, she's just flat-out banned.) Pickings were slim back in 2009, as Commander was just starting to ramp up. There's no mono-green legend from that year, and there aren't even options for most color pairs.

Flash forward to 2021, where we got eight new options for Orzhov alone.

There's just an exponentially greater number of more diverse choices in terms of colors, power, deck theme, and style. There are more choices for commanders that won't look like the same choice as the person who sat next to you at the EDH table.

In 2009, when there were only 13 new legendary options, and many of them were pretty terrible in the command zone, what were the chances that multiple players chose to build Uril, the Miststalker? After all, it's a hexproof Naya enchantress, powerful Voltron (especially with an Ancestral Mask), and it costs like 19 less mana than most of the other legends that came out that year. The odds were good that Uril was in more than just your hands, but maybe also in the hands of the player next to you, or in the next pod, or at the next table.

Now, let's look at 2021 again. After about a year, Harald, King of Skemfar has less than 70 decks built in the EDHREC database. He's aggressively costed, with evasion baked in, and provides card advantage every time you reanimate him, or blink him with Conjurer's Closet, or bounce him with Erratic Portal. Is he the best Golgari Elf commander ever printed? No, certainly not, but he's one of the least popular commanders out of the 150 printed so far this year, and he's way more brewable than a lot of the 13 we saw in 2009.

You can legitimately show up with something new and surprising today in a way you couldn't all those years ago, and that's a good thing.

Come Inside, the Show’s About to Start

Here's the amount of new planeswalkers printed by year since the inception of the planeswalker card type:

Some of these stats are a tiny bit misleading. A few of the years starting around 2016 were artificially buoyed by the intentionally bad planeswalker deck cards designed for new players (Nissa, Nature's Artisan, et al). There's also an artificial bump in 2019 from the planeswalker-centric War of the Spark. Still, even ignoring that, we've seen a steep climb upwards in the amount of new planeswalkers released per year.

Just like the rise in legendary creatures was really useful for Commander players in a few different ways, the influx of new planeswalkers also provide a lot of new fuel to EDH decks. Plus, they give new options for the dozen or so people still playing Oathbreaker. Everybody wins.

Okay, so what do these true numbers look like? 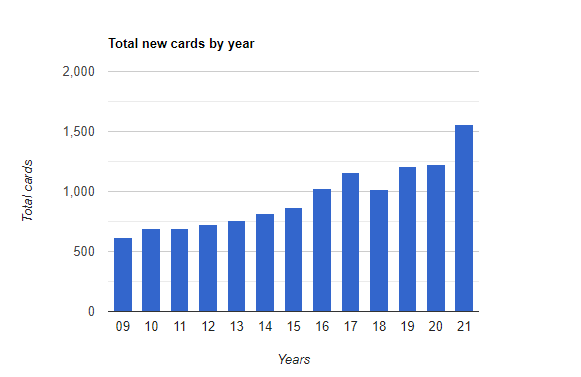 When all is said and done, 2021 will have given us almost three times as many new cards as there were in 2009. That's an amount of cards that will seem overwhelming to a lot of people, even given the positives I've mentioned.

Guaranteed to Blow your Head Apart

So what do we do with all of this information? Honestly, I'm not rightfully sure. If nothing else, it should put into context just what it really means when people talk about how it seems spoiler season never ends. Eternal spoiler season is just what happens when you release three times as many cards as you did a dozen years ago, especially when those releases are much more specifically targeted for the Commander demographic.

Sound off below with what you yourself think of the perpetual spoiler season, and let me know what downsides you see to go with these upsides. Until then, I'm Dana, and may your numbers always be superior.