The 600 - Predicting the Popularity of Warhammer 40k Commanders 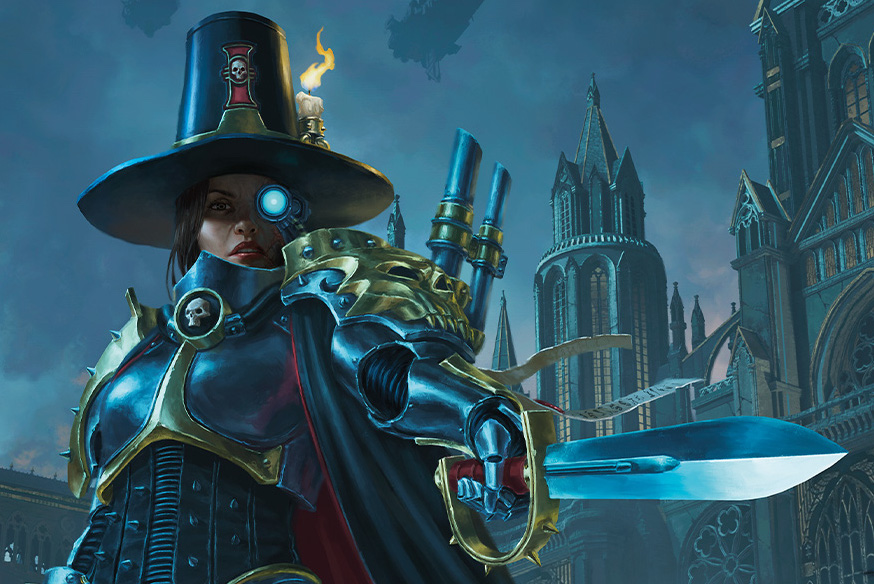 Welcome to another edition of The 600, the article series where we predict the popularity of new Magic—excuse me, Warhammer 40k—commanders. In this article, I’ll do my best not to offend Warhammer fans with my knowledge of their game's lore (I have none).

Each commander receives an Over or Under grade. Over means I predict over 600 commander decks after one year of circulation, while Under means the opposite. There's also one Can't-Miss Pick, which is my sure-fire, Men's Warehouse-style guarantee.

And now, it's Hammer Time.

Mono-white isn't as bad as it used to be, but it's still not great, especially on this understatted five-mana commander. Celestine is somewhat redeemed by her effective keyword combo and recursion ability, yet I think her cons will ultimately outweigh her pros.

As a traveler, Anrakyr's been everywhere, man, but will he visit 600 EDH lists?

I'm guessing yes. That ability is pretty broken, especially when casting Wurmcoil Engine, Aetherflux Reservoir, or any number of new artifacts from this set.

This one I'm less enthused by. Feels more like an interesting rare you'd find in a Standard expansion than a commander, you know? Usually black wants to sacrifice tokens to cards like this, yet Szeras demands real cards. I'm out.

Mono-black aggro artifacts may be narrow, but that doesn't mean it isn't good.

You can trigger Imotekh's Phaeron ability all kinds of ways, like with reanimator cards, Delve spells, exile effects, and more. Trigger it enough and you'll have your own private army, plus a free +2/+2 and menace bonus to toss around. This card seems both sweet and fun to build around. What more can you ask for?

Mortarion is the sort of bad influence your mother warned you about in school: he rewards you for doing something detrimental to your health. He's also a six-mana commander with no immediate value. Sure, he goes off with Bolas's Citadel, but what doesn't? Your mother doesn't approve, and I don't, either.

Reporter: So, King Szarekh, can you tell us more about your proposed tax on acrylic paint for miniatures?

Silent King, indeed. But seriously, is anyone else underwhelmed by this dude? For a mythic rare front-of-the-box commander, all he does is mill and usually draw a card. Imotekh seems far more powerful, so I'm guessing it will collect most of the decks. Tough to go Under on a face commander, but I'm doing it here.

They finally did it. They turned Necrotic Ooze into a commander, and the options are indeed infinite. For example, you can draw your whole deck for free with Asmodeus the Archfiend and Skirge Familiar in your graveyard. Trazyn also gets activated abilities from opposing graveyards, so you can strategically kill opposing creatures to steal their juice. Sounds good to me.

Not sure I'd choose a guy named "The Betrayer" to lead my commander deck. Furthermore, though Khârn seems fun, he's more of a standalone oddity than a clear build-around. Look for him in the 99 of Xantcha, Sleeper Agent decks, but probably not on his own.

The Red Terror (a.k.a. Lord of the Pingers) gets big fast. Problem is, if you're into this effect, you probably already have a Torbran, Thane of Red Fell deck. I doubt many players will be compelled to abandon it.

With a name like "Old One Eye" I was expecting a friendly geriatric cartoon catfish or something. Instead we get 11 power and toughness over two bodies, all of it with trample, plus the potential for recursion. Also, it gets downright scary with blink effects and Populate. Forget the catfish—I want to play this card.

I'm sure you can get up to some infinite nonsense with this fellow, but other than that, this card seems boring. Tap for some tokens, tap the tokens to draw cards... doesn't seem especially exciting to me. I think the EDH community will agree.

One word on this card spoils it, and that word is this: legendary.

Not the legendary in Inquisitor Eisenhorn's typeline, though. It's the legendary on the token. Without that, you could accumulate some Clues, then crack them on each opponent's turn. If you hit an instant or sorcery, you'd add to your army of 4/4 flyers. But with a limit of one Demon at a time, I don't see this card making 600.

I like the design on this one. Unless there are no other creatures on the battlefield (unlikely), you pretty much only pay for Lucius once. After that, just pick the creature most likely to die or blink. With the dearth of targeted removal in Rakdos, it should be easy to get your Lucius back.

How to make all this worthwhile? Here are a few ideas:

Those are just a few that come to mind, but I'm sure you can think of more. While you do, let me give my grade...

Deathleaper, huh? Who does this guy think he is, Evel Knievel? Now that I sound like a grandfather, I'll continue with my evaluation.

I can't tell what's going on in the artwork, and I'm dubious of any card with the word "flesh" followed by "hooks" in its text. I'd be more into the ability if it was actually surprising, but since Knievel—I mean Deathleaper—will be in your command zone, your opponent always knows it's an option. I'm leaping to avoid this one.

I find it hard to imagine why Severina would summarily execute her troops. Stealing toilet paper rations, perhaps?

Whatever the reason, she's an excellent commander. Leading from the Front is an outstanding payoff for going wide, while the aforementioned Summary Execution helps dig to more action and keeps you alive while doing it. Forget the Charmin—this commander is a classic.

You've got to really trust your playgroup to believe in this card. Its value is entirely contingent on how likely your friends are to give you something awesome from the graveyard. In my playgroup, the answer would be, to quote Jerry Seinfeld, not bloody likely. Also, that's assuming you've found a way to damage someone with your 3/3 non-evasive commander.

Neyam seems sort of fun, but overall too finicky to find widespread success.

And here I thought The Red Terror was a Pinglord! With our friend Ghyrson here, basically any blue, red, or colorless card with the number one on it becomes playable. I'm talking Goblin Sharpshooter, Electrickery, Gelectrode, Hellrider, and more. When raw power meets a novel design, you've got to take notice.

My prediction: Over (Can't-Miss Pick!)

No matter how many variations of Izzet spellslinger commanders we get, there's always room for more. I believe Magnus the Red will be the latest demonstration. Effectively changing your Dragon Fodder effects into mana rocks seems sweet, especially in tandem with X spells or splashy mythics, like Magma Opus. Easy pick here.

Sweet hat, annoying card. Thanks to the Unquestionable Wisdom ability, Greyfax lets you attack with your creatures, then tap down opposing blockers with Hunt for Heresy, all while accumulating Clues. (If you're like me and constantly encountered Frondland Felidar in Ikoria Draft, you know how annoying this can be.)

I suppose you go for a saboteur-style deck here, employing creatures with abilities that trigger when they attack or deal damage. Seems okay, but probably not something that will find widespread popularity.

Is that a mark of Avacyn above Marneus's head? Hey, this isn't Magic, this is Warhammer! Get that thing outta here!

Gripes about the art aside, this card is clearly excellent. In terms of tokens, opt for repetition over volume, since simultaneous tokens won't yield extra cards. I hear some players have found this design lazy, comparing it to the infamous Chulane, Teller of Tales. While I don't disagree, Chulane also boasts over 5k decks.

Will Marneus Calgar reach 40,000 decks in honor of Warhammer 40k? Only time will tell.

Cascade on a commander is like guacamole on a burrito: you just know it's going to be a hit. Sure, his head looks a little small and I have no idea what an "Astartes" is. Also, Abaddon the Despoiler is a lightning rod for removal, since your opponents are heavily incentivized to kill it before you can untap with it. Despite those minor shortcomings, Abaddon feels like an easy Over to me. Pass the guac.

Demon tribal is sweet, yet challenging. The previous best commanders for this strategy were Rakdos, the Showstopper and Raphael, Fiendish Savior. While both are solid, neither really breaks the archetype.

Be'lakor does. He basically casts a free Damnable Pact on entry and gives you a free Warstorm Surge afterward, all while providing a relevant body. If this doesn't earn and Over, I don't know what will.

The closest comp we have to our friend Lucea here is our other friend Zaxara, the Exemplary, who leads 6,058 decks and ranks #38 all-time. Swapping red for black is an improvement, since now you get access to classic spells like Bonfire of the Damned and Comet Storm, plus newcomer Shivan Devastator. It may not be next year, but eventually, I wouldn't be surprised if Lucea earned even more decks than Zaxara.

Despite being on the box of its commander deck, The Swarmlord is way worse than Magus Lucea Kane. Scaling up throughout the game is nice, but without evasion, it's less nice. The Xenos Cunning thing is also decent, but if I had the choice, I'd rather cast double Bonfire of the Damned than cantrip my creatures, thanks.

All that said, it's hard to pick against face commanders. I'll give it an Over, but I'm not happy about it.

My (reluctant) prediction: Over

Almost a perfect split on this set. Feel free to check back in a year, and we'll see where the hammer fell.