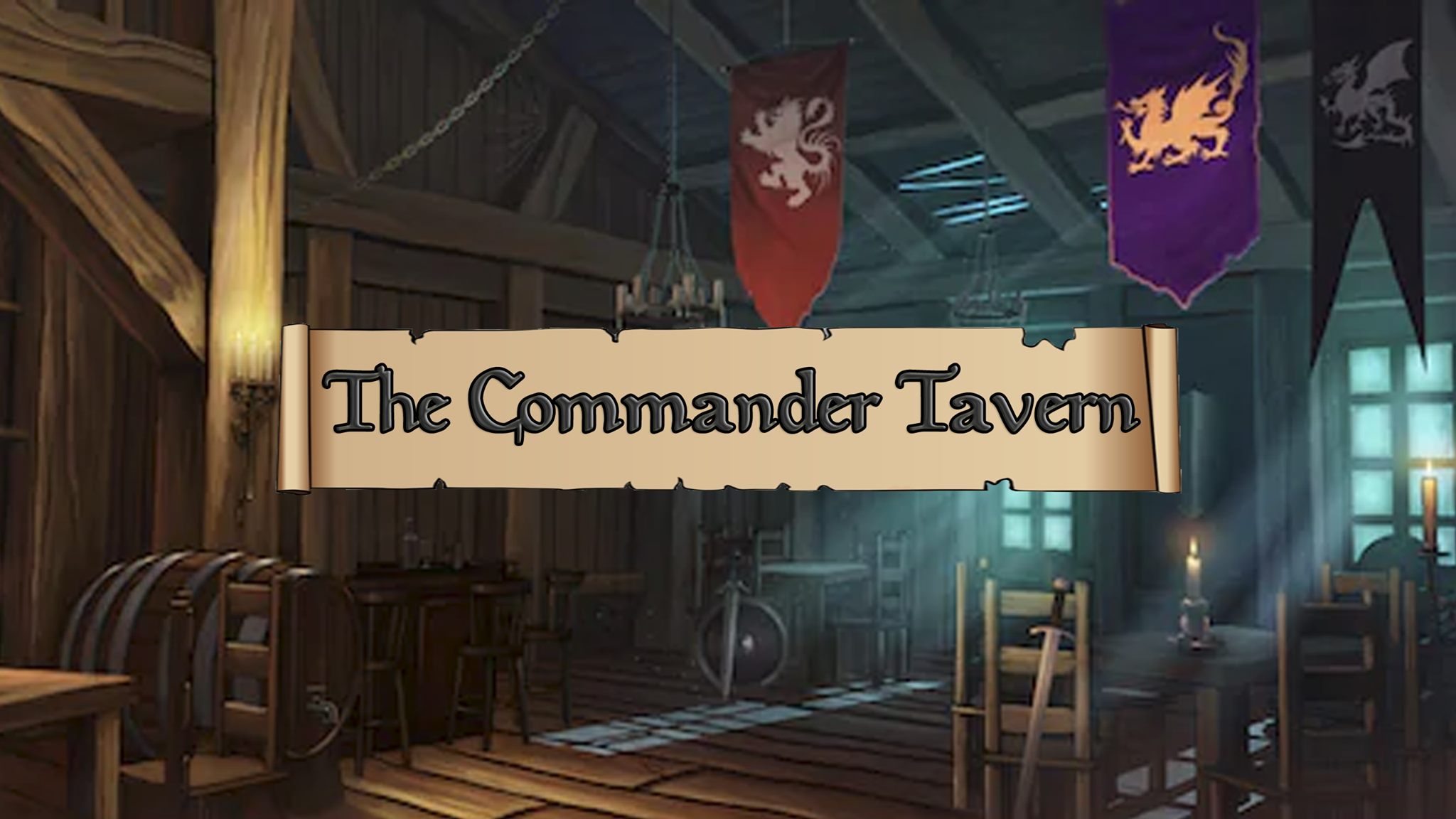 Greetings, everyone! Welcome to The Commander Tavern! I am Demented Kirby and this is the 11th episode of one of the series on this channel, Barkeep Upkeep.

This episode is to inspire playgroups to develop their own “commander league” so they can still feel like they’re part of events and things like that even though most playgroups have to play online. Here’s the current bonus/penalty list I’m currently tinkering with:

• Archenemy: Eliminating all opponents in a single turn. (-2)
• Berserker: Eliminating a player before their fourth turn. (-2)
• Betrayal: Going back and/or breaking a deal struck with another player. (-5)
• Bewitcher: Attaching 2 or more auras to an opponent. (+1)
• Bloodthirsty: Being the first to deal damage to an opponent. (+1)
• Ceaselessly: Getting a storm count of 10 or higher. (+1)
• Chromatic: Playing cards outside of your commander’s color identity. (-1)
• Comeback: Eliminating an opponent while having 5 or less life. (+1)
• Denier: Countering 4 or more spells with spells. (+1)
• Educator: Causing an opponent to draw 5 or more cards via a single spell or ability. (+1)
• Enchanted: Controlling a creature enchanted with 4 or more auras. (+1)
• Exemplary: Eliminating a player via commander damage. (+1)
• Figurehead: Ending the game without your commander leaving the command zone. (+2)
• Firestarter: Dealing 12 or more damage in a single turn with targeted spells and/or abilities. (+1)
• Forgetful: Causing an opponent to lose the game by drawing from an empty library. (+1)
• Genius: Drawing 20 or more cards in a single turn. (+1)
• Headhunter: Eliminating an opponent without interacting with any other player. (+2)
• Healer: Causing an opponent to gain 10 or more life or preventing 10 or more damage that would be dealt to an opponent. (+1)
• Historic: Constructing a deck where all cards are currently legal in Historic (outside of a challenge). (+2)
• Inconsiderate: Lose 1 point for each extra turn after the second consecutive turn. (-X)
• Kleptomaniac: Controlling a permanent owned by each opponent. (+1)
• Legendary: Controlling 5 or more legendary creatures. (+2)
• Lord: Controlling 7 or more creatures that share a creature type. (+1)
• Machiavellian: Winning the game without invoking state-based actions. (+1)
• Masochist: Dealing 6 or more damage to yourself in a single turn. (+1)
• Minimalist: Having 10 cards or less in your library. (+2)
• Modern: Constructing a deck where all cards are currently legal in Modern (outside of a challenge). (+2)
• Participant: Participating in a commander game. (+1)
• Pauper: Constructing a deck with only common cards (including the commander) (outside of a challenge). (+4)
• Pioneer: Constructing a deck where all cards are currently legal in Pioneer (outside of a challenge). (+2)
• Popular: Controlling 3 or more planeswalkers. (+1)
• Proficient: Controlling a creature equipped with 4 or more equipment. (+1)
• Prolific: Controlling 10 or more creature tokens. (+1)
• Reckless: Causing yourself to lose 20 or more life in a single turn. (+2)
• Spiteful: Destroying all lands that a single opponent controls. (-2)
• Stalemate: Ending the game in a draw. (+1)
• Standard: Constructing a deck where all cards are currently legal in Standard (outside of a challenge). (+3)
• Stealthy: Eliminating an opponent during another opponent’s turn. (+1)
• Survivor: Surviving lethal damage on three different occasions. (+1)
• Thoughtful: Causing an opponent to gain control of a creature you own and control. (+1)
• Toxic: Eliminating a player via poison counters. (-1)
• Treacherous: Eliminating an opponent with a spell or permanent they own. (+1)
• Trismegistus: Resolving your commander from the command zone 3 times. (+1)
• Unconventional: Beginning the game with a noncreature commander in your command zone. (+1)
• Underdog: Eliminating an opponent with a 1/1 creature. (+1)
• Unending: When performing a series of spells, abilities, and/or triggers more than four times in a row, lose 1 point for each iteration after the fourth. (-X)
• Variety: Constructing a deck where all nonbasic lands have different expansion symbols. (+3)
• Vengeful: Simultaneously eliminating a player along with yourself. (+1)
• Victim: Being the first player eliminated. (+1)
• Victor: Eliminating an opponent (+1)
• Wrathful: Destroying all artifacts or creatures that a single opponent controls. (-1)

Have you played in commander leagues before? How has your experience been? How about implementing one with your playgroup? Let me know in the comments.