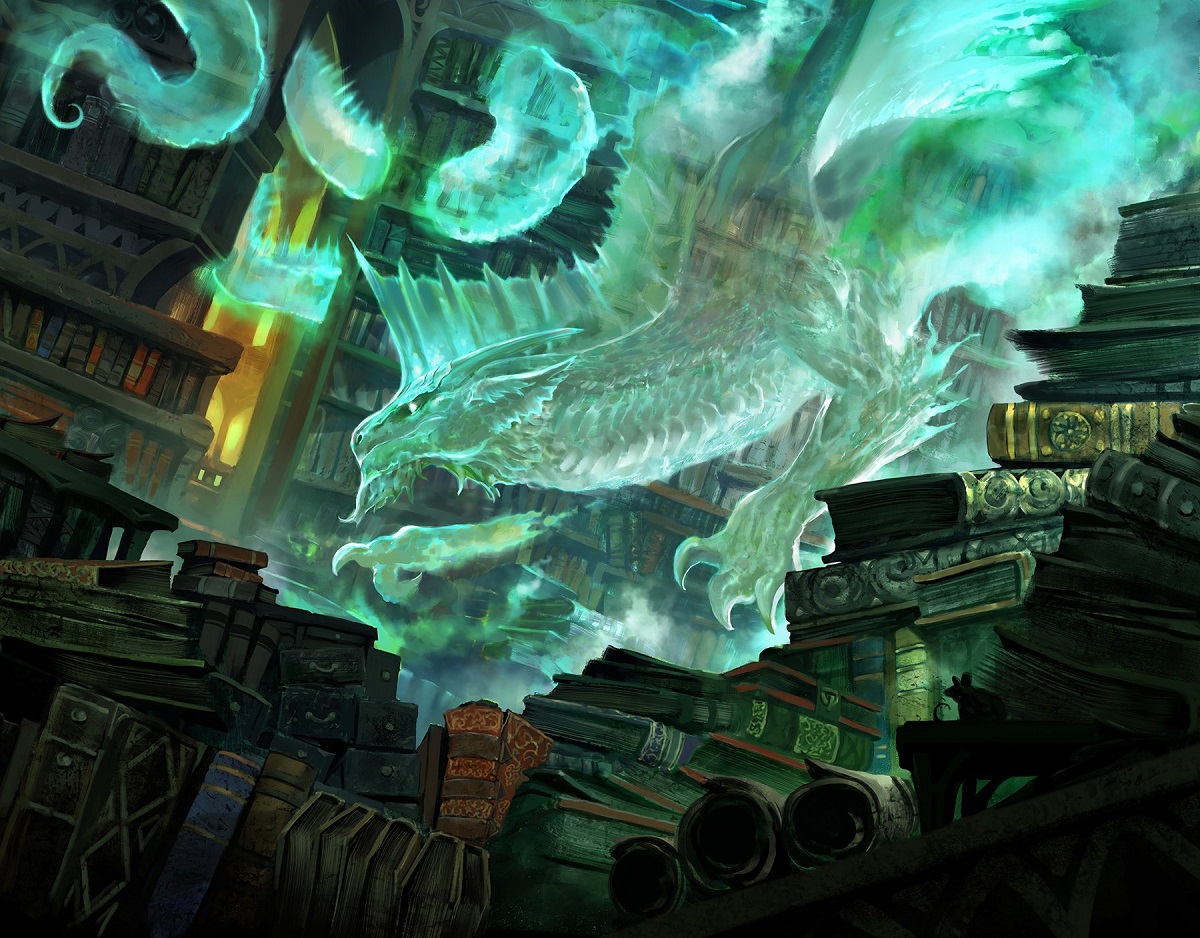 Welcome to The Latest Hotness! I'm Jeremy Rowe, also known as Coach J Ro and the Unsummoned Skull. Three new commanders enter the Top Ten Rankings this week, but all of the most popular decks are boasting some cool new tech. Each new set brings with it a variety of tools for players to experiment with, which makes opening packs exciting and buying singles fun. Decks are always works in progress, representing the planes their controller has visited and the experiences they want to remember. Each card tells a story, and players play what they love, popular or otherwise!

We start with a big shift, a new face from Commander Legends: Baldur's Gate! Who would've thought that the latest Dungeons-and-Dragons-themed set would so heavily feature Dragons? Combining a big, beefy threat, evasion, protection, and an absolutely ham-tastic triggered ability, this new kid on the block has shaken things up in a big way. Combine a popular creature type, solid ramp colors, cloning shenanigans, and a cheap price tag, and you have the makings of a commander that is primed to shoot up in the rankings, which is exactly what Miirym did! The triggered ability, which creates a token copy of any nontoken Dragon entering the battlefield under your control, enables any motley crew of scaly overlords to blot out the skies and playmats!

While its rise wasn't quite as meteoric as its newfound Temur brethren, the pentad progenitor has risen to the spot right behind it. Flying, firebreathing lizards are dominating the top spots, chomping up the competition and lording over all. In particular, five-color decks have gained colorfixing and mana flood insurance in form of the completed Triome series, especially Ziatora's Proving Ground and Jetmir's Garden, which are searchable with cards like Nature's Lore, also recently reprinted. These changes have made the deck more consistent, as the Eminence ability only reduces generic costs, meaning that colored costs can still be a prohibitive factor when setting up explosive turns.

Wilhelt is another commander with an uncharacteristic rise. Unlike the Dragons, who gained new strategies in new colors and a significant rise in consistency and power, Wilhelt only gained some minor pieces. He's still from a powerful tribe, with ties to a popular strategy, and he's a strong token engine with a card draw ability to keep the juice flowing. In particular, Black Market Connections is showing up in 40% of new Wilhelt decks these days. It provides a similar card advantage flow, making a Treasure, drawing a card, and making a Changeling (therefore a Zombie) every turn for the price of 6 life. Even outside of Innistrad, Wilhelt is collecting new and interesting toys!

Prosper hasn't exactly prospered, but he has risen in popularity. Treasures keep growing ever more ubiquitous, but the reason for this rise is also the addition of impulse draw and cast-from-exile effects, as well as support for doing so. Wand of Wonder is a nice pickup from Battle for Baldur's Gate, enabling its controller to cast of one or more instants or sorceries for free from exile, which then triggers Prosper, making Treasures. Passionate Archaeologist is another new and bonkers card that turns Prosper's card advantage into a win condition by damaging an opponent each time a card is cast from exile. Cards like this have surely reinvigorated some deckbuilding energy for Propser's exile-y ways.

Lathril couldn't quite retain the #4 spot, but it only dipped by one step. Elves are still extremely popular and accessible, and there have been some new Elves for Lathril lately! Gala Greeters, with its many gorgeous regional variants, is an Elf that triggers whenever a new creature enters the battlefield, something these pointy-eared swarms tend to do a lot. Growing themselves, making mana, and gaining life are all things Elves do well, and the Greeters do all three! Jaheira, Friend of the Forest is another great pick-up for Lathril, acting as a pseudo-Cryptolith Rite for tokens, allowing the deck to be even more explosive. Lathril makes tokens when it connects in combat, so the two make an excellent partnership!

Combat is a big deal in lower power levels, and a cheap, efficient Samurai facilitates a home for generic, powerful attackers as well as the previously under-supported and disparate Samurai tribe. There are plenty of powerful Mardu attack-step-focused creatures, such as Alesha, Who Smiles at Death, and Isshin lets them trigger twice to accrue tons of value. Samurai were always a much-loved creature type, but the lack of a multicolored commander meant that they couldn't adequately come together until this three-mana beast of a commander emerged to unite the old and new, to lead from the front, and to smash anything in his path.

Korvold, like his Dragon brethren at the top of this list, is still enjoying success, but not as much as he once did. Then again, when you're flying as high as a Dragon king, there's a limited amount of rarified air to breathe your fire in. Korvold is still enjoying having a new hidey-hole for his palatial riches in his Bootleggers' Stash, which lets lands tap to make Treasures, creating wave after wave of value and enabling Korvold to tap out on end step, untap, and make someone's day very violent, indeed. Ziatora's Proving Ground also gave Korvold a flood-protection land that can fix colors, which helps in a deck that needs enough mana to cast big spells, which then can provide the mana to continue with the big, swingy plays. More Treasure cards keeps this beast happy, but all the new Riveteers commanders may have introduced just a teensy bit of competition to his domain.

Atraxa's stay among the heavenly chorus has led to a horrifying descent down the rankings, but it has maintained some decent support. It turns out that four relevant combat abilities, decent stats, and a noncombat ability with wide-ranging implications make a pretty good package! Lae'zel, Vlaakith's Champion not only introduced a new creature type to the game, it also added a Doubling Season-style effect on an efficient body to add additional layers of counters to the growing army. Speaking of additional layers of counters, Brokers Ascendancy works well with both counters on creatures and counters on planeswalkers, which also synergizes with the Superfriends variants!

Yuriko has dropped substantially, but still remains in the top 10 of decks built in the last week, largely on the strength of Kamigawa: Neon Dynasty. The push for the popular creature type, aggressive deck style, and subversion of Commander Tax have helped her dig her claws in and hang onto her spot on the list. Shadow of Mortality is a solid addition to this deck from Streets of New Capenna that comes with a hefty 15-mana cost, making it an awesome flip off of Yuriko. An Offer You Can't Refuse is another popular addition for Yuriko as well, helping to cheaply protect the commander, her board, or even dismantle an enemy's noncreature wincon spell!

In a miraculous rise, Myrkul, a seven-drop commander, claims the last spot on the list! Abzan is another color grouping that, like Temur before it, has been plagued by a limited number of commanders to build around, but Myrkul overcame that hurdle to make this list. Myrkul has the God creature type and turns dead creatures into enchantments, so it works well with the Gods of Theros as well as aristocrats strategies, since it triggers when creatures die. It comes with a high amount of power, so it can threaten commander damage in just three swings, as well as indestructibility if the owner is below half life. Still, it's unusual for a commander with such as large mana cost and no cost-reduction ability to make such a big impact! I suppose that in green, all things are possible!

Dropped Out of the Top 10 Most-Built Commanders of the Past Week:

Those are the 10 most popular decks on EDHREC as of this week. Which ones have you built? What are some interesting ways you've seen them taken? What's the Latest Hotness that's inspiring you?