The Tribes of Ixalan — A Primer 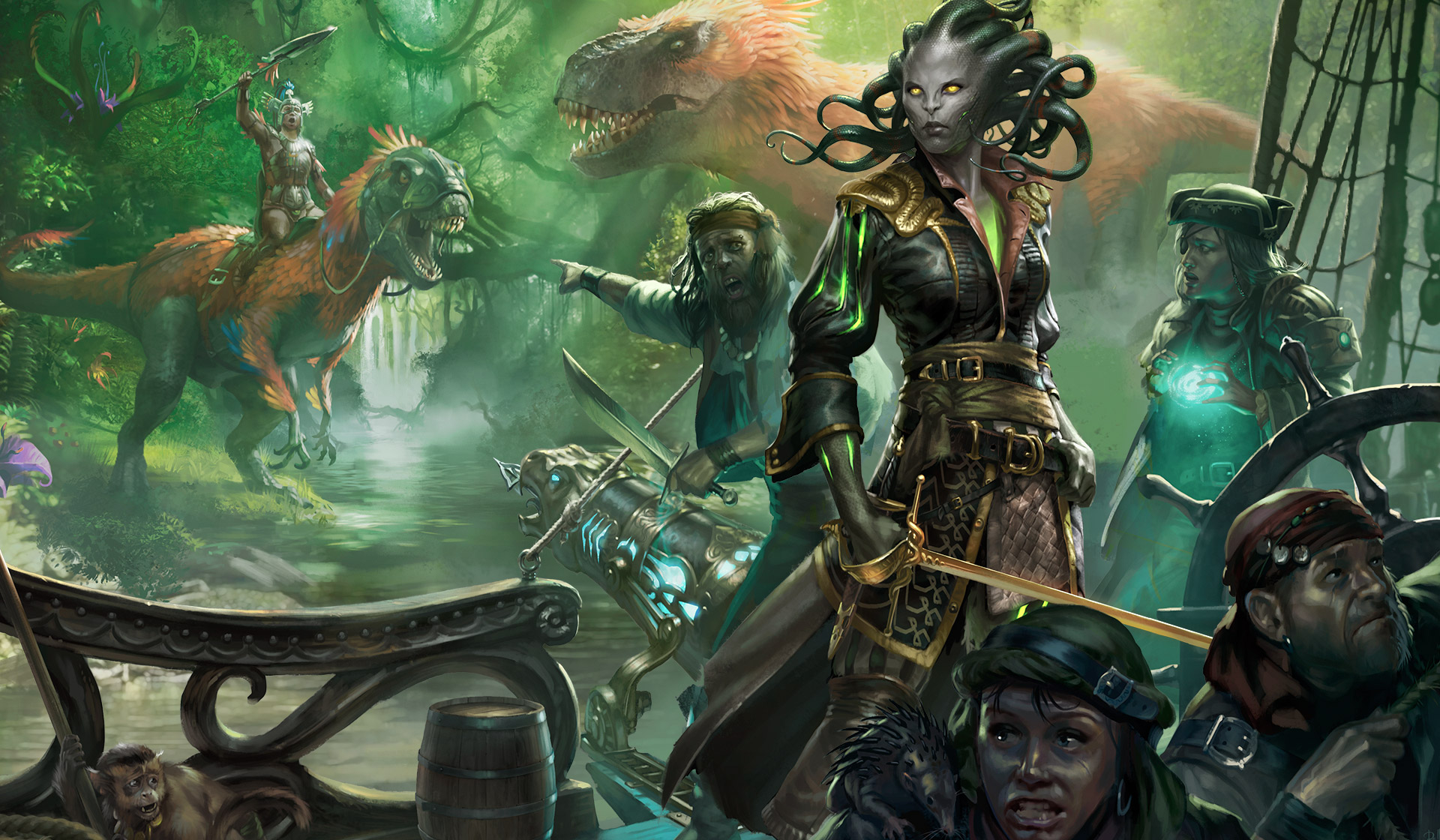 Welcome to the EDHREC primer about the tribes of Ixalan. Ixalan is a magical land where dinosaurs roam the earth and pirates rule the high seas. There's buried treasure, some new Planeswalker friends and the Standard format gives us the opportunity to have dinosaurs crew flying vehicles, making my childhood wishes all come true.

I want to touch on each tribe briefly and talk about the implications of each. This will be a fun, interactive primer with some of my analysis, a few homework problems to bring to class next time and hopefully a few chuckles. Let's get down to business and talk about the Ixalan tribes!

Vampires in Ixalan are Black and White which makes the Mardu-colored Vampires deck in Commander 2017 suddenly make a lot more sense. Ixalan may give our new Mardu Vampires decks a few new cards to play with, which will be great. The subthemes appear to be lifelink, token creation, and not having that many cards spoiled yet. Expect Anointed Procession to be a factor in Vampire decks if we have a few more cards like this one. The Black Vampires of Ixalan are a little bit more like traditional Vampires and should play nice with existing decks built around cards like Olivia Voldaren and not Vampire Nocturnus, because that's not Legendary. Can you believe that? They have Vampires with lots of subclasses but so far, no "Vampirates" which would make me smile, although I'm not sure how useful a pirate that can only sail at night would be. Wizards clearly cares more about function than flavor, otherwise they would reprint Treasure Cruise (and ban it in Standard right away, probably).

Check out the page for Olivia Voldaren to get some Vampire deck ideas.

The page for Edgar Markov could show you where to park some White Vampires, also.

Show a Red player the card "Invite the Party" and report back to the class whether they cried blood or vomited blood.

Despite printing very dinosaury cards in the past, WotC has finally given the people what they want, and by "the people" I mean "filthy casuals" and by "filthy casuals" I mean "fine, fine people, great Magic players and wonderful human beings, please don't dox me, I have a family." Now that Dinosaurs are an official type, do you think they will go back and retroactively make some beasts from Magic's past into official Dinosaurs so you can play them in an EDH deck even though it would mean carrying around printed, laminated Oracle pages for every creature in your deck because there's no way people are going to believe that Rampaging Baloths is a Dinosaur unless you have evidence? I'm only asking because otherwise there aren't enough Dinosaurs to build a deck around this guy, and in that case, why is it Legendary? Will there be enough Dinosaurs for this to ever hit in Limited? Standard? 100-card singleton? We need a few cards like Imperiosaur (It has "saur" in the name for Pete's sake) to get some errata before we ever sniff EDH playability for this card, but I still think people are going to try. Jam the deck with cards like Chameleon Colossus for now and hope the second set in the block gets us to that critical number. some of them seem designed to play well as part of a unit. With Dinosaurs being printed at rarities other than "Mythic" I could see there being enough Dinos when this block is complete to build a deck around Gishath which means we get to play with this beauty. This is the most specific Planeswalker ever printed. The emblem on Gideon that's only good if you have other Gideons is less specific than this. It's pretty good in a Dinosaur deck, I guess, but we need enough Dinosaurs for it to be worth it.

The subtheme of the Dinosaurs deck is Dinosaurs that are good outside of a Dinosaur deck. Kinjalli's Sunwing is very useful to people who play at an LGS that still lets people play Felidar Guardian combo. It's pretty good against creatures with haste, also. Why play a Hatebear when you can play a Hateosaurus? You wouldn't, that's why.

Try to build a deck around Gishath with an average CMC under 5.8. Cry when you can't do it.

Ixalan Merfolk are Green, because Wizards looked at Gaea's Skyfolk, the Icarusian Merfolk who dared to dream and said "Why not this but all day?" Simic Merfolk are nothing new, for example, Return to Ravnica block had four of them.

For inspiration, WotC set designers got in a bus and traveled west to stare at the Pacific Ocean. Weeks later, when the set was due to be sent to the printers and they still hadn't accomplished anything besides a lot of beach volleyball, someone panicked and said "What if Quirion Dryad got Master of the Pearl Trident bonuses?" and everyone slapped him high five for saving their jobs. The subtheme for Merfolk in this set appears to be "Cards that make Modern Merfolk players salivate" and even if there are only one or two cards in that subcategory, it should be enough to sell packs. If that's not an upgrade on "Kira, Great Glass-Spinner" I don't know what is. Also, there's a ton of debate over whether this is better. I do know that this is Modern and Legacy playable for sure and also that Merfolk are historically super garbagey in EDH. No, don't link me your Sygg, River Guide deck in the comments and tell me how well it does at the LGS. Unless you want to, that'd be cool, actually. I may be speaking from a place of failure having tried to make Sygg, River Cutthroat and ending up with a deck full of Rogues.

Speaking of Sygg, River Guide, the EDHREC page I just linked shows that while we can't play any of the Green Merfolk we're getting, blue Merfolk like Kopala, Warden of Waves and Merfolk support cards like Deeproot Waters might make an appearance. If you really want to go deep, maybe consider tweaking a Simic Merfolk like Prime Speaker Zegana whose EDHREC page I just linked to have a Merfolk theme. Zegana decks would give you access to new cards like Walker of the Wilds and you would be completely immune to the card Walk the Plank. I mean, your lands wouldn't if you used Walker of the Wilds. Walker makes your land into Walker of the Plank. Still, though. Who's going to play Walk the Plank in a format where Curtains' Call exists? Not this guy.

If you want to build around a new Legendary creature because that's what you do, take a look at this beauty. Some of the cards people are playing in Multani, Maro Sorcerer decks would likely port over to this new one, and similar cards like Overbeing of Myth have lists of associated cards on their EDHREC pages that can help you figure out what to correlate with Tishana. You could be drawing a lot of cards, especially if you get this going with Deadeye Navigator and some Merfolk. Happy building!

Now we come to the money cards - literally. Pirates have money. Specifically, Pirates have treasure. Treasure gives us a new card that I plan to try and use to kill people right away. Treasure is akin to the Gold mechanic from previous sets, and while this doesn't play that nicely with King Macar, the Gold-Cursed, this is still flavorful enough for that deck. You'll be making two kinds of tokens, but that doesn't mean you can't swim around in both like Scrooge McDuck.

Pirates are getting a bunch of new cards and are basically going from fringe EDH deck to real contender. The Pirates decks people are playing now, Ramirez DePietro and Skeleton Ship are both Dimir and now with the addition of scary Lady Pirate Admiral Beckett Brass, we have access to red cards, which is great. There are enough Pirates to make a Pirate deck already, so adding red and printing a ton more good Pirates could push Pirates from "fringe" to "better but still mostly goofy" or even beyond. Who cares if your deck is goofy? You get Pirates AND actual Pirate ships your Pirates can crew and ride around in. 12-year-old me jamming Kukemasa Pirates and Rishadan Brigand would faint if he saw the bounty Ixalan is giving us.

The subtheme for Pirates is treaure. Treasure is a mechanic that's designed to trick people into thinking they're playing a game of Dominion: Seaside. Did I miss a tribe? Did I neglect to talk about your favorite Tribal card in the set? Which decks do you think are most affected by the addition of new cards? Do you want to show me your Sygg, River Guide deck and defend its honor? Leave all of that in the comments section. Thanks for reading!