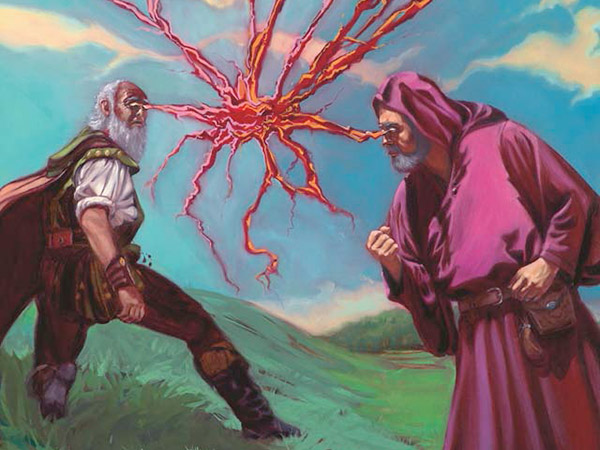 Welcome to Too-Specific Top 10, where if there isn’t a category to rank our pet card at the top of, we’ll just make one up! (Did you know that Bind is the only non-blue Stifle that cantrips?)

There are few things in Magic that can be as existentially terrifying as a blue mage with mana untapped.

But aren't we tired of them having all of the fun?

This week, let's take a dive into the less-expected options when it comes to countering spells. I'm not talking things like Nix and Laquatus's Disdain, however. I'm talking about Counterspells which are unexpected because there are no Islands on your quarter of the battlefield. I'm talking about being a mono-white deck that can play Control, and not just with Stax.

That's right, there are other colors that can counter target spell, although it does admittedly come with some caveats. Before we get into what the best non-blue Counterspells are, however, we first need to get into what makes a counter a counter.

There are a lot of cards in Magic: The Gathering that include the word "counter", even if you leave the blue ones out. Many of those are talking about +1/+1 counters or charge counters or even prey counters, however, which is obviously not what we're referring to when talking about Countermanding our opponents' plans. So what are we talking about?

According to the Comprehensive Rules:

"To counter a spell or ability means to cancel it, removing it from the stack. It doesn’t resolve and none of its effects occur. A countered spell is put into its owner’s graveyard."

While the rules are correct to point out that abilities can also counter spells in addition to spells, for me the concept of a "Counterspell" doesn't include Mystic Snake or even Ertai, Wizard Adept. It means a spell that can counter spells, which by its very nature means responding to them, whittling our choices down to only one of the card types in Magic.
Criteria: Instants that can counter a spell of some fashion and that do not contain the color blue in their color identity. As is tradition, all results are ordered by EDHREC score.

It's rare that I find myself asking the question "why would anyone play this?" Even last week while going over creatures that by their very nature don't do anything, I was right there on the same wavelength of deckbuilders that wanted to challenge themselves or throw in some nostalgia or just ensure they had a deck for lower power-level tables.

I legitimately had to look up what possible strategy there was for you to ever even consider putting Dash Hopes in a Commander deck.

The answer is... mostly Maralen of the Mornsong decks that can tutor for it if their opponent is at a low life total. Even in that situation, however, it seems pretty situational. Thinking on it for a while, however, I think I could see a spot for this in decks built around effects like Axis of Mortality. You might have to go for the full Repay in Kind to really make this worth it, however.

While Burnout is fairly limited, if you are in a combo deck that can only be stopped by counters, then it could be worth the inclusion. Or, it would be, if there weren't already two red "counter target Counterspell" cards available that only cost one mana. There is also the extra card to consider, except if you're in a combo deck you tend to be winning the turn you would need this, not biding your time until the next upkeep. Still, if you did need the third option for protection, it's there!

Speaking of one-mana red spells that can protect your combo, Guttural Response! I'm not sure how this fish was going to counter a spell exactly, but I for one am glad we never saw that particular version of Mystic Remora.

There's more to unpack with this card, as it's hybrid Gruul as opposed to just solidly red in the vein of Red Elemental Blast, but instead of diving into that I'd like to talk more about the weird flavor choices here. First of all, the flavor text references Wort, the Raidmother's "raiding bellow" as the force that is slicing this poor fish-Instant in half. We then see what looks to be a slice of lava with green slime at the bottom actually performing the slicing action in the art.

...Is Wort hawking a loogie to counter counterspells? Because I think Wort is spitting down counterspells, and if so, I think we need this more fully fleshed out in the fiction.

There's a lot of talk about the color pie out there, but all things considered I'm actually a bit surprised we haven't seen effects like this more often in black. There are a lot of restrictions black has been able to get around over the years with life loss, and it's actually very on-brand that Withering Boon only affects creatures.

All that said, I don't see many Excludes around my table, and I would be willing to bet the same is true of yours. No, the full story around Withering Boon's 917 inclusions is more terrific and complex.

Phage the Untouchable and Toshiro Umezawa account for a little more than a tenth of Withering Boon's inclusions, so I would still contend that it's a tad overplayed. That said, in those two decks, it has some really fun interactions. For Phage the Untouchable decks, a huge hurdle is just getting your commander into play without killing yourself. Withering Boon is the step one to that goal, allowing you to cast Phage, counter it, and then later return her from your graveyard to your hand. That is a rather roundabout way of doing things, however, so I much prefer the more direct route of Toshiro Umezawa, where this little bit of tech allows you to repeatedly recur Withering Boon every time you kill a creature. Neat trick, that.

While it's no Teferi's Protection, Rebuff the Wicked's flavor text really fleshes out the entire idea behind white instants that act as counterspells:

"I cannot teach you their brand of magic, but I can teach you how to defend against it."
- Tavalus, priest of Korlis

As far as actual play is concerned, however, Rebuff the Wicked has largely been outclassed by more-recent or -expensive white spells, although you'll still see it in low-to-the-ground Voltron decks like Isamaru, Hound of Konda.

Might I humbly suggest that this is also an excellent, cheap means of protecting your combo pieces in all those new Heliod, Sun-Crowned decks, however?

The quintessential example when it comes to white counterspells, I was recently surprised to find how many more there were when creating a mono-white deck on a budget. That most of them were actually more popular than Mana Tithe, as well, also came as a surprise to me. While the numbers on Force Spike aren't exactly blowing anyone away, there is something to be said for being able to counter a spell with only a single white mana open, which everyone is more likely to assume is a Swords to Plowshares waiting in the wings.

For as popular as Remand is, it actually is surprising that Lapse of Certainty doesn't see more play. The reason it doesn't, of course, is largely for the same reason that Cancel doesn't: It costs three mana. That said, the one mana tax for breaking the color pie is more than worth it to see the face of your opponent when you tell them to hang on a second, the mono-white deck has a response.

Dawn Charm probably gets cast for its first and second modes more often than not, but the beauty of charms is exactly that flexibility. If you've ever been able to save an entire table from a Jaya's Immolating Inferno for 37 with this card, then you know exactly what I'm talking about. Sure, you were just holding it to try to protect your Feather, the Redeemed, but they don't need to know that. You planned it all along, and that's the story!

In all seriousness, however, Dawn Charm should be seeing a lot more play in white decks of all kinds. There are a lot of decks that have an interest in protecting their commanders, Fogs are also very powerful, and the every once-in-a-while counter from the top rope can be absolutely devastating. While almost 3,000 decks is respectable, I actually think this number should be just a tad bit higher.

For those keeping score, it's probably not a surprise to see Pyroblast in the number two slot on this list. Honestly, this little red instant is actually better than a lot of the one-mana counterspell options in blue, being able to both take part in a counter-war while also giving you the ability to stop that player trying to annoy the table to death with their Rhystic Study at will.

Honestly, it's hard to imagine how there could even be a better option available in red, given the color pie restrictions...

Unless, of course, it was the same exact spell, but not as hard on the pocket book! Red Elemental Blast has been a staple even since before Commander existed, allowing red decks to play in blue's territory since the days of Alpha. The very fact that it's a counterspell in red and is under a dollar has sprung it up to the point where it's trending towards 10,000 inclusions, whereas its counterpart Blue Elemental Blast has only made it into a total of 527 decks. The ability to counter the counters is just absolutely paramount, not to mention the added flexibility of removing the problem permanents of the most popular color in Commander. Red Elemental Blast is just the best available option if you have game-winning spells to protect and you don't have access to blue, bar none.

There aren't actually that many more straight up and down counterspells that aren't blue, and whenever I have that nicety I like to just include the entire list:

Of these bottom-of-the-barrel options, I really do think Avoid Fate should have edged out Dash Hopes, but honestly both it and Rebuff the Wicked are probably budget options only in a world that contains spells like Heroic Intervention or even just Brave the Elements. As for the rest, Bind, Rust, and Illumination might need to see a tad more play given the fact that artifact decks are the most popular theme in EDH, but overall I don't think we'll see a limited counter like that see play unless we get a flexible printing in the vein of Red Elemental Blast or Dawn Charm.

In the spirit of hoping for an Artifact Elemental Blast (in Gruul, one would think?), what are your philosophical thoughts on how countermagic should be handled in Magic as a whole? Should blue have the corner on the market, or is it okay for other colors to be able to use counters that have steep stipulations?

And finally, what spicy non-blue counterspells have you been playing lately? Is Pyroblast getting it done in your combo deck? Are you mad that I didn't once mention Veil of Summer or other pseudo-counters?

Let us know in the comments, and we'll see you at the awkward counter we've set a game up on because all the tables are taken.