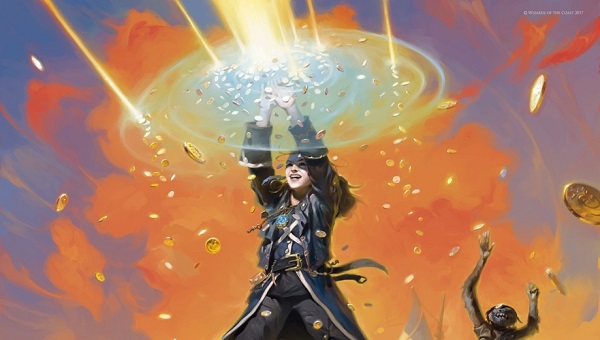 Welcome to Too-Specific Top 10, where if there isn’t a category to rank our pet card at the top of, we’ll just make one up! (Did you know that Out of Bounds is the only Counterspell your political allies can help pay for?)

The list of the top Counterspells in EDH has remained the same for quite some time, being essentially a tour through the most efficient or free interaction available - but is cheap really all there is to it? Should we be playing Force of Will to lose card advantage when we could be playing Dismiss to gain card advantage?

Our idea isn't too complicated this week; we're just exploring the space around inefficient counterspells. Let's get right to it, shall we?

Criteria: Instants that can counter a spell that cost more than three mana and do not have an alternate casting cost. As is tradition, all results are ordered by EDHREC score.

There's a long tradition of expensive Counterspells that let you cast another spell, but usually they do so as a means of stealing the spell you're countering, which is what makes Reinterpret a bit difficult to evaluate. On the one hand, it's almost entirely based on playing around your opponent. You don't know that they're going to cast something worth countering, you don't know what that spell will cost, and you might not even have a spell in your hand to cast off of this. On the other hand, you're in Izzet, so you've probably got instants to spare, meaning that you can cast those with your open mana if your opponent doesn't cast anything that's worth countering. This is also excellent for an instant-speed start to a Storm turn, making the Storm count equal to three for the cost of only one spell.

All in all, are there better options out there if you're in Izzet? Sure, but that's true of every counter on this list. You don't play expensive counterspells because they're good, you play them because they're more fun and thematic than your average Negate.

There are few things more fun for you and less fun for your opponent than countering their commander. One thing that does make that list, however, is stealing their commander, so have I got good news for you! Given that the average Control Magic costs five these days anyhow, Desertion is right on curve. Combine that with all the other huge, game-wrecking artifacts and creatures you can get with this, and it's bound to be a swing in your direction the majority of the time.

Just make sure you're playing enough instant-speed stuff that you don't look too suspicious holding up five mana.

8. Fuel for the Cause

Which brings us to the first counter I don't like on this list, Fuel for the Cause. Don't get me wrong, I know why people are playing it: they're in a counter deck of one sort or another, whether it be +1/+1, Superfriends, or something like Saga tribal. However, even there, there's no shortage of better Proliferate cards that you could be playing instead that are going to be a lot more flexible for you.

Just off the list is also Steady Progress, if you were looking for another Proliferate trigger stapled to an instant, but suffice it to say, there are more than enough Proliferate effects out there already that don't require you to hold up four mana.

You know what is worth paying some extra mana for, though? More mana! Plasm Capture is the perfect predecessor to a turn where you absolutely pop off. All you need is an extra two green mana and you're saving $35 on a Mana Drain!

Cryptic Command may have been the first big, modal Counterspell, but Insidious Will was the first to bring it to the masses. For one fewer blue pip, you can flexibly interact with any spell on the stack in pretty much any fashion you want, whether that spell belongs to you or to an opponent. In other words, if your deck wants to copy spells, then this is worth a look, as it will fill both a copy slot and a removal slot, all in one.

If you're still looking to save $30 on a Mana Drain, but don't have green mana, then fear not! Spell Swindle can also fill in, and it'll even let you keep the mana around for the long haul in the form of Treasures, which also means that if you're playing a deck that cares about either artifacts generally or Treasures specifically, then this has become kind of a must-include.

The original modal counter, Cryptic Command is still seeing a lot of play for a lot of different reasons. Being able to counter a spell while setting up an alpha strike would be good enough all on its own, but that's probably the least used combination on this card. Most often, what you're using this for is a simple four mana for two pieces of card advantage, whether that be drawing a card and bouncing a permanent, bouncing a permanent and countering a spell, or countering a spell and drawing a card.

What's really telling when it comes to just how good Cryptic Command is is when you start looking at the costs of the cards it's doing an impression of. Blink of an Eye and Into the Roil are also four mana (albeit with an option to cast for two), as is Dismiss, and Lost in the Mist actually costs you an extra mana to equal just one possible mode of this amazingly flexible spell. It's like yoga on the stack, I tell you!

Why would you pay less to do two things, when you could pay more to do all the things? There's no doubt that Sublime Epiphany can be a bit of a trap card, being six mana to do a whole bunch of things that you could do for just two mana. However, it's also more efficient, if you look carefully, because if you manage to cast it for all its modes, it's getting you ten mana and five cards worth of stuff!

This may be a bit pie-in-the-sky, admittedly, and holding up six mana can feel awful. That said, when someone inevitably casts a spell, even if it's just a piddly mana rock, there's no better feeling out there than resolving this for all the effects in the world.

Sublime Epiphany is hot on the heels of our most popular modal counterspell, Mystic Confluence. In fact, I wouldn't be surprised if it's actually overtaken the Confluence by the time this article is published, as the gap between the two as of this writing is only 631 decks.

That said, I'm not actually sure that the rapid gains are warranted. While there's no doubt that Sublime Epiphany is more exciting than Mystic Confluence, I'm not actually sure it's better. At least, not in every deck. Don't get me wrong, if you care about copying creatures, then Sublime Epiphany is probably the better inclusion. Likewise, people should be playing more effects that counter abilities. At one mana less, however, Mystic Confluence probably does more at the average table than Sublime Epiphany does at six. Even at its most mundane mode of "draw three cards at instant speed", you're pretty happy, and having to dig for answers is something that comes up in more or less every game. Combine that with just how powerful bouncing three problems is, or doing any combination of those two effects while also countering a spell, and I personally think we should actually be keeping this old standard at the top of the pile.

Except, it turns out, the pile is always reserved for the free spells. Or maybe even, the ramp spell that also counters spells, if you play your cards right. However you play it, Rewind will keep you casting spells, and that's what's important.

The obvious spells I was trying to write out of our "expensive" counterspell list with my criteria this week were the ultra-competitive free staples, Force of Will and Pact of Negation, but did you know there were other "free" counterspells out there? As I more thoroughly explored in my first Too-Specific Top 10, there was an entire set that focused on free spells, and counterspells were no exception. The entries from Mercadian Masques to the Force of Will rat-race? Foil and Thwart. Neither has ever seen very much play in any format, with the less-steep variants Daze and Gush taking all the limelight there, but I still think both have their places.

For instance, there are a ton of Landfall decks out in the world that would love the prospect of getting three Islands back to their hand with an Azusa down on the battlefield, a dream that Thwart can easily make come true while also countering someone's attempt to keep the lands deck under control. As for Foil, its alternate cost may seem a bit daunting, but it really isn't if you're in the mono-blue deck that's just drawing cards all day. In fact, where I have seen it is in combo decks attempting to draw their whole deck so that they have yet another free counterspell to work with while playing down their Laboratory Maniac effect for the win.

As for the cards just outside of our top ten:

Fairly new on the scene is a card doing a reasonable impression of Spell Swindle, Access Denied. While there's no doubt that most decks would rather have Treasure than Thopters, there are still a ton of token decks out there that would rather have evasive creatures, and even more artifact decks that would be just fine with having both. For the Azorius among us, might I present yet another great modal counterspell in the form of Ojutai's Command? Grabbing a utility creature back is huge, as is lifegain in the deck calling for it, and you've still got the almighty "draw a card" option on there. If there's one gripe, it's that it only counters creature spells, but honestly you're happy to let this just be a value engine with the option to counter someone's commander if the opportunity presents itself. Speaking of value, why settle for a tiny bit of card advantage when you can just draw a whole new grip with Overwhelming Intellect while countering someone's game-winning spell?

Finally, what are your favorite counterspells with upside? Modal counters? Spelljacks?

Let us know in the comments, and we'll see you at the table we moved to block the path to the other tables while our fellow playgroup was out grabbing pizza.