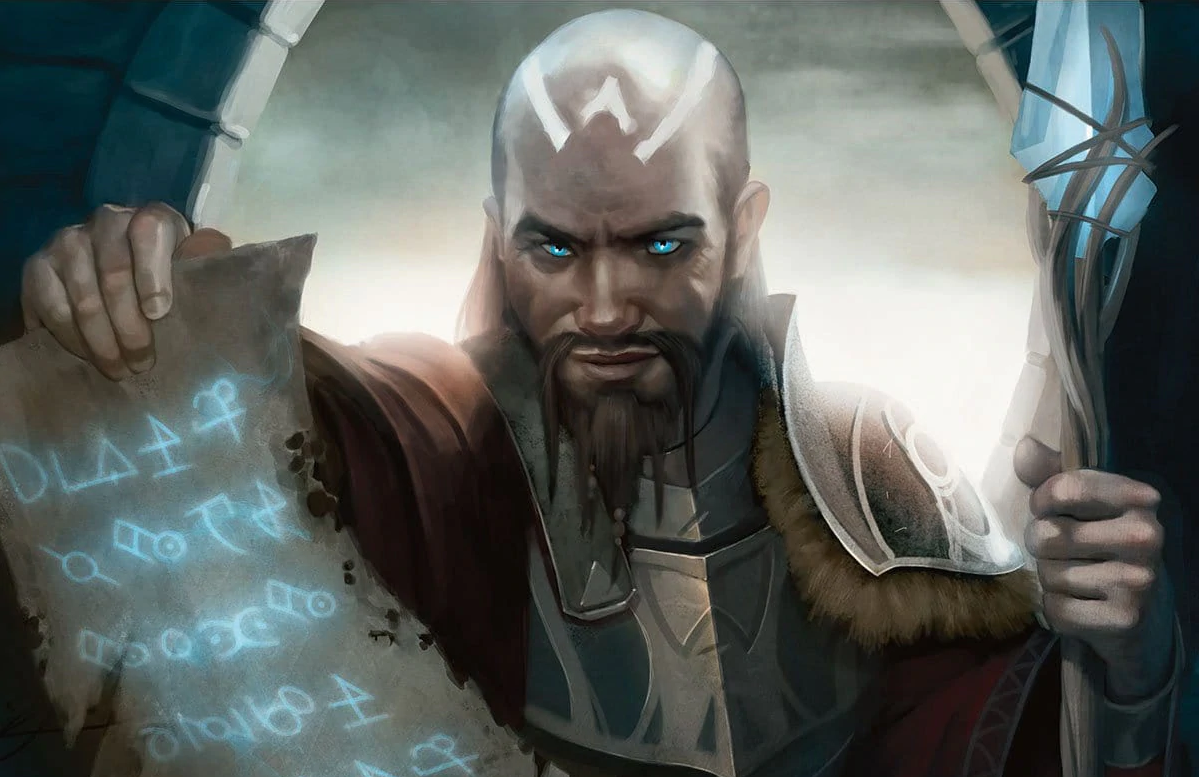 Born Free... As Free as the Untaps

Welcome to Too-Specific Top 10, where if there isn’t a category to rank our pet card at the top of, we’ll just make one up! (Did you know that Burst of Energy is the only white instant that can untap any permanent?)

Last week, we took a dive into the world of Street Fighter with a Blanka, Ferocious Friend Auras deck that could Storm off with a built-in Grapeshot. I also mentioned off-handedly that I was considering brewing Chun-Li, Countless Kicks, because who can't use more Solitaire in their life? But of course, being an abhorrent hipster of a brewer, I couldn't just make the "good" Chun-Li build when there were all those Arcane spells just sitting there, waiting to be used!

Even with the Arcane theme, though, the bare bones of the deck use a lot of the same tricks you're bound to see in just about any Chun-Li build, and that's because all Chun-Li builds will have the same problem: how do you get enough mana to put kick counters on all your favorite instants?

By untapping stuff, of course!

"But Doug," I hear you say, "Frantic Search and Burst of Energy don't net you any mana, and Psychic Puppetry is just bad!"

Touché on that last point, but as for the first two, I respectfully disagree.

With any land that taps for more than a single mana, you can actually net mana off of a Frantic Search. If you happen to have more than one double-mana land, then you can net a lot more! Similarly, a Gilded Lotus can be a mana-generating machine with the likes of Burst of Energy or even the sub-par Psychic Puppetry. Then, if you want to get real spicy, throw an Orvar, the All-Form in the 99 and watch the incidental infinite combos go off.

Now normally, a Dark Ritual-type move, such as casting a one-mana instant to net you two mana, wouldn't be that impactful in the long run, especially if it requires you to already have an expensive mana rock in play. However, with Chun-Li, you'll be able to do this every single time you attack, which will just get you all the more mana to cast the other instants you're 'kicking' in each combat step.

Combine that with the fact that they'll be able to ramp you into a bunch of Multikicker spells on the way, or just allow you to leave up all your mana for instants on other peoples' turns, and you've got what you might call an engine.

Which raises the question: which other spells can you do this with?

Criteria: Instants that can untap noncreature permanents. As is tradition, all results are ordered by EDHREC score.

As astute readers will see from my decklist, I'm not actually a huge fan of Reality Spasm in Chun-Li decks. At the low end, it's three mana to untap a single permanent, and if you do have a ton of mana, you want to spend it by playing either a huge Chun-Li or all the instants you exiled with your huge Chun-Li. Still, Reality Spasm is flexible enough that it can be great in a deck that's good at reducing costs, like Mizzix of the Izmagnus or Kaza, Roil Chaser.

I do see some data that I'd love to challenge on Reality Spasm's EDHREC page, however, and that's the 12% of people playing it in Orvar, the All-Form. In similar fashion to Chun-Li, three mana is too much to use this as a Twiddle, and if cast as a huge X spell, you still only get to copy one permanent with Orvar. Not exactly what you're looking for at any portion of the equation, especially when you could just play Twiddle instead.

You will not find a bigger proponent of Volcanic Offering than me, but Intellectual Offering just doesn't quite compare on the same level. Where Volcanic Offering Decimates four targets you don't own, Intellectual Offering has you casting a Secret Rendezvous and untapping all of someone's mana rocks and creatures. That would be all well and good in white, but there's just better draw and untap effects all over the place in blue. Combine that with the five-mana cost, and this just isn't something that even untap decks should really be interested in, Chun-Li included.

Dream's Grip, on the other hand, is everything that Chun-Li wants, and then some! Being able to untap something, tap a tall creature that's about to rock your world, or do both for two mana is just all the flexibility you could ever ask for in a deck that loves to Twiddle.

That's why I'm actually a bit confused as to why Twiddle shows up above Dream's Grip in this list. Sure, it's got the old-school name recognition, but it's also just strictly worse than Dream's Grip. Most decks that want one will just want both, but other than the marginally better price and the fact that folks know it by name, Twiddle just doesn't have anything else going for it if it comes down to a head-to-head decision. That's okay, though! Nostalgia and building out of your collection are bedrock motivations for EDH, and I like them more than just looking at cards through the lens of optimization.

Let's be clear: four mana is a ton for this effect. You'll have to be in the extreme late game to get more than one or two mana out of Turnabout. Even so, tapping out your opponent is absolutely huge, making sure that your Chun-Li gets through unscathed if you need it, restricting Counterspells down to just the free stuff, or just setting someone up for the alpha strike.

That said, it costs you nothing to get this under a Chun-Li early, and it will be absolutely killer in the late game, no matter which option you choose.

Unwind isn't that great in Chun-Li. Remember, you're casting all these instants in your combat step. Yeah, you could cast a one-mana spell and then counter it to get the untap, but then you're looking at netting even less mana.

All in all, for Chun-Li at least, you're probably better off just going for modal counters, like Supreme Will, or an Arcane Denial, that will draw you a bunch of cards by countering your own "free" instants.

There's a reason Unwind is here on the list, though. It isn't 'free' but it's as close as you can get without shelling out the cash for a Force of Will or Fierce Guardianship... unless you're happy with the odd Foil, I suppose.

Thankfully, no such problems exist with Snap! This might be the premiere staple of Chun-Li brews, as a spell that you'll be more than happy to cast each combat, mana-positive or not. That's especially true since it also allows you to get Chun-Li back in your hand to get more spells under her, or just to save her from a combat that isn't going to go well while still allowing you to cast all your instants off of her trigger. All in all, there's nothing you'd rather see in your opening hand, outside of the requisite three or four lands.

Alright, so everything I said about Unwind applies here as well, but shouldn't Unwind be here instead of Rewind? It's less mana, less mana-intensive, and is likely to net you the exact same amount of mana if you're looking to abuse some "big" lands. Is it just the name recognition as it was with Twiddle, or are people really that attached to being able to counter creatures that they'll wait an entire extra turn to get their counter online?

I'm sure just about everyone noticed that I included the infinite Dramatic Reversal/Isochron Scepter combo in the decklist (although I'm probably not playing enough mana rocks to actually pull it off), but honestly, more people should be running Reversal even if they don't want to actually play the combo. Untapping all of your nonland permanents at instant speed is a heck of a combat trick. Any deck that wants to untap creatures will love this, and artifact decks likely play enough artifact mana source that this is at the very least a ritual. It's flexible interaction. Who doesn't love that?

It wasn't even worth trying to hide which card was going to end up at the top of this list. Frantic Search is ubiquitous, and it's the first thing that leaps to people's minds when it comes to netting mana through untap effects, or just slinging spells at all. Three mana to look at two cards is already on-rate, except you don't actually have to pay the three mana at all. If you're looking to Storm off, then this thing is just free, if not adding you extra mana to the fire (in addition to "extra" cards).

For those of you who assumed there was some sort of color restriction in this list's criteria, let me assure that there was not, it's just that only blue is any good at untapping noncreature permanents! So, with that in mind, let's look at two more Top Ten lists!

Top 10 Instants That Can Untap Creatures

Lots of overlap in this list, but there is still a ton of creature-specific spells you can use to untap your hordes during combat (or just when you want to hit someone with another salvo of Heartless Hidetsugu).

That's it! Just the seven, even when you expand it into sorceries. Which really seems like a bit of a hole in design, honestly. Sure, this is a primary blue ability, but there's gotta be some overlap when it comes to specific permanents. Green untapping lands in addition to creatures seems reasonable, right? Red's flavor of overloading things against all reason would be justification to let it untap artifacts (and then probably destroy them). White untapping lands as a form of farming would actually be an excellent, flavorful ramp option. And, well, black should be able to do just about anything, so long as it costs life or creatures to do so.

Just a thought for all those Wizards designers in the comments. I see you!

This list is essentially all about the Urza's block mechanic of 'free' spells, for better or worse. It was a fun mechanic, but even at the time, it was considered fairly broken. My question is, should we be looking for more of this effect to be made, and if so, should it be blue?

Finally, what's your favorite untap effect? Are you brewing Chun-Li, and if so, what lands are you looking to use with these untap spells?

Let us know in the comments, and we'll see you at the florescent light table that just looks like constant light, but we know is actually turning on and off several dozen times a second.