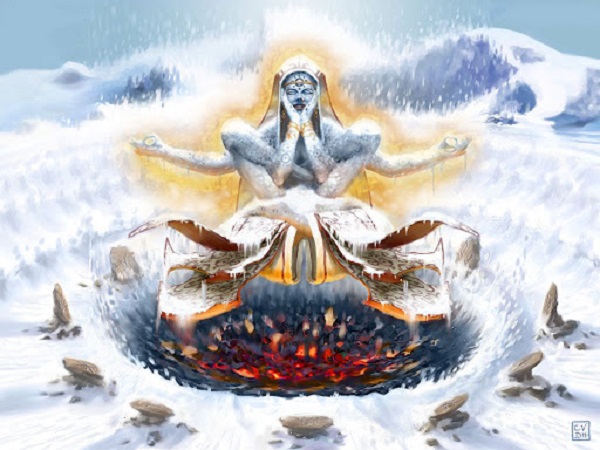 Welcome to Too-Specific Top 10, where if there isn’t a category to rank our pet card at the top of, we’ll just make one up! (Did you know that Braid of Fire is the only Cumulative Upkeep card that adds mana to your mana pool as its "cost"?)

Triggered abilities can feel like a bit of a payday, but what about the ones that actually give you Magic's only currency?

As previously mentioned, Braid of Fire can get you ever-increasing amounts of mana during each upkeep. Priest of Gix can pay for itself upon entering the battlefield. Cathodion can do the same when it shuffles off this mortal coil, while Radha, Heir to Keld is more than happy to fill up your mana pool any time you attack with her. There is no shortage of triggered abilities like these that can keep you rich in the mana department, but which of them is played the most?

Well, first off, this search string includes 127 lands, which seems like a lot to parse for probably only one that gives us mana due to a triggered ability. So let's save some time by being lazy and adding in our typical "nonland" rider right off the bat. Now what does that leave us?

Oh, right. Every mana-doubler in the game. Which are neat, don't get me wrong, but not exactly what I'm looking for here. Still, easily solvable, we'll just disqualify anything that triggers off a land-based effect. It's a bit ham-fisted, and it probably wrongly eliminates Lotus Cobra, but it still cleanly lets us get down to the crux of things for this week's criteria.

Criteria: Nonland cards that have a triggered ability that makes mana that aren't triggered by a land or actions you take with a land. As is tradition, all results are ordered by EDHREC score.

So, with that out of the way, and apologies to everyone's favorite Landfall Snake, let's take a look at the list!

Mostly known as "that card that says 'the Sliver deck wins'", Mana Echoes is a tribal powerhouse that can have you dropping creatures for days, so long as they share a common interest. The real key, however, is having a mana sink on the board that allows you to funnel these ludicrous amounts of mana into a win. With the likes of Sliver Overlord and Sliver Queen, that comes easily for Slivers, but there are a lot of other cards and commanders which can equal an instant win with Mana Echoes. Don't believe me? Just take a look at the combo page for it on Commander Spellbook!

Mana Echoes making the top ten wasn't exactly surprising, given that it is a combo powerhouse, but it coming in at number ten wasn't exactly a surprise either, as it cost upwards of $40 up until being reprinted in Double Masters. Still, seeing Frontier Siege a spot ahead of it does feel a bit odd. Don't get me wrong: a one-sided Eladamri's Vineyard for four mana isn't a terrible deal, and having your Dragons fight everything at the table is even better, but shouldn't the Dragon decks want a bunch of free mana as well?

In any case, Frontier Siege is a fine modal spell that fits a niche in the Dragon decks of the world. With that said, if you're playing this just for the two mana, as it looks like a quarter of Omnath, Locus of Mana and Kruphix, God of Horizons decks are, then I really do feel like you might be better off just taking a look through the four-mana mana rocks of the world. There's no shortage of them, after all, and a lot of them can make way more than two mana.

If you're a bit lower to the ground than your average Dragon deck, however, or even if you aren't, there's always Grand Warlord Radha. Getting a mana for each creature you attack with could have made for some absolutely lethal attack steps all on its own, but the fact that the mana sticks around for the rest of your turn is just plain lethal. Aggro decks can cast out their whole hand early, token decks can put lethal Fireballs on the stack, and you'll suddenly have the mana to get rid of those pesky blockers with instant-speed removal before they even get to declare themselves. And if that's not enough, Radha is kind of a mana dork all on her own, only better because she can tap as soon as she comes down!

Not being much of a Simic player, my initial thought on Plasm Capture was "do four-mana counterspells still do enough?" I then answered my own question by thinking about the two decks I play Rewind in. It turns out, when spells pay for themselves, they can absolutely cost four mana, so long as you're playing the kind of deck that operates well enough at instant speed that holding up four mana isn't suspicious.

There were a couple of themes that I expected to pop up during this top ten, but Dragons wasn't really one of them. Luckily, despite The Ur-Dragon decks being the most likely place to see it, Savage Ventmaw is more than strong enough to see play in just about any deck that wants an extra six mana every turn. I would caution the 37% of Hans Eriksson decks playing it, however. Aside from it killing your commander if you're not careful, you also won't get the six mana if Hans puts Savage Ventmaw on the board, as attackers have already been declared.

Any time I read Neheb, Dreadhorde Champion, it just makes me feel like the old Magic player I am. A 5/4 for four? With trample? Those are numbers we would have been ecstatic to see in green with a drawback 10 years ago, and now we have them in red with major upside. Rummage drawing whatever portions of your hand you want on combat damage could have been enough, but getting mana for discarding the cards that are going to get replaced anyhow? Everything about this card is pushed beyond belief, and yet players still think to themselves, "Well, yeah, but I think I'd rather have this ability on an attack trigger...."

The fourth of the much-missed "You Make the Card" series, Waste Not leaned much harder into the Jenny and Johnny design space than any of its predecessors did.

While it's fun to stack counters on Forgotten Ancient when anyone does anything, play lands from your graveyard with Crucible of Worlds, or blink huge ETB creatures for maximum value with Vanish into Memory, Waste Not is the only card designed by committee that cares exclusively about what your opponents are doing. Granted, most of the time you're forcing them to do it with your mass discard or wheel deck, but it was still quite the galaxy brain idea back in 2013.

Looking at that font size, you just know that "Zombie Minotaur Warrior" was one letter off of Neheb having to reclass. The most played of all three versions of Neheb, Neheb, the Eternal is not as physically pushed as Neheb, Dreadhorde Champion. Its mana ability, however, is not only more consistent, but also has a much higher ceiling and floor. It can start making you mana the turn that Neheb comes down, and can turn huge "and each player" board wipes, like Earthquake, into ramp spells as well, as you'll get triple the mana you put into them back (so long as you don't kill Neheb). In short, Neheb, the Eternal is a much more interesting commander than other versions, even if the War of the Spark version reads a little better at first.

Neheb's mana generation pales in comparison to the amounts you routinely see out of Black Market in your average Aristocrats deck gone wild, however. Stacking up a charge counter anytime a creature dies gets out of hand quickly, resulting in lethal Exsanguinates and Torment of Hailfires if the enchantment is allowed to stick around for any period of time. While many are seeing five mana as too much for a future investment in today's Commander, I think Black Market will always have a home for those obsessed with stacking value, and it's hard not to chuckle as you put your 20th counter on this thing.

If you're looking to keep things a bit more Spikish, however, then there's always the strictly better version of the already broken Counterspell, Mana Drain! As if countering any spell for a mere two mana wasn't good enough already, now it can ramp you as well! Mana Drain has been a powerhouse for a full generation now, and will continue to be so long into the future, as this mistake of a card will positively never be power creeped back to the norm. With that said, several reprintings of Mana Drain dropping this expensive spell into average player's laps has meant that a lot more tables have been seeing copies of it, so expect it to end up at the top of various lists for a long time to come!

While not technically part of our main list idea or criteria, I nonetheless felt that I needed to at least acknowledge the flood of Treasure cards taking over the format while we were on the subject of triggered abilities that make you mana. We may not all be fans of the flood of power they're bringing to things, but there's no question that it's here and it's here to stay (at least at the higher-powered tables).

I mentioned Lotus Cobra in the intro, but I'm still in a bit of shock as to not only how good this card is, but also how crazy it is that it was ever reprinted into a Standard set. Still, it's hard to complain about such a great Commander staple coming down from $20 to $5!

There is absolutely no question that, with some extra time in print, Birgi, God of Storytelling would have been on today's top ten, if not near the top of it. With that said, who's to say what side of the card would put it there?

I am at a loss as to how I've been playing Commander for longer than 10 years now and have never seen this card in play. It seems absolutely bonkers, and an upside versus Cryptolith Rites in a more aggro deck. What is this doing way down on page two of the Scryfall results? Speaking of which...

And finally, what is your favorite card to play that keeps the coffers full while things are in motion? Do you think that seeing more Mana Drains at tables is mostly a good thing, or a bad thing? Should we be seeing more crazy Priest of Gix/Cathodion loops than we currently are?

Let us know in the comments, and we'll see you at the automatically deploying table in the airport terminal. I assume that's a thing, right?