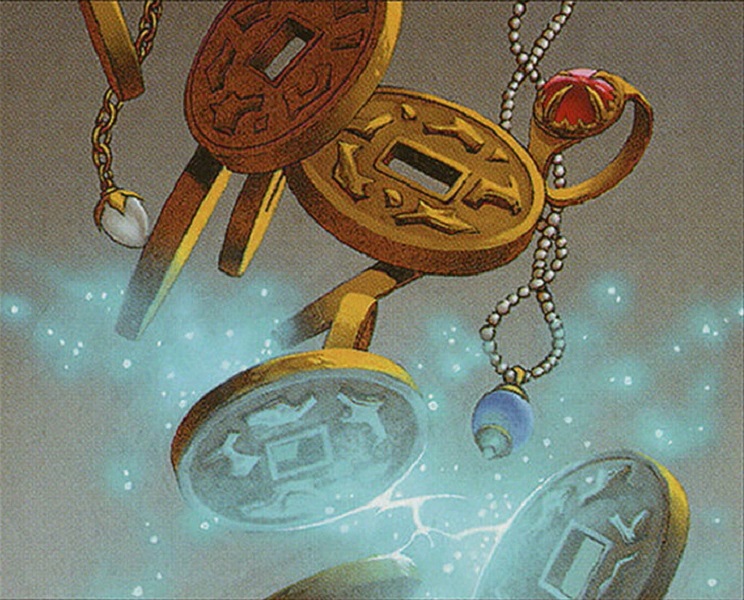 Welcome to Too-Specific Top 10, where if there isn’t a category to rank our pet card at the top of, we’ll just make one up! (Did you know that Enchanter's Bane is the only mono-red card that can deal damage equal to an enchantment's mana value?)

Last week, we got our first glimpse at the Magic-School-Trope plane of Strixhaven, with a cycle of five enemy-aligned Command cards. Unobtrusively included with two of those five cards was the end of an era: the elimination of CMC . 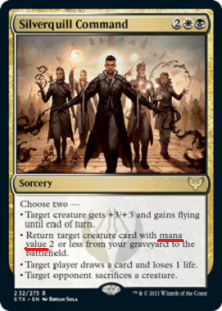 For those not familiar with the acronym, "converted mana cost" has quite the history. If you ask Gatherer today, then the first card to utilize the converted mana cost phrasing was the criminally underplayed Priest of Yawgmoth, out of Antiquities. As you'll notice, however, it actually references "casting cost", which was later errata'd to the now iconic "converted mana cost". Before that ever happened, however, another attempt was made to improve understanding, and the word "total" was added on in Tempest with the printing of Serene Offering. This change would be short-lived, however, with the long-lived converted mana cost arriving less than two years later in Sixth Edition. The card that would introduce CMC to the world for the first time, Tariff, might have gone down in history, except like almost every white removal spell, it wasn't as good as Swords to Plowshares.

Nonetheless, converted mana cost would stick with us for a long, long time. In all, it has been in use now for almost 22 years, and will just barely reach that milestone in April of this year when it is replaced with "mana value" in Strixhaven.

Which, all in all, means that it is worth being celebrated with a top ten, right?

Criteria: Cards that contain the words "Converted Mana Cost" in either their rules text or reminder text. As is tradition, all results are ordered by EDHREC score.

Despark has not only overtaken once-upon-a-time-Orzhov-staple Vindicate's numbers, it's almost doubled them. While it still has a little further to go to catch up with the more certain Utter End (24,161 inclusions) and Anguished Unmaking (32,656), I wouldn't be surprised to see it catch up. At the majority of power levels in Commander, the problem that needs to be answered will usually cost four mana or more, and brewers are always looking for an easy means to lower their deck's average mana value. Okay, that's gonna take some getting used to.

Rishkar's Expertise is a prime example of exactly the kind of card that, despite all of the power creep, is still 100% worth casting at six mana. Sure, you have to have a decent-sized creature on the board for it to be worthwhile, but that's often incidentally true in a game of Commander. Combine that with getting to cast another card out of your hand for free, and this thing just creates absolutely unfair advantages even if you're only drawing three or four cards, especially given that you can free-cast one of the cards you just drew. Where it gets really unfair, however, is when you've happened to craft a 12/12 recently.

Even in the early days of Commander, Isochron Scepter would illicit full groans and conspiratorial inquiries of "anyone got a counter?" from a table, and back then all we were doing was slapping a Fire // Ice or a Counterspell on it. All right, there were also some monsters Imprinting Silence, but that still doesn't compare to immediately going infinite with Dramatic Reversal.

If you're looking more to have fun than win immediately, however, my personal favorites are literally any of the Return to Ravnica block Charms, although especially the Rakdos, Boros, and Simic varieties.

Alas, you cannot stick the sorcery Reanimate onto your Isochron Scepter, but it turns out that getting any creature from any graveyard straight to the battlefield for the low, low cost of one mana is worth including in most decks anyhow. Sure, you might be taking 12 for that Blightsteel Colossus, but given that it's probably going to knock out a player or a board a turn, that seems like a deal you'd take anytime. Put simply, there's a reason that the entire strategy of putting big creatures into the graveyard to then get them out early is named after Reanimate. It's absurdly low-costed, and, combined with an early discard outlet, can win you games earlier than you have any right to be threatening a win.

Finale of Devastation is really the exact type of card I think designers were thinking of when making the change from "converted mana cost" to "mana value". Between six lines of rules text and an excellent single line of flavor text, there is no space wasted on this card, and you wonder whether it might have gone through some changes in playtesting to make room for it all. Although... maybe it's better that we didn't. I certainly can't think of how they could have pushed this particular card any harder, so those extra nine characters of space may honestly have gone toward nerfing this overpowered beast of a Finale.

Speaking of huge, unreasonably busted $20 green spells, Green Sun's Zenith! I say 'huge', but honestly I see this thing cast a lot more often early in the game to go get a utility creature with a mana value of only two or three. Given that it shuffles itself upon resolution, however, it's not uncommon to see this all-star a couple times in a game. Plus, just like Approach of the Second Sun, Green Sun's Zenith is a much bigger deal the second time around.

More and more these days, the adage of "if a spell costs X or more, and it doesn't essentially win you the game, then you probably shouldn't be playing it" is getting tossed around. As a lover of low-powered EDH play, I bristle a bit every time I hear someone say that, but the point is a bit moot when it comes to Bolas's Citadel. Weighing in at a mana value of only six, this legendary artifact can go pound for pound with just about any effect in the game, provided you've still got some life to sling around. While you can get stuck with a second land for the turn on top of your library, all too often when a Citadel hits the battlefield the table spends a good few minutes just watching the person who played it flip cards onto the battlefield, and then capping it all off by shuffling up to a combination of value, enter-the-battlefield effects, and a built-in Last-Ditch Effort.

While Wrath of God still holds the title of most popular white board wipe, Austere Command is a close second. For myself, if you asked me which I thought was better and you pushed past protests of "it depends on the circumstances", I would actually come down on Austere Command being the more solid choice. Sure, six mana is a lot, but you get a lot of options for that extra two mana. Being able to make a board wipe a bit more one-sided while also eliminating problematic enchantments or artifacts can be an absolute game-changer, or even be classified as "basically winning you the game" for, again, only six mana.

In contrast to the "basically winning the game" conversation, I actually rather enjoy the oft-semantic "strictly better" conversation that constantly arises in these days of power sprint. With that said, I know there will always be some that protest some extremely odd corner cases when it comes to how a probably worse card could be better than the obviously better card that does the same thing but more. However, I honestly couldn't even tell you what that corner case would be when it comes to Mana Drain being strictly better than Counterspell. Instead, it has always been a more economical conversation about whether or not you can afford a Mana Drain in the first place, although that conversation did thankfully get a little less intense with the recent reprinting in Commander Legends.

Astoundingly, this is only Sun Titan's second appearance on a Too-Specific Top 10 list, although it also took first when it came to "Mana Value"-Based White Recursion Effects. It also would have been second for last summer's Bargain Bin list of rares under $10, except I eliminated those cards that might be biased due to the Precon Effect, because the list would have otherwise been made up exclusively of cards that were first printed in the Commander precons. Still, it wouldn't surprise me if we see Sun Titan again someday soon, as a 19% inclusion rate in white decks is absolutely ludicrous. It is also absolutely deserved when it comes to this Titan of a card. mana-value-based permanent recursion is the height of flexibility and power when it comes to white, providing both card advantage and ramp in a color that has little of either. Combine that with a 6/6 body that both blocks and attacks in addition to looping things back and forth from the graveyard, and it's difficult to come up with reasons why you wouldn't want to play this thing in any deck that can.

In addition to a load of great cards that have utilized converted mana cost over the years, there have also been several mechanics to utilize the term to great effect. As such, I would be remiss not to shout out which are the most popular!

There are also a couple weird corner cases like hybrid generic mana and the just errata'd Cascade that will now need to be immediately errata'd again, but I don't think I'm laying out too hot a take when I say that it won't be long before we see this list added to, even if it might have a different title the next time we see it.

Finally, what are your favorite cards that utilize "mana value"? Have you been triggered by me using the new term throughout? Are you unsubscribing right now? Should I quit with this line of questioning while I'm behind?

Let us know in the comments, and we'll see you next to the conversion tables in the back of the chemistry lab. Why on earth they ever let us play Magic there is beyond me.