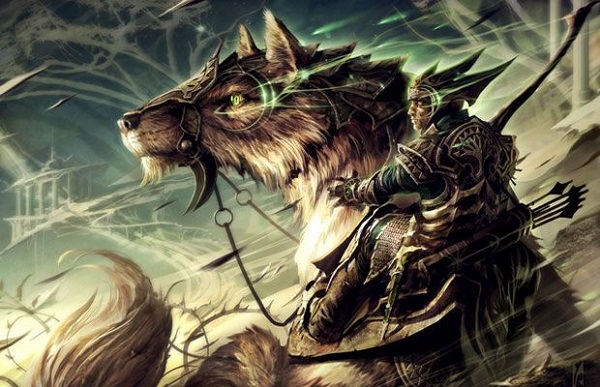 Criteria: Uncommon creatures within a given color identity that includes two or more colors. As is tradition, all results are ordered by EDHREC score.

If you're looking for even less context than that, well... let's just get to the top five!

Sunder Shaman isn't too complicated, but is still an absolute house that's worth some due consideration of Gruul. In this packed #5 slot, however, Lore Drakkis might be my favorite. There are only two other Mutate creatures available in Izzet, but you could do a lot worst than a Snapcaster Mage in your command zone that will also be able to be stapled onto a huge evasive creature to make commander damage wins happen out of nowhere. Speaking of value, Nyx Weaver lets you self-mill every turn for Golgari graveyard shenanigans, and can be easily traded in for that card you need at instant speed. It's tempting to think that Murderous Redcap might be the most lethal of the bunch, but there's not an infinite Persist combo available at common in Rakdos that I can find. Fans will just have to settle for repeatable damage to players in the most aggressive colors in Magic instead. Heartbreaking, I'm sure.

The Shard choices only appear to be getting worse as we go further up the chain, although there's something to be said for the sheer size of Nacatl Hunt-Pride paired with its flexible tap abilities and vigilance. The on-demand removal of Giant Ambush Beetle and Esper Battlemage also seems like they could make for some crucial moments, but overall we're probably better off waiting a bit longer to see what other three color options might be available.

There are more than a couple options here in the #4 slot that folks have probably wished they could have in the command zone before, chief among them Winding Constrictor and its ability to helm weird counter tribal in a fashion we've never quite gotten in regular Commander. For those that would rather Pillowfort up a bit, there's also Wall of Denial, but the real powerhouses in this set are probably the cards you already recognize from their time in Standard and beyond: Risen Reef and Bloodbraid Elf. It's certainly harder to construct a Cascade combo shell in Pauper than it would be otherwise, but given that you only have to worry about converted mana costs of three and less with Bloodbraid Elf in the command zone it's certainly doable. As for Risen Reef, you're essentially looking at Chulane, Teller of Tales in a tribe that not only has a plethora of options at common, but is also more than able to make even more mana than you'll already be getting from Reef itself, while also having a bunch of Landfall options to abuse.

Gloryscale Viashino provides yet another excellent Voltron option while also giving you an excuse to build multicolor tribal, while Thunderscape Battlemage is yet another expensive card advantage machine.

Many brewers first approach upon finding Pauper EDH is to look at the various Guildmages from the various Ravnica sets over the years, and it's not a bad first reaction. For the Orzhov lovers, Vizkopa Guildmage makes a downright lethal lifegain commander, and Nivix Guildmage might be even better if you can find the mana to get him going in Izzet. Speaking of instant wins, Juniper Order Ranger combos with Kitchen Finks if you're looking for another way to do that, or just makes sure your whole board remains huge at all times. Ninjas are even scarcer than Slivers, but the ones that are available are all surprisingly excellent even before you start drawing cards off of them. Just make sure you keep in mind that Ingenious Infiltrator can't Ninjitsu from the command zone like Yuriko, the Tiger's Shadow does!

Probably the best battlemage we've seen yet, Jund Battlemage can cheaply provide tokens or slowly ping a player to death despite a stalled board. Bant Battlemage probably isn't as good, but there is definitely something to be said for on-demand evasion.

I've heard many a lament that Soulherder isn't available as a commander, so here's your opportunity to blink all day and stack the counters high! On the other hand, Harmonic Sliver has always been an undeniable powerhouse, even if it would be kind of a bland build-around. The most exciting build-around just might be having a Helm of Awakening in the command zone for your artifact deck, however, and Herald of Kozilek does a decent impression.

The real story of the #3 slot is the overwhelming amount of Aristocrats commanders, though. Just be sure you have the right copy of Corpse Knight, and that you're not accidentally treating it like a 2/3!

Finally, some real contenders out of the Shards! If you're looking for all aggro and no messing around, then Woolly Thoctar has you covered. Similarly, Aerie Mystics not only gives you an extra color over Crystalline Sliver, but also expands your creature base out from slivers and changelings to every common creature across Bant. Sludge Strider puts every artifact commander we've seen so far to shame, allowing for a sort of hyper-Extort for all of your artifacts either entering or leaving the battlefield. Compared to all that, Grixis Battlemage seems a tad underwhelming, but having the option to loot or get aggressive on command is some great flexibility, not to mention that the "target creature can't block this turn" can be an amazing political tool.

Our first Wedge contender is unsurprisingly a Battlemage, from the vaults of Planar Chaos, where color pies have no meaning! Ana Battlemage is outrageously expensive, but also packs a ton of power if you can manage to cast it for its full seven mana kicker cost. Having the discard be only a single target player is unfortunate, but will probably also empty out a player's hand entirely at least once in a game, not to mention doing some serious damage while affecting combat with its tap ability.

Aristocrats remains alive and well in the format, with possibly its best commander sharing the #1 slot with our other contenders: Cruel Celebrant. You won't get much off of the planeswalker side of things in a Pauper environment, but having access to both white and black will do a lot more for you than trying to go straight black with Zulaport Cutthroat. Given the amount of sacrifice effects available at common, however, Mayhem Devil might just be an even better option, especially given its 3/3 for three body. Our Aristocrats options are put to shame by the other contenders, however, with Satyr Enchanter letting you have an Enchantress in the command zone and Savage Ventmaw bringing you six extra mana every combat step (along with being an absolute beater in the air).

Sprouting Thrinax might not be Korvold, Fae-Cursed King, but building a deck around an efficient body that gives you three tokens on death isn't exactly going to be difficult, either. As for Skyward Eye Prophets, it may seem terrible when compared to just playing Risen Reef or Tatyova, Benthic Druid, but having access to white is pretty amazing, not to mention Bant being the three colors that have a plethora of untap effects. Finally, Sedraxis Specter is your nightmarish pal if you're really looking to make sure the table has reason enough to kill you, but crucially comes back for a second round with Unearth when people manage to do something about it.

Not to end on a rough note, but when your best option out of every Wedge is Mardu Roughrider, that's just kind of how things are. That is sort of the uniqueness of the Pauper EDH format, however. Big color combinations are hard to come by, and the power you get from them is in the card pools they open, rather than the inherent power of your command zone. That said, Bear's Companion giving you a big old token every time you play it isn't exactly the worst starting point.

Firstly, there are three different five-color commanders available in the format if you want to try and tackle things across the whole spectrum of WUBRG:

The choices here all more or less boil down to what version of five-color goodstuff you're going for. For just four mana, Transguild Courier can turn on various effects that care about colors of creatures. Fusion Elemental can easily kill with commander damage, or be used as the setup for spells that care about big power and toughness. I think the best all around, however, is Sphinx of the Guildpact, as it both comes with evasion and protects itself, while still having a beefy enough 5/5 body.

Finally, we've done a lot over the last couple weeks, but I would be remiss if I didn't throw our resident uncommon commander specialist a nod by giving you guys a list of the best uncommon multicolor actual commanders as they currently stand:

One thing I suggest if you do take the plunge on Pauper EDH is to keep a "legit" commander in the side of your deckbox, so that if you want to play your Pauper deck in a lower power pod you can do so. Although I must say that generally if you ask whether you can use your Pauper commander folks don't generally mind.

And since we're on the subject, I might as well throw out my first-ever Pauper EDH build as well, the aforementioned Wood Sage-led Persistent Petitioners! I've built quite a few since this one, but this continues to be my pride and joy, despite having to share the Persistent Petitioners with my Alexander Clamilton build. I've only ever had to pull out a "real" commander for the deck once, as most people chuckle when they see Wood Sage. I keep a Tatyova, Benthic Druid at the ready anyhow, though.

Hopefully folks enjoyed this look at the top uncommon creatures from a different perspective than they may be used to, because we're gonna do it again one more time next week with the monocolor creatures! In the meantime, this is the first time we've ever split a top ten into parts here on Too-Specific Top 10, and as much as I enjoyed the extra depth we got to go into by looking at every single creature across the color combinations, I'm sure that many clicked over last week with some disappointment that they didn't actually get to see the best cards.

With that in mind:

And finally, did any of the top ten reach out to you as something you could see yourself building around?

Let us know in the comments, and we'll see you at the other common white folding table. You know the one.