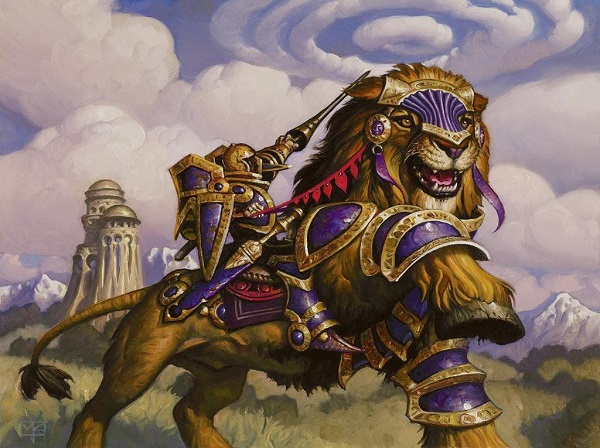 (Knight of the White Orchid | Art by Mark Zug)

The Rain in Spain

Welcome to Too-Specific Top 10, where if there isn’t a category to rank our pet card at the top of, we’ll just make one up! (Did you know that Last Stand is the only five-color spell that can gain you life?)

In the last few weeks, we've been racing through the cards that care about a specific basic land type. This time around we're looking at cards that care about Plains, and of course immediately eliminating all of the ones you're thinking about right now. With that in mind, here's a quick Top 10 of nonland cards that search for Plains specifically:

Okay, admittedly, I couldn't have named Endless Horizons off of the top of my head, but otherwise that's a pretty mundane list of exactly the cards you'd expect. It's also not a bad endorsement of how Wizards of the Coast has been trying to fix white's problems in Commander over the last decade. Sure, outside of Boreas Charger, very little of it is actual ramp, but a lot of it can certainly be used as card advantage under the right circumstances, and there's also something to be said for consistently hitting land drops as a game drags on.

Outside of the "search for a Plains" category, however, I knew that I would be hard-pressed to name the most popular cards that care about Plains specifically, which means we need to get a bit broader here on Too-Specific Top 10, and include lands for the first time in this cycle.

Top 10 Cards That Care About Plains

Criteria: Cards that either count or specify "all Plains", have an effect that includes controlling (only) a Plains as a prerequisite, turns lands into Plains, or that otherwise trigger when a Plains is tapped or enters the battlefield. As is tradition, all results are ordered by how many decks they are included in on EDHREC.

Sorry, Nimbus Maze. We had to get really specifically broad to make sure you didn't end up on the list here.

We begin with the least powerful of the old Judgment cycle of Incarnations, which each give you an effect if they're in your graveyard and you control a basic land type of their specific color. Valor nonetheless squeaks into the top 10 due to white being the color that cares least about its basic land type. Don't get me wrong, giving all of your creatures first strike isn't worthless, but it's also not nearly as good as trample, flying, or haste, either. Still, it does make me want to go all-in on an Orzhov deathtouch deck...

Idyllic Grange really cares about whether or not you're truly playing mono-white, which I, for one, appreciate. No, the stakes aren't that high here. The reward just lets you play a mono-color land untapped (exactly like a Plains would already be) and give one of your creatures a +1/+1 counter. Still, you could do worse when it comes to mono-white....

Celestial Dawn might just be the weirdest mana-fixer ever. All of your cards become white, then all of your mana becomes Plains, and stuff that would cost mana other than white now costs white. That's one way to fix your mana, I suppose. Sen Triplets players, you know you're primarily responsible for this card's popularity.

Our newest set has brewed up some excitement, although I wouldn't have featured this particular castle into that hype myself. Still, I suppose if I'm evaluating it, the obvious thing to compare it to is Vitu-Ghazi the City Tree, and it does actually compare rather favorably there, and doesn't necessitate you having access to green.

This little Elf Druid has managed to show up in each of the three land-specific articles for Naya colors, making it the first card to show up on three different lists in Too-Specific Top 10! With that in mind, I won't bore you too much with the details. Keeper is a mana-doubler that might not end up being fully symmetrical for your opponents, although in all likelihood at least a couple people at your table are going to get some extra mana off of this guy.

Hey, let's make a creature huge and give it evasion! I'm not seeing a downside here, and I'm fairly sure it's because there isn't one! Those of you that are playing Empyrial Armor in mono- or dual-colored decks, you might take another look at this one.

I feel like this card is all too often forgotten when it comes to both mono-white decks and Soldier decks alike. Granted, some of that lack of play is deserved, as Kjeldoran Outpost does slow you down a turn by sacrificing a land in a color that isn't known for being able to replace its lands very well. Still, if you are one of those token folks who is thinking about Castle Ardenvale or Vitu-Ghazi the City Tree, this is certainly a cheaper way to make some 1/1s.

It's worth noting that this slot would have been taken up by Duergar Hedge-Mage if the criteria hadn't been tweaked to only allow cards that care about Plains alone, instead of multiple types of basic lands. That said, Karoo was a namesake for the Ravnica bounce lands for a reason. Having the option to get another virtual land drop is a big deal in general, but it's an even bigger deal when it comes to mono-white's lack of card draw.

Seven mana is a lot of mana. If you're going to play a card that costs seven, it should really do a lot towards the goal of winning you the game...

...and Emeria Shepherd does just that. Bringing a permanent from your graveyard to the battlefield every turn is absolutely nuts, and is definitely exactly the kind of thing that will win you the game outright if the table doesn't deal with it.

Speaking of returning things from your graveyard to the battlefield every turn, what if you didn't have to actually pay the seven mana to do it, and instead could just own it? If ever there was a land option that was worth it entering the battlefield tapped, Emeria, the Sky Ruin is it.

There are a couple of different genres of honorable mentions this time around, so we'll split them up accordingly.

Under previous versions of our criteria we used for other basic lands, some of these would have qualified. As such, it only seemed right to give these alternate-cost spells a bit of the limelight. We've talked about Abolish on the first list of this series (play it, it's really good; it's certainly better than your standard Disenchant). Massacre might be one of those color hate spells you'd actually play if it weren't for the sorcery speed. As for Sivvi's Valor, it's pretty narrow, although I do think it's worth an include for anyone out there giving Tajic, Legion's Edge a whirl.

Those of you who caught the first list in this basic land series will recall my affinity for land hate, and how it can be used with Swamps to finish off an entire table. It's a little bit more difficult to set up with Plains, but if you can manage it with some mass Mind Bend shenanigans, the hate is certainly there to make it worth your while. You might be thinking that that's a lot of hoops to jump through for minimal payoff, and you're right. However, you'd be surprised how far some of us Johnny/Jenny types will go for a bit of a laugh.

While Quarry Colossus doesn't actually have the Sweep keyword present on the more Arcane spells of Kamigawa block, all of these would technically have met the criteria we set out, but just weren't quite good enough to make the list. This is fairly understandable; you have to go pretty deep into the mono-white Landfall strategy before you start returning your Plains to your hand en masse. Quarry Colossus is more interesting because of how good he used to be at removing commanders in the days of the tuck rule. He's probably still worth it in a more budget blink deck, but overall the remains of this list more tell us just how little white cares about its basic land type when compared to the other colors we've already explored.

Finally, what cards did I miss? Is there some secret Plains tech that didn't make our specific criteria?

Let us know in the comments, and we'll see you at the outdoor table, where hopefully the wind won't come sweeping down the plains....