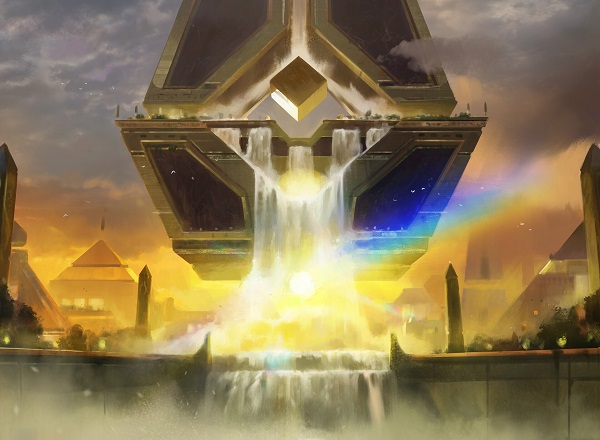 Welcome to Too-Specific Top 10, where if there isn’t a category to rank our pet card at the top of, we’ll just make one up! (Did you know that Cascading Cataracts is the only land that is able to add WUBRG that does not have the WUBRG mana symbols on it?)

I've had users suggest Top 10s to me before, but never has the idea come together quite so succinctly as it did in last week's article comments:

Last week we deviated from the formula a bit and did seven total Top 10 lists, culminating in 61 cards to create the meat and potatoes of a janky Evolving Door deck.

However, a deck is more than just spells. Without lands we'd all be lost, and with the insane mana requirements of the above deck, we're going to have our work cut out for us.

So, let's see what we can do to find the lands that are going to do the most work for us.

Criteria: Cards that can be immediately played as lands that either can add one mana of any color or all five colors at once, without any restrictions other than commander color identity (because in this case, we have all five colors!). As is tradition, all results are ordered by EDHREC score.

As an old Masques block nostalgia-head, I love Tarnished Citadel. As a mostly low- and mid-power player, however, I've never actually shelled out the $25 to grab one for Commander, which is probably true of most folks, because as much as it's a great discount option for City of Brass, it's actually more expensive. This means that, unless you have one sitting in a box from way back when, you're unlikely to seek it out unless you specifically have a deck that requires both a lot of colorless mana and a lot of colors.

I guess what I'm really trying to say is that if there was ever an obscure old rare that needed to be shifted down in rarity and printed into the ground, this is it. This would've been an amazing draft uncommon for either Commander Legends: Battle for Baldur's Gate or Double Masters. It would also be the same for just about any other set.

Speaking of common mana-fixers for Limited, it's Gateway Plaza! Although maybe it's not just for Limited, given that there are only about 7,000 Gates decks in the database, and this has double that number of inclusions. In other words, this is exactly what I'd like Tarnished Citadel to become: a budget mana-fixer for color-intensive decks. The real question is, if both cost a quarter, which would see more play: the flexible-yet-possibly-ultra-punishing City of Brass, or the Transguild Promenade that happens to be a Gate?

Those not in the know may be surprised to find out that the top commander utilizing Cascading Cataracts isn't five-color at all:

57% of all Noyan Dar decks play Cascading Cataracts, essentially just for its indestructibility. While you could spread Noyan's counters around, most Noyan players prefer to instead find a hexproof or indestructible land and stack all their counters on it. Since there aren't a huge number of hard-to-kill lands, and Cascading Cataracts neatly sidesteps color identity regulations, it's the perfect addition to the deck.

Excluding those 473 decks, however, most of the almost 17,000 decks are simply using Cataracts for exactly what our five-color build will be using it for: fixing all of the mana.

My favorite part about Forbidden Orchard is just how often its 'downside' can actually be used to a deck's advantage. For instance, Grismold, Toralf, God of Fury, and Phelddagrif are prominent decks that are often already built around giving creatures to your opponents, meaning that you can have a land that gives you all of your colors and helps your gameplan along. Add decks that actively kill all your opponents' creatures every turn, like Toxrill, the Corrosive, and there's a fair amount of demand for this even in decks that don't actually need that much mana-fixing.

However, when we look over the majority of these 38,000 inclusions, they're from mana-intensive competitive and high-power EDH decks that just want perfect mana, no matter the drawback.

Opal Palace, on the other hand, exists solidly in the casual space. Adding any color of mana does make it technically a mana-fixer, but since you don't net any mana when you do so, most more powerful decks are looking elsewhere. However, with the mana-fixing also adding +1/+1 counters to your commander, any deck interested in a large commander or +1/+1 counters can usually find an extra land slot for this. In other words, while this does technically qualify for our list, it's not really going to be much of a boon for our Evolving Door deck most of the time.

We'll be happy to see City of Brass in just about any opening hand. While it's going to ping us to death over the long run, we're all gonna die sometime anyhow, so we might as well do it with perfect mana! We might be the only Jank deck in the world running this $20 death sentence.

You know what, why not run a second one for $40 more? Mana Confluence is the technically superior City of Brass, only harming you when you use its ability, as opposed to when some outside source taps it for you. As with City and Forbidden Orchard, its usual inclusion is in the high-powered decks that need perfect mana all the time, so we do feel a little out of sorts here. Still, there's nothing wrong with a good mana base, right? *Stares at life total nervously*

With a solid return to the casual side of things, Path of Ancestry is a 25-cent card that enters the battlefield tapped. It then allows you to scry for any creature that shares a creature type with your commander you cast with the any color of mana it provides, meaning we'll have one more means of digging for our Evolving Door when we're casting Jegantha or our Changelings.

In other words, just like every other tribal deck that's not in too much of a rush, we love this.

We're less happy with Exotic Orchard, but not by much. The average table will still give us access to most colors in any random game, making it probably better than your average dual in most situations. Combine that with the solidly casual pricetag, and just like 30% of brewers, we're happy to see this card.

If you want the big guns, you've gotta go to the top. The #2 card in all of Commander is your best option for perfect mana at any power level, and as a result is rapidly shooting towards a million inclusions (a mark Sol Ring just surpassed this month). Well, here's one more!

Those keeping track will know we have a few more Top 10s to go to finish off our decklist, but let's take a small break and talk about some of the corner cases I weeded out of our main Top 10:

Cavern of Souls might've been an okay inclusion in our Evolving Door brew some of the time, but also would've been a constant dead weight when it came to specifics. Choosing Dragons as a matter of course would be the right idea if you were playing the numbers, but all too often you'd probably be forced into choosing a smaller percentage hit early, which would create feel-bads for later. Easier to just write all the "choose a creature type" lands out of our criteria and play it safe.

In the same vein, Gemstone Caverns would have been halfway up this list if it had been included, but a slow, five-color jank deck is not the place to try and play the cEDH gambling on a monster opening hand card. Lastly, Lotus Field is useful in a lot of mana-intensive decks, but we officially crossed the threshold into "I don't need three mana of one color, I just need all the colors" territory, making it an its reserved list compatriot solidly out of contention.

Now, about those other 28 lands we need, we're going to make 8 of them basic lands, just to stick with our "make the entire deck with top ten lists" challenge, which means that I owe you two more lists!

Our deck already wants a lot of different things, but more specifically, we have a Goblin Engineer and a Breya looking for artifacts to sacrifice, and an Evolving Door that could fetch game-changing Changelings if we just had some zero-color creatures, so, with that in mind, how about we get the most popular versions of both artifact and creature lands that can also fix our mana?

That helps us with our artifact line when we delve into that part of our toolbox, but an even more likely line once we get to searching for four-color creatures is attempting to abuse Omnath, Locus of Creation to help us out somewhat with our mana-intensive build, and the easiest way to abuse a Landfall creature is obviously fetches. However, we've already spent enough on this janky deck's mana base, and there's also the long game to think of, so let's see if we can't make things a little more interesting:

Criteria: Cards under a dollar that are either lands that enter untapped or two-color mana-ability artifacts that either search for lands without a mana activation cost to put on the battlefield, or return a land to your hand.

Alright! Two more Niv-Mizzet Reborn hits that will help us out, and a ton of fetches to keep that Landfall coming!

That brings us to the final decklist.

It will surprise no one that with the addition of 20 or so lands that effectively enter tapped, we have become no less of a pile of jank. Let the battlecruiser commence!

When Command Tower was printed just over a decade ago, it was contentious in the then much smaller EDH community. Being the first card that referenced the command zone, many foresaw the coming of things like Eminence and Partner, while others were averse to the entire idea of Wizards designing around "Commander". 11 years later, much has changed, and the format has flourished, probably in large part due to the Commander precons.

Which leads me to this question:

Let us know in the comments, and we'll see you at the round table that can fit any number of players!