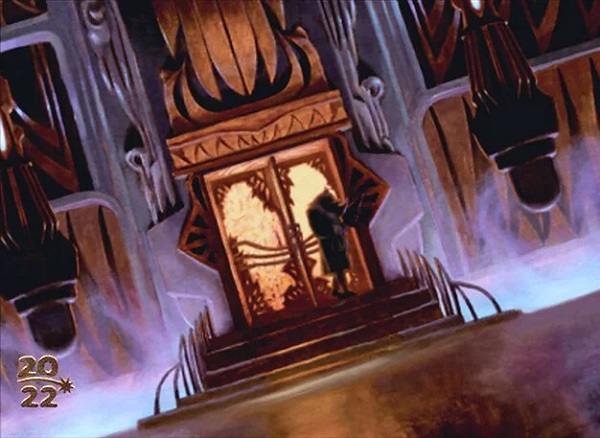 Welcome to Too-Specific Top 10, where if there isn’t a category to rank our pet card at the top of, we’ll just make one up! (Did you know that Evolving Door is the only Birthing Pod variant to care about number of colors?)

No time for an intro, we've gotta get straight to concept and all of the lists!

Can We Build a Deck Entirely with Top 10 Lists?

Well, maybe not entirely. We'll want to start out with a card to build around, and I think this card totally qualifies:

Now we just need to flesh things out a bit, and if we're going to do it all through Top 10 lists, then we're going to have to keep things fairly even. Let's therefore put our land count at 38. That puts us at 39 cards total so far, with 61 left to fill, including our commander. That means we're going to need six Top 10 lists to fill out the rest of the 99, which, if we're being honest, is probably barely above the average of how many Top 10s I include in each of my weekly Top 10 articles, so this should be child's play.

Let's get started at the top and discover the end goal for these crazy Evolving Door chains!

Criteria: Five-color creatures. As is tradition, all results are ordered by EDHREC score.

Since Evolving Door cares about colors, that seems like a great way to pick our Top 10 lists for this deck! Obviously, our prime target to score directly onto the battlefield here is Progenitus. That's our target, that's our payoff, it's just too good and too fun not to do.

However, the whole deck can't be "find Evolving Door, do Evolving Door things for four turns, hope Progenitus has haste once you finally get to it", can it? Everything else on this list is screaming tribal, and there are a ton of payoffs if we go that direction. Since we're including every single card on each of these lists into the 99, we've now made a (multi-)tribal bed that we have to lay in.

Which is fine! I'd normally say the next step is to get a bit more specific, but I've looked ahead a bit at the four-color stuff, and given that there are only 11 four-color cards in the entire history of Magic, we have to take what we can get.

Criteria: Four-color cards. As is tradition, all results are ordered by EDHREC score.

So these are all of the four-color cards in Magic, with the exception of Glint-Eye Nephilim. The good news? There are a ton of usable, toolbox-y targets we can search up with Evolving Door that will have an immediate effect on the battlefield. The bad news? None of them are Slivers, Dragons, or Scarecrows.

Let's take our lumps when it comes to the tiny card pool that is four-color, and see if we can't make up some ground further down the line.

Alright, so far what we have is an extremely unfocused, highly color-intensive, goodstuff build. So to break that mold a bit, now that we have a slightly deeper card pool when we move to three-color cards, let's take a look at some of our tribal options. Let's see... nope, no Slivers... or Scarecrows... or even choose your own adventure cards.

Well, that leaves us with a pretty clear direction for us to make even more specific now, doesn't it?

Criteria: Three-color cards that either are Dragons or reference Dragons in a non-nomenclature capacity. As is tradition, all results are ordered by EDHREC score.

The choice to include noncreature cards in our color chain that only cares about creatures will be contentious, but I just couldn't resist the possibility of getting to Sarkhan Unbroken's ultimate. Shame about Arcades, the Strategist, though. We'll have to see if we can make that inclusion feel a little less bad as we move through our remaining color lists.

For those of you that might be wondering if this Top 10 pile was going to win any high-powered games of EDH, I'd like to take this moment to say that that will certainly not be the case. At this point, we are solidly looking at a decision between being just another Dragon deck or doubling down on a smorgasbord of various creature types.

Longtime readers know that I am not one to step away from the jank, even if it means we're going to have trouble even keeping up with Precons. Still, we're pretty set when it comes to expensive fliers, so let's go ahead and slim our next creature type down a bit, shall we?

Criteria: Two-color creatures costing less than five mana that could be construed as Slivers and do not have or grant flying. As is tradition, all results are ordered by EDHREC score.

Speaking of disparate priorities, we managed to sneak in an Arcades payoff in the form of Dormant Sliver, along with a ton of protection for all of our "Slivers". Also, that Unsettled Mariner right there gives me an idea for our mono-colored inclusions....

So, there are two things that our deck absolutely, positively needs more of: Slivers and Dragons. It would also be nice if they weren't expensive, as we have more than enough of that in the three-, four-, and five-color cards. So, let's see what we can do to finish this off!

Criteria: Mono-color Changeling creatures with a mana value of three or less. As is tradition, all results are ordered by EDHREC score.

There's some badly needed utility and killing power hidden here in our Changelings, from Realmwalker to Mirror Entity to Amoeboid Changeling. Combine that with the boosts they'll all get with the likes of The First Sliver (yes, you do cast off of Evolving Door), Reaper King, and The Ur-Dragon, and what you have here is the meat and potatoes of the deck.

So here we are at 51 cards, and we still have a ton of issues. First off, we have a secret commander with no way to find it. We also don't know who our commander is. Can we really have a Commander deck with zero ramp, too? Seems sketchy, to say the least.

Let's see what we can do to tackle those with our remaining space.

First, we need to pick a Commander. We want it to solve one of our problems here, whether it be ramp or finding Evolving Door. Let's construct a list of all the five-color commanders that do either of those things!

Alright, so there's one, and it's a stretch, and it's already in our 99. Hm. Let's take a look at the other option, then.

I've never met a Top 10 more in need of some restrictive criteria, but even bending every possible corner case to fit, we still only ended up with 10 to choose from by including illegal cards.

With that said, there are a few great options in here. Morophon, the Boundless can make a ton of our creatures free, and it gets bonuses from every creature-type-lord we play. It also costs seven mana and we have no ramp, though. Ramos, Dragon Engine is slightly cheaper at six mana, but would almost immediately get huge and start supplying enough mana to cast our whole deck with the sheer number of multicolored cards we're playing. However, if we're looking to actually use our commander to ramp throughout the game, our real options are probably just The Ur-Dragon, Jegantha, the Wellspring, and Esika, God of the Tree. Of the three, the only one that really makes any sense to me is Jegantha. Though Esika is cheaper, we have no synergy with her whatsoever, and as much as The Ur-Dragon will ramp a significant portion of our deck at no cost, it'll also get us targeted right out of the gate and leave us hanging when it comes to the non-Dragon portions.

That just leaves Jegantha. While five mana is a bit hefty, if we untap with the Elk we're set, and unlike the rest of our deck, Jegantha also has an easily achievable color palette. It might be more boring than Morophon would be, in theory, but it's also more likely to keep us in games, rather than waiting on that seventh land while trying to hide behind a Changeling chump blocker.

That just leaves our final 10 slots to be entirely devoted to finding our true commander. Still, we don't want to scare the table with tons of powerful tutors! We're the clunky deck that can't put up a fight, remember. Plus, who wants to spend $800 on a meme deck? Let's find our Door but also keep things from getting too pricey.

While Goblin Engineer and Whir of Invention leave a lot to be desired in a deck with no other artifacts, they are mitigated somewhat by the picture-perfect inclusion of Magda, Brazen Outlaw. Other superstars for us include Trophy Mage and Sidisi, Undead Vizier, who will be more than happy to enter, find Evolving Door, and then be immediately sacrificed to it. What could be better?

Alrighty! Let's take a look at our 'final' decklist. While I'm tempted to do a Top 10 for all of our lands as well, let's put a pin in that for now and just fill in the slots with basics. No need to overthink it!

And there it is! The clunkiest nonsense ever put together with data. All it needs is a more thorough mana base. Maybe we'll figure that out next week, hmmm?

Speaking of just how clunky this mess of a Battlecruiser build is...

Finally, what's your favorite Birthing Pod variant? Have you built any decks around them, and were they based on combos, toolboxes, or hopelessly untethered piles of jank?

Let us know in the comments, and we'll see you at the kitchen table where we only plan on playing one three hour game, and having a good time doing it.