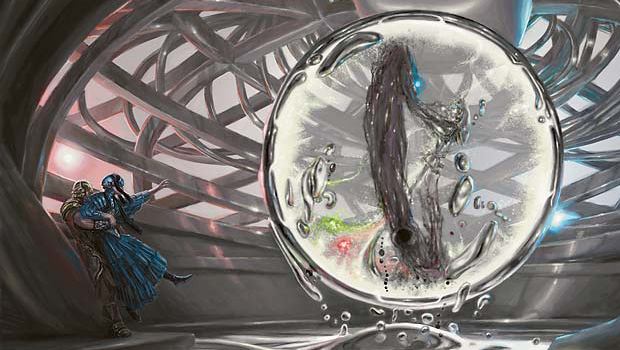 Welcome back to another edition of Trinkets & Tools, the series about "build-around" artifacts and enchantments in EDH! We're fresh off the heels of Aether Revolt, a set that included a number of exciting new artifacts for our format. So while artifacts are on everyone's minds, let's talk about an older artifact that often finds a home in artifact-centered builds, Prototype Portal! Prototype Portal is a 4 mana artifact with the Imprint mechanic, requiring that you exile another artifact from your hand once it enters the battlefield. Initially you give up the ability to cast that artifact as you normally would by exiling it, but that is where Portal's second ability comes into play. By paying X, which is whatever the converted mana cost of the exiled artifact is, and tapping you can create a copy of that artifact. This effect can be repeated every turn (or more often with untap effects) to turn that single artifact into many more, which is very useful in a singleton format.

At the time of writing, there are currently just under 1,300 decks on EDHREC featuring Prototype Portal. It is definitely a card with potential in a deck with a surplus of artifacts, however 1,300 looks fairly low when you compare it to the popularity of other cards found in artifact decks such as Myr Battlesphere, Kuldotha Forgemaster, or Steel Hellkite. This is likely because Prototype Portal isn't best served just being thrown into any artifact deck; rather, it's important that your deck have a specific plan that Prototype Portal can further, so it functions as something more than an expensive and sometimes slow artifact creator. The first thing to consider in building a deck with Prototype Portal is deciding which artifacts you want to imprint. EDHREC is a good source to find ideas; however, because Prototype Portal is so commonly put in decks with lots of artifact synergies, you should carefully consider which cards are worth imprinting with a critical eye, and which ones are not. Ideal artifacts are not too expensive, have an ability when they enter the battlefield (or leave if your deck has a lot of sacrifice outlets), or are good enough in multiples that having a few of them allow you to quickly take over the game. On other hand, look at Darksteel Forge, which is currently the most common card to show up alongside Prototype Portal. It is a great option to keep Prototype Portal protected, but there's very little reason to spend 9 mana each turn to get a redundant static effect.

So let's look at some artifacts on EDHREC's page for Prototype Portal that we do want to imprint. Solemn Simulacrum or Burnished Hart can be copied to help you ramp up your mana, while doubling as blockers when needed. Alternatively you could simply imprint a mana rock like Commander's Sphere, and then cash in the copies for card draw later in the game. If you want a direct ramping option, you could imprint a land like Darksteel Citadel. Wurmcoil Engine or Myr Retriever (and other similar recursive artifact creatures) have useful abilities when they die or are sacrificed, so when paired with a card like Krark-Clan Ironworks or a commander like Daretti, Scrap Savant, you can gain access to this ability as much as you need. Phyrexian Metamorph is another good option because you can use it to clone one artifact or creature each turn (even Prototype Portal). Consider the metamorph if you're interested in creating an army of a more expensive card like Myr Battlesphere or Blightsteel Colossus, since metamorph has a much lower converted mana cost of 4. Outside of blue decks, Sculpting Steel can fill a similar role. EDHREC also provides us a good list of cards that can help work with Prototype Portal once its in play. Many of these cards are synergistic not only with Prototype Portal, but any artifacts you have in play (which is nice considering the tokens made by Prototype Portal are artifacts too!). Darksteel Forge, as mentioned above keeps your both the portal and all its tokens safe from opposing Vandalblasts. Mirrorworks can create a second Portal letting you double up on possible Portal targets for only 2 generic mana. You can also double the portal's effects by using untappers such as Unwinding Clock, Voltaic Key, Clock of Omens, or even the newly released Paradox Engine. With so many opportunities to make copies, having lots of mana sources becomes very important, so also consider artifacts like Thran Dynamo to ensure you'll have lots of mana. Aether Revolt and Kaladesh has been a boon to artifact decks and many cards from the block are already showing up in decks with Prototype Portal. Gonti's Aether Heart seems like an odd choice of card to make copies of considering it is legendary and you cannot create multiple copies at the same time, but once you've built up enough energy, it can turn Prototype Portal's activated ability into an instant speed Time Walk. Scrap Trawler can give your artifact copies some additional use once their destroyed, as they do have a mana cost despite being copies. Panharmonicon causes a number of unique interactions; you can get double value out of the "enters the battlefield" effects of your created tokens, you can make extra Panharmonicons to double up on future effects, or most notably, if Panharmonicon is in play when you first play Prototype Portal, you can imprint two cards out of your hand instead of one. You'll be able to create a copy of both cards when you activate the portal anytime after, but be advised that the cost to activate the portal will be equal to the combined converted mana costs of the imprinted cards.* The other major category of artifact commanders that Prototype Portal plays well with are artifact sacrifice decks. These decks that are focused on sacrificing and recurring artifacts for value, featuring commanders like Breya, Etherium Shaper, Daretti, Scrap Savant, and Slobad, Goblin Tinkerer. Prototype Portal's main strength in these decks is creating an endless supply of artifacts to sacrifice for later use. Artifacts with death triggers are especially good imprint targets for the portal, such as the newly released Treasure Keeper from Aether Revolt. Slobad is an especially potent user of Prototype Portal because his ability can be used to protect the portal from incoming removal spells. This interaction has clearly been identified by EDHREC users, as nearly 30% of Slobad decks use Prototype Portal. An honorable mention to this category would be Sharuum the Hegemon, a commander with a simple but powerful recursive ability. Sharuum is a very versatile commander capable of running plenty of different artifact-based strategies, and this is just one of the many that it can be used for. However, according to EDHREC, Prototype Portal is not a common inclusion in the deck, showing up in just barely over 10% of Sharuum builds. For any aspiring deck builders that want to use Prototype Portal with this commander, I'd strongly recommend using EDHREC's advanced filters option to assist you in researching ideas. Finally, I'd like to briefly mention a few other artifact commanders that don't fit into the groups above, but still get a lot out of having Prototype Portal in their decks. Muzzio, Visionary Architect and Arcum Dagsson both have activated abilities that help you cheat Prototype Portal into play, meaning you can start churning out copies even earlier in your games. Kurkesh, Onakke Ancient provides double value from your portal for only one red mana, letting you fill your board faster and for cheaper. Finally, Kemba, Kha Regent, Akiri, Line-Slinger, and other equipment focused voltron-style decks can use Prototype Portal to pump out multiples of useful equipment.

Let's wrap up this look at Prototype Portal with my own take on a deck based on Thada Adel, Acquisitor equipment/artifact thievery deck. This deck uses Prototype Portal to make copies of mana rocks to help ramp or equipment like Sword of Vengeance so I can suit up not only Thada but her army of thopters! I've been having a lot of fun with this deck and I look forward to adding more interesting interactions. Let me know how you've used or plan to use Prototype Portal in your own artifact decks! You can find me on twitter @DomSaccento.

Dom is a Magic player from Northern New Jersey. His favorite formats are Commander and Draft. When he's not playing or reading about Magic he can be found concert-going or cooking.