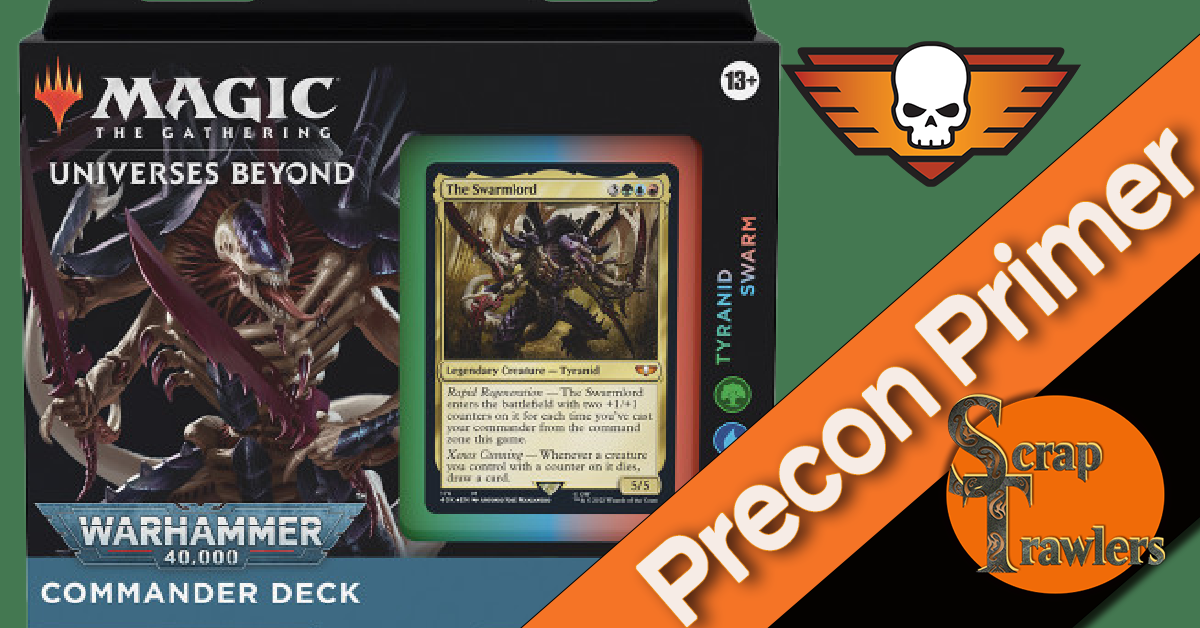 To think that Tyranids are mindless beasts is a grave mistake. - Marneus Augustus Calgar, Chapter Master of the Ultramarines

Hello dear reader, and welcome to EDHREC’s Precon Primer series! In this series, we take a deep dive into the latest precon products by reviewing the new commanders, discussing deck strategies and how they play out of the box, and highlighting the best new cards and reprints. I’m Nick from the Scrap Trawlers, where we do EDH on a budget, and I’ll be your guide for this article.

As part of Wizards of the Coast’s Universes Beyond product series, where outside IPs are brought into the world of Magic: the Gathering, they’ve teamed up with GamesWorkshop to create four new Commander decks based on some of the factions found in Warhammer 40,000. These factions include the Forces of the Imperium, the Necron Dynasties, the Ruinous Powers, and the Tyranid Swarm. For this article we’re tackling the Tryanids, an insect-like alien race that acts in hive-minds.

Somewhat similar to Slivers in nature, the Tyranids are an adaptive, ever-evolving species that seek to evolve, grow, and consume anything and everything in their wake. They value strength in numbers, preferring quantity over quality. However, not all of their forces are small cannon fodder. There’s plenty of cannons, too! If you want to know more about the lore of the Tyranids, you can find extensive information on the Warhammer40k Fandom Wiki, found here - https://warhammer40k.fandom.com/wiki/Tyranids.

So who is leading the stampede, anyway? Let’s find out!

Calm Before the Swarm

The Tyranid face legend is The Swarmlord, a 6 mana 5/5 with some pretty advanced abilities. The first one, Rapid Regeneration, gives 2 +1/+1 counters to it for each time you’ve cast a commander from the zone. So in reality, you’re getting a 7/7 for 6 on the first cast. This also triggers if you’re running a different commander, doubly so with partners! The second ability, Xenos Cunning, provides card draw whenever your creatures with counters on them die. Card draw in the command zone is always a plus, and being able to see more cards each game is undeniably powerful, and fun!

As far as abilities go, this combination is somewhat unique to Temur legends. Popular legends, like Animar, Soul of Elements, Kalamax, the Stormsire, and Omnath, Locus of the Roil, all get +1/+1 counters. These heavy hitters can get pretty big, but the counters don’t provide much synergy to other creatures. For going wide, Xyris, the Writhing Storm is the Temur posterchild to make a lot of bodies, but doesn't care much for counters. The Swarmlord wants it all: a vast army of creatures juiced up with counters to maximize gains, which represents the Tyranid Swarm pretty well in Magic terms. Let's take a look at the decklist:

The alternate commander is Magus Lucea Kane, a 1/1 for 4 mana with two new abilities: Spiritual Leader puts a +1/+1 counter on a creature at the beginning of combat; and Psychic Stimulus, which taps Lucea to add 2 colorless mana, and your next spell or activated ability with X in the cost gets copied. These abilities don’t necessarily synergize together, but the second one is a doozy! Temur is no stranger to copying things, with format all-stars in Riku of Two Reflections and Kalamax. But this is the first in the colors that can double activated abilities!

Both Magus Lucea Kane and The Swarmlord are interesting and powerful legends that are sure to strike fear into the hearts of your opponents, and either one is a great choice as the leader for the deck. I personally love The Swarmlord. Which will you choose?

The deck’s gameplan is to utilize +1/+1 counters to acquire new resources, deal with potential threats, and of course beef up our creatures for dominance in combat. This theme is carried with one of the new keywords found across multiple Tyranid cards, Ravenous. All creatures with Ravenous have X in their casting cost, and enter the battlefield with X counters on it. If the value of X is 5 or more, you draw a card. This is a fantastic way to keep your creatures large and in-charge, and ensures you won’t run out of gas in the mid to late game. The added flexibility in casting cost allows them to meld neatly into any part of your mana curve throughout the game!

There are 11 Ravenous cards in total and, aside from providing potential card draw, also serve various functions like removal with Aberrant, Exocrine, Mawloc, Ravener, and Zoanthrope, ramp from Sporocyst, protection in Tyrant Guard, making tokens with Termagant Swarm and Tervigon, adding more +1/+1 counters thanks to Broodlord, or are just plain annoying to get rid of like Hormagaunt Horde.

Tokens are also important to our overall strategy. The more bodies we have, the more counters we can spread out; and the Tyranids always want more. There are plenty of different ways to make small tokens with help from Gargoyle Flock, Termagant Swarm, Tervigon, and Tyranid Harridan, or bigger tokens from Lictor, Old One Eye, and Tyranid Invasion, and even token copies of your opponents’ creatures like Genestealer Patriarch!

So we’re going wide and going tall. Most importantly, we’re going to combat, which is how the deck is going to win. If we have lots of small creature tokens we can ping our opponents to death with Ghyrson Starn, Kelermorph, or make even more tokens with Tyranid Harridan. If we have a plethora of counters we can utilize Clamavus and The First Tyrannic War for a big power boost, or summon a Hierophant Bio-Titan to squash our opponents like bugs. Winged Hive Tyrant and Old One Eye will provide our creatures much needed evasion. If for some reason combat isn’t an option, Screamer-Killer can close the door in quick fashion.

How does the deck play? Due to the fair number of X spells, the deck appears deceivingly fast to play. While an average mana value of 3.32 is excellent, it does however count cards like Sporocyst as a 1 mana spell. While the math is technically correct, you'll want at least 3 mana available before you cast it. With that being said, the deck plays best with lots of mana. Tyranids want more, so look for an opening hand with 3-4 lands and at least 1 ramp spell. Your Ravenous creatures and The Swarmlord will keep cards coming during the middle and late stages of the game.

One thing to note when casting a Ravenous creature, you shouldn’t always dump all of your mana into the X cost. While this does make the creature as big as possible, there may be times when you need to go wider instead of taller. Try to get X to 5 as much as possible to maximize efficiency, lest you be overrun by faster creature decks.

So how do the Tyranids fare against the other Warhammer 40000 decks? After a couple rounds of testing, the decks seem pretty balanced. The battlefield will get gummed up with creatures fast. Removal is at a premium in the precons, so choose your targets carefully and sneak in damage where you can. If you over commit in combat, you will be swiftly outnumbered by a squadron of Space Marines, overrun by an army of Necrons, or demolished by Ruinous Daemons. Thankfully the Tyranids are usually bigger than the other creatures, so make some blockers and continue to acquire more resources until you’re ready to strike. If you're playing these precons against each other, consider using Magus Lucea Kane as the commander. She'll help fill up the board by doubling your creature and spell casts to ensure you don't fall behind in creature count.

All of the new cards are powerful and exciting, but which ones are the cream of the crop? Termagant Swarm and Tervigon stand out to me as some of the best creatures in the deck. Both come down very early and provide additional tokens, which synergize well with cards like Tyranid Harridan and Ghyrson Starn, Kelermorph. The tyranids may have already invaded Ravnica, because Tyranid Prime is here to give Evolve to all of our creatures! Since the Ravenous creatures are flexible in casting cost, we’re able to trigger this very easily.

With all of these new cards there isn’t much room for many all-star reprints, but there are a few worth shouting out. Herald's Horn is fantastic in any creature family deck, providing passive card draw and ramp, making it easier to max out on those Ravenous casts. Icon of Ancestry is another, providing a small power boost and decent card selection should you need it. The best of the bunch has to be Hardened Scales. An all-star across many competitive formats, this card tends to creep up in price when not regularly printed. With its new art and being one of the best counter pay-offs in the deck, this inclusion is a home run.

As a standalone product, the stock list is terrifying, powerful, and an absolute blast to play right out of the box! If you’re a fan of creature family, counter synergies, and aggro decks, The Tyranid Swarm is faction for you. The Warhammer 40,000 preconstructed decks are a little more expensive than the usual batch of precons we see with Standard set releases, but with so many new and powerful cards, and all with new art, these are definitely something to consider adding to your collection. Check back soon for my guide on how to upgrade this deck on the cheap!

Thanks for reading! If you’re looking for more Scrap Trawlers you can find us making budget content on YouTube https://www.youtube.com/c/ScrapTrawlers and streaming on Twitch https://www.twitch.tv/scraptrawlers