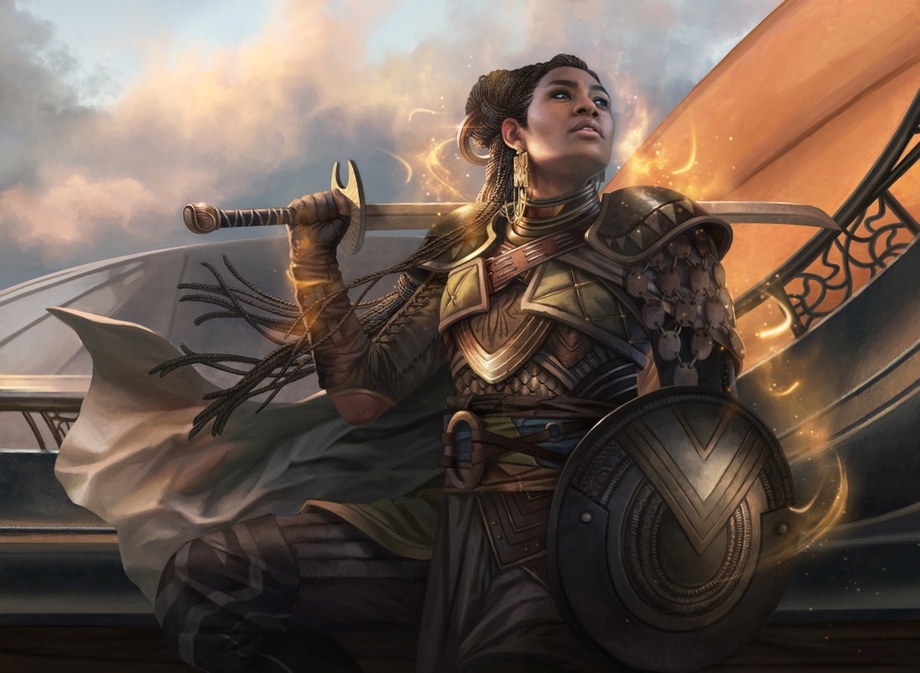 Oh, hello there! My name is Seth Cross, and a few months ago I finished my first and only series for EDHREC.com, “Replacement Commanders”. The series went over each of the two alternate legendary creatures from the four Commander 2017 decks in some fun and crazy ways. For the eighth article, I announced that I would have to stop writing to concentrate on getting back into my college courses, hoping to complete my degree. I will not lie to you all, I was also at a point where I was unsure of a second series to start anyway and I still haven't thought of something new and interesting to...

Wizards of the Coast: Dominaria will feature a plethora of Commanders at the Uncommon rarity.

Well then. Cue the “WE BACK FOLKS” the return montage music!

and the Meek Shall Inherit...

Welcome to Uncommonders! That is right! Uncommon rarity Commanders. Why, you may ask? Because it is something different, something unusual, something… Uncommon! Everyone loves something new and cool!

Wait, what? Uncommon commanders…are not new, right? You are correct! The first time we saw legendary creatures printed at uncommon was way back in the roots and first-beginnings of Magic: the Gathering. Legends, the third set of the game printed 20 uncommon “Summon Legend” cards, which have since been errata'd to legendary creatures. It only makes sense that Dominaria, a set with the tag line of “Welcome home” would head back to their roots and do this all over again. I bet you are thinking as you read this that we are only going to be talking about the uncommon Dominaria legendary creatures, right? Wrong. Go big or go home, I like to say and I am typing this in my home, so the only option is to go big! We are going to try to cover every uncommon legendary creature printed in Dominaria and another one from before Dominaria for each, including cards that were originally printed at rare and downshifted to uncommon. Looking at you, Zada, Hedron Grinder and Bladewing the Risen. We must start strong, though, so we WILL start off with a Dominaria uncommonder! What better way to start strong than start with one of the new crewmembers of the fabled, iconic Weatherlight? What better way to start strong than with… Wizards of the Coast was bound to garner huge amounts of attention when they revealed cards with names like Sisay and Capashen on them. These are the descendants of the heroes of Magic's past, a new generation to inspire future players of the game. Shanna shares some similarities with her ancestor, Captain Sisay, both in the sword they carry and their abilities. Captain Sisay focused on finding other legendary creatures while Shanna's ability makes her stronger the more she is surrounded by creatures. Color identity is very important for Shanna, as green white (Selesnya) colors are known to work very well with token creatures and “go wide” strategies that make Shanna dangerous for hitting that special number in Commander (sometimes called “blackjack!”) by buffing her up. Another similar commander is Oviya Pashiri, Sage Lifecrafter in the sense that Oviya can either make little tokens or one token that gets bigger as you make little tokens for that big smack. Also take note of Shanna's creature types… Human and Warrior. Two very prominent tribes, especially in recent sets.

NOTE: Since the cards are not appearing on sites to build decks withn just yet, EDHREC.com cannot collect this non-existent data for searches. Unlike how we made lists with my Replacement Commanders series, we are going to use EDHREC.com to search for themes, tribes, or even similar Commanders and we are going to break ground with these Dominaria commanders ourselves!

Tribal decks typically win via one of two main strategies. Either the tribe has very strong synergy and can overcome most adversaries (Slivers, for example) or are very good at making tokens to swarm the field and overrun (or just actually Overrun, given the Shanna's color identity) our opponents. I drew attention to Shanna's creature types on purpose, so the first thing I looked at was EDHREC.com's Warrior tribal page. Let me just say that the results presented a problem for this particular commander: Trying something more specific, I decided to use scryfall.com and search for green and white Warriors and use the EDHREC ranking to find the best warriors. This seemed to do the job and I am very pleased with the top result: For Replacement Commanders, I did an article on Mirri, Weatherlight Duelist and explained that you can go wide with the famous cat warrior or voltron and still find success. Since Shanna is now serving on the Weatherlight herself, it seems only natural to team up with one of the ship's most famous crew members. Since Captain Sisay is a Human Soldier and not a Warrior, we can replace the original Weatherlight captain with Djeru, With Eyes Open if we still want the ability to tutor out other legendary creatures. Tolsimir Wolfblood is another creature that gives Shanna power and toughness, then boosts Shanna for another two power and toughness as well. On that same thought process, Wilt-Leaf Liege is not a warrior, but will also make Shanna and our other creatures stronger as a lord. Combat-based lord effects can win games, so Mirror Entity and Jazal Goldmane seem to be good choices.

Thinking about building out our warrior army, Oketra's Monument and Oketra the True are both capable of pumping out tokens, while Doubling Season, Parallel Lives and Anointed Procession double our value. If elves are your thing, Rhys the Redeemed in any kind of token deck is not a bad idea and Imperious Perfect, Lys Alana Huntsmaster and Sylvan Offering get explosive very quickly. Mentor of the Meek and Fecundity help draw cards and since Shanna will most likely grow to at least a power and toughness of five most of the time, Drumhunter can grant us some card advantage as well. Anointed Priest, Soul Warden and Soul's Attendant will keep our life total high and out of the red zone. We can also toss in Perilous Forays to use our tokens as ramp fuel, along with the usual spells like Kodama's Reach and Cultivate. Cryptolith Rite is a good idea as well, so our tokens can be mana. To round the deck out, we grab support cards like removal, board wipes and some protection from those things for ourselves. The list I generated looks something like this:

We touched on Captain Sisay's ability to find legendary creatures and how that related to Shanna's abilities of becoming stronger with creatures. Since Shanna is, as the card says, Sisay's Legacy, why not mash the two concepts together? What about green and white Legendary tribal with an ever-growing commander as you get more legendary creatures? Currently, Ghalta, Primal Hunger and Zetalpa, Primal Dawn are the two highest EDHREC ranked Commanders in the colors, but some of that may be the craze over Elder Dinosaurs with the new set. The third highest legendary is Elesh Norn, Grand Cenobite, which seems exactly like what we want to do by making Shanna stronger. Elesh Norn is followed by Avacyn, Angel of Hope, giving us an indestructible pseudo-hexproof commander while Elesh Norn's green Praetor friend, Vorinclex, Voice of Hunger is also high on the list. We can even keep Tolsimir Wolfblood from the warrior list because Tolsimir is legendary, buffs our entire deck at least +1/+1 AND even makes another legendary creature, Voja. One thing we may notice is that most of these high-value cards also come with a high converted mana cost, so ramping with Azusa, Lost but Seeking, Nissa, Vastwood Seer, Karametra, God of Harvests and draw cards with Reki, the History of Kamigawa.

The deck price will inevitably climb higher than Shanna's power and toughness, but imagine the satisfaction of flooding the field with some of Magic's green and white colored commanders and swarming over our opponents with the legends of the game. Looking at some of the other Dominaria cards, Shalai, Voice of Plenty gives our field and our self some protection and beefs our creatures up. If we want a wincon that is 100% on flavor, the new Kamahl's Druidic Vow is like Genesis Wave, but cares if the cards we find are legendary, keeping us on theme. The new Urza's Ruinous Blast is even a one-sided board wipe, since there is a small chance anyone at the table (or even the entire rest of the table put together) will be running as many Legendary permanents as we are. We can even live the dream and assemble Kaldra by getting all three pieces onto the field.

You could even say it would be legen… wait for it… DARY!

Here is what I think the decklist would look like:

I will be the first person to admit it: Green and white tokens and legendary tribal are not brand-new concepts. Commander is not a “new” format that people must work to “figure out” anymore. One of the great things about our favorite format is that it evolves. Note: I said it evolves, it does not rotate. With every new set, we get a slew of new cards to fit and mash into holes of old builds or themes and these Uncommonders are an awesome, fun way to do just that. I like to believe that when you reveal your commander to a table and it has a silver rarity icon, people will not know what to expect and surprising the table is one of my all-time favorite things to do. I hope some of you try Shanna, Sisay's Legacy out and surprise your friends (and maybe dominate the field a few times after that!) May all your top decks be bombs, and see you next time!