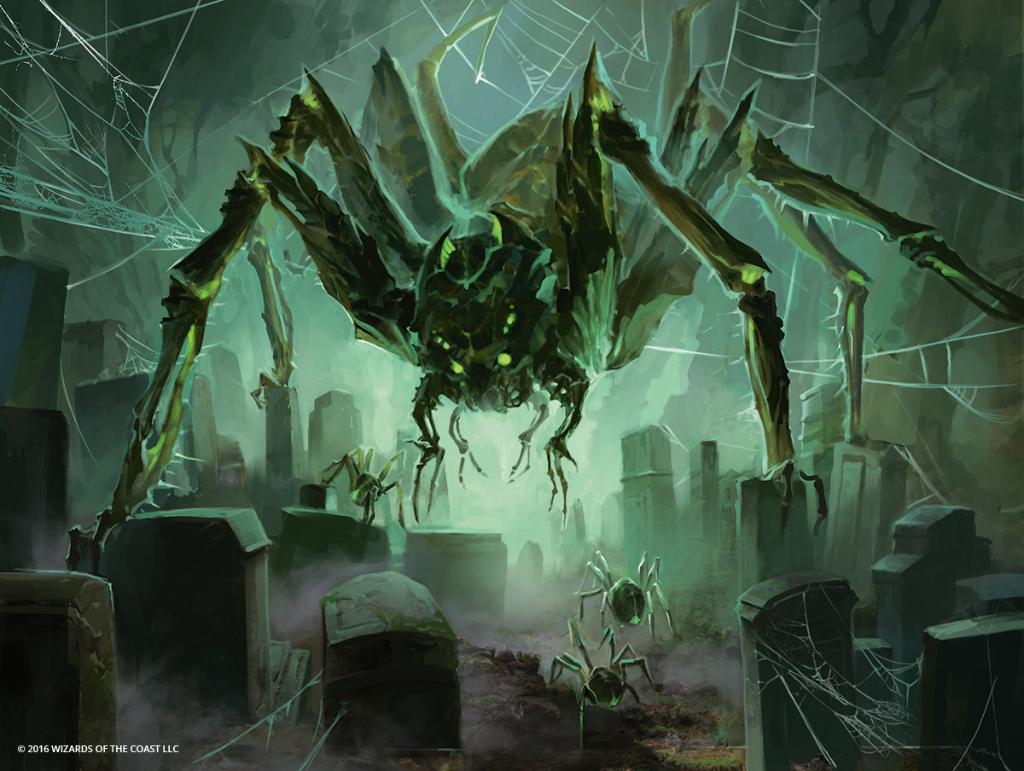 This article is Round 13 of the Underdog’s Corner, a series spotlighting various lesser-used commanders and their place in the format. Each article makes the argument for a single commander that deserves more play, as well as highlighting key cards and synergies.

Hello, everyone and welcome back to the Underdog's Corner! In my my continuing attempt to keep the commanders that I cover somewhat color-balanced, we're going to cover one of my favorite color-combinations: Green/Black! Green/Black does not want for powerful commanders nor options. Over the past year, the Golgari Swarm has received a staggering five new commanders. We even saw two of those new legends appear in the our return to Innistrad! While The Gitrog Monster sky-rocketed to become the second most popular green/black commander, our entrant for this discussion didn't get to enjoy as much immediate success. Ladies, gentleman, and arachnids, meet out newest addition to our growing stable: Ishkanah, Grafwidow!

Ishkanah, Grafwidow came as an effort by Wizards of the Coast to give spiders a legendary creature to helm a tribal-deck. While I didn't realize that spiders were so popular, I got excited for the deck once I saw Ishkanah. There are a lot of things happening on Ishkanah's card, and I appreciate how well all of them are tied together. Let's take a look!

"Delirium - When Ishkanah, Grafwidow enters the battlefield, if there are four or more card types among cards in your graveyard, put three 1/2 green Spider creature tokens with reach onto the battlefield."

As one of the prominent mechanics of the Shadows Over Innistrad block, Delirium is a new take on the older Threshold mechanic. Instead of counting the total number of cards, we're counting card types. For those that don't know, the eight card types in magic are creature, enchantment, artifact, land, instant, sorcery, planeswalker, and tribal. There are a few other super-types that exist (Legendary, World, etc), but those won't add to our growing delirium. If we manage to achieve this condition, Ishkanah brings three spider tokens along with her, which helps to fuel her second ability.

"6B: Target opponent loses 1 life for each Spider you control."

This is the ability that makes Ishkanah feel like a true tribal commander. This is a synergistic payoff for her ability, and it encourages you to gear your build to produce as many spiders as possible. If you're wondering about the ability's cost, it was costed to mirror the flashback cost of one of the most beloved cards in Innistrad's draft format: Spider Spawning.

While Ishkanah is a great commander for spider-tribal, she's hamstrung by the fact that spiders lack a high density of powerful options. We do have good options in-tribe such as Nyx Weaver and Silklash Spider, but, personally, the rest leave something to be desired. For this article, we're going to shy away from going all-in on spiders, but still focus on maximizing the most powerful tribal cards we do play. Using EDHREC's advanced filters are a great way to do this. If we look at Ishkanah's Signature Cards, we can search for cards that would most likely be excluded if we abandon going all-in on spider tribal. Skysnare Spider appears in a massive 68% of Ishkanah, Grafwidow decks, and I think if we exclude it we can garner a better idea of alternative strategies for our Grafwidow. When we exclude Skysnare Spider, we go from 288 to 90 decks, but we're still seeing a high-focus on other spiders, so let's narrow down our search even more by excluding Stingerfling Spider. Now we're talking. We've narrowed down our pool of cards to only 56 decks, but I think now we've sufficiently moved ourselves from looking at cards that are included for the sole reason of being tribal spiders. We aren't wholly going to abandon the tribe, but we're going to including those that offer utility or power like the previously mentioned. Nyx Weaver.

Spider Spawning is one of the major cards that's going to get a nod from us, as it plays into both of Ishkanah's abilities while also giving us a bit of extra direction. Honestly, it's the card that made me most excited to take a look at Ishkanah. We're going to want to fill our graveyard to ensure that when we cast Ishkanah we can actually have delirium triggered, and spider spawning gets stronger as we fill our graveyard. This can push us into looking into other cards that care about the number of creatures in our graveyard. Arachnogenesis will have variable mileage, but a spider-focused Fog effect will certainly be useful. Not only will we be able to blank a deadly strike, but we'll also be able to gear up to strike back with Ishkanah's ability.

With our Grafwidow leading the way and her spawn following closely behind, we can look at cards that care about creature cards in our graveyard as well as cards that help dump them there.

As the leader of the Golgari on Ravnica, it doesn't come as a shock that Jarad, Golgari Lich Lord would be good in other green-black decks. Not only does he get a buff from counting creature cards in our graveyard, but he can also drain our opponents like Ishkanah. He is also able to recur himself by sacrificing lands, which can help fuel delirium when we need it. While it may be able to look at other graveyards, if our game plan is going smoothly Corpse Augur should net us plenty of cards if we target ourself upon its death. Even if that's not the case, we can target an opponent if their graveyard is more stacked than ours.

No Cage Till Brooklyn

Just like Spider Spawning earlier, Kessig Cagebreakers rewards us for stacking creatures in our graveyard with creature tokens. With this inclusion, we can start to look for cards that help generate more tokens, such as Second Harvest and Parallel Lives. Both of these help to generate extra value with our commander and our signature spawning spell. Another card that may not make itself immediately noticeable is Nighthowler. While it may be more fun than good, if we've been filling our graveyard it can create a massive threat. Also, it happens to be an enchantment as well as a creature, checking off two card types.

While cards that mill us slowly are good to help build our graveyard toolbox, sometimes we need to dig through the top of our library to build up delirium. If the tools we use to do this aren't creatures, it helps accelerate our game quickly. Vessel of Nascency found a home in the standard deck GB Delirium as a cheap way to attain our delirious condition. Not only is it card selection, but it itself is an enchantment that gets thrown into the yard. While Grisly Salvage doesn't give us the option of grabbing as many card types as the vessel, it does dig one card deeper for one less mana overall. Both of these are invaluable to set up delirium. Jarad's Orders isn't quite the type of selection at first glance, but with artifact creatures and enchantment creature included in the deck, we're able to toss an extra card type into our graveyard while also tutoring for whatever creature we may need.

One of the things that I've done with my deck-building recently is aski myself very early on how I plan on winning. That seems pretty obvious, right? However, that tended to be an after-thought for me for a long time. Whenever I would build a deck, I would focus very hard on trying to accomplish an idea or the general gameplan before establishing exactly how that translates into a win. For example, I wanted to build around monarch with Queen Marchesa. I planned out how to play politically, but I had no clue how the deck would actually win. That was a weakness, and it stalled out my deck-building process and excitement when I realized that my interesting deck wouldn't really accomplish much.

So now that I've aired out my own personal short-coming, how do we win with Ishkanah, Grafwidow?

Probably the most popular of the bunch is attempting to execute a combo win. Discussions online quickly surmised that Nim Deathmantle and Ashnod's Altar would probably be the go-to way of finishing off all our opponents. By sacrificing Ishkanah and her spiders with the altar, we are able to loop Ishkanah with Nim Deathmantle to create infinite spiders and infinite mana. With Ishkanah's activated ability, this ends the game by draining out opponents. The combo even has redundancy as cards like Brood Monitor can fill in for our commander. By milling and other forms of card selection, we're actually able to dig through our deg to find it if we're incline, and cards such as Regrowth and Treasured Find can recur them.

One card that I think is good for the token-centric build that I've proposed is Craterhoof Behemoth. This card is one of the most infamous targets for Tooth and Nail combo, but even without that it's a potent finisher on it's own. Playing out 'Hoof the turn after playing Ishkanah by itself would be devastating, but there's also the possibility of blanking our opponent with Arachnogenesis and then finishing off players with our new found army of giant trampling spiders.

Sometimes though, all you need is a world-corrupting terror such as Emrakul, the Promised End. Appearing in Eldritch Moon alongside Ishkanah, Emrakul sports a cost-reduction mechanic that mirrors delirium. By building our deck already to maximize the frequency that we can turn-on Ishkanah, we're also increasing the discount that our Eldrazi titan gets. A 13/13 flyer with trample is sure to knock a player off unanswered, and luckily for us, Emrakul helps the odd of that happening by letting us Mindslaver an opponent when she is cast.

Waiting in the Web

That's it for this week's installment! Whether or not you suffer from arachnophobia, I hope I've given you a little idea of what Ishkanah is able to do. I think she's a really interesting commander, and I'm excited to see what kind of support she gets in the future. Below is a prototype decklist:

Thanks for once again joining me in the Underdog's Corner!