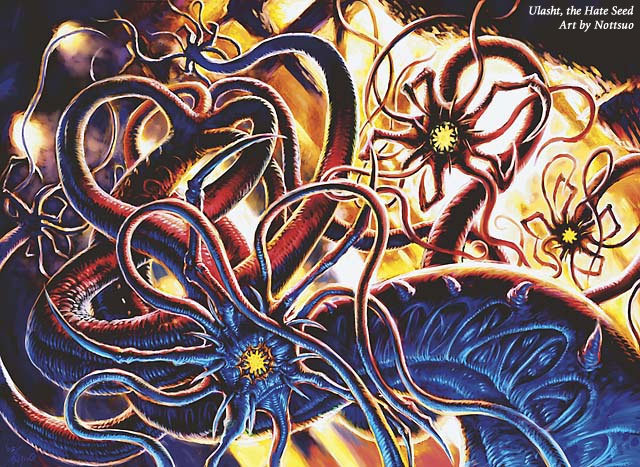 This article is Round 14 of the Underdog's Corner, a series spotlighting various lesser-used commanders and their place in the format. Each article makes the argument for a single commander that deserves more play, as well as highlighting key cards and synergies.

Hello everyone and welcome back to another edition of the Underdog's Corner! As time goes on, it becomes more difficult to sort out fresh and new underdogs. However, despite this gruul-ing task*, I'm here today to bring you a commander that has been away from the spotlight a tad too long. With the release of Commander 2013, we saw a new face around the block: Marath, Will of the Wild. Marath is a great toolbox of a commander with incredible versatility, affording you multiple options at every turn. Now, while Marath is an incredibly popular commander, he is not the first of it's kind. Appearing originally in Ravnica: City of Guilds, this week's underdog could easily have been an inspiration for Marath. While more limited in the sheer amount of options, our contender this week focuses it's game plan to a sharp edge. Ladies, gentlemen, and avid fans of creatures with multiple heads, today we look at the 12th most played commander in the red-green color combination: Ulasht, the Hate Seed!

*EDITOR'S WARNING: Each writer it allotted 10 pun passes to be used across their body of work at EDHREC. You are now down to 9, Mason.

If you're familiar with Marath, Ulasht, the Hate Seed should remind you of the powerful Nayan-colored elemental. However, you may notice that there are a few key differences. Ulasht is limited to using its counters to ping creatures or create 1/1 saproling tokens. However, the key difference that is going to push Ulasht's agenda is the first ability on its card.

Ulasht scales with the number of green and red creatures we control. Notably, any creature that is both red and green generates two counters when Ulasht enters the battelfield. Because of this, multi-colored mana dorks like Radha, Heir to Keld and Zhur-Taa Druid get windmill slammed into the deck.

According to data on EDHREC, there appears to be a strong lean towards Ulasht being the head (or would it be heads?) of a red-green hydra tribal deck. While it appears that around 30% of the decks logged by EDHREC focus on the tribal aspect, we're going to turn our attention in a different direction just like we did last time with Ishkanah, Grafwidow. We're going to focus mainly on creating a massive army of creatures with Ulasht at the helm... or is it helms?

Root of All Evil

While Ulasht can act as removal, that ability won't be our primary focus. However, we could still include a few cards like Basilisk Collar or Nightshade Peddler for a pinch of spot-removal without taking away from the main plan. Our commander and the support around it are mostly going to be focused on generating tokens and then weaponizing them.

While Ulasht can create a swathe of tokens on its own, our hydra relies on having critters around before making an appearance. This isn't a hurdle as it lets the deck function perfectly if Ulasht can't stick on the battlefield for long, but it allows the deck to accelerate once Ulasht hits the field. To create this swarm, we're going to use cards that immediately create many tokens as well as "engine" cards that will generate more if allowed to stick around. Some prominent cards like Awakening Zone or Brood Monitor are going to be left out sadly as Ulasht needs red and green creatures to grow.

Siege-Gang Commander and Avenger of Zendikar are pound-for-pound some of the heaviest hitters when it comes to generating a mass of tokens at once. Siege-Gang creates three bodies and avenger creates five, eleven, or more tokens upon his arrival. However, these are limited in how much they can create unlike Chancellor of the Forge. The Chancellor, while expensive, creates an instant army ready to swing at an opponent while doubling our field. Combined with token doublers like Parallel Lives or Second Harvest, chancellor turns an unassuming board into a winning state very quickly.

However, creatures aren't the only way to generate tokens; some instants and sorceries available in our colors are very powerful. While Dragon Fodder, Krenko's Command. Hordeling Outburst don't necessarily fall into the "very powerful" category, they provide a valuable resource by generating multiple bodies for Ulasht. Just like how Chancellor of the Forge doubled our field, we have a sorcery that can do that as well. Mogg Infestation doubles our tokens, since we're unlikely to destroy our nontoken creatures. This advantage combined with other cards to be discussed create very dire situations for our opponents. But wait, there's more!

Saproling Symbiosis is another card that doubles the number of creatures for us. We have a wealth of options in creatures as well as instants and sorceries. We even have a creature that blends this line perfectly: Wort, the Raidmother. Upon entering the battlefield, Wort creates two red AND green goblin tokens. If we remember from earlier, each red and green creature causes Ulasht to enter the battlefield with two counters. Not only does Wort and her minions give us six counters on her own, but she also can use them to copy our instants and sorceries. By giving each of our instants and sorceries Conspire, Ulasht suddenly has a spell-slinger angle. Copying a Mogg Infestation or Second Harvest will quadruple the number of creatures we have. With Wort added, I feel like Dualcaster Mage can find a niche within the deck without our token producers looking at him strange.

If you have noticed, we've talked about at least six different cards that create goblin tokens. With that many Goblin producers, I feel that Krenko, Mob Boss gets the nod. If left alone, Krenko by himself will easily outpace most other creature decks. Combined with effect like the aforementioned Chancellor of the Forge or Mogg Infestation, we create a difficult situation for our opponents.

While we can create this giant army, sometimes we need an extra push to seal the deal. Cards like Craterhoof Behemoth, Beastmaster Ascension, and Purphoros, God of the Forge are obvious inclusions, but what else do we have to seal the deal?

Goblin Bombardment, Outpost Siege, and Vicious Shadows all punish our opponents for trying to destroy our field, or even just letting us turn our excess tokens into burn. This is especially potent with Mogg Infestation or even another potential win condition: Descent of the Dragons.

However, if we want a burn effect that's good for a one-shot knock out, look no further than Burn at the Stake. Not only does it leave our tokens on the board, but we're going to hit our opponent for triple the number of creatures we tap down. I've lost several games to this card coming out of nowhere.

Another great card with Ulasht is Scythe of the Wretched. Shockingly, this card only appears in five decks on EDHREC! That's absurdly low especially since it combos with our general and Ashnod's Altar, a card that appears in 35% of Ulasht decks. With a tiny bit of set up so that Ulasht enters with a few counters, this combo lets us create infinite mana, infinite counters, or infinite saprolings. Depending on the situation, all of these will help to end the game in our favor. We can even steal all of our opponents creatures once we've generated infinite mana thanks to Ulasht's pinging ability.

A Hellion of a General

While there are several powerful cards like Xenagos, the Reveler that I didn't get to touch on, that's going to be it for this installment of the Underdog's Corner! I hope you've enjoyed getting a look at this alternative token general. Despite the spotlight shifting to newer and shinier generals, Ulasht still brings a wealth of power and versatility to the board. Below is a prototype decklist that can be a launching point for you if you're interested in our newest underdog inductee.

Once again thank you for reading! Let me know I missed anything.