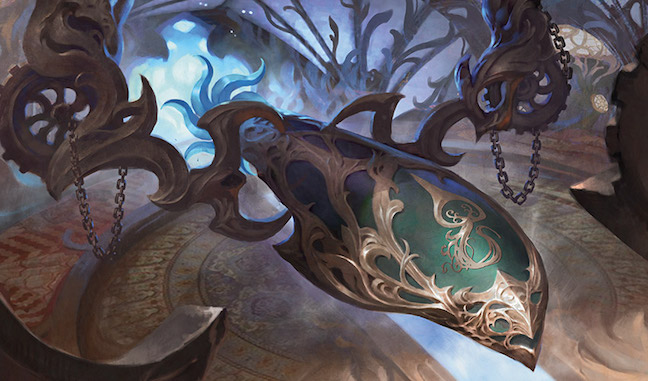 Welcome back to Weird Harvest, where we strive to weaponize jank to our strategic advantage. This week I figured we would take a break from our regularly scheduled programming to spotlight a deck building concept that is the embodiment of jank. It’s no secret that artifacts are a critical component of our format, with just about every deck utilizing them in some capacity. However, to make an entire deck of artifacts is just plain silly. That’s exactly why we’re going to do it. Let’s get inventive as we dive into mono grey EDH with Hope of Ghriapur!

Hope of Ghirapur is by far one of the few cards from Aether Revolt that sent my mind into a frenzy. Don’t get me wrong, it was a cool set, but this card just oozes potential for so many builds. For just one generic mana we get evasion in flying, a 1/1 body, and a sacrifice-based combat control ability. Forcing a player to skip casting non-creature spells can hurt a wide range of decks. Probably one of this commander's biggest advantages is that it’s so cheap that it will likely hit the field early and start having an immediate impact on shaping the game's outcome. We can single out our problem opponents early and set them back by either denying their ability to cast ramp spells or even mana rocks. We can even deny them sculpt cards like Sylvan Library or Sensei’s Divining Top. This alone is reason enough to consider letting this card take the helm.

Having a sacrifice ability while offering a fair degree of control makes our commander a perfect fit for a stax style build. Having such a cheap CMC means that we could build this card like a stax based Voltron deck, but that almost seems to be too expected. I think it would be far more advantageous to work in some Voltron elements while taking the recursive lock down stax approach. In order to do this, we’re going to have to enlist the help of some well known threats for the archetype.

The ability to destroy a planet is insignificant...

Stax is probably one of my favorite archetypes to build. I’m not sure if it’s because I ran it in the old days of Legacy and Extended, but over the years I developed a fierce devotion to the build. For those that aren’t familiar with the term, it is most simple to explain like this. Smokestack is a card that exists, and we are going to leverage it with recursion to create a net negative situation for our opponents. Simply put, we build around the idea to make sure it hurts our enemies way more than it hurts us. Smokestack alone isn’t enough, however, and we must offer it some support cards to help tighten our grip on the board state. This is where Trinisphere, Ward of Bones, Damping Engine, Mana Web, and Storage Matrix come into play. Each of these helps drive the point home to our opponents that we are here to ensure that the game happens on our terms, and they aren’t favorable terms in any way.

Don't be too proud of this technological terror you've constructed

To round out our starting idea of making a stax based deck with Voltron elements, we need a package of equipment to ensure that our commander is persistently a threat as we recur him. Sword of the Animist, Umezawa's Jitte, Strata Scythe, Sword of Fire and Ice, Sword of Light and Shadow, Nim Deathmantle, and Batterskull do a fine job of offering us useful abilities while keeping our commander pumped up to eliminate our opponents. Let’s look at my final build.

The circle is now complete.

You may notice some noteworthy exclusions, namely All is Dust and Karn Liberated. That is merely a personal preference because of my disdain towards what those cards do for the format. I hate when other people play them against me, so I choose to abstain from using them. That doesn’t mean you have to, however, and I encourage you to hold nothing back if you choose to build this deck. One of the best parts of this build is that you can get creative in terms of what vectors you choose to threaten your enemies on. There’s a wealth of stax based artifacts out there, and each meta is different enough that you can tinker until you create the package that best suits your needs. I really enjoyed this exercise in building without color, and am excited to see what your suggestions or builds look like. Feel free to offer requests for future articles. As always, keep on tapping in the free world.