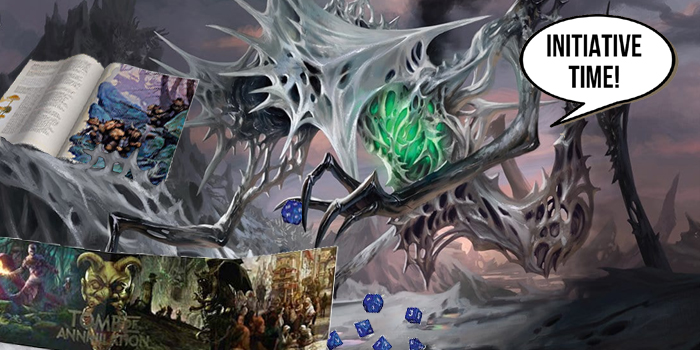 Welcome back to Power Sink, the articles series where we take a look at the campaign villains of Commander and make them suitable for lower-level encounters. Today we're looking at the Monster Manual entry for Yarok, the Desecrated.

Yarok was one of the many powerful legends that came with the release of Core Set 2020. Since then it's led 6,654 decks, making it 32nd overall on EDHREC and the 2nd most popular Sultai commander. As I mentioned in my article on Brago, King Eternal, blink decks can be very powerful, as they're almost giving you two spells in one. Yarok takes this a step further by giving you an additional trigger whenever a permanent entering the battlefield triggers an ability on a permanent you control. This effect not only provides tremendous value, but also opens up some combo lines.

Sultai is arguably one of the best color combination in casual Commander, so Yarok isn't really hurting for much even if it lacks white's blink effects. Plus, being a 3/5 with lifelink and deathtouch makes Yarok quite good at deterring any adventurers that your opponents want to send its way.

Let's delve deeper into what makes Yarok so fearsome by looking at the average deck compiled by EDHREC.

960 of the Yarok decks on EDHREC have the "Lands" theme, and this influence is evident in the average deck. Wood Elves, Springbloom Druid, and Topiary Stomper find lands and notably have their effects doubled by Yarok. Many iconic Landfall cards become much more powerful with Yarok doubling up on them. Scute Swarm and Avenger of Zendikar can flood the board with tokens, Retreat to Hagra can drain your opponents twice as fast, and Tatyova, Benthic Druid will keep your hand full of cards. As great as all this is with Yarok, let's not forget Ancient Greenwarden is there to get yet another trigger.

In addition to Landfall, we see quite a few all-stars from creature-based ETB decks. Mulldrifter, Baleful Strix, and Guardian Project for drawing cards, Acidic Slime, Ravenous Chupacabra, and Agent of Treachery for opposing threats. Peregrine Drake pretty much has a negative mana cost and goes infinite with a few other cards. Panharmonicon works as another Yarok, and we can continue to blink our creatures with Conjurer's Closet, Thassa, Deep-Dwelling, and Deadeye Navigator.

This is all bolstered by a helping of format staples, such as Cyclonic Rift and Rhystic Study.

We've established that Yarok is powerful, now let's throw on a debuff and see if it's easier to hit Yarok's AC.

It's time to gather the party and roll for initiative, because we're turning Yarok into a dungeon deck! As a longtime Dungeons and Dragons player, I've been a fan of the the dungeon mechanic since its debut in Adventures in the Forgotten Realms, but it was largely relegated to Sefris of the Hidden Ways. With the release of the initiative mechanic in Commander Legends: Battle for Baldur's Gate, I believe we finally have enough for a decent dungeon deck when we aren't using a commander that calls for it.

There are sixteen permanents in the Sultai color identity that either venture into the dungeon or take the initiative when they enter the battlefield, and Yarok's additional trigger on these will let you speedrun through dungeons.

Speaking of which, we need to discuss the dungeons to give some context to the deck.

The original three dungeons can get some decent value, but I don't think they're balanced particularly well for Commander. Early on I recommend going into the Lost Mine of Phandelver since it completes quickly and isn't self-destructive like Tomb of Annihilation. We don't want to be stuck in a dungeon when an initiative card comes up, because the best loot is in the Undercity.

The ideal dungeon path for this deck is to get counters at the Forge, drain a player for 5 at the Trap, pick up a card at the Archives, then get a creature at the Throne of the Dead Three. We can diverge depending on our needs, but that's generally what we'll want each time.

Now that our dungeons are mapped out, let's take a look at our deck!

We've cut out the Landfall package and quite a few other cards to make room for our dungeon delvers, and, if I'm being honest, most of them aren't great, but that doesn't mean they're without use! Undermountain Adventurer, Find the Path, and Sarevok's Tome provide mana, so they fit in our ramp package, while Precipitous Drop functions as a removal spell, albeit it a pretty bad one even if it does get us farther into the dungeon.

Aarakocra Sneak, Avenging Hunter, and Underdark Explorer make for decent attackers if we decide to visits the dungeon rooms that place +1/+1 counter on creatures, and while I wouldn't say Vicious Battlerager is a great attacker, I don't see players losing five life to block it. Once we complete a dungeon, Rilsa Rael, Kingpin will give one of our attacking creatures deathtouch, menace, first strike, and +5/+0, making blocking that creature an uncomfortable proposition.

Some of our dungeon cards are a cut above the rest of our explorers, and pose a major threat in this deck. Acererak the Archlich is our most efficient way to get through dungeons. He's only three mana, and since he returns to hand if we don't go through the Tomb of Annihilation, we can continually use him where as we need additional cards to get more from our other dungeon runners. Tomb of Horrors Adventurer is a hefty investment at six mana, but we can expect to complete a dungeon in this deck, and getting extra copies of our second spell is very strong in a deck that leverages ETB triggers like this.

A creature equipped with Trailblazer's Torch will deal two damage to any creature blocking it, and with Yark's deathtouch, blocking creatures are going to die before the damage step. Many opponents will just choose not to block rather than lose a creature, and since many dungeons put +1/+1 counters on a creature, we can make that hit much more painful.

The blink package from the average deck is largely intact, as it supports a dungeon deck as well as it would any other blink deck. Thassa, Deep-Dwelling and Conjurer's Closet are consistent and harder to get rid of, and Deadeye Navigator and Displacer Kitten can potentially blink multiple things in a turn to generate tons of value. Ghostly Flicker and Displace are great for getting an ETB effect at instant speed and make a powerful engine when you can get them back with Eternal Witness. I enjoy that synergy so much I decided to add Timeless Witness and Illusionist's Stratagem.

With that in mind, I want to talk about Danse Macabre. This card can serve as a pseudo-blink spell that also makes our opponents sacrifice a nontoken creature, and if we get back that Eternal Witness, Danse can be back in hand to be used again. Somehow, Danse Macabre shows up in only three Yarok decks on EDHREC.

Since we're likely relying on combat, and quite a few room abilities in dungeons grant +1/+1 counters, we're including a small package to capitalize on that. Tanazir Quandrix is our deck's haymaker. With all the small creatures we're playing and the counters we're throwing around, it's not unreasonable for Tanazir to turn our team into a bunch of 7/7s. We also want some measure of evasion, so we have Pridemalkin and Duskshell Crawler to give trample to creatures with +1/+1 counters. It's a nice added bonus that they give out a counter to a creature as an ETB.

As an afterthought, we have Rancor to give trample to Yarok. Deathtouch and trample is a powerful combination, and being able to attack somewhat freely with Yarok to make use of its lifelink is helpful to give us the time we need to develop our board.

Before I sign off, I think it's important to mention that dungeons add to the already considerable cognitive load of the average Commander game, so if this is the deck for you, you may want to consider a few things before bringing it you your table. In person, having a card for each dungeon a must and an Undercity card for each player is highly recommended. Some player may not want to buy in to using the mechanic, but that shouldn't be for a lack of information that you could have provided. If you're like me and get most of your games on Spelltable, you can put The Initiative//Undercity or any other dungeon into your Partner commander slot.

Personally, I really like who this brew turned out, and I've got an Acererak deck that might just be turning into this, but I'd like to know what you think about this brew and dungeons in general. Are they a critical hit? Let me know in the comments.