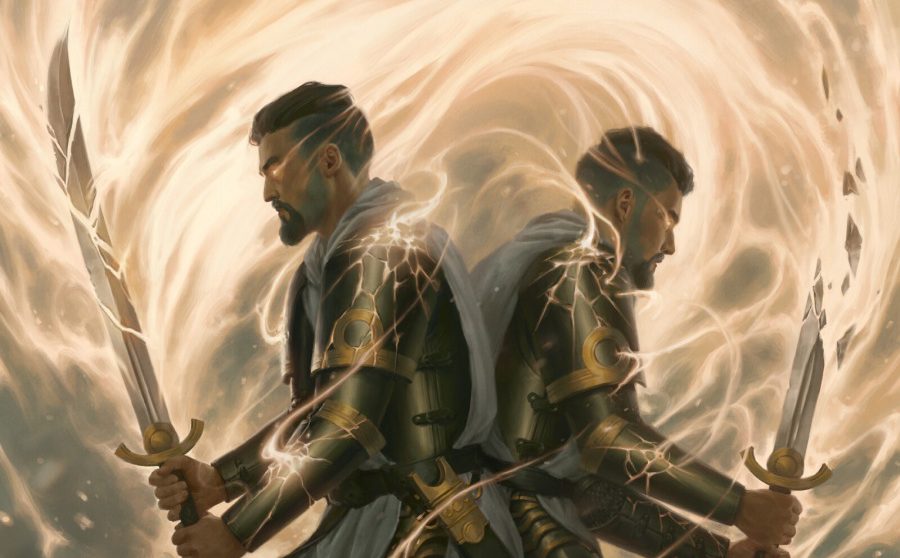 (Brought Back | Art by Mitchell Malloy)

Hello! Welcome to Nearly Identical, a series where I closely examine two commanders with similar designs and archetypes, find out what sets them apart, and help you find your next commander. Today, I'm taking a featuring two Boros commanders that look to make the most of our ETB creatures: Hofri Ghostforge and Duke Ulder Ravengard.

Boros is known for being a combat-centric color identity, but when you're in a four-player game with 120 life to fight through, combat can be a less effective strategy. That's been true up until recently, with Boros getting more interesting commanders, like Osgir, the Reconstructor, that offer something Boros didn't have before: value.

Hofri Ghostforge and Duke Ulder Ravengard both offer value in the form of being able to reuse and copy creatures that have ETB abilities. Give Solemn Simulacrum Myriad, and now you're ramping better than the green players. Have a sac outlet? Hofri can bring back Solemn for a second round.

Based on data provided by MtGDS, Hofri and Duke Ulder have a similarity coefficient of 78%, meaning there's a 78% chance a card found in a Hofri deck can also be found in a Duke Ulder deck. Despite not having similar designs, it's clear that they take advantage of the same package of creatures.

Being able to retrigger ETB effects is what makes blink decks so strong. Sun Titan not only gets back permanents that have been removed, but it also retrieves lands, effectively making it ramp, and Inferno Titan allows you to mow down small creatures or deal the last bit of damage to win you the game. The strongest part about this strategy is taking creatures like Meteor Golem, that have powerful effects but at high mana costs, and being able to reuse that effect for free.

For each of these decks, I want to hone in on what makes them interesting. If Hofri was in Orzhov colors, he'd certainly be considered an Aristocrat commander, so why don't we lean into death triggers and sac outlets and find out what Boros has to offer to rival Orzhov decks? For Duke Ulder, I had a harder time thinking what could be a noteworthy theme, and my first choice of 'Forced Combat' was a harder thing to pull off in Boros than I thought, since white doesn't give us much for that theme. However, I still wanted to lean into things that encouraged combat, so instead, I'm going to call it 'Combat Incentive' and use the Initiative mechanic to push our gameplan.

Let's dive into how our Hofri deck ticks!

Atsushi, the Blazing Sky and Ao, the Dawn Sky both give us value through their deaths. Atsushi provides the choice of either ramp or card advantage upon death, and Ao can cheat in a number of nonland permanents equal to four mana. While that's the mode Ao is most known for, I think its second mode of being able to put two +1/+1 counters onto each creature we control will definitely come in clutch when we need to. Plus, if we sac Ao twice, then everything gets four counters plus the anthems that Hofri provides. What's nice about these two, in particular, is that they're already Spirits, so they'll get Hofri's anthem right away.

Since we're sacrificing creatures, Luminous Broodmoth can bring any creature without flying back and without needing to first be exiled by Hofri first. Broodmoth essentially acts as a second Hofri for our deck, and if we have Broodmoth and Hofri out, we can get up to three ETB or death triggers off one creature. Sure, we've already listed Ao and Atsushi, which do have flying, but there are only six total creatures in the deck that do, so we're not losing out on too much value.

Since we'll be killing a lot of our own creatures, how do we make the most of it?

While Boros is missing out on Aristocrat staples, like Blood Artist and Zulaport Cutthroat, red shores up that crucial part of our gameplan and gives burn. Vicious Shadows is a seven-mana enchantment that says whenever ANY creature dies, deal damage to target opponent equal to their hand size. Cast a board wipe and this will certainly end the game. The Rhystic Study player drawn too many cards? Take them out first! And while you're at it, why not double this effect? Balor can be a second Vicious Shadows on attack and death, giving you a way to burn out an opponent or disrupt their plan by making them draw and discard three cards at random or sac a nontoken artifact. Balor can take an opponent's strategy and stir it all up.

Finally, when one of your creatures dies, Stalking Vengeance will deal damage to an opponent equal to that creature's power, so if we attack and then sac our creatures, it's almost like we're giving them doublestrike. Vicious Shadows and Stalking Vengeance are higher on the mana curve, but this illustrates our intended line of play: attack with our trampling Spirit tokens, then finish off our opponents with burn effects, giving us a one-two that'll end the game quick.

And here's the deck!

So, for the Duke Ulder Ravengard brew, what types of creatures are we looking to give Myriad?

The Initiative mechanic feels like a hot-button topic at the moment. In Commander, players' opinion of the Undercity can range from 'Excited!' to 'Ughhhhhh'. Some call the mechanic too unnecessarily complicated and a lot to keep track of. Personally, I love Initiative. In my experience with it, one player introduces it and it gets bounced back and forth between two players. Eventually, everyone will have taken the Initiative at least once, but typically only two players will have gotten far enough for it to matter. The reason I love this mechanic is the same reason I like goad: incentivizing combat in Commander helps the game move forward, and while I can't have a full-on forced combat Duke Ulder deck, we can at least encourage combat.

All of the creatures that have Initiative take it on ETB, s0 with Duke Ulder, whenever we give one of those creatures Myriad, we'll be venturing twice into the Undercity, plus the initial time that creature had entered, and since there are only five rooms in the Undercity, on the next turn, we can just enter combat again, complete the dungeon, and cheat out a creature from the top ten cards of our library.

Since we're able to complete the dungeon so easily, we'll benefit greatly from the alternate effects that creatures like Caves of Chaos Adventurer provide. Whenever she attacks, we can now cast spells for free off the top. Even if we haven't completed the dungeon, she still provides us card advantage. Additionally, White Plume Adventurer lets us untap all our creatures if we've completed the dungeon. I'd be remiss if I didn't mention Seasoned Dungeoneer, which I knew would be a sleeper card when I reviewed it in my Party Time Precon Review, and now it's $10. I just didn't think it would've been Legacy that would bring that to light.

Besides Initiative, how else are we encouraging combat?

Vengeful Ancestor is actually why I wanted to build Duke Ulder as a forced combat deck to begin with. Having goad on ETB and attack means we can goad up to three creatures a turn with it. We win the game through combat, so what better way to get that done than to have our opponents' creatures work for us instead? Vengeful Ancestor also has a second ability that deals damage to the controller whenever their goaded creature attacks. My dream goal is to win a game with the Ancestor and cast a Disrupt Decorum and deal damage just for my opponents attacking.

Before Initiative, another popular mechanic in Commander that encourages combat is the Monarch, and the best card to showcase that in Duke Ulder is Emberwilde Captain. We don't get any additional benefit if we give the Captain Myriad but what it does do is discourage combat towards us, as we deal damage to our opponents if they do. Once the Monarch is out there, players will be incentivized to hit each other instead of us if it means getting the crown.

The last bit of combat incentive we have is Coveted Jewel. Why send your trample creature over at me if Player B has the Jewel? Wouldn't you like to draw three? It's risky to give opponents that much value, but since we're a combat deck, we can simply take it back whenever we want.

Of these two commanders, Hofri Ghostforge is more popular, with 1,700 decks. Duke Ulder Ravengard, on the other hand, only has 900 decks. While Hofri came out in Strixhaven (wait, how long ago was that? That was this year, right?), I don't think Duke Ulder will outrank Hofri anytime soon. For one, Duke Ulder is six mana in Boros, and he relies on combat to win, which turns players away (for some reason). Meanwhile, Hofri provides value in a way many Boros commanders haven't been able to do before.

Strixhaven truly reinvented the red/white color pairing, giving it interesting ways to get value by reanimating creatures and artifacts. Hofri didn't get as much attention as Osgir, the Reconstructor did (and it shows, given he's now the top Boros commander), but I think he's a fairly unique commander that has the opportunity to branch out into multiple themes. Honestly, I like Duke Ulder as well. He's clunkier, but Myriad provides combat-focused decks a way to scale to the multiplayer scene, so I think in terms of strategies that rely on attacking, this one is a step in the right direction.

What do you think? Would you rather reanimate your creatures for value or copy them in combat with Myriad? Let me know in the comments below!