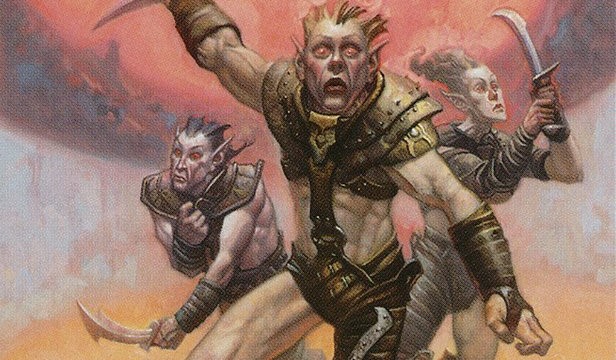 Welcome to the first (real) installment of Reconstruct History, where we look to examine popularity trends in cards over time, specific to the Commander format.

If you're curious about how we are going about this process, or maybe you just want to read up a little more on archaeology, history, and its crossover with this series and Magic: The Gathering more broadly, I encourage you to check out the first installment. Otherwise, hold onto your butts. We're starting off with a big'un'...

Touted as the finisher for many a red deck back in the day, Insurrection is the ultimate haymaker. It made it as #9 on Jimmy Wong's and #6 on Josh Lee Kwai's top 10 Red cards back in 2015. Emma Handy, guesting on the Tolarian Community College as recently as January 2020, listed Insurrection as a possible finisher and win con to her control deck. It's undoubtedly a powerful card, and has an entrenched legacy in the Commander format.

But what about today? What's the trend been like for Insurrection the last couple years? Is it still the broadly adopted bomb? Let's Learn from the Past and find out!

Let's outline what exactly we'll be looking at:

We'll be primarily analyzing the color-specific rank score here rather than the raw number of decks it's included in for a few reasons. See the previous installment if you want more background, otherwise I'll quickly summarize here:

As a quick note, looking at rank can be kind of counterintuitive, as 'higher' rank cards actually have lower numbers (e.g., Mountain is techincally the most played card in red decks, so it has Rank 1. Chaos Warp being the second-highest has Rank 2, etc.). In other words, the larger the rank number, the lower it is in terms of popularity compared to other cards of the same color. I'll put a little scale on the right side of each graph to help clarify.

Without further ado, the red-specific rank score for Insurrection over the last two years can be seen here. I've added a regression line (red) and error range (gray)¹, which helps illustrate even further the trend downwards for Insurrections popularity compared to other red cards: 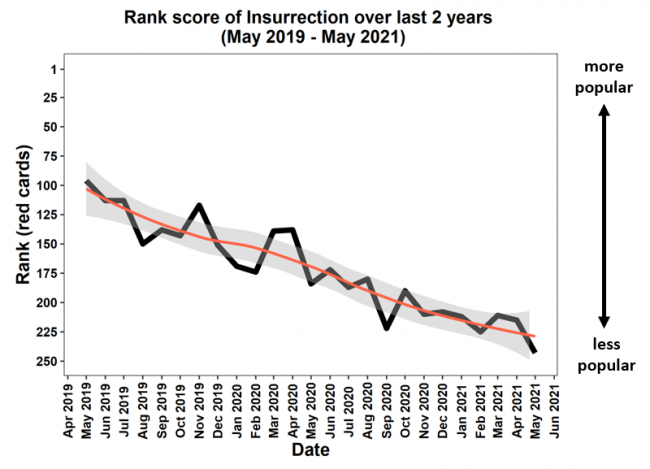 While a bit jagged, Insurrection's popularity does appear to be declining here. We notice a few 'peaks' in Insurrection's popularity around November of 2019 and March-April of 2020, as well as a few 'dips' in July 2019, February 2020, and September 2020. While I think most of this may just be genuine noise, the February-May 2020 uptick may well represent a general uptick in players, as that's after the commencement of the COVID-19 pandemic, and coincided with numerous stay-at-home orders around the world, and possible upticks in brewing.

Additionally, we see it crop up in 96 lists for Obeka, Brute Chronologist, the second-most popular commander from the 70+ legendary creatures from Commander Legends. The set released in November of 2020, but she was spoiled in October 2020. Unfortunately, due to the wording of Insurrection, Obeka cannot circumvent the card to permanently keep all creatures (for a proper rules explanation, see Charlotte Sable's excellent article here!). While it may be included due to its reputation as a canonical closer, it is perhaps unfortunate to see that Insurrection's highest spike in inclusions in the last few years may well be due to a rules misunderstanding.

Finally, we can look at the number and percentage of times Insurrection fell within a particular category from the months scraped above, making sure we don't double count any previous categories (i.e., not counting top 100 again in the top 150):

In due time, Insurrection may well cross the 300+ rank threshold. For now, it seems to be shifting that way, but has managed to keep to the ~200s for the last year.

With all that out of the way, it's Time to Reflect and Reconstruct some History!

Off the bat, the price trend for Insurrection is worth noting. Since 2016, it's sat squarely above $5, and surpassed the $10 threshold as of 2021. As of now (June, 2021), it's closing on $20, and even passing it in some cases. With a limited printing in only Onslaught (2002), Planechase (2009), and the original Commander product (2011), its pricetag may well have caught up with its reputation as a format 'staple' or 'finisher.' Insurrection's decline in popularity may well coincide with its inaccessibility.

The decline in Insurrection may also be indicative of broader changes in the format. There's been a general tendency to trim the proverbial fat off of Commander decks in the last few years, whether it's substituting your Commander's Spheres for Arcane Signets, or your Putrefys or Mortifys for Assassin's Trophys or Desparks. For many nowadays, a conditional haymaker with a mana value of nine just seems too steep.

Additionally, the card can be both meta- and deck-dependent. It pales against creature-light decks, and can flop against decks that have instant-speed sacrifice outlets, such as aristocrat strategies, which just seem to get more and more popular by the day. Sure, casting Insurrection can force them to sacrifice their board to deny you from getting access to them, but isn't that what they wanted to do anyways?

And just look at the slough of "Top X Red cards in EDH" style videos made in the last year or so, and you'll notice Insurrection appears on none of them. Head on over to EDHREC's top Red cards, and your scroll finger will have to do a hefty workout just to get down to where Insurrection is today — literally behind Burning Inquiry. I venture few players back in 2015 praising Insurrection would think it would fall behind Burning Inquiry in popularity one day. I know I wouldn't have!

I also think it's worth mentioning the playstyle of Insurrection. Even in the most effective of cases, it can sometimes lead to a sort of 'sneaky' victory. Sometimes, it can lead to hilarious stories and blowouts, or end a game that just desperately needed to end. After all, it lets people resolve their creatures and lets them play, right? But on the other hand, it can sometimes lead to a deflated loss for the opponents of the Insurrection player, as they developed and stabilized their boards only to have victory wrenched away while the player with little board who looked fairly innocent and was left alone got to nine mana and subsequently beat everyone. With their own creatures.

While I'm not bagging on those who play Insurrection, I'm simply suggesting it may not be everyone's cup of tea. It might even be proportionately fewer people's cup of tea nowadays than it was in 2015. In Commander, expression goes a long ways, and it may well be that many people just prefer to win on their own terms rather than with their opponents'.

Which brings me to my last point: there's a lot more options nowadays for enablers, haymakers, and finishers for red-inclusive decks compared the days of old. Think Chandra's Ignition, Crackle with Power, Jeska's Will, you name it. There's even a new kid on the block in Spreading Insurrection, which features a similar artistic theme and mechanic, but with the fun of Storm, Magecraft synergies, and Ixalan-themed art to boot.

Take Mizzix's Mastery as an example. Mizzix's Mastery is another big-mana-value red haymaker that has been around for a while (Commander 2015), and with enough set-up can be an outright finisher. Sure, it's conditional, but so is Insurrection, and you don't have to rely on your opponents to win. Unlike Insurrection, Mizzix's Mastery's price has trended down, thanks to numerous reprints in Mystery Booster (November 2019 for Convention Edition, March 2020 for Retail) products and Strixhaven: School of Mages (April 2021).

We can see how Mizzix's Mastery has shaped up against Insurrection here: 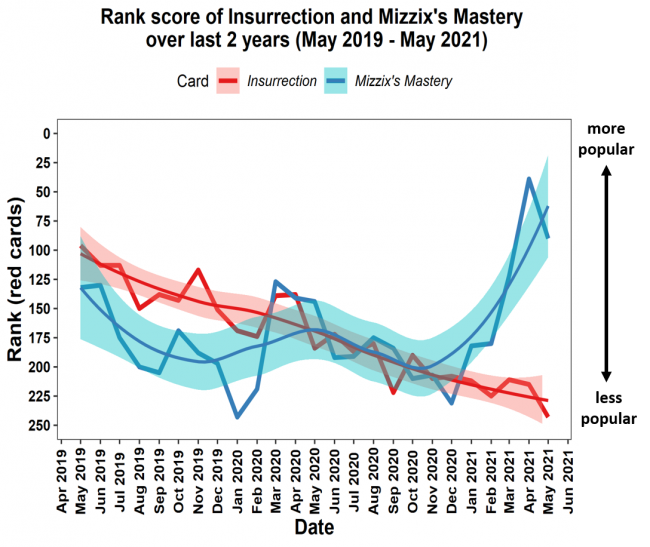 While I'm not suggesting people one-for-one swapped out their Insurrection for Mizzix's Mastery, it may well be that cards like Mizzix's Mastery are a juicier option for some people nowadays, especially since it's less dependent on opponents and more synergistic with your own deck's gameplan (just look at that spike with Strixhaven, and Josh Lee Kwai's insane turn with it on Game Knights ep. 44!). As old and canonical as Insurrection is, maybe people are just bored of using it, and have moved on to other options.

As always, there's likely never any one factor, but a myriad of possible variables that co-influence the trends we see in the past and present. I think Insurrection is still perfectly playable, but does require price, meta, and playgroup considerations, at a minimum. Whatever the reasons, what was once a top-10 finisher is likely well on its way to transitioning into retirement for many deckbuilders, which means I'm classifying Insurrection under the category Lost Legacy, or cards that were once the hot buzz and nowadays many may consider yesterday's news. 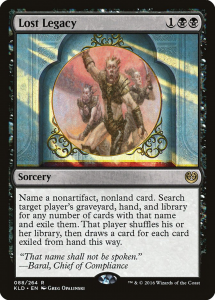 I'd love to hear your thoughts. What factors do you think might contribute to the trends above? Where do you fall on Insurrection? Do you see it as a Lost Legacy, or a staple here to stay? Sound off in the poll and comments below!

Finally, a big shoutout to Nate Burgess (@MisterPlorg) here at EDHREC for all the data scraping from our archives.