Let's Get to Digging

Welcome to the debut of Reconstruct History, a series where we aim to look at popularity trends in cards over time, specific to the Commander format. Whether you're interested in what's hot, what's not, or what's fallen by the wayside, thinking about the effects of power creep or even content creation may have on card popularity, I hope this series will have something for you!

Before we kick off the series with the data, I thought it might be a good idea to get a basic framework out of the way in this first article. That way, if people want to see what this series aims to do and dig a little deeper (yes, archaeology pun intended, brace yourself for many more), they can do so here, but that way we also don't have to add additional paragraphs every time. Plus, I think there's some value in looking at some of the history behind this framework, and how this series' namesake fits in with the larger arch of history, archaeology, and popularity in Magic and beyond!

And if you haven't already, please check out the EDHRECasts episodes 124 ('Commanders that People Stopped Building') and 132 ('Late Bloomer Commanders')! These are great, informative episodes that look at popularity trends in commanders, and they inspired much of this series.

Perhaps it's no coincidence that white (and red) see a return to archaeology in Strixhaven's Lorehold college, the very school of historical and archaeological inquiry. Even as early as 1994 in the flavorfully named set, Antiquities, white showed the possibility of linking artifacts with recursion through archaeology, seen in none other than the Argivian Archaeologist (and yes, it does shock me that it costs more than the average radiocarbon date sample, but let's leave a history/analysis of the Reserved List to someone else...)

While we've seen some archaeo-adjacent cards throughout the decades that interact with artifacts, such as Argivian Find (Weatherlight, 1997), Goblin Archaeologist (Darksteel, 2004), Daring Archaeologist (Dominaria, 2018), and Ardenn, Intrepid Archaeologist (Commander Legends, 2020), they're but sporadic fragments of the larger Magic mosaic of cards out there.

Blue, too, seems to show some minor references in cards like Argivian Restoration (Weatherlight, 1997), Excavation (Prophecy, 2000), Sacred Excavation (Amonkhet, 2017), and Mystic Archaeologist (Core Set 2019; 2018). Blue has undoubtedly always had a strong affiliation with artifacts, and red's affinity for scrapping (Scrap Mastery), repurposing (Trash for Treasure), and metal-working (Goblin Welder) has also positioned it as a strong artifact color.

Which brings us to 2021, where the release of Strixhaven: School of Mages brought about a fundamental change in how red and white (Boros, but really Lorehold!) can work together while still keeping to the flavor, mechanics, and color identity they've had for decades. To me, Lorehold's 'archaeology' flavor with the graveyard and artifacts feels right at home — it just took a long while to become fully flushed out.

With that historical tidbit out of the way, let's dig into what this series is all about: popularity in Magic cards over time. In true Lorehold fashion, we're employing an historical-archaeological approach. Historical archaeology, much like other forms of archaeology, is poised to examine trends over time, but it has the benefit of synthesizing archaeological materials with historical and archival sources to compare and contrast how such datasets might shed light on one another.

One of the greatest examples of historical archaeology's potential for analyzing popularity trends can be seen in James Deetz's canonical classic In Small Things Forgotten: An Archaeology of Early American Life, first published in 1977. Analyzing changes in Headstone iconography over 18th-19th century New England cemeteries, Deetz was able to graphically depict how changes in religious ideas about death and cemeteries coincided directly with the popularity in headstone motifs (Deetz 1996: 97): 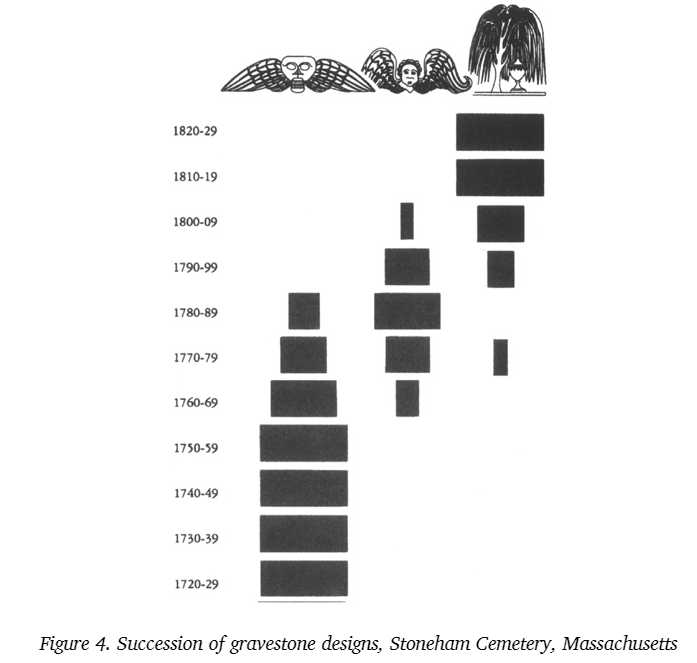 Unlike your traditional temporal graph, which often puts 'time' on the X-axis, these 'battleship graphs' (so named for the shapes they often produce) tend to invert 'time' to the Y-axis, and use the width of each bar to represent popularity. The graph shows that over time (moving from bottom to top), the 'death's head' (skull with wings, left-most column) was beginning to diminish in the latter half of the 18th century, just as the 'cherub' (baby-face with wings, middle column) increased in popularity. The cherub replaced the death's head, but its own popularity was short-lived, lasting only some 50 years. It was eventually replaced by the 'urn and willow' design (right-most column), which replaced the winged heads altogether, and continued to be the preferred style into the 19th century.

By synthesizing these data with historical, archival, and other material sources, Deetz was ultimately able to effectively demonstrate how religious changes surrounding death in colonial New England actually leaves material traces and evidences for us as observers some centuries later. Walking through an 18th century Woodland Cemetery, you might not notice popularity trends off the bat by looking at the Wall of Tombstones in front of you. But if you carefully organize them chronologically, and in relation to one another, patterns begin to emerge.

Which brings us to this series: similar prospects may well hold for Magic cards, particularly in a booming format like Commander. A look at any card on EDHREC may give you an inclination of the card's popularity, and heck, maybe even power. But what about that card tomorrow? Next week? Six months from now? A year? Or what if we flip it and ask: how popular was it six months ago? A year ago? Furthermore, how might it fare when compared to the introduction of other cards? How might its popularity be explained in relation to other cards? Looking at a card's popularity over time can shed light on it in relation to broader broader aspects of the format, like power creep, popularity, and even content creation.

Grapple With the Past

Looking at that Figure 4 above, you might be asking yourself "Okay, that's all neat and all, but what about headstones before 1720? What about after 1830? What happened in 1780-89 to make a gap in the 'Urn and Willow' bar missing altogether? Did it truly just fall out of favor for a decade, or is the data missing for some other reason?"

Seldom does the archaeologist or historian have full access to a complete temporal dataset, as historical datasets are often patchy at best. Maybe the cemetery was abandoned after 1830. Maybe they ran out of space. Maybe the archives burned down, such as the 1921 building fire, which happened to burn all but a small portion of the 1890 U.S. Federal Census Records. Such mundane things often Cascade, Apex Devastator-style, into gaps in knowledge, but that doesn't negate their utility nor interpretive power!

Which brings us to another aspect of Reconstruct History: we'll only be looking at 'snippets' or 'snapshots' in data trends. For the most part, we'll be:

Regarding Criteria #1, two years should give us a good enough window to peek at trends, while also acknowledging that EDHREC purges data from lists that haven't been updated or maintained in the last two years. Additionally, given the increased volume of product released in recent years, keeping most of our scope to the last two years should keep us 'up-to-date' on what the recent trends are. In some cases, we may be able to get data further back, but we'll do it on a case-by-case basis. Criteria #2 is somewhat related. While we lose some granularity by aggregating by month (rather than, say, by week), it should help us smooth some temporal trends while still giving us the resolution we need.

For Criteria #3, looking at increases or decreases for cards that see little play to begin with might not shed as much light on the larger format as we'd hope . Quagmire may well see a 100% increase in popularity one day, but considering that it still only sees play in 1 deck, that's just a level of granularity we aren't going to look at. Rather, we'll try and look at what is the card du jour that people are scrounging for and if/when that may change.

As for Criteria #4, it turns out that some issues can arise when we just look at the number of decks a card is included in (decklists), rather than a card's rank score (i.e., its popularity compared to other cards of the same color(s)).

Take the card Insurrection, which we'll be looking at in the next installment. It saw inclusion in 178 decks in the month of April 2019, compared to the more than 10,000 lists scraped that month, or < 2%. This problem exacerbates over time, as the recent deluge of products, new cards, precons, deck-building platforms, content creators, and general increase in player base means that the influx of decklists are booming. Tracking 0.001% fluctuations in popularity can just get a bit too zoomed-in at times. As such, we'll likely default to rank, but consult trends in decklist numbers as needed!

This wraps up a bit of our framework, but stay tuned for the next installment where we'll actually be looking at the data!

And finally, I just want to give a huge preemptive shoutout to Nick Burgess here at EDHREC (@MisterPlorg on Twitter), who will be helping with the nuts and bolts of pulling and scraping large amounts of data from our EDHREC archives.

And let me know: Are there any cards you'd be interested in seeing? Do you find Lorehold's mechanics and flavor in respect to its color identity out of left field, or something a long time coming? What headstone motif is your favorite? Sound off in the comments below!